In the present study, ethanol and aqueous extracts of leaf galls of Cinnamomum verum were prepared to evaluate the antioxidant activity using 2,2-diphenyl-1-picrylhydrazyl free radical scavenging assay and superoxide radical scavenging assay with ascorbic acid as a standard, and analgesic activity by tail immersion test and acetic acid-induced writhing test methods using diclofenac sodium as the reference drug. Swiss albino mice maintained under standard laboratory conditions were used for analgesic tests. In the 2,2-diphenyl-1-picrylhydrazyl assay it was found that the aqueous and the ethanol extract possessed almost equal capacity to inhibit free radicals (IC 50 =13.3 and 13.53 µg/ml) but found less than ascorbic acid (IC 50 =9.96 µg/ml). And in superoxide assay the ethanol extract was found to be more potent in scavenging super oxide radicals when compared to ascorbic acid and the aqueous extract (IC 50 =237.1 and 197.8 µg/ml) with the IC 50 =119.7 µg/ml. For analgesic activity, ethanol extract showed the maximum time required for response against thermal stimuli (6.75±0.47 s) and maximum % of writhing inhibition (44.57%) when compared to aqueous extract (5.25±0.48 s and 32.61%), whereas diclofenac showed response in 7.25±0.25 s 67.39% inhibition in tail immersion and writhing tests, respectively. These results demonstrate that the ethanol extracts of leaf galls possessed high antioxidant and analgesic activity.

Cinnamomum zeylanicum Blume syn. C. verum J. Presl, Lauruscinnamomum L. commonly called as Cinnamon is an evergreen tropical tree, belonging to the Lauraceae family. Cinnamon barks and leaves are widely used as spice and flavoring agent in cookery and various applications in medicine [1]. Leaf oil and bark oil are used in manufacture of perfumes, soaps, tooth paste, hair oils and face cream and also as an agent for flavoring liquors and in dentifrices [2]. Traditionally it is used to treat bowel complaints such as dyspepsia, flatulency, diarrhea and vomiting, digestive disturbances/ digestive complaints such as mild spasms/cramps of the gastrointestinal tract/gastrointestinal colic, feeling of repletion/bloating, and flatulence/carminative [3].

Although cinnamon is a hard plant, is subjected to variety of pests and diseases during its different degrees of development. Galls are one of the major types of abnormality seen in cinnamon [4]. Literally gall is an abnormal swelling of plant tissue caused by insects, microorganisms, or external injury. In cinnamon, galls are mainly caused by Trioza cinnamom (insect) and Eriophyes boisi (mite) [4]. Generally galls have been known to contain bioactive compounds [5]. Numerous studies have examined the biochemical composition of gall tissues both from the nutritional and defensive points of view [6-8]. In this context, an attempt has been made to explore the antioxidant (used to preventing the oxidation of molecules) and analgesic (used to achieve analgesia) potential of aqueous and ethanol extracts of Cinnamomum verum leaf galls by in vitro and in vivo methods, respectively.

The plant materials were collected from the horticulture nursery, GKVK, Bangalore. The plant material was authenticated and few authentic samples (Nveni-1) were preserved in department of biotechnology, Dr. S. G. Reddy College, Bangalore. Fresh plant material was collected in bulk. The galls were separated from the leaves and cleaned with water. To remove adhering water the galls were dried under the shade and galls were grinded by using electric grinder. The gall powder was extracted with ethanol in a Soxhlet extractor at a temperature ranging between 60-70° for the period of 5-8 h to obtain to spent. After extraction the extract was separated from Soxhlet, and then the extract was concentrated and converted into syrupy mass and finally into dried mass. Aqueous extract was prepared fresh.

The study was carried out on albino mice maintained under standard laboratory condition of food and water. The animals obtained from National Institute of Mental Health and Neurosciences, Bengaluru (Reg. no. 12/99/CPCSEA). All the experiments were carried out between 0900 and 1700 h according to the Guide for the Care and Use of Laboratory Animals [9]. Twenty-four hours before the experiments they were transferred to the laboratory. The animals were fasted overnight prior to the acute experimental procedure.

2,2-Diphenyl-1-picrylhydrazyl (DPPH) scavenging activity of plant extracts was measured by the spectrophotometer according to the method of Pan et al [10]. One milliliter of DPPH solution in ethanol is mixed with 100 ml of plant extracts at various concentrations (5, 12.5, 20, 30 and 45 μg/ml). After 30 min of incubation period at room temperature, the optical density of which was measured at 517 nm. The optical density of the samples, control and blank was measured and ascorbic acid was used as standard and IC50 was calculated. Percent DPPH radical scavenging activity (%S) was calculated using the formula, %S=(Ac-At)/Ac)×100, where, Ac is the absorbance of the control (DPPH solution) and At is the absorbance of test samples. All tests were performed in triplicate and results were expressed as mean±SEM.

Superoxide free radical was formed by alkaline DMSO, which reacts with nitrobluetetrazolium NBT to produce colored disformazan. Superoxide radical scavenging activity of plant extracts were measured according to the method explained by Sanja et al. [11]. Various concentrations of DMSO was added to plant extracts of various concentration (100, 200, 300, 400 and 500 μg/ml) and then 0.1 ml of NBT and 1 ml of alkaline DMSO was added. Then samples were incubated at room temperature for 5 min, and the absorbance was recorded at 560 nm against a control in which pure DMSO has been added instead of alkaline DMSO and ascorbic acid was used as standard. IC50 was calculated and percent of superoxide radical scavenging activity (%SA) was calculated using the formula, %S=(At-Ac)/At)×100, where, At is the absorbance of the test sample and Ac is the absorbance of the control. All tests were performed in triplicate and results were expressed as mean±SEM.

Prior to analgesic experiments, the animals were screened for the sensitivity test by immersing the tail of the mice gently in hot water maintained at 55-55.5°. The animal, which removed the tail from hot water with in 5 s was selected for the study. The selected animals were then divided in to four groups of four animals each. Group IV and III received the ethanol and aqueous extracts in 2% w/v DMSO in normal saline intraperitoneally (ip) at a dose of 600 mg/kg. Group II received diclofenac sodium (100 mg/kg) and Group I received distilled water (10 ml/kg) in normal saline manner. After administration of the drugs, the reaction time was measured at 0, 15, 30 and 45 min interval and the reaction of animals considered as post drug reaction time. The maximum reaction time was fixed at 10 s.

Analgesic activity of the samples in mice was evaluated using acetic acid induced writhing. The selected animals were divided in to four groups of four animals each. Abdominal constriction was induced by 1% v/v glacial acetic acid solution (2 ml/kg) in mice; 5 min after the injection of plant extract and standard drug. Group I (control) received 10 ml/kg distilled water orally. Group II received diclofenac sodium-reference drug (100 mg/kg), and group III and IV received aqueous and ethanol extracts at 600 mg/kg respectively. Each animal was placed singly in a glass cylinder and the number of writhings (A writhe is indicated by a wave of abdominal constriction and full extension of hind limb) was counted over a period of 20 min, 5 min after acetic acid injection. The result was expressed as the total number of writhes observed during 20 min and is expressed as writhing numbers.

All results obtained in the DPPH assay, the superoxide assay, the tail immersion and the writhing tests were analyzed for statistical significance using the one way analysis of variance (ANOVA) and IC50 was estimated using statistical software Graph pad prism version 6.03. Graphs were also ploted where bneeded using the same software. Data were expressed as mean±SEM for triplicate determinations or for a sample size of n=4. A P<0.05 was considered significant.

Free radicals and other reactive oxygen species including superoxide anion radicals, hydroxyl radicals are known to involve in the process of lipid peroxidation and play a cardinal role in numerous chronic diseases such as cancer and coronary heart disease [12]. They are also well recognized for playing dual role as both deleterious and beneficial species in living systems [13]. Thus the ability of antioxidant is to scavenge free radicals is an important property in order to reduce oxidative cellular damage. In past decades, researches have been focused to identify the level of antioxidant potential in several plant extracts, which will be further helpful in the formulation of herbal drugs in treating chronic disease. The results of DPPH and superoxide assay are detailed below.

DPPH assay is widely used to investigate antioxidant activity. DPPH Free radical scavenging activity of ethanol and aqueous extracts is represented in fig. 1. Both the extracts were found to be having similar DPPH free radicals scavenging capacity. The IC50 values of ethanol extract and aqueous extract are 13.53 and 13.3 μg/ml, respectively. The lower value of IC50 is considered to represent greater antioxidant activity. But the values of extracts were less when compared with the IC50 of standard ascorbic acid (9.96 μg/ml). The decrease in absorbance of DPPH caused by antioxidants is due to the reaction between antioxidant molecules and radical, which results in the scavenging of the radical by hydrogen donation [13]. 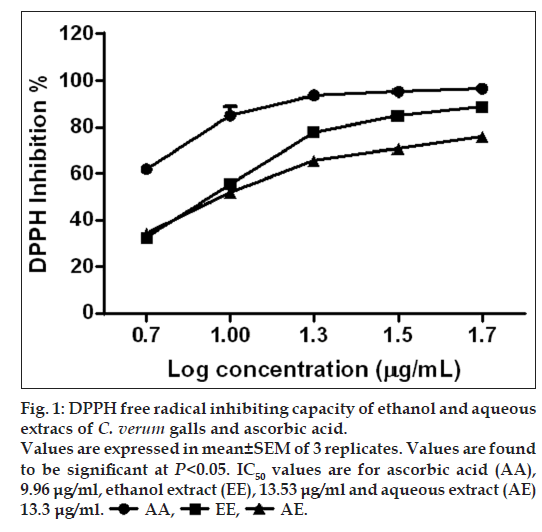 Superoxide radical is known to be very harmful to cellular components as a precursor of more reactive oxidative species, such as singlet oxygen and hydroxyl radicals. Furthermore, superoxide radical is considered to play an important role in peroxidation of lipids [13]. Hence, it is considered as important to study superoxide-scavenging activity using C. verum leaf galls extract. Lower value of IC50 is considered as higher the antioxidant activity. Ethanol extract of C. verum leaf galls showed a remarkable superoxide scavenging activity (IC50=119.7 μg/ml) when compared to the aqueous extract or ascorbic acid (197.8 and 237.1 μg/ml, respectively). Superoxide scavenging activity of ethanol and aqueous extracts is represented in fig. 2. 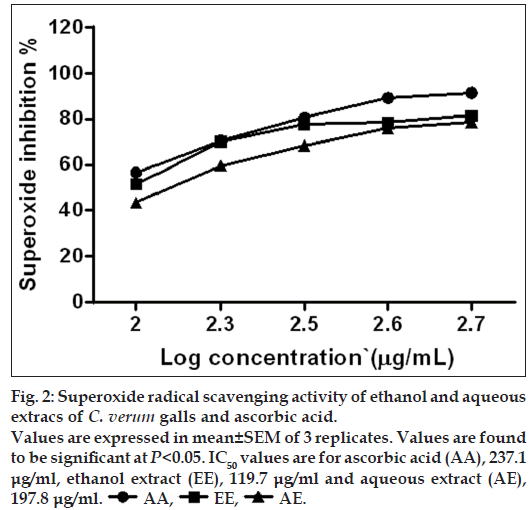 Analgesics are those drugs that mainly provide pain relief. Pain is an unpleasant sensory and emotional experience associated with actual or potential tissue damage, or described in terms of such damage [14]. Though, analgesics provide symptomatic relief, but have no effect on the cause [14]. The results obtained from tail immersion test and acetic acid-induced writhing test are summarized below. In the tail immersion test, ethanol extract of C. verum leaf galls showed remarkable analgesic activity when compared to aqueous extract at a dose of 600 mg/kg. But, it was found less when compared to standard diclofenac sodium at 100 mg/kg (Table 1). All values at 30 min and 40 min were found to be significant at P<0.05 when compared control.

All values are expressed in mean response in seconds±SEM (standard error of mean, n=4); *Values are found to be significant at 5% P<0.05 when compared to control. aDunnett’s test

All values are expressed in mean writhing numbers in 20 min±SEM (standard error of mean, n=4); *Values are found to be significant at P<0.05 when compared to control. aDunnett’s test

We thank the lecturers and lab technicians for their guidance and help in conducting experiment and our family members for their financial and moral support.