Among various dosage forms, matrix tablets are widely accepted for oral controlled release as they are simple to formulate and easy to make. Polymers and release retarding materials used as matrix play a vital role in controlling the drug release from the matrix tablets. Though a variety of polymeric substances are available to serve as release retarding matrix materials, there is a continued need to develop new, safe and effective release retarding materials for matrix tablets. Natural gums and polysaccharides and their derivatives represent a group of polymers widely used in pharmaceutical dosage forms due to their non-toxicity, low cost and free availability. Natural gums are hydrophilic polymers and when in contact with water, they are hydrated to form a gel. Because of this property natural gums like gum karaya, xanthan gum and guar gum have been reported [1] as good matrix materials for controlled release tablets. Olibanum is a gum resin obtained from Boswellia serrata, Roxburgh and other species of Boswellia. Olibanum consists [2] chiefly of an acid resin (56-60%), gum or carbohydrate (30-36%) and volatile oil (3-8%). The resin contains [3] mainly a resin acid (boswellic acid) and a resene (olibanoresene) in equal proportions. In the present work olibanum and its resin and carbohydrate fractions were evaluated as rate controlling matrix materials in tablets for controlled release of diclofenac.

Diclofenac is an effective analgesic, antiinflammatory drug. It has a short biological half life of 2 h [4]. The drug also causes GI disturbances, peptic ulceration with bleeding if present in large doses in GI tract [5]. Hence, diclofenac is a suitable drug for oral controlled release tablets and it would be advantageous to slow down its release in GI tract not only to prolong its therapeutic action but also to minimize possible side effects of diclofenac. A few sustained release products of diclofenac are available commercially.

Preparation of resin and carbohydrate fractions of olibanum

Powdered olibanum (10 g) was extracted repeatedly with 4×50 ml quantities of solvent ether. The ether extracts were collected in a porcelain dish and concentrated to dryness at 40° to obtain the resin fraction. The dry mass was powdered and the size was reduced to 200 mesh. The carbohydrate fraction remained after ether extraction of the resin was collected, dried at 60° for 4 h and the size was reduced to 200 mesh.

Matrix tablets of diclofenac were prepared by conventional wet granulation method as per the formula given in Table 1. The required quantities of medicament and matrix materials were mixed thoroughly in a mortar by following geometric dilution technique. The binder solution (mixture of alcohol and purified water at 3:7 ratio) was added and mixed thoroughly to form a dough mass. The mass was passed through mesh no. 14 to obtain wet granules. The wet granules were dried at 60° for 4 h. The dried granules were passed through mesh no. 14 to break the aggregates. Talc and magnesium stearate were passed through mesh no. 100 on to dry granules and blended in a closed polyethylene bag. The granules were compressed into tablets on a rotary multi-station tabletting machine (Cadmach Machinery Co. Pvt. Ltd., Mumbai) to a hardness of 7 kg/sq.cm. using 9 mm round and flat punches.

Diclofenac content of the tablets was estimated by UV spectrophomeric method based on the measurement of absorbance at 276 nm in phosphate buffer of pH 6.8. The method was validated for linearity, precision and accuracy. The method obeyed Beer’s Law in the concentration range 0-10 μg/ml. When a standard drug solution was assayed repeatedly (n=6), the mean error (accuracy) and relative standard deviation (precision) were found to be 0.6 and 0.8%, respectively.

Hardness and friability of the matrix tablets formulated were evaluated using a Monsanto hardness tester and a Roche friabilator, respectively. Disintegration time of the tablets was determined in Thermonic tablet disintegration test machine using purified water, 0.1 N hydrochloric acid and phosphate buffer of pH 6.8 as fluids.

Release of diclofenac from the matrix tablets was studied in phosphate buffer of pH 6.8 (900 ml) using USP XXIII-3 station dissolution rate test apparatus (Model DR-3, Campbell Electronics) employing a basket stirrer at 50 rpm and at 37±1°. Samples of 5 ml of each were withdrawn at different time intervals over a period of 24 h. Each sample withdrawn was replaced with an equal amount of fresh dissolution medium. Samples were suitably diluted and assayed at 276 nm for diclofenac using a Shimadzu UV-150 double beam UV-spectrophotometer. For comparison, diclofenac release from Voveran SR tablets was also studied. The drug release experiments were conducted in triplicate.

Olibanum and its resin and carbohydrate fractions were evaluated as matrix materials for oral controlled release tablets of diclofenac. Matrix tablets each containing 100 mg of diclofenac were prepared employing olibanum gum at 1, 2, 5 and 10% w/w concentration in the formula. All the matrix tablets prepared were found to be non-disintegrating in water, 0.1 N HCl and phosphate buffer of pH 6.8. Hardness of the tablets was in the range of 6-7 kg/sq.cm. Percent weight loss in the friability test was found to be less than 0.2% in all the cases. All the matrix tablets contain diclofenac within 100±5% of the labeled amount. As such all the batches of matrix tablets prepared were of good quality with regard to hardness, friability and drug content.

Diclofenac release from the matrix tablets was studied in phosphate buffer of pH 6.8. The release profiles are given in fig. 1. Diclofenac release from all the matrix tablets prepared employing olibanum was found to be slow and extended over longer periods of time. Drug release was depended on percent of olibanum contained in the tablets. As the percent of olibanum was increased, release was decreased. The release data of matrix tablets were fitted into various mathematical models (zero, first, Higuchi’s square root and Peppas equation) to evaluate the kinetics and mechanism of drug release from the tablets. The model that best fits the release data is selected based on the correlation coefficient (r) value in various models. The model that gives high ‘r’ value is considered as the best fit of the release data. The ‘r’ values in zero, first order and Higuchi models are given in Table 2. The results given in Table 2 indicated that the drug release from the matrix tablets followed first order kinetics. The corresponding first order release rates (K1) were calculated from the slope of the linear regressions and the K1 values are given in the Table 3. As the proportion of olibanum was increased the release rate (K1) was decreased. To evaluate drug release mechanism form the tablets, plots of percent released vs. square root of time as per Higuchi’s equation [6] were constructed. These plots were found to be linear with all the tablets with correlation coefficient values in the range 0.865-0.989 indicating that the drug release from the tablets was diffusion controlled. When the release data were analyzed as per Peppas equation [7], the release exponent ‘n’ was <0.5 with all the tablets indicating Fickian diffusion as the release mechanism. The excellent release retarding effect is due to the resin contained in the olibanum. 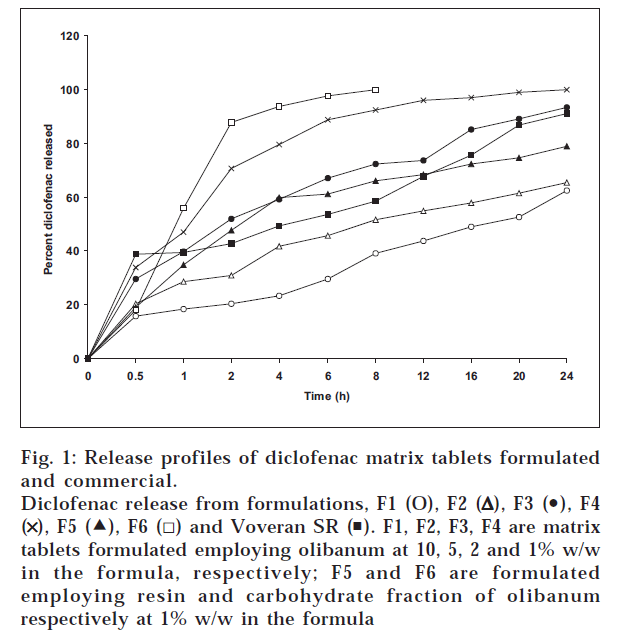