The aim of this study was to evaluate the skin colouring properties of curcuma extract in cosmetic formulations. Objective measurements of the skin colour changes were done by Chromameter using the CIE L*a*b* colour space parameters. These measurements were correlated with the results of the sensory analysis. The observations showed permanent, visible and statistically significant changing of b* component after one application of emulsions containing 12% and 25% of turmeric extract. The change of skin color remained also after removing the emulsion. Sensory analysis indicated that the tested emulsions with curcuma extract have a significant impact on skin smoothness, spreadability, cosmetic absorption and pillow effect.

Beneficial effects of plant extracts have been known since the prehistoric times. Modern cosmetology is currently more than ever interested to apply valuable raw plant materials in manufacturing cosmetics products since the plant extracts contain a plethora of active ingredients. Potential skin caring effects are related to their antioxidant and antiinflammatory properties [1]. Exposure of the skin on ultraviolet radiation gives rise to formation of free radical species that react with DNA, proteins and fatty acids leading to various oxidation products. The latter liberate pro-inflammatory mediators responsible for irritation of the epidermis. Free radicals generated by UV radiation also take part in the process that may damage skin regulatory mechanisms, resulting in visible photoageing effects such as wrinkles, hiperpigmentation and loss of skin firmness. Making an attempt to reduce negative effects of ultraviolet radiation, some raw materials of plant origin are added to cosmetic products in order to incorporate their principal ingredients having potentially protecting and colouring activity, and therefore providing better skin colour similar to natural suntan without the above-mentioned side effects [2]. This activity possesses curcumin (diferuloylmethane), a yellow pigment derived from the rhizome of plant Curcuma longa (turmeric). It is a hydrophobic polyphenol active ingredients, dimeric derivative of ferulic acid. Diferuloylmethane belongs to the group of curcuminoids. Turmeric constituents also include the three other curcuminoids: Desmethoxycurcumin, bidesmethoxycurcumin and tetrahydroxycumarin, but only diferuloylmethane is responsible for its characteristic yellow colour [3-5]. The content of curcumin in rhizome is in range from 3 to 5.4% and depends on the place of plant orgin. It has been known for a long time that curcuminoids compounds exhibit a broad spectrum of therapeutic activity. The most important are antioxidant, antiinflammatory, antimicrobial and anticarcinogenic activity [6-8]. Turmeric is also used as natural coloring agent and a spice for food, as well as in pharmaceutical industry. As for a cosmetic purpose, curcumin is used as an active compound in skin care preparations because its antioxidant, antiinflammatory and antiaging activity. Since ages, the paste of turmeric powder has been used for treatment of inflammation and skin injury and also as an antiseptic mainly due to high curcumin content. Curcumin has also been traditionally used for cosmetic purposes as skin colourant [9-11].

The aim of this study was to evaluate the skin colouring properties of cosmetic formulations with curcuma extract. Objective measurements of the skin colour changes were done by Chromameter using the CIE L*a*b* colour space parameters. These measurements were correlated with the results of the sensory analysis.

In the present study the following three cosmetic emulsions were tested: Base emulsion without extract (placebo) (Table 1) and two emulsions with extract: Formulations with 12%* and 25%** Curcuma Longa Root Extract (Table 2). Since the content of Curcuma Longa Root Extract in the commercial product was in the range of 5-8%, we used 12% and 25% of commercial extract in emulsions, which corresponding to a 1% and 2% of pure curcumin, respectively.

Table 1: Ingredients of Base Emulsion

The efficiency of the skin colouring properties of curcuma extract in cosmetic formulations were measured by Chromameter (Konica Minolta Chroma- Meter-CR-400). Chromameter CR-400 is handheld tristimulus reflectance meters, by which skin is illuminated by a pulsed xenon arc lamp. This device allows to assess skin color by measuring the reflectance spectrophotometer using the CIE L*a*b* colour space parameters, where, L* - mean lightness (brightness); a* and b* - are color components (a - the area between the green and red color; b- the area between the blue and yellow color). The measurements were done in four phases, before applying the emulsions, 15 min after the application of emulsions, 15 min after the second application and 15 min after removing emulsions from the skin, respectively. Each measurement were carried out at least three independent times (each performed in triplicate). The results are shown as changes of Lab parameters after application of emulsion with the Turmeric compared to the results carried out before application of the emulsion without extract. The results are presented as a mean±standard deviation of six independent experiments, each performed in triplicate.

As it was demonstrated earlier, cream with curcuminoids extract exhibited statistically significant impact on improving of hydration, melanin content, elasticity, viscoelasticity and reducing of skin wrinkles [11]. The aim of present study was to evaluate the skin colouring properties of curcuma extract in cosmetic formulations. During the research we prepared emulsions containing different concentrations of Turmeric and chosen two with 12% and 25% of turmeric. We also prepared an emulsion without extract (as a standard). The emulsion with 25% of turmeric corresponding to 2% of pure curcumin concentration in the products, which representing the lowest recommended concentration. Emulsion with 25% of extract had intense yellow color and affected on change in skin color. While the skin colour change after application of the emulsion with 12% of turmeric was barely visible.

The results obtained for emulsion without extract showed no statistically significant changes in L*a*b* colour space parameters (fig. 1), which means that the base emulsion did not change the skin color, so it could be a standard for measurements performed after application of emulsions with turmeric. Then, analogous study was performed for preparation containing 12 % of turmeric. The results obtained for this emulsion showed statistically significant changes in L*a*b* colour space parameters (fig. 2). The change in skin colour was both after the first and the second application. Formulation with 12 % of turmeric after the first application made skin darker and has changed the skin color to more green and more yellow. After removing the emulsions from the skin values of ?L? and ?a? components back to the state before the application, which indicates that preparation with 12% of turmeric did not cause permanent changes in the skin brightness and redness. However, changing of ?b? component was not within the tolerance range, which indicates a statistically significant impact of emulsion with 12% of turmeric on a permanent change in skin color to a more yellow color. 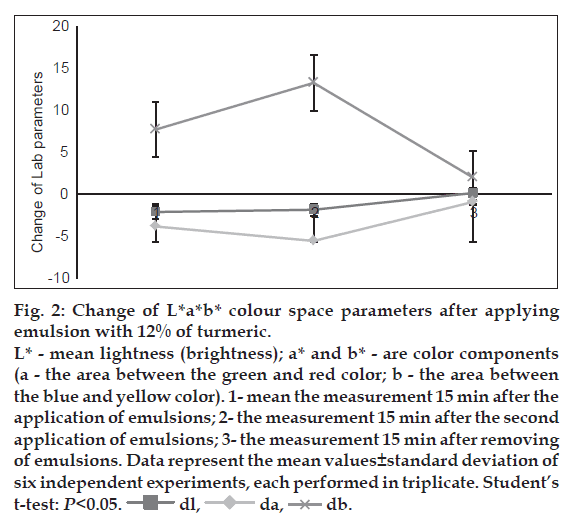 The results obtained for emulsion with 25% of turmeric also showed statistically significant changes in L*a*b* colour space parameters (fig. 3). The change in skin colour was both after the first and the second application. After removing the emulsions from skin values of ?L? component back to the state before the application, which indicates that preparation with 25% of turmeric did not cause permanent changes in the skin brightness. The changes of ?a? and b? components were not within the tolerance range, which indicates a statistically significant impact of emulsions with 25% of turmeric on a permanent change in skin redness and yellowing. 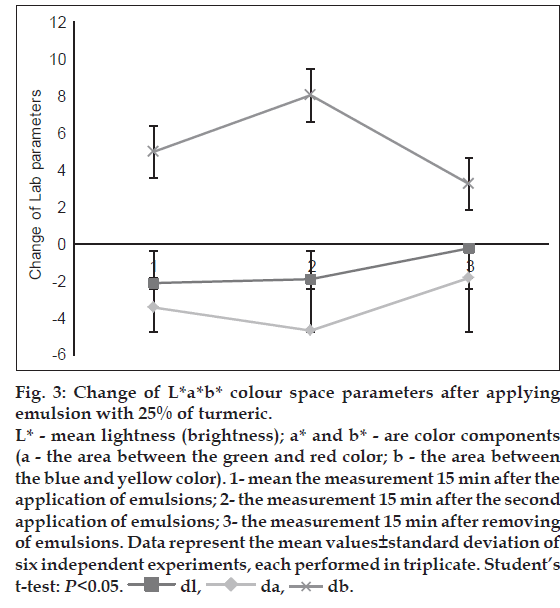 Sensory analysis indicated that the color of the emulsions with turmeric (for both tested concentrations) and change in the skin colour after its application were not satisfactory (fig. 4). It was also observed that turmeric had no significant impact on the consistency, adhesion and uniformity of emulsions. However, according to volunteers the turmeric has a significant impact on skin smoothness, spreadability, cosmetic absorption and pillow effect.

The curcuma extract has numerous applications in food, pharmaceutical and cosmetic industries mainly as active ingredient with high antiinflammatory and antioxidants capacity. On the basis of the results obtained in this study it may be concluded that turmeric has potential colouring properties. Despite the observed significant differences in the skin colour the resulting color effect was not satisfactory to the volunteers. The results obtained showed that curcumin may be used as an active ingredient in self-tanning preparations or in so popular BB creams (blemish balm or blemish base). The above observations require further research into improved outcomes and acceptability by volunteers.