The famous saying “there is good and bad in everything” implies to the plant too. The good side is that it has antioxidant substances and the bad side is the toxicity. Medicinal plant parts including roots, leaves, stems, barks, flowers and fruit have been used in virtually all cultures as a source of medicine because of their pharmacological activities and antioxidant properties [1]. They are commonly rich in phenolic compounds such as flavonoids, phenolic acids, tannins, coumarins, and lignins [2]. Clinacanthus nutans has been widely used as “traditional medicinal plant” in Asia for treating skin rashes, bugs and snake chomps, sores brought on by herpes simplex infection, diabetes mellitus, fever and diuretics [3].

C. nutans is a shrub of 1-3 m height with pubescent branches. Leaves are pale green, simple, opposite, narrowly elliptic oblong with acute apex size 2.5- 13.0 cm long and 0.5-1.5 cm wide. The leaf base are obtuse rounded or truncate and often oblique. In addition, it has about 6-7 pairs side of veins. The stem is stiffly straight along with internodes and vertical strips along the stem. Flowers are dense at the peak of the branch, has glandular-pubescent calyx around 3.5 cm with dull red, green base and yellow streaks. As the flowers are in dense cymes at the top of the branches and often terminating drooping horizontal [4]. Stamens are exert from the corolla. The ovary is packed into two cells and each cell contains two ovules [9]. Phytochemical analysis has shown that C. nutans contains several kinds of clinamide derivatives [10], alkaloids [11], chlorophyll [12], flavonoids [13], phenolic compounds [14].

Medicinal plants have gained huge interests from researchers around the world because of their positive biological activity [15]. However, there is still not much data available about the toxicity of medical plants. For this reason, this experiment is set out to observe the cytotoxic effect of Clinacanthus nutans extract against Artemia salina. The brine shrimp lethality assay is a top method used to indicate general toxicity because of its simplicity [16-18]. The findings from this study would give basic contributions for the development of new treatments for health providers.

Fresh, mature, green leaves of C. nutans were randomly collected in Surat Thani Province, Southern part of Thailand. The voucher specimen was numbered and kept in our research laboratory for the further reference. The leaves were washed with tap water and air dried in shade for 24 h and dried in a hot air oven at 70° for 6 h, and crushed with a blender (fig.1). The extraction procedure was determined by the method of Pavananundt, et al. [19] with modifications. Five grams of leaf powder was extracted with 100 ml of distilled water on a shaker at 180 rpm for 0.5, 1, 3, 5, and 24 h at room temperature. The whole mixture was then filtered through a fresh gauge plug, and centrifuged at 4000 rpm for 10 min Finally, supernatant was filtered with a Whatman number 1 filter paper, the clear filtrate used as a stock solution for total phenolic compound measurement and bioassay experiment. Total phenolic compound was determined using Folin–Ciocalteu reagent according to methods of Jiraungkoorskul [20] and Mcdonald, et al. [21] with modifications. Briefly, the 50 μl of the extraction in each time (0.5, 1, 3, 5 and 24 h) was mixed with 250 μl of 10% Folin-Ciocalteus and 200 μl of 0.7 M sodium carbonate then add distilled water until 5 ml and incubated at room temperature for 2 h in the dark room. The mixture was measured at 724 nm by using a spectrophotometer. Quantification was based on the standard curve of the gallic acid and expressed as gallic acid equivalent (GAE) using the following linear equation based on the calibration curve as shown in this equation (OD=8314.1C2– 2631.6C+75.261), where OD was the absorbance and C was concentration as GAE.

The brine shrimp lethality assay was assigned to determine the cytotoxic effect of plant extract. It followed the method by Meyer, et al. [16]. Due to the highest amount of total phenolic compound, the required concentrations (0, 400, 800, 1600, 3200, 6400 and 12800 μg/ml) were prepared through mixing up of the 1 h extraction with variable amounts of 2.5% NaCl. Ten A. salina were added into five replicates of each concentration of the leaf extract. The bioassay was maintained at 26±1° throughout the test. The mortality was recorded for a maximum of 24 h of exposure. They were considered dead or moribund if they stopped moving for a prolonged period even after gentle probing with a small spatula. The LC50 was analyzed by the probit method of Finney [22] using the SPSS 18.0 (Statistical Package of Social Sciences) software. It estimated the lethal concentration and the slope of the regression line with its confidence interval (P≤0.05). 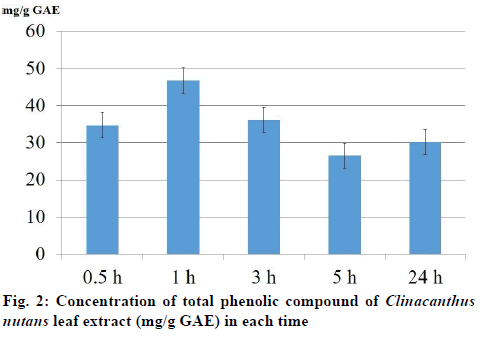 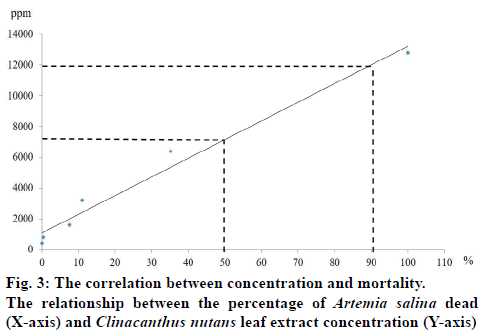 Fig 3: The correlation between concentration and mortality. The relationship between the percentage of Artemia salina dead (X-axis) and Clinacanthus nutans leaf extract concentration (Y-axis)

Using brine shrimp lethality bioassay the tested cytotoxic activity of the aqueous extract of leaves of C. nutans were found to show a little toxicity as expressed the 24 h LC50 and LC90 values in A. salina were 7151.1 and 12008.7 μg/ml, respectively. Each of the different concentrations samples showed different mortality rates. When graphed, the concentrations versus mortality percentage showed an approximate linear correlation. These results were not in agreement with earlier reports because most of the studies on C. nutans cytotoxicity have been done using crude extracts. Various researchers have reported the cytotoxicity of C. nutans in different doses, time and solvent extraction. Haetrakul, et al. [30] found that C. nutans plant extract at 0.005 and 0.01% damaged Koi Fin cell line and for non-toxic concentration of this plant was 0.001%. Kunsorn, et al. [4] reported the IC50 values of C. nutans extracted with n-hexane, dichloromethane and methanol against herpes simplex virus-1 were 32.05±3.63, 44.50±2.66, and 64.93±7.00 μg/ml, respectively. Ping et al. [31] reported that the repeatedly dosing of C. nutans extract at 0.3, 0.6 and 0.9 g/kg up to 14 days was proven safe in male Sprague Dawley rats without causing any adverse effects and organ damages in rats. Arullappan, et al. [7] reported that the petroleum ether extracts of C. nutans demonstrated the strongest cytotoxic activity against HeLa and K-562 cell lines with IC50 of 18.0 and 20.0 μg/ml, respectively. This activity could be explained by the phenols and flavonoids present in the extract. There are the reports in the literature describing the antimicrobial activity correlated high content of phenolics and flavonoids in C. nutans leave extract [7,32].

In conclusion, the aqueous extract of C. nutans can be alternatively used as the natural product. However, further studies are necessary to find out what the active substances are and how they perform or the mechanism of them in the target species.

The authors are thankful to the members of the Fish Research Unit, Department of Pathobiology, Faculty of Science, Mahidol University, Bangkok, for the technical support in their laboratory.

This study was funded by the Thailand Research Fund and the Commission on Higher Education: Research Grant for Mid–Career University Faculty.