The objective of the present work was to formulate the enteric minitablets of isoniazid by cold extrusion method. The minitablets were prepared using isoniazid, hydroxylpropylmethylcellulose phthalate and dibasic calcium phosphate. The minitablets were coated using hydroxypropylmethylcellulose phthalate. Full factorial design was adopted to optimize the formulation. The minitablets showed good flow and acceptable friability. The drug release was resisted in 0.1 N HCl for 2 h from the optimized batch. The optimized batch showed more than 90% of drug release in phosphate buffer in 15 min. Capsules containing rifampicin powder and enteric isoniazid minitablets showed complete drug release in acidic and alkaline media respectively. The process of cold extrusion appears to be an attractive alternative to by-pass the existing patents.

Isoniazid, hydroxypropylmethylcellulose phthalate and dibasic calcium phosphate were mixed for 10 min. Distilled water (1 ml per g of isoniazid) was used to prepare wet mass for extrusion. The mass was extruded to yield 1 mm diameter rods. The rods were partially dried by storing them at ambient conditions for 10 min and then cut to the size of 1 mm using a sharp blade. The minitablets were dried in a microwave oven for 2 min at 90º.

The isoniazid minitablets were evaluated for friability, angle of repose, Carr’s index and Hausner ratio to check mechanical strength and flowability [6-8]. The friability of the tablets was determined using Roche friabilator (Electrolab, Mumbai). The angle of repose was determined using a funnel method. Carr’s index is 100 times the ratio of bulk density minus tapped density to bulk density. Hausner ratio is the ratio of bulk density to tapped density.

The enteric coating was deposited on the minitablets using coating solution containing 2% w/v of hydroxylpropylmethylcellulose phthalate in acetone. Dibutyl phthalate (40% by weight of polymer) was used as a plasticizer and magnesium stearate (10% by weight of polymer) was used to impart hydrophobicity and luster to the coat. The minitablets of isoniazid were coated by pan coating method. The composition of isoniazid minitablets is shown in Table 1. The isoniazid minitablets were filled in hard gelatin capsule by considering their theoretical weights as shown in Table 1.

The cold extrusion method is simple, convenient and continuous processing method for preparing minitablets. Due to extrusion of wet mass, the diameter of tablet can be easily maintained throughout processing. Remon and co-workers used cold extrusion method for the preparation of uncoated hydrochlorthiazide tablets [9]. Remon and co-workers concluded that cold extrusion method can be used as an alternative tablet production technique for ingredients with poor compaction properties9. A 32 full factorial design was adopted to prepare nine batches of minitablets with different concentration of HPMCP in core (X1) and weight gain by minitablets due to enteric coating (X2). The time required to release 90% (t90) of isoniazid (Y) was selected as a dependent variable. Dibasic calcium phosphate was used as a high density compressible excipient (dipping agent). The minitablets floated on the dissolution medium (0.1 N HCl) when dibasic calcium phosphate was not used in the formulation. Enteric coating was essential since dibasic calcium phosphate is soluble in acidic medium. The purpose of incorporating enteric polymer in the core of the minitablets was to modulate the release of isoniazid in alkaline medium.

Fig. 1 shows dissolution profile of the nine batches. The area above horizontal black line in fig. 2 is acceptance area for drug release from enteric minitablets of isoniazid. Greater than 90% isoniazid was released from the minitablets of batches 1 to 7 in the acidic dissolution medium in less than 2 h. The results (Table 1 and fig. 2) of batches 1-3, 4-6 and 7-9 reveal that t90 is dependent on weight gain by the minitablets. The results of batches 1, 4 and 7 reveal that t90 is also dependent on the amount of HPMCP in the minitablets. The batches 2, 5, and 8 and the batches 3, 6, and 9 showed similar trend. Out of bathes 8 and 9, batch 8 was selected for further studies since the t90 was less than that of batch 9 and it required less weight gain to modulate the drug release. The minitablets of batch 8 showed more than 90% drug release in phosphate buffer within 15 min and the drug release was resisted in 0.1 N HCl (pH 1.5) for 2 h (fig.1). Therefore, batch 8 was ranked as best batch. The insolubility of HPMCP coat in acidic dissolution medium (0.1 N HCl) is responsible for retardation of drug release. It is reported that HPMCP has good acid resistance capacity and hence it is most widely used in enteric dosage form [13]. Figs. 3 and 4 shows the impact of percentage of HPMCP in core (X1) and weight gain (X2) on time required to release 90% of isoniazid (Y). Multiple regression analysis was performed to evolve mathematical model that correlates Y with X1 and X2. The regression coefficient (r) was 0.9992. The statistically insignificant terms such as X1X2, X12 and X22 were eliminated from the full model because the P-values were greater than 0.05. The refined model is Y or (t90) = 0.012X1+0.009X2-2.067. 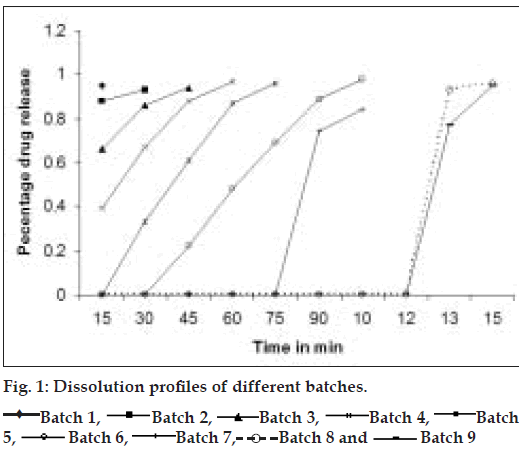 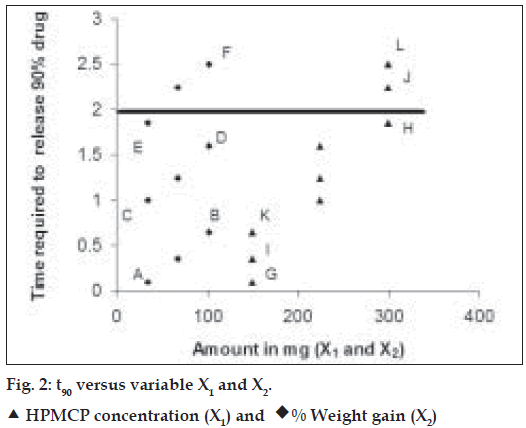 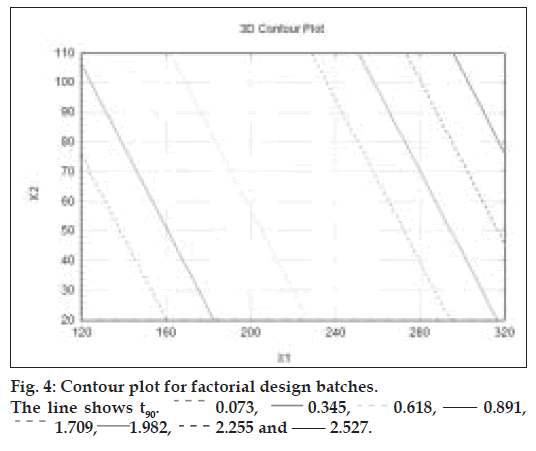 The results shown in Table 2 indicate that linear relationship exists between HPMCP concentration and weight gain. Hence, as the HPMCP concentration increases in core, less weight gain is required and vice-a-versa. One check-point batch (CP1) was prepared using 285 mg of HPMCP in core and 101mg weight gain. The observed and calculated values of Y were almost similar. The drug release profile of the check-point batch was comparable to that of batch 8 (fig. 5).

r2 is the square of correlation coefficient. 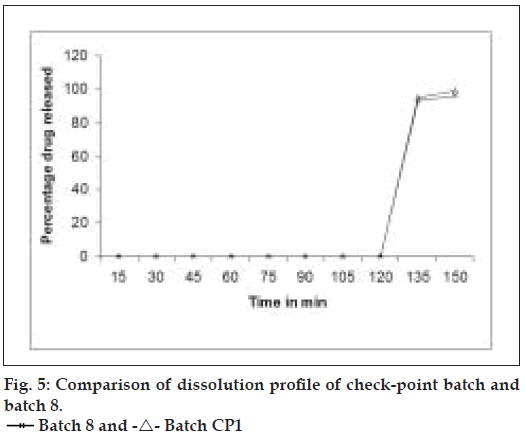 Fig. 5: Comparison of dissolution profile of check-point batch and batch 8. 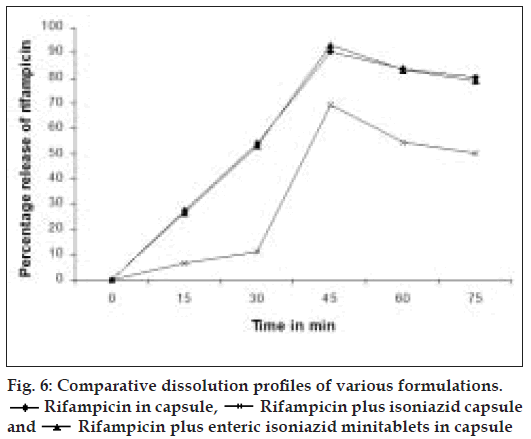 Rifampicin in capsule, Rifampicin plus isoniazid capsule and

The enteric quality was strongly influenced by the amount of hydoxypropylmethylcellulose phthalate in core and coat. The results of multiple regression analysis reveal that linear relationship exist between the amount of HPMCP in core and coat and the time required for 90% drug release. The degradation of rifampicin can be retarded to some extent in fixed dose combination formulations containing rifampicin and enteric coated isoniazid.