The aim of this investigation was to develop a novel multifunctional co-processed diluent consisting of microcrystalline cellulose (Avicel PH 102), crospovidone (Polyplasdone XL) and polyethylene glycol 4000. Colloidal silicon dioxide and talc were also incorporated as minor components in the diluent to improve tableting properties. Melt granulation was adopted for preparation of co-processed diluent. Percentage of Avicel PH 102, Polyplasdone XL and polyethylene glycol 4000 were selected as independent variables and disintegration time was chosen as a dependent variable in simplex lattice design. The co-processed diluent was characterised for angle of repose, bulk density, tapped density, Carr’s index, percentage of fines and dilution potential study. Acetaminophen and metformin were used as poorly compressible model drugs for preparation of tablets. The blend of granules of drug and extra granular co-processed diluent exhibited better flow as compared to the blend of drug granules and physical mixture of diluents blend. The diluent exhibited satisfactory tableting properties. The tablets exhibited fairly rapid drug release. In conclusion, melt granulation is proposed as a method of preparing co-processed diluent. The concept can be used to bypass patents on excipient manufacturing.

Tablet dosage form occupies 80% of all dosage forms administered to humans. The popularity of the tablet dosage form is primarily due to manufacturing convenience, ease of administration, dose accuracy and high stability as compared to the other dosage forms. The demand of multifunctional excipients has increased in recent years due to increase in popularity of tablet dosage form [1]. To prepare tablets with the best quality control characteristics, the powder mixture should exhibit good flow, a minimum tendency for segregation and the ability to compress [2]. Good flow is a prerequisite for the proper die filling as the dwell time of the hopper on the die cavity is very low (milliseconds). During such a low dwell time, uniform die filling must be attained to overcome the problems of content uniformity or weight uniformity. Co‑processed excipients are the intimate mixture of two or more excipients that can be achieved by suitable particle engineering technique [3]. Co‑processing leads to the formation of a product that has superior properties as compared to the physical mixtures of individual components [4]. In recent years, drug formulation scientists have recognised that single‑component excipients do not always provide the requisite performance to allow certain active pharmaceutical ingredients to be formulated or manufactured adequately [5].

One of the objectives of the present study was to improve the flow property of Avicel PH 102 by converting it into granular form by co‑processing. The study was also aimed to facilitate disintegration of tablets and subsequent dissolution of active pharmaceutical ingredient (API). The use of extra‑granular Avicel PH 102 provides several advantages as compared to intra‑granular Avicel PH 102. The compressibility characteristic of microcrystalline cellulose (MCC) is reduced by wet granulation. Drug dissolution is reduced when MCC is used intra‑granularly and the effect is more pronounced in the case of slightly soluble drugs [6]. The disadvantage with the use of extra‑granular Avicel PH 102 is that it exhibits poor flow [7]. Therefore, it may create problem of content uniformity. The flow of Avicel PH 102 can be enhanced and the compressibility can be maintained by dry granulation [8]. In this experimental work, Avicel PH 102 was converted into granular form by co‑processing it with Polyplasdone XL, polyethylene glycol (PEG) 4000, colloidal silicone dioxide and talc. Somewhat similar type of blend of excipients containing MCC, sodium starch glycolate, colloidal silicon dioxide and sodium stearyl fumarate is available with trade name EASYtab [9]. The purpose of selecting melt granulation was to keep water away from processing, which might affect compressibility. The method of co‑processing (melt granulation) is solvent‑free and requires short processing time (15‑25 min).

Polyethylene glycol was melted on a water bath. Avicel PH 102 and Polyplasdone XL were sifted through 100# sieve and mixed in a porcelain dish. The powder mixture was thoroughly blended with the melted PEG 4000. The mixture was heated on a water bath for 15‑20 min under stirring to facilitate mixing. Colloidal silicon dioxide (100# screen) and talc (100# screen) were blended for 5 min. Finally, the warm mass was passed through a 60# screen. The granules were then tapped on 200# screen. The granules (60/200# screen) were stored in air‑tight container till further use. The fraction which passed through 200# screen was labeled as fines.

Determination of optimum concentration of PEG 4000

Full factorial design (32) was employed to select the most appropriate concentration of PEG 4000 and blending time. Percentage of fines was chosen as a response as it can affect flow, content uniformity and compressibility. The ratio of Avicel PH 102 and Polyplasdone XL was 4:1. The composition of batches and the results are depicted in Table 2.

Selection of most appropriate proportion of Avicel PH 102, PEG 4000 and Polyplasdone XL

Simplex lattice design was adopted for the selection of the most appropriate amount of Avicel PH 102, PEG 4000 and Polyplasdone XL. High and low levels of Avicel PH 102, Polyplasdone XL and PEG 4000 were selected on the basis of results of preliminary trials (results not shown). The design layout and results are shown in Table 3. Paracetamol tablets were prepared by employing co‑processed diluent, added extra‑granularly. Fig. 1 shows the disintegration time of various batches. The mixture of paracetamol (40#) and Polyplasdone XL (40#) were granulated with a solution of PVP in isopropyl alcohol. The granules were dried in a tray drier for 2 h. Dried granules were passed through a 44# screen. The granules were mixed with extra‑granular co‑processed diluent and 1% magnesium stearate. The blend was compressed using a single punch tablet machine. The average weight of the tablets was 530 mg. The tablet contained 75% Paracetamol, 5% PVP K30, 2.5% intra‑granular Polyplasdone XL, 16.5% extra‑granular co‑processed diluent and 1% magnesium stearate. Tablets were evaluated for crushing strength, disintegration time, friability and angle of repose.

The angle of repose, Carr’s index and Hausner ratio of co‑processed diluents were measured as described earlier.

Particle size distribution was determined using a nest of standard sieves (60, 85, 100, 120 and 200#). The sieves were agitated on a rotap sieve shaker (International Combustion Ltd., London) for 2 min. From the percentage weight of granules retained on each sieve, the mean granule diameter was calculated [11].

Dilution potential is the amount of poorly compressible drug that can be satisfactorily compressed into a tablet. Acetaminophen and metformin were taken as model drugs for the evaluation of dilution potential. The drug and Polyplasdone XL were passed through 40# and mixed. The blend was granulated with PVP K30 dissolved in isopropyl alcohol (10% w/v). The concentrations of PVP K30 for paracetamol and metformin tablets were 5% and 2.5%, respectively. The granules were dried in a tray drier for 2 h at 50°. The dried granules were screened through 20# screen. The granules were successively mixed with co‑processed diluent for 5 min and magnesium stearate for 2 min.

Stability study was carried out for 6 months at room temperature. The tablets of paracetamol and metformin were stored for 6 months in individual plastic zip bags. After the end of which, the tablets were evaluated for drug content, dissolution, crushing strength, friability and disintegration time after 6 months.

The dissolution study of the tablets containing metformin HCl was performed using USP apparatus fitted with paddles (100 rpm) at 37º using phosphate buffer pH 6.8 as a dissolution media. At a predetermined time interval, 5 ml samples were withdrawn, filtered through a 0.45 μm membrane filter, diluted and assayed at 233 nm using a UV/Vis spectrophotometer.

The flow property was graded as per the specifications of USP [12]. Table 1 shows the flow property of Avicel PH 102, Polyplasdone XL and their physical blend with USP specifications. This was also compared with co‑processed diluent. The data shown in Table 2 were used to evolve mathematical model employing Excel®. The correlation coefficient (multiple R) was 0.95, indicating a good fit. The percentage of PEG 4000 produced significant effect (P=0.009) on the percentage of fines and the value of coefficient was 4.76. The amount of fines was more at low level of PEG 4000 as compared to that obtained at high level of PEG 4000. One of the objectives of the present study was to achieve quick disintegration of tablets. Although the amount of fines was too low at 15% PEG 4000 concentration, the tablets prepared using high level of PEG 4000 exhibited extended disintegration. At low blending time (5 min), 14% fines was formed at medium level. There is a negligible difference between the amount of fines formed at 15 min and 25 min blending time. Therefore, the optimum concentration of PEG 4000 could be 12.5% and blending time could be 15 min. 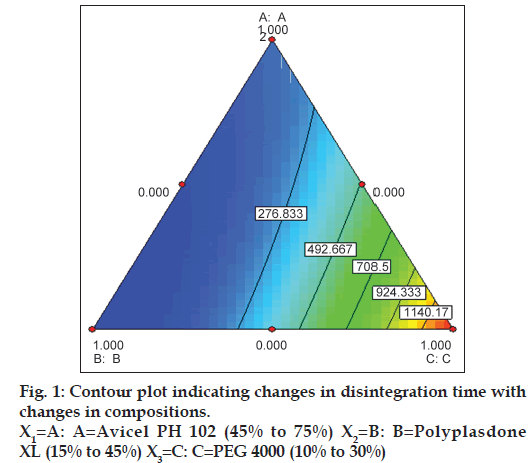 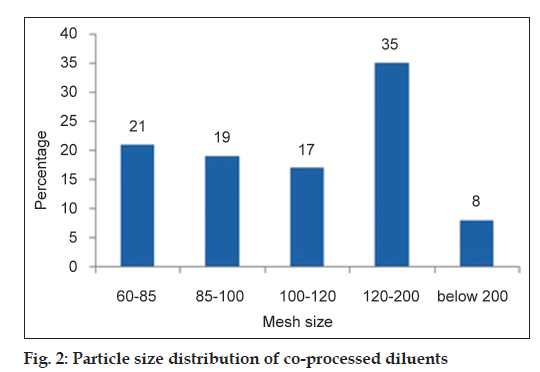 The composition and result of dilution potential study are presented in Table 4. The properties of paracetamol and metformin tablets were found to be adequate up to 85% in the granules prepared by wet granulation. The tablet properties reveal that the crushing strength was directly proportional to the amount of excipient and disintegration time was inversely correlated. It is well known to those who are good at direct compression that such a high load of drug cannot be achieved for poorly compressible paracetamol and metformin. The excipient can be used in direct compression for the drugs with low dose. 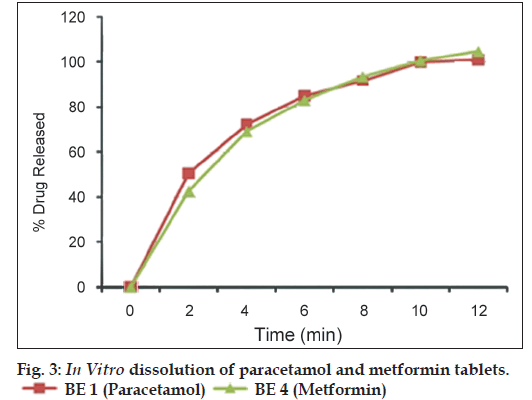 Fig 3: In Vitro dissolution of paracetamol and metformin tablets.

MCC was co‑processed with Polyplasdone XL and PEG 4000 to convert it in granular form. Melt granulation procedure was adopted as conventional wet granulation with aqueous binder reduces compactibility of MCC. The resultant excipient performed well as compared to physical mixture from the view point of multiple functions. The flow of the co‑processed diluent was improved significantly as compared to that of Avicel PH 102 and Polyplasdone XL alone. Avicel PH 102 and PVP are auxiliary dissolution enhancers. The disintegration time of tablets was less than 2 min. The diluent developed in the study may be considered as multifunctional diluent. The biggest advantage at industry utilizing this type of diluent could be simplified validation steps. The developed excipients can be considered as a versatile material for the preparation of various tablets at industry. The Inactive Ingredient Guide (IIG) limit of the excipients was within the recommended limits. The moisture sensitivity of PEG 4000 shall be considered while choosing package for tablets. The concept presented in this study can be used for by‑passing patent issue. Majority of co‑processed excipients are prepared by spray‑drying. The embryonic stage of excipient manufacturing may get momentum if scale‑up work is done at industry.