Facile Synthesis and Characterization of Some New 5-ethylidene-Thiazolidine-2,4-diones and their Antimicrobial Evaluation

A series of novel 5-ethylidene-thiazolidine-2,4-diones derivatives were synthesized by the knoevenagel condensation of aromatic ketone and N-substituted thiazolidinedione-2,4-diones. Use of KAl(SO4)2•12(H2O) i.e. Alum for the reaction makes this synthesis facile because of the some advantageous impacts viz. nontoxicity, efficient catalytic ability and lower cost of alum. Substitution of arylidene moiety at the position 5 on the thiazolidine-2,4-diones nucleus was carried out in this facile approach. Synthesized derivatives were characterized using various analytical tools and antimicrobial evaluation thereof was performed against Gram-positive, Gram negative bacteria and a fungal strain. All synthesized compounds showed moderate to very good activity against the microorganisms that they were tested for.

Thiazolidine is a privileged class of compounds having many biological activities. Thiazolidine-2,4- dione derivatives found as basic pharmacophore for variety of biological activities such as antibacterial and antifungal [1,2], anticancer, analgesic, aldose reductase inhibitors [3] antiinflammatory, antituberculosis, antitumor [4], cardiotonic [5] and antidiabetic activity [6]. Now a days the group of heterocyclic compounds such as thiazolidine-2,4-dione, 2-imino-4-thiazolidinone, 4-thioxo-thiazolidine-2,4-dione and 2-thioxo-1,3- thiazolidine- 4-one (rhodanine) have been found as an interesting candidate to work on because of their pharmacological properties [7-12].

In the recent years, bacterial infections have been increased considerably. In human civilization, bacteria are the main source of most deadly diseases and widespread epidemics. Some of the bacterial diseases such as tuberculosis, typhus, plague, diphtheria, typhoid fever, cholera, dysentery, and pneumonia have taken a high toll on humanity [13]. Improper and repeated use of certain antibiotics is the main cause of bacterial resistance. Bacteria become resistant to chemotherapeutic agents by destruction or inactivation of the drug, prevention of the penetration of the target site within the microbe and alteration of drug target sites [14,15]. Furthermore, antimicrobial therapy for infection control has been focused due to increasing bacterial resistance to antibiotics [16]. Antibiotics are formed synthetically by bacteria and fungi which suppressing the growth of microorganisms [17]. At present, new antibiotics are to be discovered which are active against multidrug-resistant.

Several literature reports are there on thiazolidine conjugates wherein they showed number of biological activities on getting various substituents on different positions of thiazolidine ring [18]. Medicinal chemistry is an important field of research for the discovery of new active molecules using heterocyclic moieties that increases biological activity [19]. Introducing arylidene groups at the position 5 of the thiazolidine ring by using alum has also been reported where in alum was used as catalyst and was found as an effective promoter for the synthesis of 5-arylidine-2,4-thiazolidinediones [20,21]. With this in view strategy has been made to synthesize some novel compounds based on heterocyclic moiety i.e. thiazolidine and evaluation thereof for antimicrobial activity against different Gram positive bacteria e.g. Staphylococcus Aureus and Streptococcus Pyogenes bacteria, Gram negative bacteria e.g. Escherichia Coli and Pseudomonas Aeruginosa. Further the synthesized conjugates were also studied for their anti-fungal activity against Candida albicans. To the best of our knowledge this is the first time that modification of the thiazolidine is carried out using various substituents and derivatives were studied for antimicrobial evaluation.

To a 250 ml three neck flask outfitted with a thermometer, a stirrer and a condenser, 2-chloroacetic acid (37.8 g, 0.4 mol), thiourea (30.4 g, 0.4 mol) and water (100 ml) were added This mixture was stirred at room temperature for at least 1 h, and then was heated to reflux. The progress of the reaction was monitored by TLC (elution- chloroform:methanol- 20:1) until the reaction was completed (3 h). Then the solution was allowed to cool at room temperature. Obtained pale yellow crystalline solid was filtered and washed with water and was re-crystalized from water (decolorized with activated carbon) to get pure white crystals. Yield: 79 %, melting point (MP) 124-125°.

A mixture of thiazolidine-2,4-dione (0.88 g, 0.0075 mol), 2-chloro-N-(phenyl)acetamide (0.93 g, 0.005 mol) and sodium bicarbonate (0.84 g, 0.01 mol) were dissolved in Dimethylformamide (15 ml) and stirred at room temperature for overnight. After completion of the reaction which was confirmation by TLC (eluent- 7:3- hexane:ethyl acetate), the reaction mixture was poured into water (125 ml). The product was extracted in organic layer using ethyl acetate followed by solvent distillation of access solvent and crystallization using methanol/acetone. Yield: 80 %, MP 189-190°.

A mixture of aromatic Ketone (0.001 mol), 2-(2,4-dioxothiazolidin-3-yl)-N-(phenyl) acetamide (0.001 mol) and water (10 ml) were taken in flask, to this reaction mixture, alum (10 mol %) was added. The reaction mixture was heated to reflux for the appropriate time as shown in Table 1. The progress of reaction was monitored by TLC using ethyl acetate: n-hexane (1:9) as a solvent system. After the completion of the reaction, the mixture was cooled to room temperature and poured into crushed ice to get solid product. Obtained product was filtered dried and re-crystalized using ethanol to give 5-ethylidene-2,4-thiazolidenedione 2B1-2B15 in good to excellent yield (Fig. 1). 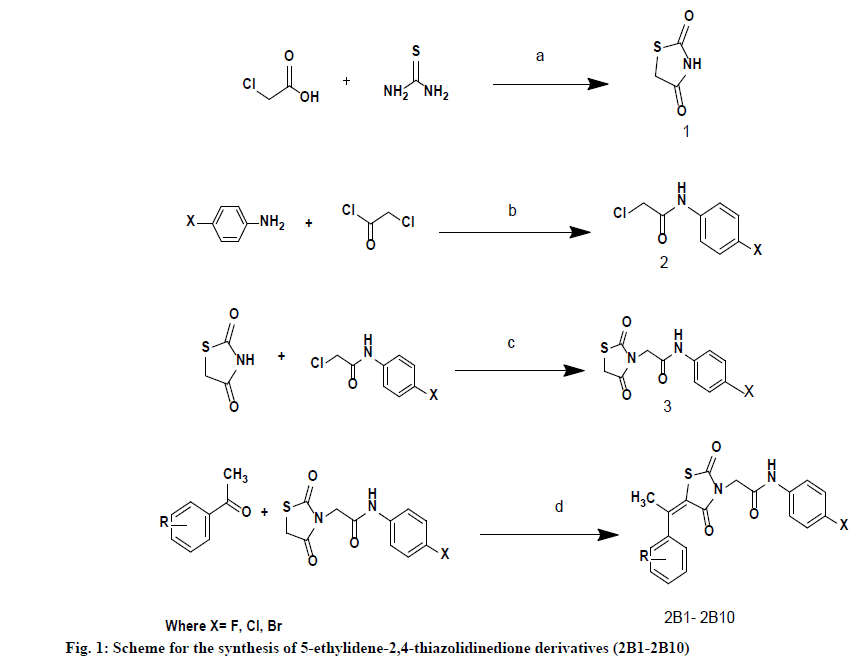 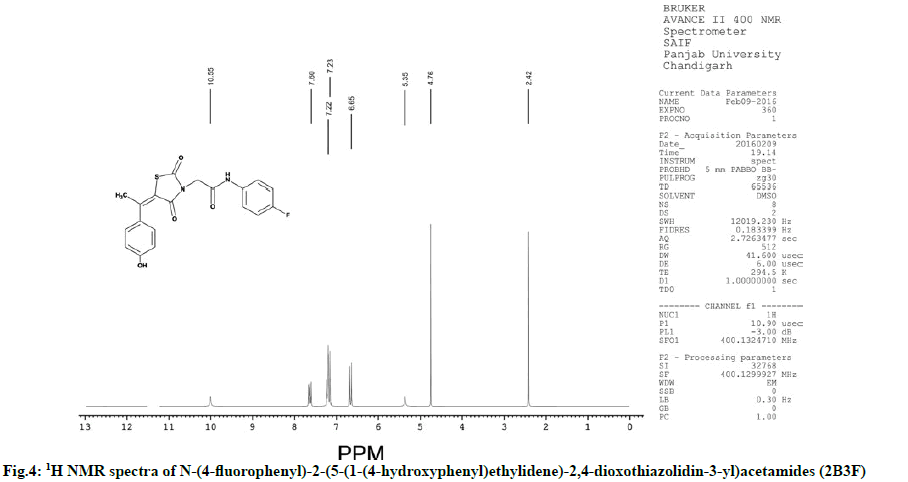 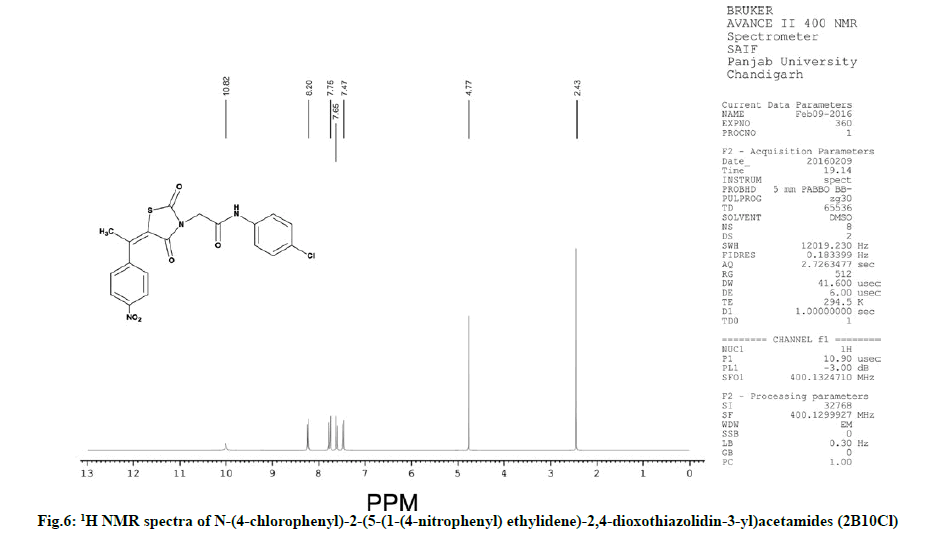 The newly synthesized compounds were evaluated for their antibacterial activity by Broth Dilution Method. It is one of the non-automated in vitro bacterial susceptibility tests. This classic method yields a quantitative result for the amount of antimicrobial agents that is needed to inhibit growth of specific microorganisms. It is carried out in tubes, Staphylococcus Aureus (Microbial Type Culture Collection (MTCC) 96) and Streptococcus Pyogenes (MTCC 96) from Gram positive group of bacteria and Escherichia Coli (MTCC 443) and Pseudomonas Aeruginosa (MTCC 1688) from Gram negative group of bacteria for antibacterial activity were used. Candida albicans (MTCC 227) used for evaluation of antifungal activity. All MTCC Cultures were tested against synthesized and reference standard drugs. Mueller Hinton Broth was used as nutrient medium to grow and dilute the drug suspension for the test bacteria. Inoculum size for test strain was adjusted to 108 Colony Forming Unit (CFU) per ml by comparing the turbidity. Ciprofloxacin was used as the reference standard for antibacterial activity and Ketoconazole was used as the reference standard for antifungal activity. DMSO was used as diluents to get desired concentration of drugs to test upon standard bacterial strains.

Serial dilutions were prepared in primary and secondary screening. The control tube containing no antibiotic is immediately sub cultured [before inoculation] by spreading a loopful evenly over a quarter of plate of medium, suitable for the growth of the test organism and put for incubation at 37° overnight. The tubes are then incubated overnight; the Minimum inhibitory concentration (MIC) of the control organism was read to check the accuracy of the drug concentrations. The lowest concentration inhibiting growth of the organism was recorded as the MIC. The amount of growth from the control tube before incubation [which represents the original inoculum] was compared.

The use of solvents in Knoevenagel condensation is huge but herein present study the conditions of knovenagel condensation have been customized wherein the proposed derivatives were synthesized by condensation of aromatic ketones and N-substituted thiazolidinedione-2,4-diones. The syntheses were carried out using alum as a catalyst yielding 5-ethylidene-thiazolidine-2,4-dione derivatives. Water was used as a medium of reaction, use of alum in water could be a great alternative to some hazardous bases and catalysts i.e. piperdine, pyridine and some solvents i.e. DMF, DMSO and toluene. Optimization of the study was carried out using different catalytic amount of alum as shown in Table 2. Study indicates the change in the concentration of catalysts leads the change in the yield of the products and also affects the reaction time. Reaction time was observed to be decreased with increasing catalyst amount [Catalyst amount (mol percentage) 5, 10, 15: Reaction time (min) 90, 60, 60 respectively]. Further the yield of the product was also seems to be increased with increasing amount of catalyst in the reaction (Table 2). Further physico chemical characterization of the synthesized compounds are given in Table 3 highlighting the compounds (2B1-2B10) having amino, chloro and nitro groups get reacted in a smooth manner to give desired product.

The progress of reaction was monitored by TLC which is step wise given in the general synthetic procedure. All the melting points were taken after the recryslization of compound and are given in Table 2.

A series of innovative 5-ethylidene-thiazolidine-2,4- dione derivatives were synthesized by the Knoevenagel condensation using alum as a catalyst. All compounds were tested against Gram-positive, Gram-negative bacteria and C. albicans. Synthesized compounds were characterized in terms of physicochemical characterization and also by using some different analytical techniques i.e. IR and 1H NMR and 13C NMR spectroscopy. Present study showed a sort of structural function relationship amongst the synthesized derivatives. It was noted that the compounds containing chlorine in the molecule showed the excellent antibacterial activity that indicates the potential of chlorine towards the bacteria. Furthermore, it is to be noted that attaching an electron-withdrawing functional group e.g. halogen or nitro on phenyl ring played a crucial role to enhance the activity. For the development of new antibiotics to be active against multidrug-resistant the proposed 5-ethylidenethiazolidine- 2,4-dione derivatives could be a better option since the thiazolidine conjugates are already a well-known biologically active components specially when various substituents were attached on different positions of thiazolidine ring. In addition, the proposed method of synthesizing these derivatives is having many advantages e.g. easy work up procedure, better yields, low reaction time and eco friendly catalyst, made these derivatives a safer compared to the existing one.

Authors are grateful to Uka Tarsadia University for support and providing laboratory facilities and encouragement.