Forced degradation studies of aloe emodin and emodin by HPTLC

Aloe emodin [1,8-Dihydroxy-3-(hydroxymethyl)- 9,10-anthracenedione] and emodin [6-methyl-1,3,8- trihydroxyanthraquinone] are anthraquinones naturally present in rhubarb (Rheum emodi), candle bush (Cassia alata), aloes (Aloe barbadensis dried leaf juice) and cascara (Cascara sagrada) [1]. They act as antiinflammatory [2], laxative [3], antiaging, anticancer [4], antioxidant [5] and antitumor agents. Aloe emodin and emodin show cell cycle arrest, cytotoxic to cells and leads to apoptosis in human tongue and breast cancer cells thus acting as antiproliferative agents. There are many herbal marketed formulations, which have aloe emodin and emodin as major constituents such as Amlycure D.S. capsules, N-Zime syrup, Divya Udarkalp churna, and LIV-SR syrup. Considerable interest on herbal drugs has been aroused because of their beneficial effects on humans. The aim of the present work was to carry out forced degradation studies and to provide the information on stability inherent conditions of the potential markers i.e. aloe emodin and emodin and to ascertain the degradation pathways. The force degradation studies of drug substances should be carried out in various conditions such as effect of light, humidity, elevated temperature, oxidizing agents, acid and base degradation (across a range of pH values) according to stability guidelines by ICH Q1AR (International Conference on Harmonisation). The effect of various forced degradation conditions was observed using high-performance thin layer chromatography (HPTLC) analysis [6]. There is no method reported for analysis of forced degradation studies of aloe emodin and emodin.

Analytical grade reagents: ethyl acetate, formic acid, toulene and methanol were obtained from S.D. Fine-Chem Limited, Mumbai, India. Aloe emodin and emodin standards were procured from Total Herb Solutions, Mumbai. Aloe emodin and emodin stock solutions (1000 µg/ml) were prepared by dissolving accurately weighed 10 mg of each standard in 10 ml methanol. TLC plates pre-coated with silica gel 60 F254 was used as stationary phase. Standard and sample solutions were applied as a band to the 10×10 cm plate (6.0 mm wide) by using Camag Linomat V sample applicator (100 µl Hamilton syringe). Development of plate was done ascending to a distance of 80 mm with mobile phase at room temperature (24±2°) in Camag glass twin-trough chamber. The chamber was saturated for 30 min previously and the plates were scanned at 263 nm after development with Camag TLC Scanner- 3 using the deuterium lamp. 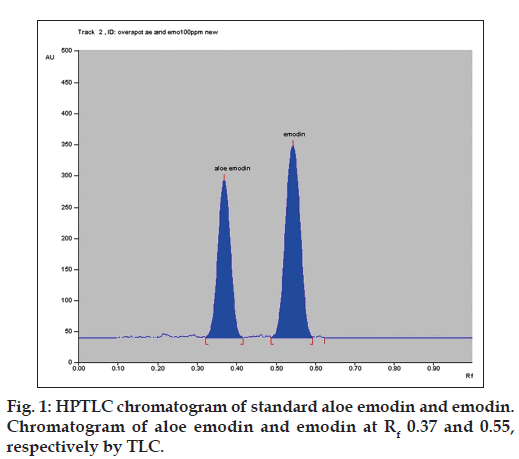 Each result is an average of three measurements. The markers aloe emodin and emodin was exposed to different forced degradation conditions as per ICH guidelines. ICH: International Conference on Harmonisation

Authors are thankful to the Anchrom Laboratory, Mumbai for giving training on HPTLC instrument.