The objectives of the study were to formulate hydroxypropyl methyl cellulose-based controlled release matrix tablets for theophylline with varying drug:polymer ratios (1:1 and 1:2) and differing tablet hardness (5, 6 and 7 kg/cm2), and to evaluate the tablet’s physico-chemical properties such as hardness, uniformity of weight, friability, drug content and in vitro drug release. Initially, granules were made by wet granulation technique and evaluated for angle of repose, bulk density, tapped density, bulkiness, compressibility index and hausner ratio. The results indicate good flow property of the granules and thus, the evaluated tablet physical properties were within the acceptable limits. The FT-IR study for the F-6 formulation showed that there was no interaction between the drug and the polymer. In vitro release studies were performed using Disso-2000 (paddle method) in 900 ml of pH 7.4 at 50 rpm. The result indicated that at high drug:polymer ratio (1:2) and hardness value 7 kg/cm2, prolonged drug release was observed than the low drug: polymer ratio (1:1) and hardness values (5 and 6 kg/cm2). The release kinetics was found to follow korsmeyers-peppas model and the mechanism of drug release was by non-fickian or anomalous diffusion. The F-6 formulation was chosen for stability studies. F-6 formulation was stable when it was kept at different temperatures for a period of 6 months.

Theophylline is a bronchodilator that relieves airflow obstruction in chronic asthma and decreases its symptoms. Theophylline is well absorbed by the gastrointestinal tract, and several sustained-release preparations are available. Previously the mainstay of asthma therapy, theophylline has been largely replaced with β2 agonists and corticosteroids due to a narrow therapeutic window, high side-effect profile, and potential for drug interactions. Overdose may cause seizures or potentially fatal arrhythmias. Theophylline is metabolized in the liver, is a CYP1A2 and 3A4 substrate, and interacts adversely with many drugs [1].

Controlled release products are designed to maintain constant therapeutic plasma concentration of the drug within the therapeutic range of the drug over prolonged period [2]. Matrix system is one of the methods used in the development of controlled release oral formulations. Matrix is defined as a well-mixed composite of one or more drugs with a gelling agent i.e. hydrophilic polymers [3]. In fact, matrix system has proven popular among the oral controlled drug delivery technologies because of their simplicity, ease in manufacturing, high level of reproducibility, stability of the raw materials and dosage form and ease of scale up and process validation [4-6]. In the current study, hydroxypropyl methyl cellulose (HPMC) is selected as a model hydrophilic polymer to prepare a controlled release oral tablet formulation for theophylline. HPMC is widely used in oral, ophthalmic and topical controlled release dosage forms because of its non-toxic nature, its capacity to accommodate high level of drug loading and its non-pH dependence [7,8].

The objectives of the study were to formulate HPMCbased controlled release matrix tablets for theophylline with varying drug:polymer ratios (1:1 and 1:2) and differing tablet hardness (5, 6 and 7 kg/cm2), and to evaluate the tablet’s physico-chemical properties such as hardness, uniformity of weight, friability, drug content and in vitro drug release. Initially, granules were made by wet granulation technique and evaluated for angle of repose, bulk density, tapped density, bulkiness, compressibility index and hausner ratio.

Tablet formulations were prepared by wet granulation method according to the ingredients shown in Table 1. Theophylline and HPMC K100M were mixed uniformly. Lactose was added to the drug and polymer mixture and blended thoroughly for 5 min. 2% of (PVP K30) was dissolved in sufficient quantity of IPA. PVP K30 in IPA was added to the drug, polymer and lactose mixture. Further sufficient quantities of IPA were added to the above mixture and mix it thoroughly to form a coherent mass. The formed coherent mass was sieved manually through sieve no. 16 to form granules. Then the granules were collected and dried at 40±2° for 2 h. The dried granules were sieved in sieve no. 22 and then evaluated for angle of repose, bulk density, tapped density, bulkiness, compressibility index and hausner ratio. Then, the granules were mixed with 2% of magnesium stearate uniformly and were compressed into tablets weighing 500 mg using 12 mm round flat faced punches in a rotary tablet press (Rimek mini press-1, Model RSB-4, Karnavathi Engineering, Ahmedabad) to a hardness of 5, 6 and 7 kg/cm2. The compressed tablets were dedusted and evaluated for various physico-chemical properties.

The thickness [12] and diameter of the tablets was measured using vernier calliper (Besto). About ten tablets from each formulation were randomly selected and evaluated. The hardness of all tablet formulations were tested using Monsanto hardness tester [13] (Shital Scientific Industries, Ahmedabad, India). The tablet was placed upon a fixed anvil and the force is transmitted to it by means of a moving plunger manually. In all the cases mean of five determinations were taken. To study weight variation, 20 tablets of each formulation was weighed using an electronic balance (Scaltec SPB31) and the average weight of the weighed tablets were calculated [14]. Preweighed twenty tablets were placed in a Roche friabilator and allowed to rotate for 100 revolutions. After 100 revolutions the tablets were dusted and reweighed [14].

Ten tablets from each formulation were powdered. The powder equivalent to 100 mg of theophylline was weighed and dissolved in phosphate buffer pH 7.4 in 100 ml standard flasks. From this suitable dilution was prepared and the solution was analyzed at 277 nm using UV double beam spectrophotometer (Elico SL164) using pH 7.4 as blank [14].

Infrared spectrum was taken for the matrix tablet of formulation F-6. FT-IR studies were obtained by KBR disk method using computer-mediated Fourier transformed infrared spectroscopy (FT-IR) (Shimadzu). The spectra of F-6 formulation were compared with those of pure theophylline and HPMC K100M [15].

in vitro drug release study was carried out using Disso-2000 dissolution apparatus (paddle type). Dissolution medium 900 ml of pH 7.4 was placed into the dissolution flask maintaining the temperature at 37±0.5° and rpm of 50 for 10 h. Samples measuring 10 ml were withdrawn every 30 min intervals, same quantity of fresh dissolution medium was replaced. The sampling was continued up to 10 h dissolution time period. Collected samples were suitably diluted with pH 7.4 and analyzed at 277 nm using pH 7.4 as blank in UV-double beam spectrophotometer (Elico SL164).

To know the release kinetics, the value obtained from in vitro drug release studies were plotted in various kinetic models like zero order, first order, higuchi model hixson-crowell and korsmeyer–peppas [16]. Zero order is Cumulative amount of drug release vs time. Equation is C=K0t, where K0 is the zero order rate constant expressed in units of concentration/time and t is the time in hours. First order is Log cumulative percentage drug remaining vs time. Equation is Log C=Log C0–Kt/2.303, where C0 is the initial concentration of drug, K is the first order constant and t is the time. Higuchi model is the Cumulative percent drug release vs square root of time. Equation is Q=Kt1/2, where K is the constant reflecting the design variables of the system and t is the time in hours. Hixson-Crowell model is the cube root percent drug remaining vs time. Equation is 3√Q0–3√Qt=KHCXt, where, Q0 is the initial amount of drug in the tablet, Qt is the amount of drug release in time t, KHC is the ration constant for the Hixson-Crowell rate equation and t is the time. Log cumulative percentage of drug release vs log time. The exponent n was calculated through the slope of straight line. Mt/M∞=ktn Where, Mt/M∞ is the fractional solute release, K is the kinetic constant characteristic of the drug polymer system, t is the release time and n is the exponent.

To indicate stability of theophylline in tablet formulations, the tablets prepared from F-6 formulation was stored at three different temperatures (4±2°, 28±2° and 45±2°) for a period of 6 months [3]. At every 2 month intervals the tablets were evaluated for physical appearance, the percentage of theophylline content and in vitro drug release.

Following wet granulation method, the granules were prepared based on the ingredients shown in Table 1. Table 2 shows the properties of the granules. It appears that the values of angle of repose, bulk density, bulkiness, tapped density, compressibility index and hausner ratio determined for the granules were within the range of acceptable limits. Therefore, the tablets were prepared using the granules. The various physico-chemical properties of the tablets are shown in Table 3. Whereas the hardness was found to be in range of 4.9±0.14–7.1±0.21 kg/cm2, the uniformity of weight was between 498±4.2– 501.4±6.8 mg. Similarly, the friability test indicated that the weight deviation was between 0.08±0.06– 0.32±0.07%. While the drug content was in the range of 96.6±0.51–98.0±0.43%, the thickness was in the range of 4.2±0.02–4.3±0.06 mm and the diameter was found to be 12.5±0.01–12.6±0.03 mm. 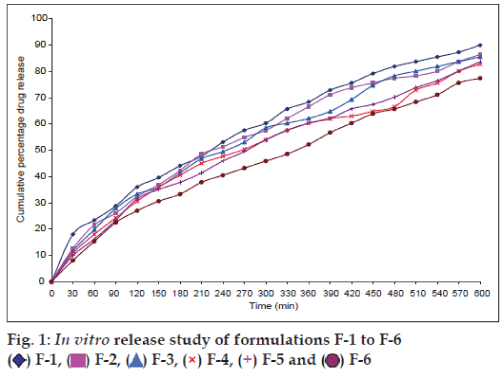 Based on various mathematical models, the magnitude of the release exponent “n” indicates the release mechanism (ie, fickian diffusion, case II transport or anomalous transport). The limits considered were n=0.45 (indicates a classical fickian diffusioncontrolled drug release) and n=0.89 (indicates a case II relaxational release transport; non-fickian, zeroorder release). Values of n between 0.45 and 0.89 can be regarded as an indicator of both phenomena (drug diffusion in the hydrated matrix and the polymer relaxation) commonly called anomalous transport [17]. The n values of all the formulations ranged between 0.6739-0.6935. Thus, it was proposed that these formulations delivered their active compound by coupled diffusion and erosion. Alderman [18] reported that when the hydrophilic matrix tablet enters an in vitro dissolution medium, drug particles initially pass into solution from the surface (immediate release). The solid matrix also begins to swell (polymer relaxation) as soon as hydration with solvent molecules, diffusion of the dissolved drug, and erosion of gelatinous viscous polymer layer into aggregates or granules, and these in turn deaggregate into fine particles that also release their drug content by dissolution. The release of theophylline from the controlled release tablets apparently follows Korsmeyer-Peppas model (R2 0.9883-0.9981).

The authors are thankful to the Correspondent, Mr. S. Sriram Ashok, Sankaralingam Bhuvaneswari College of Pharmacy, Sivakasi for providing the facilities to carry out this work.