Formulation and evaluation of microspheres of diltiazem hydrochloride

Microspheres of diltiazem hydrochloride were formulated using combination of polyethylene glycol 6000 and Eudragit RS 100 and Eudragit RS 100 alone by solvent evaporation and non-solvent addition methods with an aim to prolong its release. Six formulations prepared by using different drug to polymer ratios, were evaluated for relevant parameters and compared with marketed SR capsules. Depending upon the drug to polymer ratio, the entrapment, loading and encapsulation were found to range between 77.45±0.22 to 91.08±0.62% , 34.76±0.15 to 52.46±0.25% and 66.09±0.19 to 82.7 ±0.57%, respectively. The microspheres were spherical, discrete and compact and size distribution was between 4 to 24 µm. In vitro studies were carried out at different pH for a period of 12 h and compared with marketed formulation. As similarity factor f2 was 92.8 for FVI, it was subjected to further study. Formulations prepared using the combination of the retardants exhibited first order of drug release and zero order for preparations containing Eudragit RS 100 alone. The analysis of regression values of Higuchi plot and Korsmeyer-Peppas plot and "n" values of Korsmeyer-Peppas model suggested a combination of diffusional and dissolutional mechanism indicating the drug release from the formulations was controlled by more than one process. Drug polymer interaction was absent as evidenced by FT-IR and DSC thermograms. In vivo pharmacokinetic study of the formulation proved that prolongation of drug release was obtained by formulating as microspheres.

Diltiazem hydrochloride, a calcium channel blocker is available as sustained release preparation and literature reports many different sustained release formulations [1]. Eudragit RS 100 has not been reported in preparation of diltiazem hydrochloride microspheres and its suitability was evaluated in this work. PEG 6000 is generally associated with solubilisation but at high concentrations may act as retardant [2]. In this work a combination of both the materials was evaluated.

Diltiazem hydrochloride was obtained as gift sample from Mano pharmaceuticals, Chennai. Eudragit RS 100 was purchased from Colorcon Asia, Mumbai. All other chemicals used were of analytical grade. Twelve male white rabbits weighing about 2.8 kg to 3.1 kg were used in the in vivo study.

All the formulations were prepared according to the formulae given in Table 1. Solvent evaporation method was adopted for preparing formulations I, II, III which contains both Eudragit RS 100 and PEG 6000. A homogenous mixture of the polymers was made in acetone. Diltiazem hydrochloride was then added to the polymer solution. The resulting mixture was then poured in liquid paraffin while stirring continuously. Stirring was continued for 1 h, until acetone evaporated completely. The microspheres formed were collected by filtration, washed 4-5 times with petroleum ether and dried at room temperature for 24 h2. Coacervation-phase separation by the addition of non-solvent was followed for formulations IV, V, VI. Eudragit RS100 was dissolved in warm toluene to get homogenous polymer solution. The drug was then added to the polymer solution and mixed thoroughly with the aid of mechanical stirrer for 10 min. Coacervation was then induced by the addition of petroleum ether slowly over a period of 20 min while stirring at the same speed. After rigidisation, the encapsulated product was collected by filtration and dried at room temperature for 24 h3.

In vitro release profile of diltiazem hydrochloride from the preparations was examined in pH 1.2 buffer from 0-2 h, in pH 4.5 phosphate buffer from 2 to 4 h and in phosphate buffer pH 7.2 from 4 to 12 h using the rotating basket method specified in USP XXI at 100 rpm. Microspheres equivalent to 90 mg of drug were placed in the basket and the medium was maintained at 37±0.5o C. An aliquot of 10 ml were withdrawn periodically at intervals of one h and same volume of fresh medium was replaced. The concentration of the drug released at different time intervals was determined by measuring the absorbance at 236 nm [6]. Graphical representation of result is indicated in fig. 1. 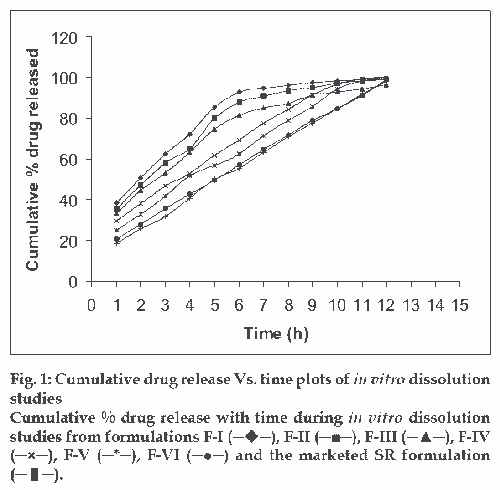 Infrared spectra of F-VI were recorded on Bomem MB-II FT-IR spectrometer. DSC thermogram of F-VI was recorded on a scanning calorimeter equipped with a thermal analysis data system (Perkin-Elmer DSC-7) [3].

Study was approved by IAEC (Approval Number: XI-8, CLBMCP-2004-2005). Male white rabbits weighing about 2.8 kg to 3.1 kg were used in this study. The animals were housed under standard environmental conditions (23±2û; 55±5% relative humidity; 12 h light/dark cycle). Prior to oral administration the rabbits were starved for 24 h and are allowed free access to tap water only. The animals (12) were divided into two groups of 6 each. To group I (standard group), marketed diltiazem hydrochloride capsule was administered. To the group II (test group) prepared microspheres (Formulation- VI) was administered. The capsule/microspheres were administered to the rabbit by gastric intubation method [9] . Blood samples (1 ml) were withdrawn from the marginal ear vein of the rabbit at regular interval of 2 h for period of 12 h. The plasma samples were separated by centrifugation and assayed for diltiazem hydrochloride by high performance liquid chromatography reported elsewhere [9]. Results of in vivo tests given in Table 2. 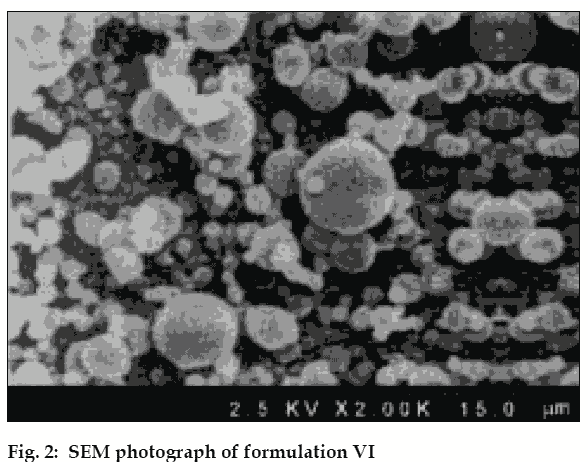