Formulation and evaluation of mouth dissolving tablets of cinnarizine.

The purpose of this research was to develop mouth dissolve tablets of cinnarizine by effervescent, superdisintegrant addition and sublimation methods. All the three formulations were evaluated for disintegration time, hardness and friability, among these superdisintegrant addition method showed lowest disintegration time; hence it was selected for further studies. Further nine batches (B1-B9) were prepared by using crospovidone, croscarmellose sodium and L-HPC in different concentrations such as 5, 7.5 and 10%. All the formulations were evaluated for weight variation, hardness, friability, drug content, in vitro disintegration time, wetting time, in vitro dissolution. Formulation with 10% L-HPC showed the less disintegration time (25.3 s) and less wetting time (29.1 s). In vitro dissolution studies showed total drug release at the end of 6 min.

Mouth dissolving tablet disintegrate or dissolve in saliva and are swallowed without the need for water. They offer an advantage over swallowing tablets and capsules. Difficulty to swallow is particularly experienced by pediatric and geriatric patients. Technique that are frequently employed in the preparation of mouth dissolving tablets include, freeze drying, sublimation, spray drying, moulding, mass extrusion and direct compression [1].

Cinnarizine is a H1-receptor antagonist that is widely used in the treatment of motion sickness, vomiting and vertigo. It is water insoluble and tasteless [2]. Hence it was select as a model drug for the preparation of mouth dissolving tablets. In the present work effervescent, superdisintegrant addition and sublimation technique were tried for formulation of tablets. Superdisintegrant addition method was found as best and further study carried out using three superdisintegrants in different ratios.

All the quantities are in mg. All the tablets contain 1% Aspartame, 1% Mgstearate and 2% Talc

For tablets prepared by effervescent method, specified quantity of cinnarizine, mannitol, Avicel 102, aspartame, talc and magnesium stearate were weighed accurately and passed through 60 # screen. Sodium bicarbonate and citric acid were accurately weighed and preheated at a temperature of 70o. All the materials were transferred to mortar and triturated till it mixed uniformly. The resulting powder mixture was compressed into tablets using single punch tablet machine using 9 mm flat surface punches [3].

For tablets prepared by sublimation technique, specified quantity of cinnarizine, camphor, mannitol, talc and magnesium stearate were weighed accurately and passed through 60 # screen prior to mixing. All the materials were transferred to mortar and triturated till it mixed uniformly. The resulting powder mixture was compressed into tablets using single punch tablet machine. The tablets were dried at 60o in oven till constant weigh obtained [4].

For tablets prepared by superdisintegrant addition method, specified quantities of cinnarizine, mannitol, Avicel 102, aspartame, crospovidone, talc and magnesium stearate were weighed accurately and passed through 60 # screen. All the materials were transferred to a mortar and triturated till it was uniform. The resulting powder blend was evaluated for angle of repose, bulk density, tap density and compressibility index [5] and compressed into tablets using single punch tablet machine [6]. Tablets thus prepared using this method was given in Table 2.

All the quantities are in mg. All the tablets contain 1% Aspartame, 1% Mg-stearate and 2% Talc

The prepared tablets were evaluated as per IP. Twenty tablets from each batch were weighed accurately and powdered powder equivalent to 100 mg cinnarizine was shaken with 100 ml of 0.1N HCl in 100 ml volumetric flask and from this 1 ml was pipette out and than dilute up to 100 ml. Resulting solution was filtered and assayed at 253.5 nm using double beem UV/Vis spectrometer and content of cinnarizine was calculated.

A piece of tissue paper folded double was placed in a Petri dish (internal diameter is 6.5 cm) containing 6 ml of water. The tablet was placed on the paper, and the time for complete wetting of the tablet was measured in seconds. The method was slightly modified by maintaining water at 37°. Wetting time corresponds to the time taken for the tablet to disintegrate when kept motionless on the tongue [8].

The drug-release study was carried out using a USP XXIV type-2 apparatus (Electrolab, TDT-06T, India) at 37±0.5° and at 50 rpm using 900 ml of 0.1N HCl as a dissolution medium (n=3). A sample (5 ml) of the solution was withdrawn from the dissolution apparatus at 2, 4, 6, 8 and 10 min and withdrawn volume was replaced with fresh dissolution media. The withdrawn samples filtered through a 0.45-micrometer membrane filter, diluted suitably, and analyzed spectrophotometrically. 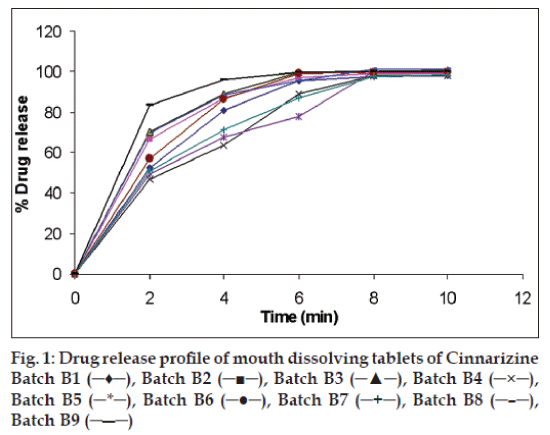 The mouth dissolving tablets of cinnarizine were prepared by superdisintegrants addition method using crospovidone, croscarmellose sodium and L-HPC in different concentration like 5%, 7.5% and 10%. There are total nine formulations were prepared and evaluated for various parameters. Formulation B9 containing L-HPC in concentration of 10% showed minimum disintegration time, wetting time as compare to other formulations. Results of dissolution studies showed that total drug was released in 6 min. The results shown that disintegration time was increased in the manners of L-HPC< crospovidone< croscarmellose sodium.

Authors thank Erica Pharma for providing the cinnarizine as a gift sample.