Oxcarbazepine, a new anticonvulsant drug, has been used as an add-on or first line treatment in adults and children. As precision of dosing and patient's compliance become important prerequisite for a long term antiepileptic treatment, there is a need to develop a formulation for this drug which overcomes problems such as difficulty in swallowing, inconvenience in administration while travelling and patient's acceptability. Hence, the present investigation was undertaken with a view to develop a fast dissolving tablet of oxcarbazepine which offers a new range of product having desired characteristics and intended benefits. Fast dissolve tablets of oxcarbazepine were prepared containing Avicel PH 102 as a diluent and Ac-Di-sol as a superdisintegrant by wet granulation process. All the formulations were evaluated for characteristics such as hardness, friability, weight variation, wetting ability, disintegration time and dissolution rate. A modified disintegration method was used for studying disintegration. Since the drug is poorly water soluble, drug release was tested in various media and the effect of surfactant on drug release was studied. An effective, pleasant tasting and stable formulation containing 12% Ac-Di-sol, 25% Avicel PH 102 and 8.5% starch as a binder was found to have a good hardness of 4-4.5 kg/cm2, disintegration time of 28±5 s and drug release of not less than 90% within 30 min. The drug release was found to be comparable to the marketed dispersible tablet.

Recent developments in technology have presented viable dosage alternatives for paediatric, geriatric, bedridden, nauseous or non compliant patients. Traditional tablets and capsules administered with 250 ml of water may be inconvenient or impractical for such patients. Hence, fast dissolving/disintegrating tablets (FDDTs) are a perfect fit for them. FDDTs dissolve or more commonly disintegrate rapidly in the saliva without the aid of water. Also, this dosage form offers an advantage of convenience of administration while travelling where there may not be an access to water. Moreover, this dosage form combines the advantages of both liquid and tablet formulation [1-3].

Many technologies have come up for fast dissolve tablets like Zydis, OraSolv, DuraSolv, FlashTab and WowTab. Technologies like Zydis, FlashTab have resulted in tablets with a very low disintegration time, but poor mechanical strength. On the other hand, techniques like OraSolv, DuraSolv have resulted in products with sufficient mechanical strength but a comparatively longer disintegration time [4,5].

Oxcarbazepine, a keto analogue of carbamazepine has been registered by US FDA in Dec 2001 [7]. It is used as an add-on or first line treatment in patients with generalized tonic clonic seizures and partial seizures with or without secondary generalization in adults and as an adjunctive in children [6]. The drug having half life of 2 h is completely absorbed and extensively metabolized to its pharmacologically active 10-monohydroxy metabolite, which has a half life of 9 h. Its pharmacological activity is primarily exerted through 10-monohydroxy metabolite [7,8]. Its insolubility in water and bland taste makes it an ideal candidate for fast disintegrating tablets with regards to palatability. Since epileptic patients have to strictly follow dosage regimen for preventing sub therapeutic concentration, FDDT will avoid missing out of dose even during travelling or other situations where there is no access to water. The present investigation deals with the development of an effective and stable FDDT of oxcarbazepine having adequate hardness, low disintegration time and pleasant taste.

Oxcarbazepine was procured from Glenmark Pharmaceuticals. Avicel PH 102 was procured from Signet Chemicals. Flavors and colors were obtained from Roshanlal distributors. All the other raw materials were of pharmacopoeial grade. Student t-test at 0.05 level of significance was used, wherever applicable.

Identification of the drug was carried out by FTIR (SHIMADZU 8400 S). Thin layer chromatography was developed in ethyl acetate: hexane (85:15) as mobile phase for identification. Solubility analysis of drug in various solvents and at various pH (4, 7 and 9.2) was carried out. Standardization of the drug was carried out using UV spectrophotometry (UV/Vis Spectrophotometer-1601 Shimadzu) and HPLC method (Jasco-2000) [13]. Differential scanning calorimetry (DSC) studies were also carried out at 30-300° for the diluents Avicel PH 102, pearlitol and lactose with the drug in 1:1 ratio to assess drug excipient compatibility (Mettler Toledo-DSC-822e).

Various formulations each containing 150 mg of drug were prepared using Avicel PH 102 (20-25%) as diluent, Ac-Di-sol (10-12%) as superdisintegrant and starch (8.5-10%) as binder (Table 1). The average weight of the tablet was 300 mg. To impart good mouth feel properties flavors such as mint, pineapple and sodium saccharin as a sweetener was incorporated. Granules were prepared by means of wet granulation method, lubricated with 1% talc and 1% aerosil and tablets were compressed on a Rimek K 10 station minipress, using 10 mm standard concave punch.

Tablets were evaluated for various parameters such as hardness, friability, weight variation, wetting ability [4,9], content uniformity, assay, disintegration time and in vitro drug release [10,11]. Disintegration testing (6 Tablets) was performed using modified method. After placing the tablet in #10 basket, the test was carried out in 25 ml of distilled water at temperature of 37° and agitation speed of 40 shakes per/min, using a mechanical shaker (Neolab reciprocating mechanical shaker).

Drug release was carried out using USP Type II apparatus in various dissolution media namely 0.1 N HCl, 1% v/v Tween 80 and (0.25-1% w/v) sodium lauryl sulphate (SLS) solution [12]. The release was tested at various rotational speeds of 50-75 rpm. Samples were withdrawn at various intervals within a period of 30 min and analyzed using UV/Vis spectrophotometer at wavelength of 255 nm [12,13]. The drug release of the tablets was also compared with that of the marketed dispersible tablet of oxcarbazepine. Students t test was applied to the method with n=6.

The results of preformulation studies indicated that the drug was of acceptable standards with 99.8% purity. Drug was found to be insoluble in water, insoluble in buffers and slightly soluble in organic solvents viz. ethanol, methanol and chloroform. Drug was standardized using UV and HPLC analysis which showed good linearity in the range 1 to 20 μg/ml (y= 0.0266x; r2= 0.9991) and 2.5 to 50 μg/ml (y= 34757x+7655.5; r2= 0.9999), respectively. From the DSC study results, Avicel PH 102 was selected as diluent because pearlitol and lactose showed incompatibility with the drug.

The addition of flavors and sweetener imparted pleasant taste to the formulation. As seen from Table 2, formulation F-1, F-5 and F-7 showed relatively lesser disintegration time. However, formulations F-5 and F-7 showed lesser hardness due to less amount of Avicel PH 102 which seemed to contribute to compactibilty (Table 2). Formulation F-1 and F-5 were further subjected to dissolution testing and their drug release profiles were wwwfound to be comparable. Since F-5 was found to be more friable, formulation F-1 was shortlisted for further stability studies. Also the drug release profile of F-1 was found to be comparable with the marketed dispersible tablet of oxcarbazepine and the difference in percent release at end of 30 min was not statistically significant at α = 0.05 level of significance and n=6 (fig. 1). 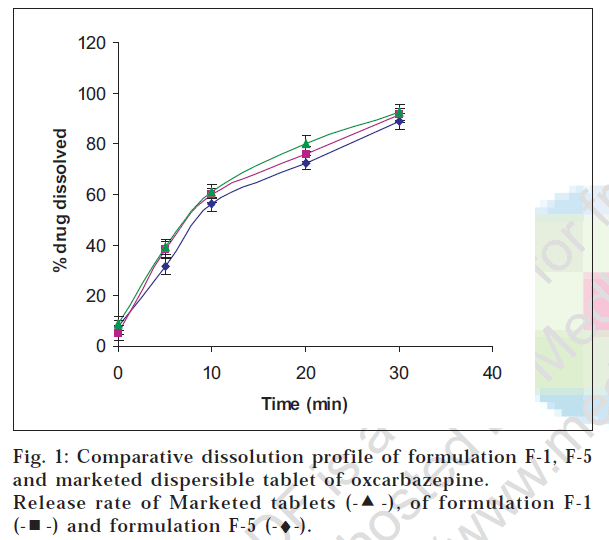 Table 2: Influence of Disintegrate and Binder on Tablet Characteristics.

Oxcarbazepine tablets are not official in any pharmacopoeia; hence its in vitro release testing was carried out based upon the dissolution profile of its analogue carbamazepine tablets which are official. The release was tested in SLS solution which is normally recommended for drugs having poor solubility. Drug release was found to be maximum in 1% w/v sodium lauryl sulphate solution at agitation speed of 75 rpm indicating that the drug release increased with the agitation speed and the level of sodium lauryl sulphate (figs. 2, 3 and 4). 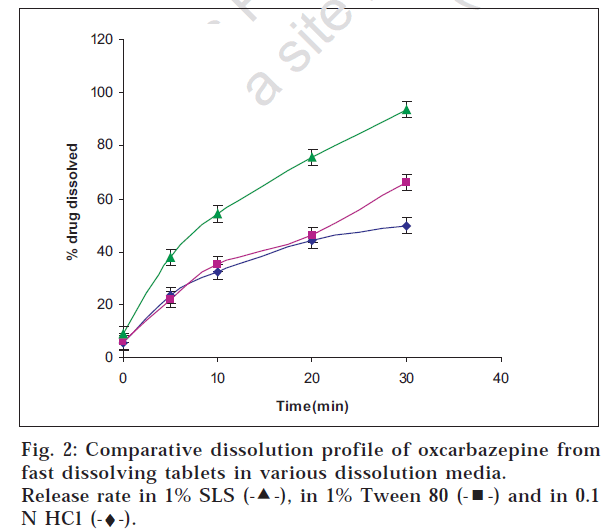 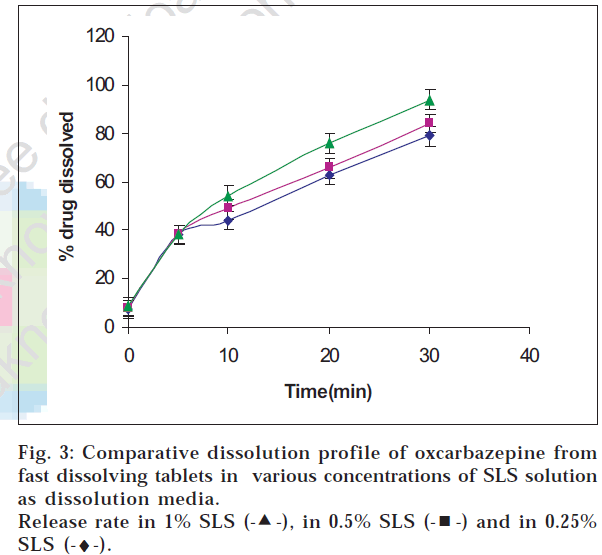 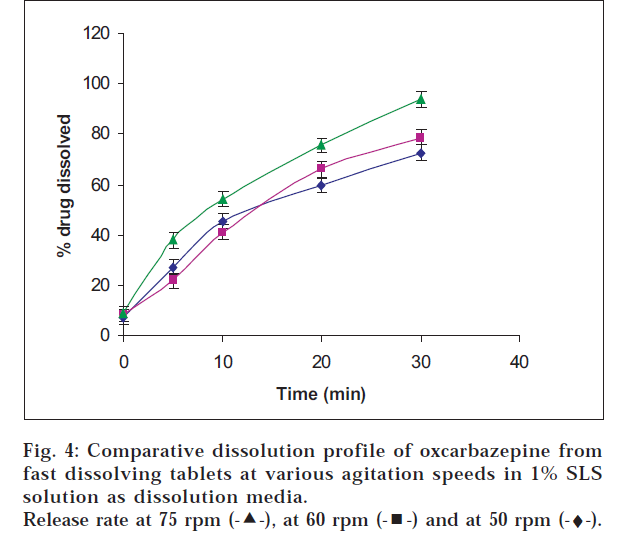 In stability indicating HPLC assay, the blank tablets did not show any significant peak at the drugs retention time, which indicated that the excipient did not interfere with the drug. The three mo tablet sample showed an area under the peak similar to zero mo sample yielding a drug content of 98.5% of the labelled claim. Also, there was absence of any extra peak in the chromatogram which proved that formulation F-1 was stable at the end of 3 mo period. Also other physicochemical properties were found to be within the limits.

In conclusion, a stable, effective and pleasant tasting fast dissolve tablet, which had a good balance over disintegration time and mechanical strength, was formulated using Ac-Di-sol (12%) as a superdisintegrant and 8.5% starch as binder. Even though the excipients employed are well known and established, they have not been used with oxcarbazepine for formulating fast dissolve tablets. Also such formulation is not available in the market. Above all the drug has a high dose and poor solubility due to which formulation of mouth disintegrating tablet of oxcarbazepine was challenging The formulation was also developed with the aim of having a balance over the hardness and disintegration time of the tablets using an economic, lab feasible method which is normally not seen in products formulated by technologies like Orasolv and Durasolv.

The authors would like to thank Dr Anandi Krishnan of Glenmark Pharmaceuticals, Roshanlal Distributors and Signet Chemicals for providing the drug and raw materials and Mr. P. S. Gide, Assistant Professor, Bharati Vidyapeeth’s College of Pharmacy for his help provided during this work.