Rectal drug delivery has a number of advantages such as reduced hepatic first pass elimination of high clearance drugs, avoidance of gastric irritation associated with certain drugs in case of nausea, vomiting and when the patient is unconscious. Rectal route of administration is specifi cally useful for infants and children who have diffi culty in swallowing oral medicine. Drug administered in suppository form can produce not only local effect but also systemic therapeutic action [1]. Suppositories can be prepared by using lipophilic bases like cocoa butter or by hydrophilic bases such as PEGs [2-4]. These suppositories melt or dissolve in body fl uids and release the drug, but are unstable at higher temperature. Agar has been recently used as base to produce non-disintegrating/ non-dissolving suppositories, which are stable at higher temperature [5,6]. Tramadol hydrochloride is a synthetic opioid analgesic used for moderate to severe pain like labor pain, traumatic pain, postoperative surgical pain and cancer pain. Tramadol hydrochloride can be administered orally, intravenously or rectally [7]. Tramadol hydrochloride is rapidly absorbed orally but is subjected to fi rst pass metabolism and only 68% is bioavailable after a single oral dose. Common side effects of tramadol hydrochloride include nausea, vomiting, dryness of mouth and sedation [8]. In the present study attempts were made to formulate rectal suppositories of tramadol hydrochloride with different bases like lipophilic base cocoa butter and hydrophilic bases PEGs and agar, as the rectal route avoids fi rst pass metabolism and side effects.

The drug content for agar and PEG suppositories was determined by soaking individual suppository in water for 30 min, broken with spatula, vortexed for 5 min, filtered, diluted to 50 ml with distilled water, then tramadol hydrochloride was estimated by Shimadzu UV/visible spectrophotometer at 271 nm. For cocoa butter suppositories, drug was extracted by heating the suppository in distilled water at 50° for 5 min, shaking the mixture in separating funnel, separated out the aqueous layer, diluted to 50 ml with distilled water and then estimated at 271 nm.

The hardness of the prepared suppositories was tested using Monsanto hardness tester. Hardness test or breaking strength test was carried to determine the tensile strength of the suppositories to access whether they will be able to withstand the hazards of packing and transporting [11].

USP tablet disintegration apparatus was employed to measure the melting range of PEG and cocoa butter suppositories [12]. The time taken for the entire suppositories to melt/disperse was measured when immersed in water bath maintained at constant temperature of 37±0.5°.

Ease of insertion of suppositories was evaluated in rabbits [5]. The results were represented as – poor, + fare, ++ good for ease of insertion. Liquefaction temperature/time test was done using fabricated instrument [13]. A big pipette was taken having a narrow opening on one side and broad opening on another side. The pipette was dipped in hot water maintained at 35±0.2° so that narrow end faces towards hot water. The sample suppository was introduced from the top of the pipette through broad end and carefully pushed down its length until it reaches narrow end. A glass rod was then inserted so that it rests over the suppository. The temperature at which the glass rods just come down was noted, that represents the liquefaction temperature. The time at which glass rod reaches to narrow end after complete melting of suppositories represents the liquefaction time.

The disintegration time [11] was recorded utilizing USP tablet disintegration tester containing distilled water at 37±0.5°. For in vitro dissolution studies an Electrolab USP XXIII dissolution apparatus was used [14]. The dissolution medium was 900 ml of distilled water, maintained at 37±0.5°. The suppository was placed in the metal basket and maintained at 50 rpm. Ten millilitres of sample was withdrawn at different intervals of time (10, 20, 30, 45, 60, 90, 120, 180, 240 min) and absorbance was measured at 271 nm. The study was performed for 4 h, except for PEG suppositories, which was studied for 30 min. 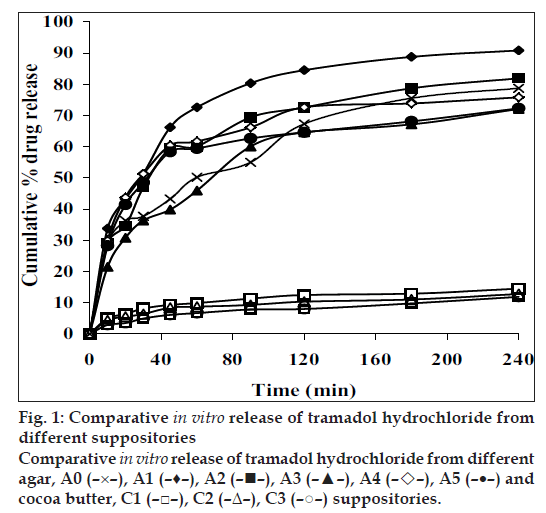 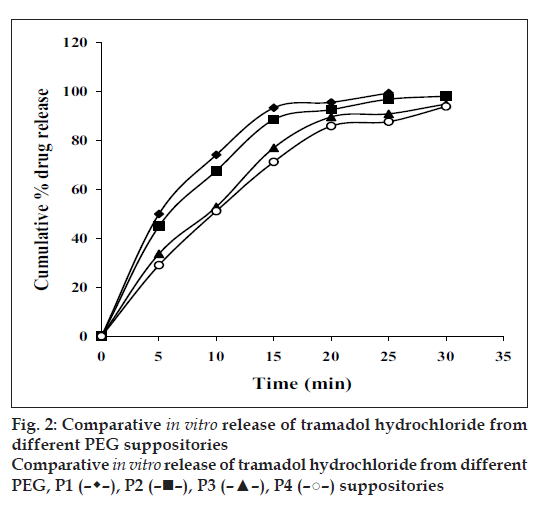 Thus the study suggested that the blends of PEG of low molecular weight (1000) with high molecular weight (4000 and 6000) in different percentage and agar in 10% w/w as base used to formulate conventional rapid release suppositories where as sustained release suppositories can be prepared by addition of PVP, HPMC in agar-based suppositories and by use of cocoa butter as base. Studies conducted so far yielded promising results, thus suggesting a scope for further pharmacokinetic evaluation.