Trimetazidine dihydrochloride, a cellular antiischemic agent indicated in the management and prophylaxis of angina pectoris is given as 20 mg thrice daily in the conventional dosage regimen. The purpose of the present study was to formulate and evaluate twice a day extended release tablets containing 30 mg trimetazidine dihydrochloride. The method developed to formulate these extended release tablets was melt congealing followed by wet granulation which exhibited uniform sustained release action and overcame the drawbacks of multidosing. The formulation was developed with Methocel® K100M and stearic acid as release retardant.

The term ‘controlled release’ refers to a system that delivers a drug continuously for a predetermined period with predictable and reproducible kinetics, and a known mechanism of release. Controlled release drug delivery systems are usually designed applying physical and polymer chemistry to produce a well characterised and reproducible dosage form that controls drug delivery to the body within the specifications of the required drug delivery profile [1]. Controlled drug delivery systems can be classified as, continuous release systems, e.g. dissolution [2], diffusion [3], ion exchange [3] and osmotically controlled systems [4]; delayed transit and continuous release systems, such as density based [5] and size based bioadhesive based systems [6]; delayed release systems that include intestinal and colonic release systems [7]. Melt congealing [8] is a process, which comprises of forming a molten mixture containing drug and pharmaceutically accepted carrier, delivering the molten mixture to an atomizing means to form droplets and congealing the droplets to form multiparticulates.

All the formulations as shown in Table 1 were developed using direct compression method. Extended release trimetazidine dihydrochloride tablets were formulated by direct compression method. All the ingredients were weighed and passed through 40#. The drug, diluents and polymer were blended in an octagonal blender for 10 min. Then the mixture was lubricated using talc and magnessium stearate in a blender for 5 min. Different polymers were used as release retardants such as Methocel® K100M, Eudragit® RSPO, Ethocel® and cellulose acetate. All the batches prepared are summerised in Table 1. The lubricated mixture was then compressed on a Cadmach tabletting machine (Cadmach Machinery Co. Pvt. Ltd. Ahmedabad, India) using 10 mm standard concave punches. Tablet weight was set at 250 mg with hardness of 5-6 kg/cm2. Release specifications were set at 90% release in 10h.

Formulations T12 and T13 were developed using melt congealing method. All the ingredients were weighed and passed through 40#. Drug was dispersed in molten stearic acid and congealed. The mass was then screened through 20#. This was blended in a blender with diluent and Methocel® K100M. Solution of polyvinyl pyrrolidone was prepared in isopropyl alcohol and was added to form a wet mass. The wet mass was passed through multimill having 8 mm screen. The wet mass was dried in fluidized bed dryer and dry granules were then passed through 20#. Dried granules were lubricated using talc and magnessium stearate and compressed on cadmach tabletting machine on 11 mm round flat faced punches with beveled edges. Tablet weight was fixed at 375 mg with hardness of 4-5 kg/cm2.

The granules were evaluated for flow properties like Carr’s index, Hausner’s ratio, density (bulk and tap density), angle of repose and loss on drying. The tablets were evaluated for physical appearance, diameter, thickness, hardness, friability, drug content and in vitro release studies. Drug content was determined using developed HPTLC method [12]. In vitro release studies were carried out using USP Type І dissolution apparatus containing 200 ml of pH 1.2 hydrochloric acid buffer for 2 h and Phosphate buffer pH 7.2 for remaining 8 h. The apparatus was operated at 100 rpm at a temperature of 37±0.5°. 5 ml aliquots were withdrawn at 0.5, 1, 1.5, 2, 3, 4, 5, 6, 8, 10 h intervals and absorbance was recorded using UV spectrophotometry at λmax of 269 nm.

The mechanism of drug release from the matrix tablet was analyzed using Korsmeyer-Peppas [13] equation where Mt/M∞ is the fractional solute release, t is the release time, k is a kinetic constant characterisic of the drug/polymer system, A is the area of the sample, cd is the tracer loading concentration and n is an exponent which characterises the mechanism of release of the tracers. Mt/M∞ = ktn (1), dMt/Adt = ncdktn-1 (2), when the diffusional release exponent (n) is equal to 1 then it characterizes zero order drug release behaviour.

In vitro drug release profile of the marketed trimetzidine dihydrochloride sustained release tablets was compared with the drug release profile of test product under similar experimental conditions. The data obtained from this drug release studies was used to determine the similarity factor between marketed and test product. Similarity factor was calculated using the formula shown in Eqn. 3, f2 = 50 log{ [ 1+(1/N)å(Ri – Ti)2]-0.5´100} (3), where N is number of time points, Ri and Ti are dissolution of reference and test products at time i. If f2 is greater than 50 then it is considered that 2 products have similar drug release behavior [14].

Accelerated stability studies [15] ensures stability of the product under exaggerated conditions of temperature and humidity. The optimized formulation was strip packed and subjected to stability studies at 25°/60%RH, 30°/65%RH and 40°/75%RH at regular intervals for 6 months. The tablets were evaluated for dimension, hardness, friability, drug content and in vitro release. Degradation was monitored by using stability indicating HPTLC method. 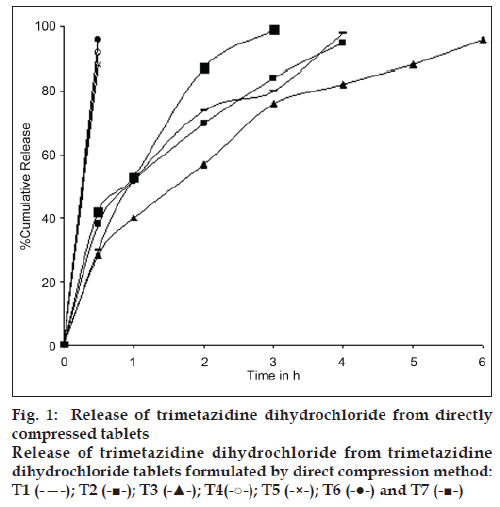 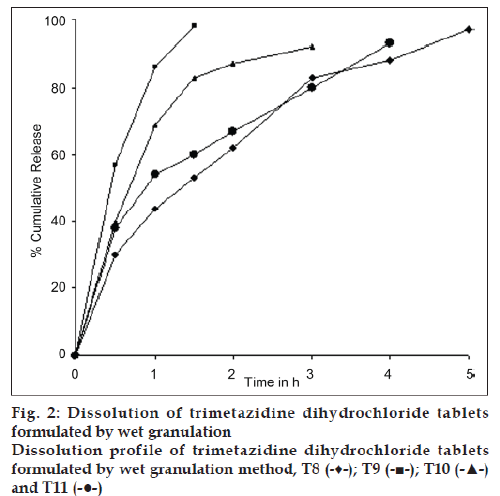 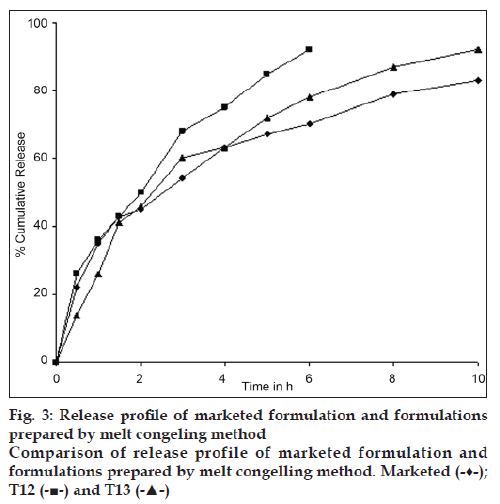 The results of the evaluation of tablets for appearance, tablet weight, diameter, thickness, hardness, friability is given in Table 3. The dissolution media used was 200 ml of pH 1.2 hydrochloric acid buffer for 2 h and phosphate buffer pH 7.2 for remaining 8 h. The basket type dissolution apparatus (Electrolab) was operated at 100 rpm; 37±0.5°. Formulations prepared using different combinations of polymers were tried and release was observed. Trimetazedine dihydrochloride tablets formulated by direct compression failed to give drug release as per desired specifications. The drug being highly water soluble and a hydrophilic material which allows quicker penetration of water in to the pores of the tablet system, resulted in faster drug release. Increase in cohesion and binding using PVA solution could not help in retardation of drug release. The probable reason of burst release could be insufficiency of hydrophobicity in the matrix. Hence, it was necessary to increase the hydrophobicity of the matrix.

Table 3: Evaluation Of The Formulation

Therefore, various wax systems in combination with different polymers were tried in order to increase the hydrophobicity of the system since the drug is highly water soluble. Thus tablets were formulated using Methocel® K100M, stearic acid, a wax system, dicalcium phosphate and other excipients by melt congealing method. Different ratios and combinations were tried to achieve a release of about 90% in 10 h.

Level of Methocel® K100M was varied from 120 mg to 180 mg and stearic acid from 90 mg to 150 mg. The amount of dihydrogen calcium phosphate was also varied from 2.5 mg to 3.75 mg. Formulation T13 having Methocel® K100M 180 mg and stearic acid 150 mg gave release according to set specifications and was compared with the marketed preparation. The tablet contains 48% of the polymer and 40% of stearic acid. The optimized formula concludes that not only high molecular weight polymer but also stearic acid wax system was required to obtain the tablet of our interest. The formulation, which gave release as per desired specifications, was subjected to stability studies.

The diffusional release exponent according to Korsmeyer Peppas Eqn. was found to be n = 0.6053, suggesting that the mechanism that leads to the diffusion of trimetazidine dihydrochloride from the sustained release tablets is anomalous (non-Fickian, drug diffusion in the hydrated matrix and polymer relaxation) diffusion [16-18].

The similarity factor f2 is the simple measure for the comparison of two dissolution profiles. It ensures the uniformity of product from batch to batch and help to predict bioavailability for formulation development. The similarity factor analysis between prepared tablets and marketed tablets showed the f2 factor (f2 = 66.81) greater than 50.

The f2 factor confirms that the formulated preparation T15 shows similar drug release as per marketed preparation. The results are summerized in Table 5. The developed product was found to be stable for 6 months under stability conditions.

Twice daily ER tablets of trimetazidine dihydrochloride containing 30 mg of drug were successfully formulated by melt congealing followed by wet granulation method and have a uniform sustained action with increased patient compliance to overcome the drawbacks of multidosing. Tablets which were formulated using drug, stearic acid and Methocel® K100M in the ratio of 1:5:6 gave release as per set specifications. Optimized formulation was subjected to accelerated stability studies at room temperature 30°/65% RH at regular intervals for 6 months. The formulation was found stable with no change in all the parameters and in vitro release. HPTLC did not show presence of any degradation products.

Authors are grateful to the UGC for providing junior research fellowship.