Hydroxypropylmethylcellulose (HPMC), a semisynthetic derivative of cellulose, is popular as a swellable and hydrophilic polymer. Its non-toxic nature and ease of handling makes it an excellent release retardant material. On exposure to aqueous fluids, the polymer in tablet hydrates to form a viscous gel layer through which the drug is released by diffusion and/or erosion of the matrix. The formulation factors influencing the drug release from hydrophilic matrices are polymer viscosity, polymer particle size, drug to polymer ratio, drug solubility, drug particle size, drug loading, compression force, tablet shape, formulation excipients, coatings, and processing techniques [1-4]. The dissolution can be either disentanglement or diffusion controlled, depending on the polymer molecular weight and the thickness of the diffusion boundary layer [5].

Tuberculosis (TB), a rampant infectious disease, is considered to be the foremost cause of death from a single microorganism. Annually worldwide, of the 8 million people who actively manifest the disease, 3 million die [6]. Chemotherapy of TB is complicated by the need of multi-drug regimens given over a long period. Development of delivery system that releases drug in a sustained manner at therapeutic concentration over a period of time can ensure patient compliance and may also minimize the risk of emergence of drug resistant mutants and potential toxicity.

Isoniazid (300 mg) is a first-line drug recommended by World Health Organization (WHO) for the treatment of tuberculosis. The high solubility in the aqueous medium, shorter half-life (1.5 to 4.5 h) and absorption throughout gastrointestinal tract, indicates that it is a better candidate for sustained drug delivery system. During the last few years, various carrier systems, like microparticles, stealth liposome and microspheres have been developed for the sustained delivery of isoniazid for better chemotherapeutic efficacy against tuberculosis [7-9]. However, these formulations have to be injected either subcutaneously or intravenously. The parenteral route is not suitable for long-term treatment. Hence, there is a need to develop an oral drug delivery system that is convenient for the patients.

Jain and co-workers formulated controlled released tablet of isoniazid using guar and karaya gums alone and in combination with HPMC. The tablets exhibited non-Fickian release profile with rapid initial release and showed better in vitro and in vivo correlation (r = 0.9794) [10]. Bulutoner and co-workers investigated polymethylacrylate, polyvinylchloride and Carbomer® as a matrixing agent for isoniazid formulations. They reported Carbomer® is the best matrixing agent for isoniazid [11]. Lucinda-Silva and Evangelist encapsulated isoniazid in the microspheres of alginate and chitosan. Half of the drug was released within 2.5 h [12]. Sharma and co-workers fabricated lectin-functionalized poly (lactide-co-glycolide) nanoparticles as oral/ aerosolized antitubercular drug carriers for treatment of tuberculosis [13]. The natural matrixing agents are less preferred at industry due to non-consistency in quality and compression problems. Scale-up problems are experienced with microspheres and nonoparticles. The major advantages of HPMC are directly compressible, gelling on exposure to aqueous media, releases the drug by the mechanism of erosion and/or diffusion. The objective of the present work was to fabricate sustained release formulation of isoniazid using a single synthetic excipient (HPMC).

The modified release monolithic tablet formulation consisting of Methocel, isoniazid and DCP were prepared. The polymer concentration was varied while the drug content (300 mg) and the total tablet weight (650 mg) were kept constant. The composition of various tablet formulations is given in Tables 1-3. The ingredients were individually passed through 40# sieve and mixed for 15 min. The mixture was lubricated with magnesium stearate (1%) and Cab-O-Sil (1%) and compressed into tablets using a single punch tablet machine (Cadmach Machinery, Ahmedabad). The compressed tablets were evaluated for physical parameters such as crushing strength, friability, uniformity of weight and in vitro drug dissolution study.

A glass funnel was secured with its tip at a given height (h) above a graph paper placed on a horizontal surface. Powder was poured through the funnel until the apex of conical pile touched the tip of the funnel and then the angle of repose (Ø) was calculated using the following formula, tan Ø=h/r, where r is the radius of conical pile.

The diameter, thickness, and crushing strength of ten randomly selected tablets per batch were determined using Dr. Scheleuniger® (Pharmatron 8M, Germany) hardness tester. Twenty tablets were rotated in a friabilator (Model EF2, Electrolab, India) at 25 rpm for 4 min. The tablets were then dedusted, and the loss in weight due to fracture or abrasion was recorded as percentage weight loss (% friability).

The dissolution study was performed in a calibrated dissolution test apparatus (Electrolab, TDT 06-T, Mumbai) equipped with a basket employing 900 ml of pH 1.2 (0.1 N HCl) solution for first 2 h and pH 6.8 buffer (Phosphate buffer) solution for additional 22 h. The baskets were rotated at 50 rpm and the dissolution media were maintained at 37±2°. Five ml of samples were withdrawn and analyzed spectrophotometrically at 263 nm using a UV/Vis spectrophotometer (Model 1700, Shimadzu, Kyoto, Japan) after suitable dilution of the samples. The fresh dissolution medium was replaced after each withdrawal.

Analysis of the in vitro data

The method of Bamba et al. was adopted to ascertain kinetics of drug release14. Data from the in vitro drug release were analyzed by different kinetic models (Table 4) in order to evaluate the release mechanism of INH from the matrices. A Fortran software, developed in-house, was used. The F-value was employed to select the most appropriate kinetic model.

The angle of repose of the formulations containing different grades of Methocel were comparable (Tables 1-3). As per USP15, the powder blend of all the batches exhibited excellent flow. The crushing strength of all the tablets was in the range of 9 kp to 11 kp. The loss in total weight of the tablets due to friability was less than 0.5%. The high value of crushing strength and low friability indicated that the compressibility of INH and adjuvants was good.

Plots of percent cumulative drug released versus time for all tablet formulations are shown in figs. 1-3. The drug release profiles were characterized by an initial burst effect (more than 20% drug release in first hour and slow release thereafter). The biphasic release is often observed from hydrophilic matrix systems. As the release-rate-limiting polymer changes from a glassy state to a rubbery state, a gel structure is formed around the tablet matrix, which considerably decreases the release of the drug since the drug has to diffuse through this gel barrier into the bulk phase. The strength of the gel depends on the chemical structure and molecular size of the polymer [16-19]. 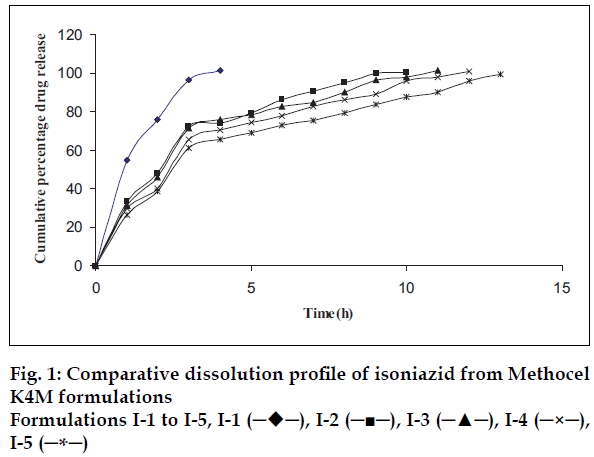 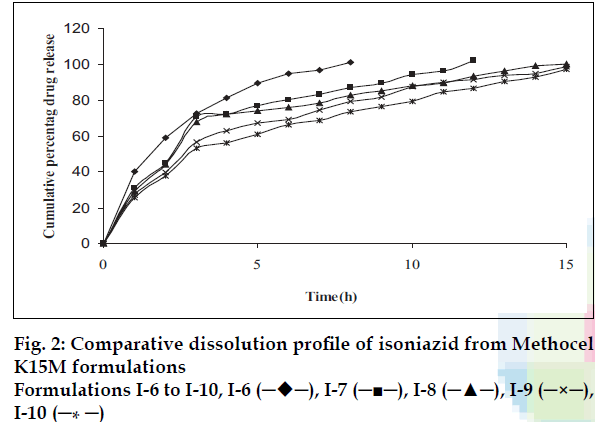 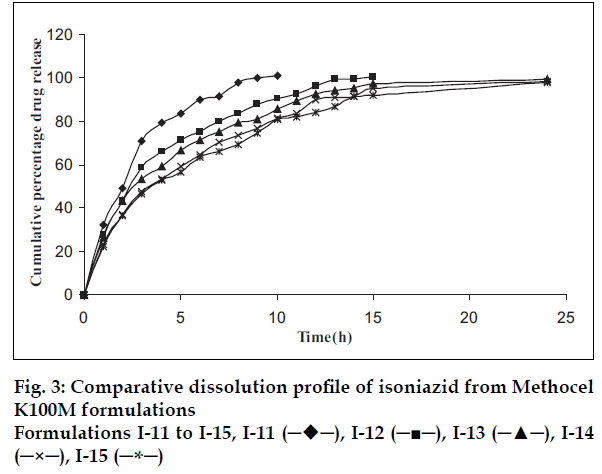 The results in fig. 1 show that the low viscosity grade (Methocel K4M) was not able to extend the drug release up to 24 h. Batches I-4 and I-5 showed the extended release up to 12 h with the initial burst release. The DCP is non-gelling acid soluble excipient. The results shown in figs. 1-3 reveal that as the concentration of DCP was increased, the drug release rate was enhanced. Fast drug release from batches may be attributed to dissolution of DCP in acidic dissolution medium and subsequent increase in porosity of tablets. The size and surface area of the tablets were kept constant by adding required quantity of DCP, as it is well known fact that the drug release is also dependent on the size of matrix tablets. Dibasic calcium phosphate also contributes compressibility to the powder blend due to its high fragmentation propensity. While with medium viscosity grade polymer (Methocel K15M), the release was extended further (beyond 12 h) with burst release. Fig. 2 shows that more than 20% drug was released from all the batches in first hour. The required release profile with suitable drug release in 1 h (approximately 20%) was obtained with 40-50% Methocel K100M as shown in fig. 3.

A characteristic drug release profile of the matrix type drug delivery systems is represented by the Weibull’s equation [22,23].

where, m is the cumulative amount of drug released after time t, β is shape parameter and α is the scale parameter. The term α is replaced by the term Td (α = (Td) β). The parameter Td is the time necessary to dissolve 63.2% of the drug. Model validation was done by comparing the values of observed and predicted drug release for three formulations as well as for a check-point batch containing 46.15% drug and 47% matrixing agent. The observed and predicted values for check-point batch are depicted in fig. 4. The theoretical and experimental release profiles showed insignificant difference. The results revealed that the matrix system fabricated with 47% Methocel K100M was able to provide required release in first hour and a modified release profile thereafter. 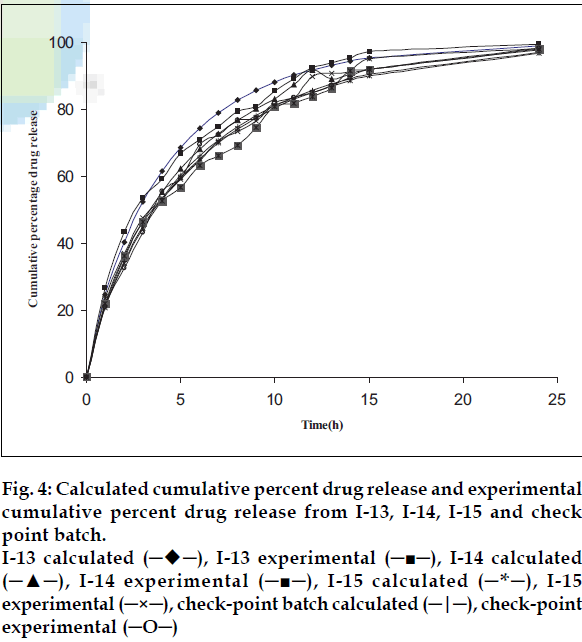 The results of this investigation enabled us to fabricate hydrophilic matrices containing isoniazid (a first line antitubercular drug). It was also demonstrated that the release of isoniazid from directly compressed matrix tablets could be modified by changing the type and amount of polymer in the matrix tablets. Fine tuning of formulation could be done by adopting a simple optimization procedure.