The aim of the present study was to develop a tablet formulation with improved dissolution of glimepiride. Glimepiride was loaded into two types of mesoporous silica particles via solvent-incubation method. Physicochemical characterization of the particles was carried out by transmission electron microscopy, infrared spectroscopy, dynamic light scattering and thermogravimetric analysis. Flowability and compressibility characteristics of the powder mixtures, containing pure glimepiride as well as both types of drug-loaded silica particles and excipients were evaluated by bulk and tapped density and angle of repose. Tablets were prepared by direct compression method and consequently tested for hardness, friability, disintegration and in vitro release properties. In vitro release studies demonstrated that the glimepiride dissolution rate was notably improved from tablets prepared with both types mesoporous silica particles as compared with the bulk drug.

Glimepiride, chemically 1-(p-(2-(3-ethyle-4-methyl- 2-oxo-3-pyrroline-1-carboxamido)ethyl) phenyl) sulfonyl)-3-(trans-4-methylcyclohexyl) is a third generation hypoglycemic sulfonylurea used in the treatment of non-insulin-dependent diabetes mellitus [1]. Glimepiride is a class II drugs according to the biopharmaceutical classification system. This class of drugs typically exhibit variable absorption from gastrointestinal tract due to their low solubility in GI fluids. Despite their good permeability these drugs show low pH-dependent solubility, which may cause poor dissolution and unpredicted bioavailability [2,3]. Oral absorption of glimepiride is dissolution rate limited, therefore it displays erratic oral bioavailability, which can lead to irreproducible clinical response or in some cases therapeutic failure [4-6]. These properties of glimepiride give rise to difficulties in the design of pharmaceutical formulations and led to variable oral bioavailability [7,8]. In this view, different methods were applied aiming to improve water solubility of glimepiride, e.g. inclusion complexes with cyclodextrins, solid dispersions using either water soluble [9] or insoluble carriers [10,11].

Mesoporous silica materials (MSM) have been used as a potential drug delivery carrier for poorly soluble drugs [12]. Their attractive characteristics are high surface area, large pore volume, tunable pore size, narrow distribution, good biocompatibility and chemical inertness. Some of these characteristics are related with the opportunity to improve oral bioavailability of poorly soluble drugs via improved drug dissolution rate [13-16]. Loading of poorly water soluble drugs into the pores of mesoporous silica restricts their crystallization and improves drug dissolution from the materials compared to the bulk drug molecules [12]. The aim of this study was to prepare and characterize tablets with improved dissolution properties of glimepiride, based on MCM- 41 and hexagonal mesoporous silica (HMS) materials. The formulation of glimepiride-loaded mesoporous silica in tablets could combine high chemical and physical stability and reproducible release behaviour.

Glimepiride (100 mg) was dissolved in 8 ml of dichloromethane. Then 100 mg particles (MCM-41 or HMS) preheated for 1 h at 120° were added to the glimepiride solution. The mixture was incubated at 37° with permanent stirring (180 rpm). Whereafter, 25 ml of ethanol were added and the dichloromethane was removed by vacuum distillation. The procedure continued with addition of water and extraction of ethanol. Finally, the dispersion was filtered through a 0.1 μm membrane filter, washed with ethanol and dried in a vacuum desiccator for 24 h.

Characterization of MCM-41 and HMS particles:

The porous structure of the samples was characterized using a transmission electron microscopy (TEM, Jeol JEM 2100 HR STEM, 200KV; point-resolution 0.23 nm). Attenuated total reflection infrared spectra were recorded by spectrometer Nicolette 400. The IR spectra, in absorbance mode, were obtained over the spectral region from 400 to 4000 cm-1.

Determinations of nanoparticle size, polydispersity index (PI) and zeta potential were performed using a Zetasizer (Malvern Instruments, Worcestershire, UK). The samples were dispersed in deionized water and measured at a scattering angle of 90° and 25°. The measurements were made in triplicate. Thermo gravimetric analysis (TGA) was performed using a TGA-50 instrument (Shimadzu, Japan) at a heating rate of 10°/min under a nitrogen purge of 40 ml/min.

Preparation and characterization of tablets:

The composition of tablets containing pure glimepiride or glimepiride-loaded mesoporous silica nanoparticles is presented in Table 1. The mixture of respective nanoparticles and the excipients were directly compressed using a single punch tablet press (Erweka AR401, Germany) equipped with a 9 mm diameter punches with flat faces. The crushing strength of the tablets was determined as the force (N) needed to break the tablet diametrically (apparatus Erweka TBH 30, Germany). The friability of tablets was determined using a friabilator (Pharma test PTF 20 ER, Germany) at a speed of 25 rpm for 4 min. The percent weight loss was expressed as the tablet friability. Tablet disintegration time was measured according to European Pharmacopoeia with a disintegration tester (Erweka ZT 72, Erweka, Germany). The basket rack assembly was positioned in one litre of pH 6.8 phosphate buffer at 37±2°. The time taken for complete disintegration of the tablet with no palpable mass remaining in the apparatus was measured in minutes.

For the in vitro release studies, tablets containing 2 mg glimepiride (pure or loaded into MCM-41 and HMS particles) were incubated in 900 ml phosphate buffer with pH-value of 6 and 8. Sodium lauryl sulfate (2 %) was added to the medium. The dissolution tests were performed by paddle method with a stirring rate of 100 rpm at 37° (Copley Scientific DIS 8000, type NE6- COPD). Samples were withdrawn at appropriate time intervals and replaced by fresh buffer. The samples collected were centrifuged at 15 000 rpm for 15 min and the concentration of the released glimepiride was determined using UV-spectrophotometry at a wavelength of 230 nm (Thermo Fisher Scientific EVO300 PC, US).

TEM were used to determine the particle morphology and structure of the mesoporous materials. As shown in TEM images (figure 1), MCM-41 with defined hexagonal pores (figure 1a) had matrix structure while HMS (figure 1b) had a hollow core and mesoporous shell. Both types of particles exhibit spherical shape. The images presented preserved porous structure after drug-loading for both types of silica particles (figure 1c and d). No significant changes were observed after drug-loading procedures. This fact confirms literature data for high mechanical stability of mesoporous silica particles, which is prerequisite for further tableting of these particles. Fourier-transform infrared spectroscopy (FTIR) spectroscopy was performed aiming to evaluate the eventual changes after glimepiride loading into mesoporous silica nanoparticles. It is generally agreed that bands at 1100-1000 cm-1 are caused by the internal vibrations [18]. Our results indicated that the bands observed at 1020-1080 cm-1 can be attributed to the asymmetric stretching vibration of silica structure (Si-O-Si). Further, the FTIR spectra revealed characteristic absorption peaks of pure glimepiride at 3368, 1344, 1704 cm-1 corresponding to N-H, O=S=O, C=O (figure 2). Similar absorption peaks were registered in the spectra of glimepiride-loaded MCM/glimepiride and HMS/glimepiride. These data suggested that there were no considerable changes in IR peaks of loaded and non-loaded glimepiride, which indicated that glimepiride was physically included into the carriers.

Dynamic light scattering showed an average diameter less than 600 nm and moderate PI for the pure particles that correlated with TEM observations. The size of the loaded mesoporous silica nanoparticles (figure 3a) and PI slightly increased after drug loading (figure 3b). Zetapotential values of both types of mesoporous particles were negative, which is typical for these types of MSM (figure 3c). The surface charge of MCM-41 and HMS particles was similar and comparable to the results of other authors [19]. Slight increase of zeta-potential for glimepiride-loaded particles was observed. However, the change was insignificant and could not be considered as a premise for altered physical stability. The amount of the loaded glimepiride was measured by TG analysis [20,21]. Figure 4 shows the DTA heat flow vs. T curve, denoting the mass loss while heating. The glimepiride weight lost comes to 100 % at temperature interval 500-600° (figure 4, black curve). At temperatures over 700° the carriers undergo some weight losses (figure 4), which probably were connected with structural chances of the carriers. It was found that for MCM- 41 weight loss was approximately 5 % due to carrier dehydration compared to 2 % for the HMS. Our results showed that at equal conditions MCM-41 can load 45 % glimepiride while for HMS the loading capacity reached 65 %. The difference in drug loading can be explained with the different structure of the particles and the higher total free volume of HMS particles (1.28 cm3/g, compared to 1.07 cm3/g for MCM-41 particles). 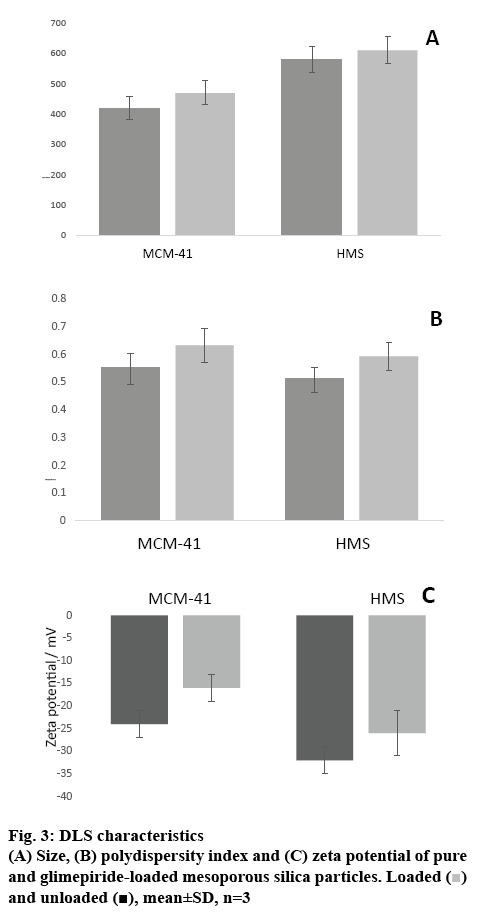 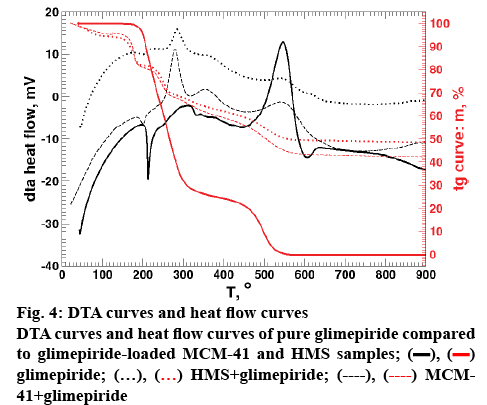 The flowability and compressibility of the mixtures containing pure of encapsulated glimepiride were studied in order to evaluate the possibility for direct compression. The angle of repose defined for pure glimepiride and the drug loaded MCM and HMS particles indicated poor flowability (Table 2) [22]. An angle of repose higher than 40 degrees indicates that the powder requires flowability improvement. The calculation of Hausner ratio resulted in values between 1.35 and 1.45, which indicated poor flowability according to USP (Table 2). Thus, due to the poor flowability we developed powder mixtures containing silicon dioxide as a glidant [23,24]. Aiming to prepare the tablets by a simple direct compression microcrystalline cellulose type Avicel PH 102 was used as a binder. Cross-linked sodium carboxymethylcellulose (croscarmellose) was used as disintegration agent and magnesium stearate like lubricant. Determination of the angle of repose of the developed powder mixtures showed remarkable decrease of the angle. Similarly, the values of Hausner ratio decreased to 1.12-1.18 suggesting an improved flowability [25]. The results obtained by calculation of Carr index (figure 5) showed poor compressibility of pure glimepiride and the loaded mesoporous particles and good compressibility of the mixtures containing the excipients. The achievement of good flowability and compressibility allowed direct compression of the mixtures. The resulted tablets were evaluated for mass uniformity. Тhe deviation from the average mass of 20 tablets between 80 and 250 mg should be ±7.5 % for 18 tablets and ±15 % for two tablets (European Pharmacopeia). The developed tablets passed the test for the mass uniformity. The crushing strength of the tablets varied between 50 and 60 N. Friability of the tablet formulations indicated good resistance of the tablets during further handling and storage (Table 3). A maximum weight loss obtained from the mean of three tests was not more than 1.0 %, which fulfilled the requirement of European Pharmacopeia. 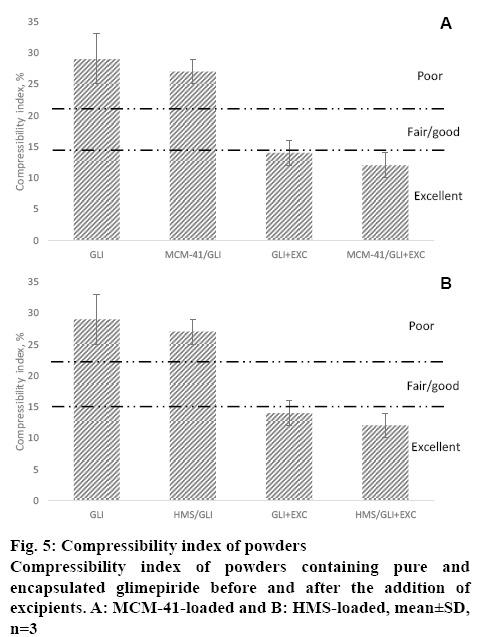 In vitro release studies were performed in phosphate buffer with a pH-value of 6.8 (figure 6). The results showed a remarkable difference between release profiles of tablets containing pure glimepiride, MCM/ glimepiride and HMS/glimepiride particles. Tablets with pure glimepiride showed dissolution of 30 % for two hours. Glimepiride released from tablets prepared with MCM and HMS-loaded particles showed 100 and 93 %, respectively. Tablets, containing HMS-loaded particles showed slower release rate most likely due to the hollow core of HMS, associated with higher possibility for recrystallization. The initial burst release of glimepiride attributed to the presence of glimepiride in the external part of the pores of loaded particles, which allows a certain amount of glimepiride to be released quickly. In our opinion, the improvement of the dissolution rate of tablets containing encapsulated glimepiride was due to amorphization of the drug in mesoporous carriers [26]. Similar amorphization and improvement of dissolution profile of glimepiride was reported for formulation of solid dispersions of glimepiride and their consequent tableting [27]. The theory of homogeneous nucleation claims that crystal growth occurs spontaneously when a critical size of the nucleus is reached. If the groups of molecules are spatially restricted before reaching a critical nucleation size, growth will be prevented and the drug will exist in a non-crystalline state. In the pores of MSM-41, nucleation occurs in the confined space, which prevents the critical mass from reaching the nuclei, and the drug substance is preserved in an amorphous state. Based on the reduction in free energy of Gibbs, this type of amorphous system is physically stable. 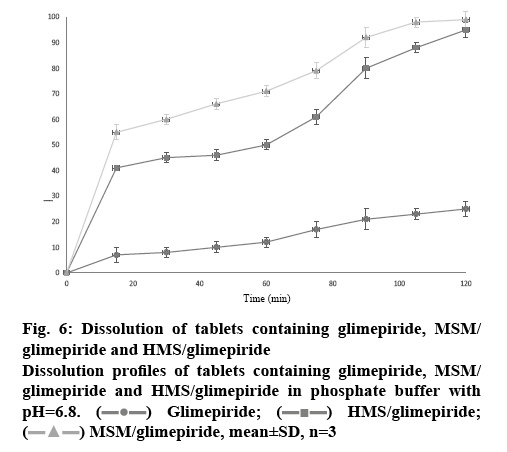