In the present study a hydrodynamically balanced system of celiprolol hydrochloride was developed as single unit floating capsule. Various grades of low density polymers were used for formulation of this system. They were prepared by physical blending of celiprolol hydrochloride and the polymer in varying ratios. The formulation was optimized on the basis of in vitro buoyancy and in vitro release in citrate phosphate buffer at pH 3.0. Effect of various release modifiers was studied to ensure the delivery of drug from the hydrodynamically balanced system capsule over a period of 12 h. Capsule prepared with HPMC K4 M and liquid paraffin gave the best in vitro percentage release and was taken as optimized formulation. By fitting the data in zero order, first order and Higuchi model it could be concluded that the release followed zero order release, as the correlation coefficient was higher for zero order release. It could be concluded from R 2 value for Higuchi model and K-Peppas model that drug release followed fickian diffusion mechanism.

Drug absorption from gastrointestinal tract is a complex procedure and is subject to many variables. It has been reported that the extent of gastrointestinal tract drug absorption is related to contact time with the small intestinal mucosa. Gastroretentive system can remain in the gastric region for several hours and therefore significantly prolong the gastric residence time of drugs. Many approaches have been reported in the literature for the formulation of gastroretentive system viz. mucoadhesion [1-2], floatation, sedimentation [3-5], expansion [6-7] and modified shape systems [8-9]. Both single and multiple systems have been reported in the literature [10]. Floating drug delivery offers a number of applications for drugs having poor bioavailability because of narrow absorption window in the upper part of gastrointestinal tract. It retains the dosage form at the site of absorption and thus enhances the bioavailability

Celiprolol hydrochloride (CEH) is an antihypertensive agent that antagonizes the action of β1-receptor. It has been reported that the absolute bioavailability of celiprolol when given orally is 30-70%. The biological half life of celiprolol hydrochloride is 4-6 h and the main site of absorption is proximal small intestine. A hydrodynamically balanced system (HBS) is planned for CEH, as such a system when administered would remain buoyant on the gastric fluids for a prolonged period of time and the drug would be available at the main site of its absorption i.e. proximal small intestine resulting in enhanced bioavailability.

Single unit capsules were formulated with the help of different low density polymers, which upon administration would attain a density of less than that of the gastric fluids and therefore would float (Table 1). On the basis of floatation HPMC K4M was selected for further studies. 200 mg of celiprolol and different ratios of the polymer were accurately weighed and were physically blended in a glass mortar and pestle and filled in a hard gelatin capsule (size 00). Total weight of capsule was kept 400 mg. The formula of various formulations is given in the Table 2. 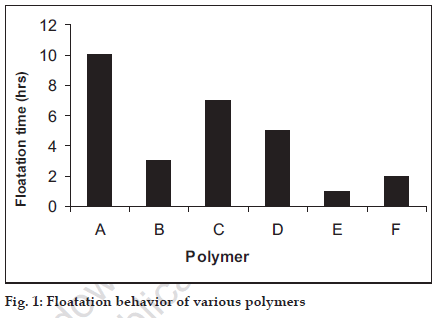 The capsules were immersed in 900 ml of citrate buffer pH 3, simulating the fed state of stomach, in USP paddle apparatus at 100 rpm. The time for which the capsule remained buoyant was observed and was taken as the floating time. The polymer that showed the best floating behavior was taken for in vitro release studies (fig. 1).

Based on the in vitro buoyancy studies, formulations showing good floatation were subjected to in vitro release studies. In vitro studies were carried out by carrying out the dissolution studies in USP paddle type apparatus at 100 rpm using 900 ml of citrate buffer pH 3.0. The samples were withdrawn at regular intervals and replaced with the blank buffer. Sample were analyzed by spectrophotometrically (Shimadzu UV 1601) at 232 nm.

Ethylcellulose (EC), Polyethylene oxide (PEO) WSR 60K and liquid paraffin were used at different concentration as shown in Table 2. For addition of ethyl cellulose (5-25%) to the formulation corresponding solution of ethyl cellulose was made in acetone and granulated with weighed drug content and HPMC K4 M and were allowed to dry at 30°. The granules were passed through sieve no 44 and 400 mg of granules equivalent to 200 mg of the drug were filled in capsule. PEO was added in dry form. Liquid paraffin (1%, 1.5% and 2%) was added by making a solution in isopropanol, granules were prepared, dried and passed through the sieve no 25 mesh and filled in to capsules.

Analysis of in vitro drug release

To analyze the mechanism of drug release from the capsules, the in vitro dissolution data was fitted to zero order, first order [11], Higuchi release model [12] and Korsemeyer and Peppas model [13-14].

Stability studies were carried out according to ICH guidelines by storing the optimized formulation at 40°C/75±5% RH for a period of three months. The samples were withdrawn at 30, 60 and 90 d and analyzed for drug content and dissolution study as given in in vitro release studies by an HPLC method. The chromatographic column used was C18. Mobile phase used was acetonitrile:phosphate buffer pH 3.0 (30:70), with 0.1% triethylamine, a stability indicating method. Flow rate was kept at 0.8 ml/min [15].

The in vitro release studies revealed that the formulation remained buoyant but probably because of the high aqueous solubility of (CEH), the release could not be sustained. Only formulation containing HPMC K4M could sustained the drug release up to 9 h therefore it is decided to add release modifier to these formulations (Table 2) so as to aid the sustained release of the drug from the formulation.

The in vitro release pattern of the optimized formulation was analyzed by fitting the dissolution data in to various kinetics models. It was observed that R2 value was higher when fitted to zero order equation (fig. 5), Table 3, followed by Higuchi model (fig. 6), as compared to first order equation (fig. 7), which indicated a zero order release from the optimized HBS capsule for celiprolol hydrochloride. As the n value for the k-Peppas model was found to be less than 0.5 (0.438) it suggests that release from the optimized formulation follows fickian diffusion mechanism (fig. 8). 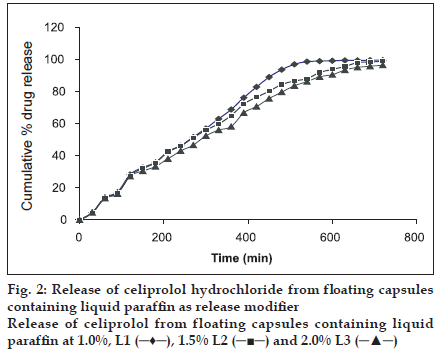 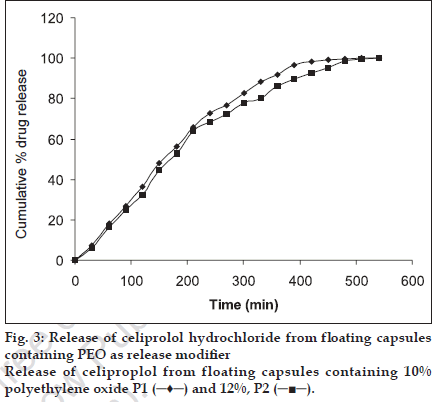 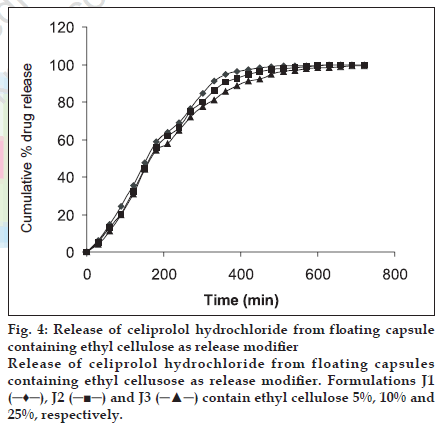 Stability studies revealed that the drug content in HBS capsule degraded by 0.76% in a period of 90 d. (fig. 9). Hence a shelf life of 1.9 years could be assigned to the above formulation. Dissolution profile for stability sample showed that there was no significant change in the release rate of the drug from optimized capsule kept on stability studies (fig. 10). 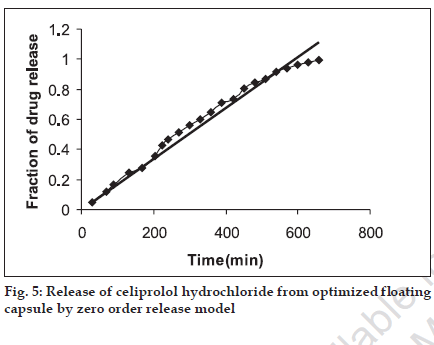 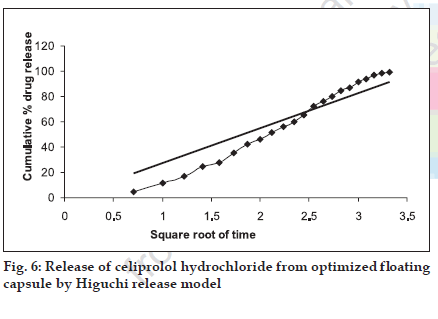 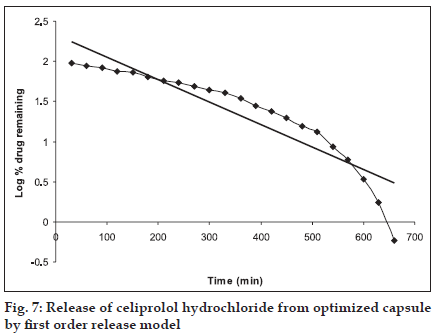 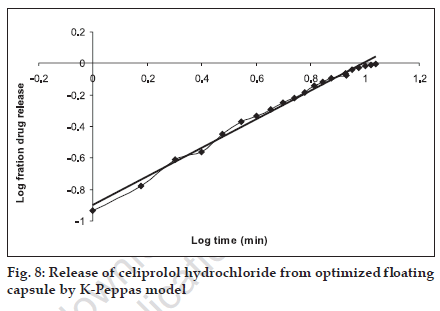 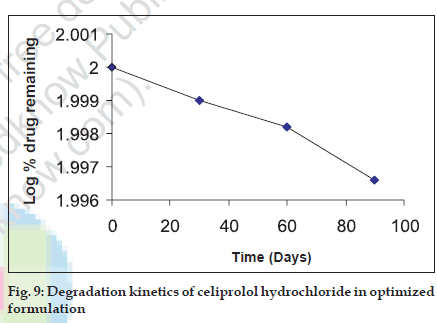 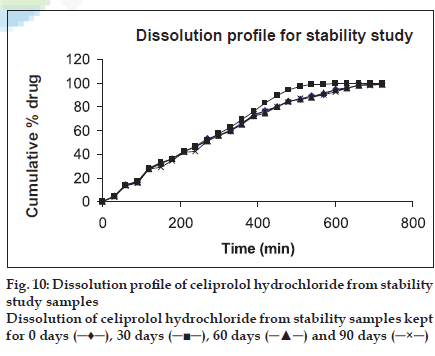 The authors are grateful to Department of science and Technology, Govt. of India for financial support to the project and Jamia Hamdard for providing facilities to carry out the experiments.