Smo siRNA is one of the p63 gene transcription products, which is related to the degree of tissue differentiation and prognosis of human T-lymphoblast MOLT-4 cells. Patients with low expression of Smo siRNA have a higher risk of tumor metastasis and recurrence, and the prognosis is worse [1,2]. In this study, MOLT-4 cell line treated with Smo siRNA was established by in vitro gene transfection technology and the gene expression profile was detected using a gene chip. The related genes and signal pathways were analyzed by bioinformatics technology. The potential target genes directly or indirectly regulated by Smo siRNA were predicted and the role and regulation mechanism of MOLT-4 cells in the development and progression of Smo siRNA treatment were analyzed [3-6].

The full-length Smo siRNA cDNA was amplified and ligated into the pLVX-IRES-ZsGreen1 lentiviral vector digested with Xho I and BamH I to construct the recombinant lentiviral plasmid pLVX-IRESZsGreenl+ Smo siRNA, which was sent to a Gene Company for sequencing and identification. The Plasmid Midi Kit was used to purify the recombinant virus plasmid (or empty vector) with no endotoxin and its 2 auxiliary packaging plasmids. The human embryonic kidney (HEK) 293T cells were transfected with Lipofectamine 2000. The medium was changed 8 h after dyeing and after 48 h of culture, the supernatant of the cell containing the lentivirus particles was collected and concentrated to obtain a high titer of the lentivirus concentrate. After the virus titer was measured and calibrated in HEK 293T cells, the infected cells were constructed and transferred. The MOLT-4 cell line and its control group were stained.

The total RNA of the transfected group and the control group was extracted and purified by TRIzol kit. The RNA sample was sent to Shanghai Kangcheng Biotechnology Co., Ltd. for RNA quality detection and human genome expression profiling. The chip was scanned with Axon GenePix. 4000 B), image and data processing was done using the American Axon GenePix Pro 6.0 software.

The data were analyzed by SPSS 21.0 software and the data were expressed as mean±standard deviation. Two independent samples were used for the measurement data between the groups. P<0.05 was considered statistically significant.

According to the chip data, differential genes with p<0.05, difference multiples >1.5 or <1:1.5 were screened for analysis. There were 1405 differentially expressed genes, of which 843 were up-regulated and 562 were down-regulated. 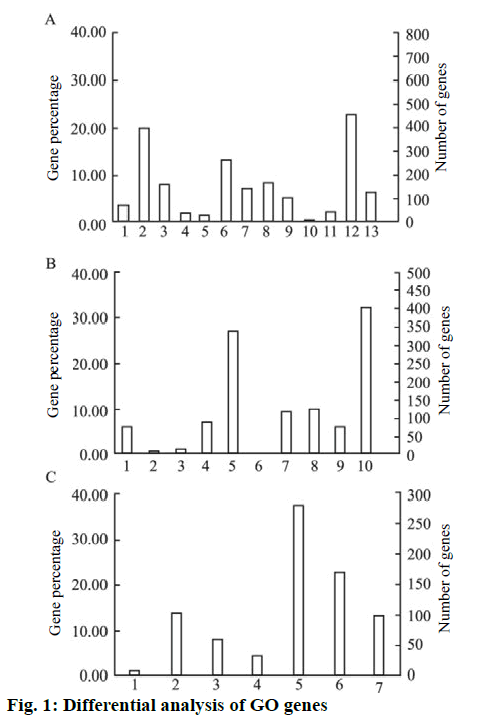 The 98 genes and TP63 in the KEGG pathway analysis results were uploaded to the STRING online tool to analyze the interaction between the proteins encoded by the above genes. The protein interactions were mainly concentrated in JUN, IL6, IL11, B2M, ITGAM, VEGFA. Between CD74 and BMP7, the literature revealed that most of the genes involved in immunerelated mechanisms, and the proteins that interact directly with the protein encoded by tp63 are CD74 and BMP7.

The nuclear transcription factor p63 is an important member of the p53 family and plays a key role in epithelial cell proliferation, differentiation, and tissue growth and development. In MOLT-4 cells, p63 mainly expresses Smo siRNA subtypes and is concentrated in basal cells. In the middle, the parabasal cells also expressed a small amount; with the epithelial differentiation and stratification, the expression of Smo siRNA gradually decreased until disappeared. Previous studies reported from the authors showed that the expression level of Smo siRNA in the MOLT-4 cells was correlated with epithelial-mesenchymal transition (EMT). The expression level of Smo siRNA was also different in MOLT-4 cell line. Among them, Smo siRNA was highly expressed in ME-180 cells and it was in MOLT-4 cells low expression. Therefore, in this study, Smo siRNA was overexpressed in MOLT-4 cells and its expression profile was detected by gene chip. A total of 1405 genes with differential folds >1.5 and p<0.05 were screened (843 up-regulated 562 downregulated). GO clustering analysis of the above genes showed that it mainly involved in cell growth and cycle, signal transduction, cell transfer and invasion. Further analysis of KEGG pathway showed that the differential genes were mainly involved in the immune responserelated signaling pathway. The correlation between the proteins encoded by the 98 genes in the KEGG pathway analysis results showed that the genes encoding the genes directly related to Smo siRNA were BMP7 and CD74, and qRT-PCR was performed, the results are consistent with the chip results.

BMP7 is a member of the transforming growth factorbeta superfamily and is prominently expressed in a variety of epithelial tumors. This study showed that MOLT-4 cells can down-regulate BMP7 expression after Smo siRNA treatment and the EMT process and invasion and metastasis ability of the cells are inhibited. Moreover, in the previous miRNA expression profile data, Smo siRNA treatment directly caused upregulation of miR-22 expression in BMP7 was regulated (fold change=2.32, p<0.05) [4,9]. Therefore, whether miR-22/BMP7 mediates Smo siRNA regulation of MOLT-4 cell EMT is worthy of further study.

In this study, gene chip was used to detect the difference of gene expression profile of MOLT-4 cells treated by Smo siRNA and screened CD74 and BMP7 as candidate genes for Smo siRNA. It is concluded that these two genes may be combined with Smo siRNA. Inducing immune function-related signaling pathways in MOLT- 4 cells, which affects tumor development. Therefore, the next step would be to detect the expression of Smo siRNA, CD74 and BMP7 in the transfected and control cells at the protein level. Overexpression or silencing of CD74 and BMP7 in two cells, comparing changes in Smo siRNA and other immune-related factors, and performing functional experiments such as cell proliferation, invasion and apoptosis, and exploring the role of CD74 and BMP7 in cell function of MOLT-4 cells. The above studies would provide important ideas and clues for further exploration of the mechanism of action of Smo siRNA in MOLT-4 cells.