Nanotechnology, a field of science and technology at molecular level controls and exploits the structure of matter on a large scale below 100 nanometers[1]. It is based on its ability of controlling metals into their nano size, which eventually change the physical, chemical and optical properties of metals. This is simply because of the nanoparticles (NPs) greater surface area per weight than larger particles, which make them more reactive as compare to other molecules[2]. On the base of size, distribution and morphology, NPs have new or improved properties. Green synthesis of metal NPs is devoid of consuming high energy, pressure and temperature. It is a useful and eco-friendly method to synthesize NPs on a large scale that attracted researchers throughout the world to find out the potential of different herbs. On the other hand, the chemical synthesis of NPs might result in poisonous chemicals adsorbed on their surface which might have unfavorable effects in medical applications[3].

Gold NPs (Au-NPs) have found use in diagnostic and drug delivery areas[4]. Au-NPs are synthesized from leaves, bark, stem, roots of herbal plants[5]. Au-NPs, also called gold colloids, have attracted attention for the fabrication of smart sensing due to their exclusive properties in devices in biomedical sciences as diagnostic tools in multi-disciplinary research fields[6]. In recent years in vitro approaches have been developed using plant extracts to bio reduce metal ions to synthesize NPs. Digera muricata species belongs to family Amaranthaceae. It is also known as Digera arvensis, Digera alternifolia and false amaranth or Digera angustifolia. All these are the synonyms of D. muricata. It is herbaceous plant grown annually (fig. 1). The whole plant especially its leaves and stems are useful due to their curative effects. It used for the inflammation, urination, as refrigerant and in sexual anomaly[7,8]. D. muricata is used in kidney disorder in folk medicine. The whole plant is used for digestive system as well as in urinary disorders. The extract of this plant was used in biliousness[9]. A decoction of leaves is given once in a day as kidney stone treatment[10]. Leaf paste is used in prevention of pus formation. The crushed plant is used as a mild astringent in bowel complaints[11]. The whole plant extract is also used to improve blood content[12]. D. muricata has flavonoids and been used as an anticancer drug[13]. Keeping in view of the above literature, the aim of current work is the biosynthesis of Au-NPs and evaluation of antibacterial activity against various drug-resistant bacterial strains. For the synthesis of Au-NPs and antibacterial assay, auric chloride (AuHCl4) was purchased from (E. Merck, Darmstadt, Germany), D. muricata extract, ethanol, nanopure water are used throughout the experiment. Bacterial strains used were Enterobacter, Vibrio cholera, Klebsiella pneumonia, Streptococcus pyrogen and Citrobactor. The plant was collected from the local fields of District Charsadda, Pakistan. After collection the plant material was washed 3 times using distilled water to remove all sand and dust particles. The plant was the cut into pieces and shade dried for 10-15 d. The dried plant was powdered in a mechanical grinder to a fine powder. Extract was prepared by soaking 500 g of powdered plant in 1500 ml of ethanol with shaking on an electric shaker at room temperature for 24 h. The extract was filtered through a Whatman filter paper No. 1 and the filtrate was stored in the refrigerator at 4º for further studies. 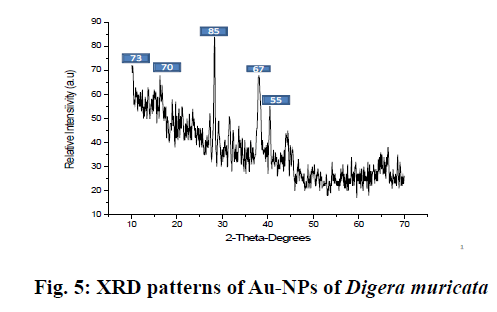 Diameter of zone of inhibition in mm

Authors declared that there is no conflict of interest.