In recent years, the convergence of metallic nanoparticles and biological techniques has created a new field of nanomedicine [1]. Metallic nanoparticles are of great interest due to their excellent chemical, physical, medicinal and catalytic properties. Among the metallic nanoparticles, copper nanoparticles (CuNPs) have continued to gain public interest due to their optical, electrical and thermal properties [2]. Synthesis of CuNPs is cost effective when compared to silver (Ag), gold (Au) and platinum (Pt) [3]. It is evident from the literature that, synthesis of stable CuNPs is the challenging task and various methods have been developed to synthesize CuNPs including physical, chemical and biological processes [4]. Copper and CuNPs have been synthesized by a variety of plant extracts [5]. Plant extracts from magnolia leaf, Syzygium aromaticum, Euphorbia nivulia, Sterculia urens and latex of Euphorbiaceae were reported to have biomolecules, which reduce Cu ions to CuNPs [5-7]. These nanoparticles synthesized with plant extracts were found to exert biological activities like antibacterial, antioxidant and anticancer [5,8-10]. Green tea (Camellia sinensis) contains many phytoconstituents like epigallocatechin-3-gallate (EGCG), theanins, catechins and polyphenols. It is reported to have neuroprotective activity [11,12], inhibit tumor cell proliferation, destructive action on leukemia [13], breast cancer cells [14,15] and prevent proliferation of ovarian, cervical, prostate, head, neck and pancreatic carcinoma cells [16]. EGCG has been reported to inhibit catechol- O-methyltransferase (COMT), 5α-reductase and aromatase in vitro [17-19]. Green tea is also found to have goitrogenic or antithyroid activity [15].

As the prevalence and increase of microbial resistance to multiple antibiotics is the area where health care system has been paying more attention, many researchers have been developing and emerging new technologies and effective antibacterial agents led to the use of Ag or copper based antiseptics that may be linked to the broad spectrum of activity and less susceptibility of developing bacterial resistance than antibiotics alone. The objective of the present investigation was to synthesize CuNPs using green tea extract (GTE) and to evaluate the synergistic activity, if any, in combination with antibiotics against Grampositive and Gram-negative bacterial strains as this has not been reported in literature to the best of our knowledge.

Collection and preparation of GTE

The medicinal plant C. sinensis (green tea) leaves (0357) were collected from Ooty, Tamilnadu. The leaves were shade dried until all the moisture evaporated and dried leaves were grounded to get coarse powder. Leaves powder was transferred into air tight container with proper labelling for further use. Plant material (100 g) was subjected to Soxhlet extraction using petroleum ether and chloroform (1:1) in order to get defatted material. The resultant defatted plant residue after drying was further extracted using 96% ethanol to get GTE [20]. GTE was evaporated to dryness using Rotovac (Heidolph) to get dried extract.

Copper sulphate pentahydrate (CuSO4.5H2O) aqueous solution (1 mM) was prepared and 170 ml of this solution was added to 30 ml (1%) of GTE. The reaction mixture was kept on magnetic stirrer at 95° and time taken to change the colour of the solution from dark green to sea green was noted down.

As CuNPs are most prone to oxidation, author attempted to synthesize them using GTE and β-CD to maintain stability. Typically 30 ml (1%) of GTE was added to 170 ml of 1 mM aqueous solution of CuSO4.5H2O for the reduction of copper ions. An aqueous solution of β-CD was prepared such that its concentration was about fifteen times higher than copper sulphate solution. The reaction was carried out using thermostatically controlled magnetic stirrer at 95°. The change in colour of the solution was noted from dark green to sea green indicated the reduction of CuNPs. The CuNPs obtained in above two steps were purified by repeated centrifugation (REM CM-12 Cooling centrifuge) at 1500 rpm for 20 min followed by redispersion of the pellet in deionized water [21].

Synthesized CuNPs were characterized by using UV/Vis spectroscopy (Shimadzu 1800), Fourier Transform Infrared Spectroscopy (FTIR, Bruker), Scanning Electron Microscopy (SEM, Zeiss) and X-Ray Diffraction (X-RD, X’pert Plus). Solutions were preserved in a refrigerator for the period of one month and subjected to SEM analysis to check the stability of nanoparticles.

Screening of CuNPs for antibacterial activity

Agar well diffusion method was employed for the screening of antibacterial activity [22]. Nutrient broth was taken in four boiling tubes and cultures of all four bacterial strains (labelled) were transferred to sterilized petriplates previously labelled with the names of the organism. Once the plates were ready, 6 mm wells were made using sterile borer. Ten microlitres of sample 1 solution was introduced into each well and well filled with deionized water was used as control. Similar procedure was followed for screening the activity of sample 2. All the plates were left to diffuse the sample and kept in an incubator at 37° for 24 h. The assays were performed in triplicate and mean inhibition zone diameters were measured. Minimum inhibitory concentrations were determined using tube dilution method [23].

Synergistic activity of CuNPs with antibiotics

Well diffusion method was employed in similar fashion as mentioned above to screen the synergistic effect of CuNPs with antibiotics. Ampicillin, amoxicillin, gentamicin and ciprofloxacin (HiMedia) are the antibiotics used in this study. Each well of petriplate labelled with specific bacterial strain was filled with standard antibiotic solution (10 μg/well) and CuNPs solution (10 μl/well). In a similar way synergistic activity was screened for sample 2. All the plates were left to diffuse the sample and kept in an incubator at 37° for 24 h. The assays were performed in triplicate and mean inhibition zone diameters were measured.

A well designed study on the green synthesis of CuNPs using GTE with and without β-CD, and the synergistic antibacterial activity of CuNPs with antibiotics were reported from this present work. It is well known that CuNPs exhibit a sea green colour in aqueous solution due to excitation of surface plasmon vibrations [24]. Reduction of copper ions to CuNPs could be followed by a colour change from dark green to sea green and which was noted by visual inspection. The UV/Vis spectrum of CuNPs showed a surface plasmon absorption band with maximum absorbance at 659 nm (Figure 1) indicating the presence of stable and well dispersed CuNPs. Surface plasmon resonances are clearly featured in the optical spectra and were located in visible region. Since the intensity of the plasmon resonance band depends on particle size, shape, metallic material and its surrounding environment, the number of particles cannot be related linearly to the absorbance intensities. The sea green colour suspension remains stable after one month of synthesis. This was further confirmed by SEM. Mono dispersed CuNPs, which are around 67-99 nm diameter were observed in the SEM images (Figure 2A and B). SEM result was further supported by XRD (Figure 3A and B). FTIR spectrum of CuNPs without β-CD shows bands at 3700, 2345, 1631, 1641, 1370, 1170 cm-1 (Figure 4A) and with β-CD exclusive bands at 2926, 2864, 1627 cm-1 confirmed the presence of capping agents around CuNPs (Figure 4B). Two peaks with wave numbers 2948 and 1642 cm-1 of β-CD (Figure 4C) are also present in the final solution of CuNPs. 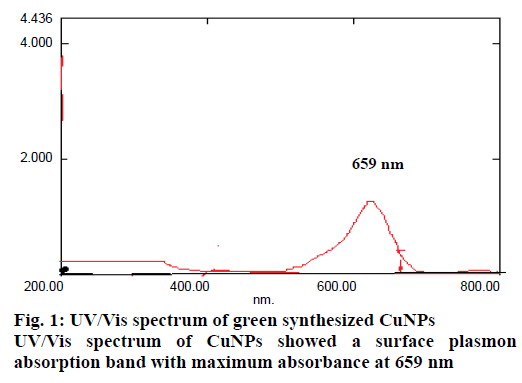 Figure 2: SEM of green synthesized CuNPs
Mono dispersed CuNPs which are around 67-99 nm diameter were observed

Figure 3: X-RD smooth pattern of CuNPs biosynthesized by green tea extract
(A) Without β-cyclodextrin and (B) with β-cyclodextrin CuNPs have shown a significant antibacterial activity against both Gram +ve and Gram –ve bacterial strains. Inhibition zone diameters observed were higher than those reported in previous studies [25]. Out of four strains of bacteria used in this study; S. mutans has shown good susceptibility to CuNPs. Moreover CuNPs capped with β-CD showed a clear increase in zone of inhibition except in case of S. mutans and these results are in contrary to the research reported by Yang in 2010 [26]. The main components of green tea, which may contribute to reduce copper to nanosize and enhance antibacterial activity of CuNPs are polyphenols, which include catechins, epicatechins, epigallocatechins, epicatechingallate, epigallocatechingalate, gallic acid, flavanols, flavanoids. Other than polyphenols caffeine and theophylline are also present. Among which compounds of catechins family has been widely reported to have most beneficial effects on the health [26,27].

Zone of inhibition was measured in mm. Values are expressed as Mean±SD, where n=3

Table 1: Zone of Inhibition of CuNPs

The antibacterial activity of the combination of green synthesized CuNPs with different antibiotics was studied against Gram +ve and Gram –ve bacteria using agar well diffusion method. The mean inhibition zone diameters of antibiotics with and without CuNPs were shown in Table 2. The antibacterial activity of ampicillin, amoxicillin and ciprofloxacin was increased in the presence of CuNPs and further increased in the presence of CuNPs+β-CD against E. coli, S. typhi (Gram –ve) and M. luteus (Gram +ve). In case of gentamicin, negative fold increase is observed in presence of CuNPs against Gram +ve organism. The highest fold increase was observed for ampicillin with β-CD capped CuNPs. This may be attributed to a biodegradable capping agent and phytoconstituent of GTE. As CuNPs prepared from other routes are highly unstable due to their susceptibility to oxidation, authors attempt to synthesize CuNPs using GTE and the purpose of adding β-CD to the synthesis were successful.

Zone of inhibition was measured in mm. *Percent fold increases of individual antibiotics were calculated using the formula ((b−a)/a×100

Table 2: Mean Zone of Inhibition of Different Antibiotics with and without CuNPs against Gram+Ve and Gram–Ve Bacteria*

It is proposed that close contact between CuNPs and microorganism may enhance the transfer of CuNPs to the bacterial cell. Bacterial degradation of capping and stabilizing agent promotes the release of CuNPs. The reaction between antibiotic and CuNPs led to synergism. The antibiotic molecule contain active groups like hydroxyl and amido, which react easily with metallic copper at nanosize by chelation [28]. These results were supported by previous reports in which possible interaction of nanoparticles with cell walls of bacteria was studied [29].

Green synthesis of CuNPs using GTE facilitates economical, eco-friendly and simple process of synthesizing CuNPs. β-CD was found to be an effective stabilizing and capping agent as it was observed that green CuNPs with β-CD has shown no change in morphology of the metallic particles after one month of synthesis and has enhanced antibacterial activity alone and in combination with antibiotics. Here we proposed a possible mechanism for the enhancement of the antibacterial activity of antibiotics with CuNPs. This study helps in further research in the area of combating bacterial resistance towards antibiotics using metallic nanoparticles.