The hepatoprotective and antioxidant activities of ethanol extract of Desmodium triquetrum DC leaf were investigated against carbon tetrachloride (1 ml/kg i.p) induced hepatic damage in rats at a dose of 200 mg/kg body weight p.o. The test extract significantly (P<0.05) reduced the elevated levels of serum transaminases, alkaline phosphatase, bilirubin and reversed the antioxidant enzyme and non-enzyme levels. It dose dependently inhibited thiobarbuturic acid induced lipid peroxidation in vitro (IC50=59.9 μg/ml). Histopathological studies provided supportive evidence for biochemical analysis. Silymarin (25 mg/kg) is a known hepatoprotective drug used as a reference drug. The results indicated that D. triquetrum has potent hepatoprotective and antioxidant activity that may be due to the presence of flavonoids in the plant.

Liver diseases remain one of the serious health problems. They are mainly caused by toxic chemicals, excess consumption of alcohol, infections and autoimmune disorders. Most of the hepatotoxic chemicals damage liver cells by inducing lipid peroxidation and oxidative stress. These liver disorders remained unresolved because the therapies developed along the principles of modern system of medicine are often limited in efficacy, carry the risk of adverse effects and are very expensive, especially for the developing world. Therefore, the treatment of liver diseases with herbal medicines seems highly attractive and also is quite an old approach of various traditional systems of medicine [1].

Desmodium triquetrum DC (Leguminosae, Subfamily- Papilionaceae) is an erect or suberect undershrub, distributed throughout central and eastern Himalayas, South India and Sri Lanka. The leaves are used as a substitute for tea by hill tribes in upper Assam. The leaf extracts or pills are used for the treatment of piles [2]. The chloroform and alcohol extracts of D. triquetrum were reported for their antibacterial activity [3]. The ethanol extract of leaves of this plant has been reported for its wound healing activity. Preliminary phytochemical investigations on the D. triquetrum revealed the presence of flavonoids, glycosides, steroids, saponins, phenolic compounds, amino acids and fixed oils [4]. It was also reported that the whole plant is boiled and used against the treatment of liver parasite by Lao people [5]. Although the leaves were used traditionally for varied ailments, no scientific study has been reported. Hence a systematic study has been undertaken to evaluate the hepatoprotective and antioxidant activities of ethanol extract of leaves of D. triquetrum against carbon tetrachloride induced hepatotoxicity in rats.

Healthy adult Wistar albino rats of either sex, weighing about 150 to 200 g were used for the study. They were allowed free access to standard chow diet and water ad libitum. The experimental procedures described were reviewed and approved by the Institutional Animal Ethics Committee. All chemicals and reagents used were of the analytical grade.

Acute toxicity studies were carried out as per OECD guidelines 423 (OECD, 2000). Healthy female albino rats were starved overnight and administered orally with DTE. The animals were observed for mortality and behavioural responses for 72 h. The DTE was found to be safe up to 2000 mg/kg b.w. Hence 1/10th of the dose i.e. 200 mg/kg b.w. was selected for this study.

Animals were divided into four groups of six animals each. Group I (Normal rats) received vehicle (olive oil). Group II - IV received CCl4 (30% in olive oil, 1 ml/kg; i.p.) at an interval of 72 h. Group III and IV received 200 mg/kg/day of DTE and 25 mg/kg/day of silymarin, standard drug respectively for 10 days. On 11th day the blood was collected from all animals by puncturing retro-orbital plexus. The blood samples were allowed to clot for 30 min at room temperature. Serum was separated by centrifugation at 2000 rpm for 10 min and used for biochemical estimations. Liver was dissected out and used for histopathological study and for the assay of antioxidant enzymes. The assay of serum glutamate oxaloacetate transaminase (SGOT), serum glutamate pyruvate transaminase (SGPT) [6], serum alkaline phosphatase (SALP) [7] and serum bilirubin [8] were carried out to assess the hepatic damage induced by CCl4.

The liver was perfused with ice-cold normal saline to remove the blood. A 5% w/v of liver homogenates were prepared in 0.25M sucrose in 0.1M Tris buffer at pH 7.2 and centrifuged. The supernatant thus obtained was used for the estimation of superoxide dismutase (SOD) [9], catalase (CAT) [10] and nonenzymereduced glutathione (GSH) [11].

Randomly selected rats fasted overnight were sacrificed by cervical dislocation and the liver was perfused with ice-cold phosphate buffer of pH 7.4. The blood free liver was taken out and homogenized in a glass Teflon homogenizer (10% w/v). The effect of DTE on thiobarbituric acid (TBA) induced lipid peroxidation was studied [12] with 25, 50, 100, 200 and 300 μg/ml concentrations of DTE. The results were expressed as mean±SEM All statistical analysis were made using ANOVA followed by Dunnett’s ‘t’ test. P<0.05 was considered significant.

CCl4 is biotransformed by the Cytochrome P-450 in the liver endoplasmic reticulum to the highly reactive trichloromethyl free radical (CCl3). This in turn reacts with molecular oxygen to form a trichloromethyl peroxy radical, which may attack lipids on the membrane of endoplasmic reticulum and causes lipid peroxidation. Lipid peroxidation initiates a series of reactions namely disruption of Ca+2 homeostasis, elevation of hepatic enzymes, depletion of GSH and finally leading to liver necrosis thereby playing a significant role in pathogenesis of diseases [13,14].

Elevated levels of serum transaminase reflect the loss of structural and functional integrity of cell membrane in liver. When the cell membrane of the hepatocytes is damaged, a variety of enzymes from cytosol are released into the blood and their estimation in the serum is an index for the measurement of severity of liver damage [15]. SALP and bilirubin levels on the other hand are related to the function of hepatic cell. Increase in SALP is due to excess biliary pressure [16]. The DTE prevented the CCl4 effect thereby restored the levels of ALP and bilirubin that indicated an early improvement in the secretory mechanism of the hepatic cells.

Histological observations supported the biochemical changes caused by CCl4 toxicity. The liver cells of CCl4 intoxicated group showed centrilobular necrosis, dilatation of central vein and inflammatory cells with massive fatty chain. The DTE treated group showed an almost normal architecture of the liver having regeneration/repair of hepatocytes and normalization of fatty changes as compared to normal and silymarin treated groups (figs. 1a to d). To elucidate the hepatoprotective mechanism of DTE, the effect of DTE on SOD, CAT, GSH were measured (Table 1). The free radical formation in lipid peroxidation is measured at thiobarbituric acid reactive substance (TBARS) in rat liver homogenate. Fig. 2 shows the inhibition of TBARS formed in the presence of DTE in concentration dependent manner. 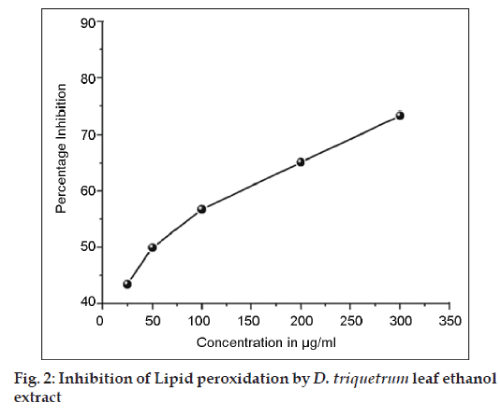 The concentrations of SOD, CAT and GSH were significantly reduced in CCl4 treated group, whereas their levels were restored in DTE and silymarin treated animals and were comparable with the normal control group (Table 1). The SOD, CAT and GSH form an effective defence mechanism of the body to protect it against the damaging effects of activated reactive oxygen species [17]. While CCl4 undergoes biotransformation in the liver, reactive free radicals and oxidants are generated [13]. Reaction of reactive species with cellular antioxidants causes depletion of antioxidant enzymes that may result in oxidative stress [18,19]. The administration of DTE significantly preserved SOD and catalase activities thus exhibiting hepatoprotective activity due to inactivation of reactive oxygen species. GSH protects the cells by scavenging of free radicals. The DTE is reported to contain flavonoids, phenolic compounds and glycosides [4], which may be responsible for the hepatoprotective and antioxidant activities of the plant [20].

Thus, the ethanol extract of Desmodium triquetrum leaf has potent hepatoprotective and antioxidant activities against CCl4-induced liver toxicity. Further phytochemical and pharmacological investigations are underway to identify the active constituents responsible for hepatoprotection.