In current liquid-liquid separation systems, waterimmiscible volatile organic solvents are widely used with their good extraction performance. But in the perspective of environmental issues of these hazardous solvents, there is a growing interest in finding greener replacements for liquid-liquid separation in industry and academic research. In recent years, aqueous biphasic systems (ABSs) aiming at avoiding the use of organic solvents as extractive phases have developed and been shown to be effective for separating organics [1,2], metals [3], carbon nanotubes [4,5], and biological compounds [6,7]. ABSs are composed of two aqueous-rich phases formed by polymer/polymer, polymer/salt, or salt/salt combinations. The basis of separation in ABSs is a direct result of the equilibration and selective distribution of target (bio) molecules between the two distinct aqueous phases.

Lately, ionic liquids (ILs, by definition salts which have melting points less than 100°) emerged as promising and alternative green replacements for ordinary organic solvents [8,9], due to their chemical and thermal stabilities, negligible volatility, general non-flammability, and great dissolving ability for a wide variety of compounds [10,11]. Since 2003, Gutowski et al. [12] found imidazolium-based ILs can also form ABSs with inorganic salt of K3PO4. ABSs-based on ILs have received great attention in the field of liquid-liquid separations with their novel extractive ability and the feature of being environment friendly [13,14]. However, the synthesis of ILs is complex and expensive, which limit the large-scale industrial applications and development of ILs. As a new class of ILs or ILs analogue, deep eutectic solvents (DES) have similar physical properties and phase behavior [15] to traditional ILs [16,17]. DES can be synthesized easily using a certain molar ratio of two or three non-expensive components, which are capable of self-association through hydrogen bond interactions [18,19]. Also, the excellent sustainable and biodegradable properties of DES highlight their advantages as promising non-toxic green solvents [15,20]. DES have shown excellent performance in adsorption [21,22], organics extraction [23,24] and bioactive compounds separation [25,26]. So, as a candidate ILs, DES are promising green solvent to form ABSs with potential great value in the field of extraction and separation.

Amino acids are building blocks of proteins and can be employed as elements or intermediates in antibodies, chelating agents and polypeptides [27-30]. These wide applications make amino acids play a vital role in daily routines and manufacture [31]. Separation and puriﬁcation of amino acids are important and have crucial research value in human life. Traditional methods such as solid-liquid adsorption [32-34], extraction with organic solvents [35-37], ion-exchange [38], centrifugation [39,40] and chromatography [39,41] are expensive and time consuming, and are not easily scalable [42]. Moreover, the operational environment is not mild in many cases, which may result in amino acid inactivation. So finding new methods for easy and low-cost extraction of amino acids along with bioactivity retention has become an instant issue for biotechnology. The use of environment friendly and economical DES-based ABSs would be a good strategy.

In this paper, choline chloride (ChCl)/polyethylene glycol-based DES was synthesized and characterized. A series of ABSs composed of the synthesized DES and salt (Na3C6H5O7, Na2CO3, NaH2PO4, or K2HPO4) solutions were established and applied for the extraction of tryptophan for the ﬁrst time. Some of the significant factors effecting the extraction, such as the species and amount of salts, the concentration of tryptophan, the dosage of DES, and the temperature were optimized. The chemical nature of tryptophan before and after extraction was investigated using UV/Vis and fluorescence spectrometer.

All reagents used were of analytical grade (AR) and purchased from Sinopharm Chemical Reagent Co., Ltd., Shanghai, China without further purification but polyethylene glycol 2000 (PEG, chemically pure) was dried under vacuum before use. Double-distilled water was used throughout the experiments. L-tryptophan with a purity >99.0 % w/w was employed to investigate the extraction capacity.

Synthesis and characterization of DES:

DES was synthesized by stirring two eutectic mixture at 110° till a homogeneous, colorless liquid was formed. The investigated DES was based on ChCl and PEG with a certain mass ratio (PEG = 50, 60, 70, 80, 90, 100 %) according the process reported by Li et al. [43]. The structure of the synthetic DES was confirmed using elemental analyses, thermogravimetric analysis (TGA) and Fourier-transform infrared spectroscopy (FT-IR).

Elemental analysis was carried out on an Element analyzer (Flash1112A) by weighting 2.3 mg samples in a tinfoil. TGA was done on STA-449C Jupiter (Netzsch Corporation, Germany). The sample was tested from room temperature to 800° with a heating rate of 10°/min under air atmosphere with airflow of 60 l/min. FT-IR spectra of samples were measured on a Nicolet Avatar-370 spectrometer at room temperature using the standard KBr disk method.

The phase diagrams were recorded by turbidimetric method under room temperature [44]. DES solution (1.5 ml, 50 %, w/w) was added into a 10 ml centrifuge tube. Saturated solution of Na3C6H5O7 (or other salts) was added dropwise and shaken until the appearance of a cloudy solution. This was followed by dropwise addition of water to make the mixture clear again. The above process was repeated to obtain sufficient data to construct a liquid-liquid equilibrium phase diagram.

A certain amount of DES, salt (Na3C6H5O7, Na2CO3, NaH2PO4, or K2HPO4) and tryptophan solution were added into graduated tubes, respectively. Afterwards, the biphasic solutions were left to equilibrate for 30 min (a time period established by shaking vigorously) to achieve a complete tryptophan partitioning between the two phases. The concentration of amino acid, in both phases, was determined on a UV/Vis spectrophotometer at a wavelength of 278 nm. A calibration curve obtained in the range of 0-0.1 g/l was A = 25.52 C+0.027 (R2=0.9993), where C (g/l) is the concentration of amino acid and A is the UV absorbance. Partitioning of tryptophan between the two phases were characterized by the partition coefficient (K), phase volume ratio (R), and extraction efficiency (E %), which can be calculated by the following Eqns. 1, 2 and 3, K = Ct/Cb; R = Vt/Vb; E % = CtVt/(CtVt+CbVb)×100, where Ct and Cb (g/l) are the concentrations of tryptophan in the DES-rich top phase and salt-rich bottom phase, respectively. Vt and Vb (ml) stand for the volume of the top and bottom phase, respectively.

A series of DESs were synthesized with different mass ratios of ChCl and PEG, and the melting points were detected using a meldometer (figure 1). DES had a minimum melting point at 60 % of PEG mass fraction (ChCl:PEG = 2:3, w/w), and this DES with the mass ratio of 2:3 (ChCl:PEG) was chosen for the later investigation [45]. Elemental analysis of the prepared DES is listed in Table 1. The analysis value was approximated with the calculated value. It indicated that there was no mass defect in the process of the reaction. 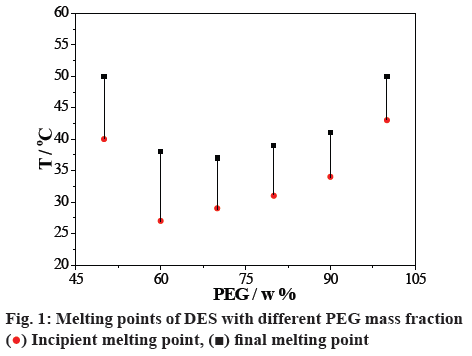 The TGA, DSC and DTG curves for DES, PEG and ChCl are shown in figure 2. The decomposition of PEG and ChCl were 259.7 and 316.7°, respectively. After DES is formed, the weight loss was divided into two steps, which were just assigned to its two reactants. According to the DSC curves of DES, the first step was an endothermic process attributed to the thermolysis of PEG, while the second step was an exothermic process attributed to the thermolysis of ChCl.

FT-IR spectra of the ChCl, PEG and DES are shown in figure 3. The bands between 3000 and 2700 cm-1 corresponded to the stretching vibration of C-H in ChCl and DES. Compared with ChCl, the redshift of the peak of C–O (from 960 to 950 cm-1) in DES was clearly seen, indicated that large amount of the stable hydrogen bonds were formed [24]. The main characteristic peaks of ChCl and PEG could be observed in the FTIR spectrum of DES, which identified that functional groups of reactant were stable when the reaction was processing. 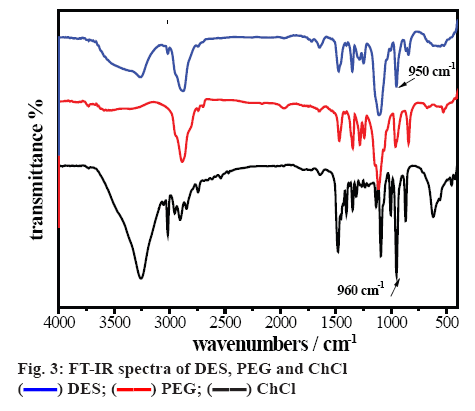 Liquid-liquid equilibrium data were significant for the design of aqueous biphasic extraction process. In this study, the equilibrium compositions of the ABSs, DES (1)+salt (Na3C6H5O7, Na2CO3, NaH2PO4, or K2HPO4) (2)+H2O (3), determined at 298 K are shown in figure 4. These binodal curves can provide the information about the concentration fractions of DES and salt required to form an ABS. The region above the curve represented the biphasic system, while the system was a homogeneous phase below the curve. In addition, larger biphasic region indicated stronger ability for the salts to undergo ABS [46]. It can be seen from figure 4 that the phase-forming ability of salts followed the order: Na2CO3>Na3C6H5O7>K2HPO4>NaH2PO4. 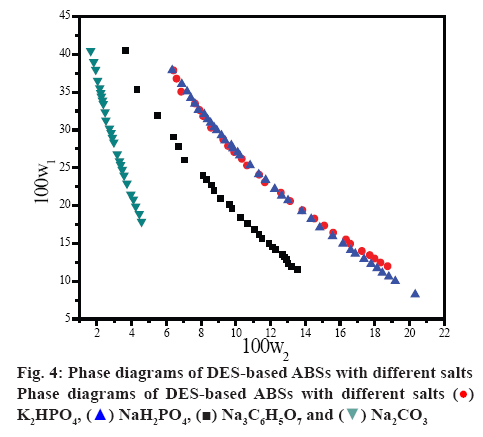 ) Na2CO3 on the extraction efficiency of tryptophan

The amount of DES was a significant factor that influences the extraction of tryptophan for ABSs and the result is shown in Table 2. With the increase of DES, the extraction efficiency of tryptophan in DES-based ABSs with Na2CO3, NaH2PO4, K2HPO4 and Na3C6H5O7 firstly continually increased, then reached the maximum values, and then decreased except DES-Na3C6H5O7 system. When the DES amount was more than 1.3 g (0.46 g/ml), there was not enough water to dissolve the DES, and the bi-phase system can’t be formed. This result indicated that DES could promote the extraction of tryptophan at a suitable range, and the optimum amount of DES is 0.28, 0.46, 0.40 and 0.40 g/ml for the four ABSs of DES-Na2CO3, DES-Na3C6H5O7, DES-NaH2PO4 and DES-K2HPO4, respectively.

Table 2: Effect of Des Amount on the Extraction Efficiency of Tryptophan

The effect of the addition of salts on the miscibility of a given system is very complex. As the salts dissolve in solvent, the ions are surrounded by a layer of water molecules. In the ABS, different compositions possesses diverse ions, and different types of intermolecular interactions exist in the system [48]. Then the extraction target is added in the disordered system increasing another rival to compete the quantificational water molecules. As shown in Table 3, with the increase of the dosage of salt, the extraction efficiency of tryptophan changed regularly and reached the maximum values of 85.86, 86.2, 88.41 and 91.55 % at their optimum dosage conditions for DES-based ABSs with Na2CO3, Na3C6H5O7, NaH2PO4 and K2HPO4, respectively. What needs to be mentioned is that the aqueous biophase can’t be formed when the salt amount is outside the extreme scope.

Table 3: Effect of Salt Mass on the Extraction Efficiency of Tryptophan

The extraction efficiencies of tryptophan in the four ABSs at temperatures ranging from 288-328 K were measured, and the results are shown in figure 5c. As the temperature increased from 288 to 328 K, the extraction efficiencies decreased to various extents. The DESNa2CO3 system was more sensitive than the other three ABSs, the decrement value could reach approximately 26 % while the Na3C6H5O7 and NaH2PO4 systems reach about 15 %, the K2HPO4 system reach about 8 %. The possible reason might be that the water solubility of Na2CO3 is low and sensitive to temperature, which cause more tryptophan distributed into the salt-rich phase with the temperature enhanced [49]. The increased temperature intensify the phenomenon of Brownian motion, and the molecules in the ABS are active to transfer between the two phase leading to homogeneous distribution [50]. ABS-1 composition was 0.40 g/ml DES+0.26 g/ml K2HPO4; ABS-2 was 0.4 g/m l DES+0.10 g/ml NaH2PO4; ABS-3 was 0.46 g/ml DES+0.18 g/ml Na3C6H5O7 and ABS-4 was 0.28 g/ml DES+0.14 g/ml Na2CO3; Ctryptophan: 0.05 g/l; 288-328 K. 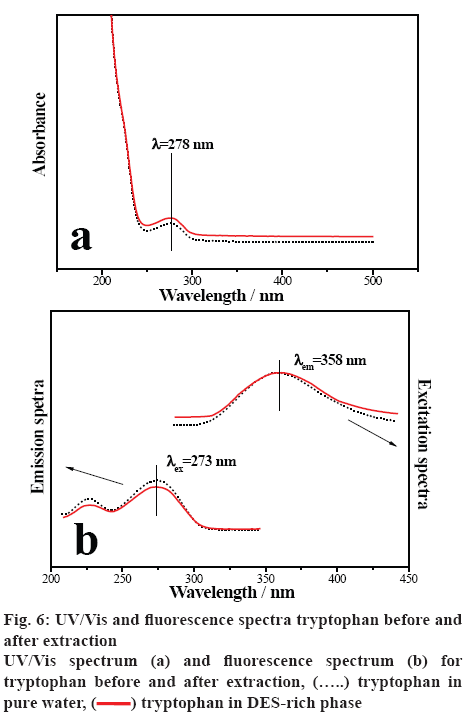 DES was successfully synthesized with proper mass ratios of ChCl and PEG, and DES-salt (Na3C6H5O7, Na2CO3, NaH2PO4, or K2HPO4) ABSs were established and applied for tryptophan extraction. DES-Na2CO3 ABS showed the strongest phase-forming ability. After the optimization of extraction conditions, the extraction efficiency of tryptophan can reach 93.88 % (DES-K2HPO4 ABS), 90.83 % (DES-NaH2PO4 ABS), 88.88 % (DES-Na3C6H5O7 ABS) and 86.72 % (DESNa2CO3 ABS), respectively, under the optimum conditions. Finally, UV/Vis and fluorescence spectra conﬁrmed the structure of tryptophan had no change after extraction. DES-based ABSs can provide a mild environment and have potential applications in the high efficient extraction and purification of biological substances.