HPTLC determination of artesunate as bulk drug and in pharmaceutical formulations

A new, simple, rapid, accurate and precise HPTLC method has been developed for the estimation of artesunate in bulk and pharmaceutical formulations. The study employs silica gel F 254 as stationary phase on aluminium foil and mobile phase comprising toluene: ethyl acetate: acetic acid (2:8:0.2). Vanillin (1%) in sulphuric acid (5%) in ethanolic solution gave prominent well-resolved pink colour spot for artesunate, which was stable for more than a day. The densitometric analysis was carried out in the absorbance mode at 520 nm and symmetrical, well-resolved, well-defined peaks were obtained. The Rf value for artesunate was found to be 0.44. The linear detector response for artesunate was observed between 100-600 ng per spot and the calibration plots showed good linear relationship with coefficient of regression, r= 0.9989 with respect to peak area. The method was validated for precision, recovery and robustness. The limits of detection and quantitation were 30 ng/spot and 90 ng/spot, respectively. The recovery study was carried out by standard addition method and the recovery was found to be 99.89±1.006. Recovery from tablets was 98.88 (±0.55) and from injection, it was 98.83 (±0.60) of the labeled amount.

Artemisinin and its derivatives are promising and potent antimalarial drugs, which meet the dual challenge, posted by drug resistant parasites and rapid progression of malarial illness [1,2]. It is a sesquiterpene with an unusual endoperoxide linkage structurally unrelated to other known antimalarials. The use of artemisinin as antimalarial agent is hampered by its poor solubility in oil and water and its poor efficacy on oral administration. Thus, new structural modifications in artemisinin were essential [3]. A watersoluble derivative of artemisinin, the sodium salt of artesunic acid (succinic acid half-ester derivative of dihydroartemisinin) can be administered by i.v. injection, a property that makes it especially useful in the treatment of advanced and potentially lethal cases of P. falciparum infection [4].

Literature survey reveals few analytical methods for estimation of artesunate in biological fluids and pharmaceutical formulations, which includes HPLC with electrochemical detection [5] and with ion pairing [6], reversed phase HPLC [7] and colorimetric method [8,9]. It was felt that a reliable and rapid method for the estimation of artesunate was needed. The primary goal was to develop and validate a HPTLC method for the rapid quantitation of the drug. This paper describes a simple, rapid, precise, specific alternative to existing HPLC methods for the determination of artesunate in bulk drug as well as in pharmaceutical dosage forms.

Artesunate bulk drug, tablets (50 mg) and injection (60 mg) were obtained as a gift sample from Skymax Laboratories Pvt. Ltd., Gujarat. Another samples of artesunate tablets (50 mg) and combination dosage form containing artesunate (100 mg), sulfadoxine (500 mg) and pyramethamine (25 mg) was from Medicamen Biotech Ltd. All other chemicals and reagents used were of AR/HPLC grade. The instrument used in the present study was Camag- HPTLC system (Switzerland) comprising Camag Linomat V automatic sample applicator, Camag TLC Scanner III with Wincats software. The samples were spotted in the form of bands of width 5 mm using a Camag microlitre syringe on precoated silica gel 60 F254 TLC precoated aluminium plates (E.Merck), 10 cm×10 cm size with 200 µm layer thickness using a Camag Linomat V applicator. A constant application rate of 150 nl/s was employed and space between two bands was 5.5 mm. The slit dimension was kept at 4 mm×0.1 mm and 20 mm/s scanning speed was employed. The mobile phase consisted of toluene: ethyl acetate: acetic acid (2:8:0.2). The chromatogram was developed in a Camag twin trough glass chamber using a linear ascending technique. The chamber saturation time for mobile phase was optimised to 30 min at room temperature. The length of chromatogram run was 80 mm. Densitometric scanning was performed on Camag TLC scanner III in the absorbance mode at 520 nm. The source of radiation utilized was deuterium or tungsten lamp.

A stock solution of artesunate (100 μg/ml) was prepared in methanol. Different volumes of stock solution were spotted in duplicate on TLC plate with the help of automatic sample applicator, to obtain amounts of 100, 200, 300, 400, 500 and 600 ng/spot of artesunate, respectively. The plates were developed in the presaturated twin trough chamber, dried and densitometrically scanned at 520 nm. The data of peak height/area versus drug concentration were treated by linear least-square regression analysis.

Repeatability of sample application and measurement of peak area were performed by the proposed method using six replicates of the same spot (500 ng/spot of the drug). The intra- and inter-day variation for the determination of artesunate was carried out at three different concentration levels of 200, 600 and 3000 ng/spot. This test was performed to justify the suitability of the proposed method.

By altering various experimental conditions like mobile phase composition, amount of mobile phase, plate treatment, time from spotting to chromatography and time from chromatography to scanning, the effects on the results were examined. This was carried out at three different concentration levels of 200, 600 and 3000 ng/spot, in triplicate.

In order to estimate the LOD and LOQ, blank methanol was spotted six times on HPTLC plate and then developed, sprayed and scanned in a similar way as that for calibration curve and then signal-noise ratio was determined. The detection limit (DL) may be expressed as, DL= 3.3 σ/S, where, σ is the standard deviation of the response and S is the slope of the calibration curve. The quantitation limit (QL) may be expressed as, QL= 10 σ /S.

Stock solution of marketed preparation having concentration of 500 μg/ml of artesunate was prepared.

This solution was first analyzed by the proposed method. In the analyzed sample, an extra 80%, 100%, 120% of standard drug was added and then mixture was analyzed. The experiment was conducted in triplicate. It was done to find out the recovery of drug at different levels in the formulation.

To determine the content of artesunate in tablets (labeled claim: 50 mg), twenty tablets of artesunate were accurately weighed and finely powdered. Powder equivalent to 50 mg of artesunate was weighed accurately and extracted with 30 ml of ethanol. Solution was sonicated for 30 min and volume was made upto 100 ml with ethanol. Resulting solution was filtered twice. Final concentration of 500 ng/μl was obtained and 1μl of the solution was spotted on the plate and developed, sprayed and scanned. The experiment was repeated six times.

The Rf value for artesunate was found to be 0.44 (fig.1). The linear regression data for the calibration curves (n=3) showed good linear relationship over the concentration range 100-600 ng per spot with respect to peak area with r= 0.9989. The developed HPTLC method was validated as per ICH guidelines. The precision of the method was evaluated by repeatability of sample application and measurement of peak area using six replicates of the same spot (500 ng/spot of the drug) with %RSD of 0.88. The intra- and interday variation for the determination of artesunate was carried out at three different concentration levels of 200, 600 and 3000 ng/spot with %RSD of 0.81 (Table 1). The robustness of the method was evaluated by altering the various experimental conditions. This was carried out at three different concentration levels of 200, 600 and 3000 ng/spot, in triplicate with %RSD value of 0.43 (Table 2). The limit of detection and limit of quantitation for artesunate was calculated to be 30 ng/spot and 90 ng/spot, respectively. The accuracy of the method was evaluated by percentage recovery (by standard addition) of the drug. The average recovery was found to be 99.89±1.006. The developed HPTLC method was also applied to the analysis of artesunate in their pharmaceutical dosage forms. The drug content and % RSD was found to be 98.88%, 0.55 for artesunate tablets and 98.83%, 0.60 for artesunate injection, respectively (Table 3). The values of SD or RSD and coefficient of correlation were within the prescribed limit of 2% showing high precision of the method. This indicated the suitability of the method for routine analysis of artesunate in commercially available marketed pharmaceutical dosage forms.

Table 1: Intra- and Inter-Day Precision of Hptlc Method for Artesunate.

Each value is result of three separate determinations.

Table 2: Robustness of the Method for Artesunate.

Each value is result of six separate determinations.

Table 3: Analysis of marketed formulations of artesunate by hptlc Method. 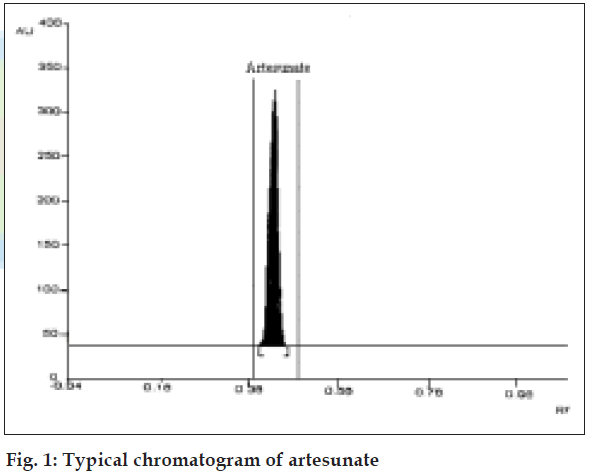 The authors are thankful to Professor S. Ahmad, Vice chancellor, Jamia Hamdard and to Skymax Laboratories Pvt. Ltd., Gujrat for providing samples of pure artesunate. S.P. Agarwal is grateful to All India Council for Technical Education for an Emeritus Fellowship. We are also thankful to (Ms.) Harrina Gonsalves for help in the preparation of manuscript.