HPTLC method for the determination of gatifloxacin in human plasma

A high performance thin layer chromatographic method for the determination of gatifloxacin in human plasma using paracetamol as internal standard is proposed. Gatifloxacin in plasma was extracted with dichloromethane at pH 4.5 (phosphate buffer). The dichloromethane layer was evaporated and residue was reconstituted with ethanol and quantified using the mobile phase consisting of chloroform:methanol:ethanol:ammonia (4:2:2:2% v/v/v/v). The limit of quantitation was 50 ng/spot. The % RSD of the intra-day and inter-day was less than 15. The method was found to be simple, sensitive, rapid and could be used in the pharmacokinetic study involving human volunteers.

Gatifloxacin (±1-cyclopropyl-6-fluoro-1,4-dihydro-8methoxy-7-{3-methyl-1-piperazinyl} 4-oxo-3-quinoline carboxylic acid) is an advanced general antibacterial agent [1,2], has broader spectrum of antibacterial activity than the other fluoroquinolones [3]. The different analytical methods reported for the estimation of gatifloxacin includes HPLC [4-7], LC/SI-MS/MS [8], spectrophotometry [9], and HPTLC [10]. Estimation from human plasma [11], serum and urine [12] were also reported. These methods are lacking from higher detection limit and time consuming. The present HPTLC method using paracetamol as internal standard is simple and cost effective for the determination of gatifloxacin in human plasma with ease and higher sensitivity.

An HPTLC system (Camag, Muttez, Switzerland) equipped with Linomat V semi automatic sample applicator, twin trough developing chamber and TLC scanner3 with WINCATS evaluation, ATS software (version 1.2.6) were used for the analysis, silica gel 60GF254 plates (10 × 10), layer thickness 0.2 mm, (E-Merck, Darmstadt, Germany) were used as stationary phase. A mobile phase consisting of chloroform:methanol:ethanol:ammonia (4:2:2:2% v/v/v/v) was used for development of chromatogram. The spot was scanned using 291 nm. A stock solution of 1 mg/ml of gatifloxacin and paracetamol were prepared separately in ethanol. Appropriate dilutions of gatifloxacin were made to produce working standard solutions in the range of 50 to 400 μg/ml. Paracetamol solution was diluted to get 250 μg/ml.

To 500 μl of plasma sample, 500 μl of working standards of gatifloxacin and paracetamol solution (250 μg/ml) were added and mixed. Phosphate buffer pH 4.5 (1000 μl) was added along with 5 ml of dichloromethane and the contents were vortexed for 1 min and centrifuged at 2000 rpm for 5 min at 35o. An aliquot of (1000 μl) of the supernatant was taken and evaporated to dryness with nitrogen gas. The residue was reconstituted with 1000 μl of ethanol. Aliquots of 10 μl each of standard extract was spotted on TLC plates.

The chromatogram of plasma spiked with gatifloxacin and paracetamol is shown in fig. 1. No endogenous interfering peaks were visible in blank plasma at the spot of gatifloxacin and the internal standard there by confirming the specificity of the analytical method. Both the analyte and the internal standard were well separated with Rf values of 0.70±0.03 and 0.90±0.02, respectively. 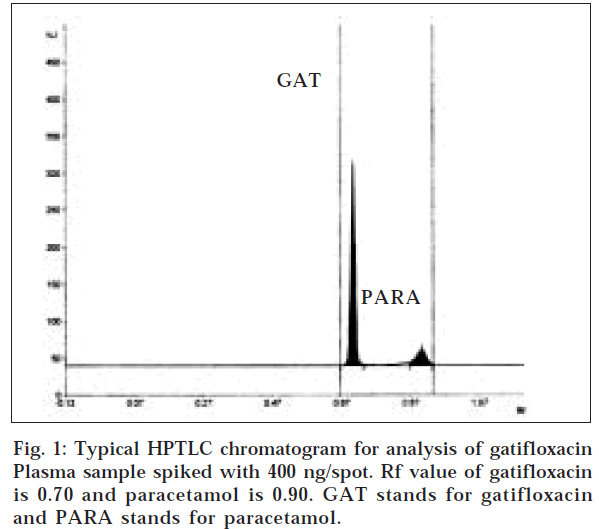 The resolution (Rs) between gatifloxacin and paracetamol was 3.3. The efficiency of the method is studied by calculating number of theoretical plates and was found as 14,400. Peak area ratios of standard gatifloxacin to that of internal standard were measured. A representative calibration graph of peak area ratio versus gatifloxacin concentration (50 to 400 ng/spot) resulted in regression equation y=0.0133 x+0.9082 (r = 0.9900).

Table 1: Intra and inter day precision of determination of gatifloxcin in plasma

The recovery from plasma samples was detected by comparing the recovery of standards that are obtained without plasma matrix but processed similarly. The accuracy was calculated as a percentage of spiked/ nominal concentration.

The authors thank Cipla Pharmaceuticals Ltd, Mumbai for the gift sample of gatifloxacin and Medoform Pharmaceuticals Ltd., Chennai for paracetamol and M/S SNR and Sons Charitable trust, Coimbatore for providing facilities to carry out the work.