A simple and reproducible high performance thin layer chromatography method for the determination of tinosporaside in Tinospora cordifolia was developed and is described. This method involves separation of compounds by TLC on pre-coated silica gel 60F 254 plates with a solvent system of toluene: acetone: water (5:15:1) and scanned using densitometric scanner in UV reflectance photomode at 220 nm. The linearity was observed in the range of 0.5 to 8 mg. The tinosporaside content of 0.40% w/w was observed in test sample. The average percentage recovery value of 99.24±0.49 was obtained. The proposed method being precise and sensitive can be used for detection, monitoring and quantification of tinosporaside in Tinospora cordifolia.

Standardization of ayurvedic drugs and plant materials is the need of the day. Several pharmacopoeias containing monographs on plant materials describe only the physico-chemical parameters. Hence, modern methods describing the identification and quantification of active compounds in the plant material may be useful for proper standardization of herbs and their formulation. Tinospora cordifolia (Menispermaceae) is one such plant which is widely used in indigenous system of medicine. The stems have been used for centuries, in ayurvedic preparations for the treatment of jaundice, diabetics, skin diseases and anemia [1]. The plant has been shown to possess anti-inflammatory and anti-allergic properties [2]. More recently, the immunomodulatory properties [3], antioxidant [4] and antineoplastic [5] activities have been reported. Among the complex mixture of biologically active compounds in the plant, tinosporaside can be used as an analytical marker to determine the quality of plant material of different sources.

The tinosporaside was isolated by using following procedures. The powdered stem bark (3 kg) of Tinospora cordifolia was allowed to pass thorough SS sieve (20 mesh) before extraction. It was defatted by treating with petroleum ether (60-80°) and then extracted to exhaustion (Soxhlet) with methanol. The extract obtained was concentrated in vacuum at reduced pressure at about 100 ml. Ethyl acetate was added into concentrated extract slowly with continuous stirring till brown solid precipitate was formed which was collected and dried. The residue was then refluxed with benzene (500 ml) for about 24 h. And the benzene insoluble material was collected and dried. The above residue was subjected to column chromatography (1.2×95 cm) packed with 50 g of silica gel (100-200 mesh). Elution was carried out with increasing methanol concentration in chloroform. The flow rate was adjusted to 10 ml/hr. The fractions were collected and pooled together based on TLC results. The fraction obtained with 5% methanol in chloroform gave tinosporaside which was recrystallized from methanol as white needles (1.20 g). The isolated tinosporaside was characterized by IR, UV, Mass and NMR spectroscopic techniques. The structure of the tinosporaside is given in fig. 1. 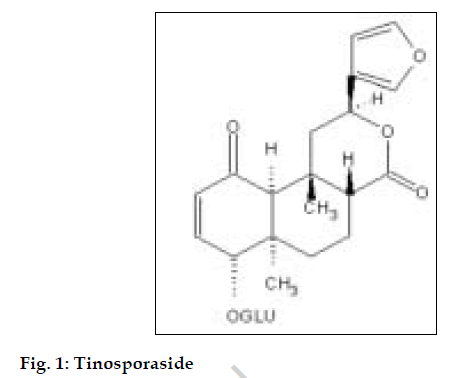 Extensive literature survey revealed that the plant is well researched for its therapeutic action. A suitable sensitive and reliable quantitative (HPTLC) method has been developed for the first time for quality control determination of tinosporaside from Tinospora cordifolia. Presently, this technique is extensively being used for quantification of plant extracts because of its simplicity, accuracy, cost effectiveness and rapidity.

The leaves of Tinospora cordifolia were collected from our campus and identified in the Department of Pharmaceutical Sciences, Birla Institute of Technology, Mesra, Ranchi where a voucher specimen is maintained.

Around 20 g of air dried sample was ground to pass through 20 mesh SS sieve and 5 g from it was accurately weighed and refluxed with 50 ml of methanol for about 2 h. The resulting solutions were filtered, concentrated under vacuum; redissolved in methanol (25 ml) and the final volumes were made up to 50 ml. This solution was used for further HPTLC analysis as per the procedure mentioned below.

A Camag HPTLC system equipped with a sample applicator Linomat IV, twin rough plate development chamber, TLC scanner III and integration software CATS 4.0 was used. An aluminum plate (10 x 10 cm) precoated with silica gel 60F 254 (E. Merck) was used as an adsorbent. Toluene, acetone and water in the ratio of 5:15:1 were used as a mobile phase. The solvent was allowed to run up to 80 mm and the chromatograms were scanned at 220 nm. A 0.5 mg/ml solution of tinosporaside reference standard was prepared in methanol as a stock solution.

The test sample was shaken well and 15 μl was applied on a TLC plate along with 1, 2, 4, 8 and 16 μl of standard tinosporaside. Likewise three such plates were prepared. The plates were developed up to 80 mm under chamber saturation condition. After airdrying the solvent, the plates were scanned at 220 nm in UV reflectance mode. The amount of tinosporaside present was determined using the calibration curve plotted between concentration and area of standard. The regression equation was found to be, Y=327.58x + 238.42 with a correlation coefficient of 0.9991. 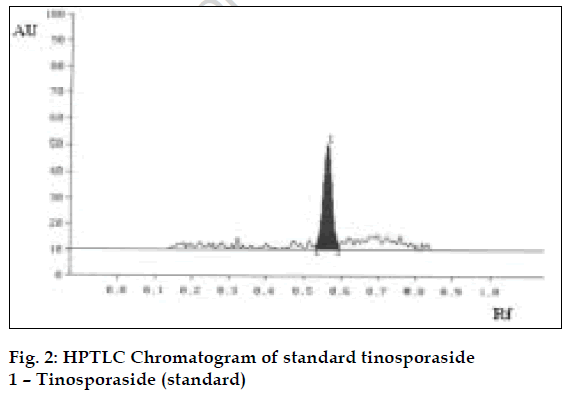 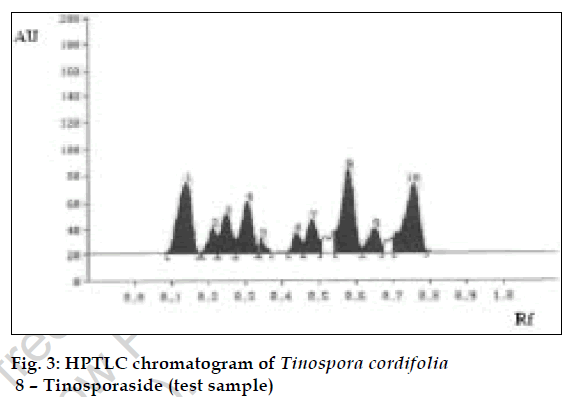 The calibration curve was linear in the range of 0.5 to 8 μg for tinosporaside. Further a correlation coefficient 0.9991 indicates good linearity between concentration and area. The method allows reliable quantification of tinosporaside and previous good resolution from other constituents of Tinospora cordifolia. To ascertain the purity of peak in test sample, its in situ reflectance spectrum was compared with that of standard. The recovery values 98.75 to 99.72% (average of 99.24±0.49), which were obtained indicate excellent reliability and reproducibility of the proposed method. It can be concluded that the proposed HPTLC method is rapid, simple and accurate for quantitative monitoring of tinosporaside in Tinospora cordifolia.

The authors greatly acknowledge the University Grants Commission, New Delhi, for their financial assistance to carryout this work.