The bioequivalence of two different tablet formulations containing losartan potassium 100 mg was determined in healthy volunteers after a single oral dose in a randomized crossover study. Test and reference products were administered to 60 volunteers with 240 ml water after overnight fasting. Plasma concentrations of losartan and its active carboxylic acid metabolite were monitored over a period of 36 h after drug administration by validated LC/MS/MS analytical method. The pharmacokinetic parameters C max , AUC 0-t , AUC 0-Íµ, AUC 0-t /AUC 0-Íµ, t max , K el and tÎŤ were determined from plasma concentration time profile of both formulations for losartan and its active metabolite losartan carboxylic acid and were found to be in good agreement. The carboxylic acid metabolite was considered for profiling purpose only. The analysis of variance did not show any significant difference between the two formulations and 90% confidence intervals for the ratio of C max (84.89-104.09%), AUC 0-t (95.84-102.84%) and AUC 0-Íµ (96.43-103.25%) values for losartan between the test and reference products were within the 80-125% interval, satisfying the bioequivalence criteria of the US FDA guidelines. These results indicate that the test and the reference products of losartan potassium are bioequivalent and, thus, may be prescribed interchangeably.

Hypertension is a chronic medical condition in which the blood pressure in the arteries remains above the normal recommended range. It leads to the development of cerebrovascular disease, ischemic heart disease, cardiac and renal failure. Following treatment of hypertension, 40% reduction in the risk of stroke and 15% reduction in the risk of myocardial infarction is achieved [1]. 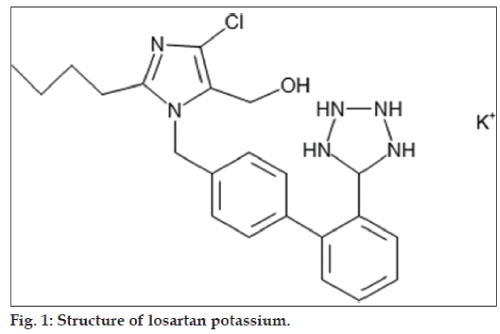 It is observed in clinical trials that losartan effectively lowers blood pressure as the other first line antihypertensive drugs [3]. Usually, LP is preferred in the management of essential hypertension because of lower incidence of side effects like cough. It is readily absorbed and via cytochrome P‑450 system it undergoes rapid hepatic metabolism to form an active metabolite, EXP‑3174 [4]. The active metabolite contributes to a great extent to its antihypertensive effect, which lasts over 24 h after once‑daily administration [5]. Its oral bioavailability is only 33%, while the remaining amount is excreted unchanged in faeces. This is due to its poor absorption in lower gastrointestinal tract and short elimination half‑life of 1.5‑2 h [6]. Angiotensin II receptor antagonists show improved safety profile than those of ACE inhibitors and there is growing supporting evidence for that [7].

FDA has defined bioequivalence as the absence of a significant difference in the rate and extent to which the active moiety in the drug products becomes available at the site action when administered at the same molar dose and under similar conditions [8]. The rising cost of medicines increases the overall cost of health care. Generic equivalents of branded or innovator drugs lower the cost of medication [9]. This saved about $8.8 billion or about 11% of expenditures on drugs for adults, in the United States each year at the same time providing quality [10]. In a study more than 50% of respondents were comfortable accepting a generic medication for a branded medication and didn’t mind when their pharmacist switched their prescriptions to a generic medication, while 30.5% disagreed to accept generic medication. About two‑thirds of prescriptions in the United States was generic drugs that provided 13% reduction in medication costs [11]. Due to increased demand, it is advisable that the pharmaceutical quality, safety, and efficacy of generics ought to be compared with the corresponding comparator product. “Orange Book” published by the FDA contains a list of approved drug products with therapeutic equivalents [12]. “In vivo equivalence” or “bioequivalence” studies are carried out to assess the “interchangeability” between the innovator and generic products [9].

The primary objective of this study is to demonstrate bioequivalence between the test product, losartan potassium tablets 100 mg of Micro Labs Ltd., India and the reference product, Cozaar® 100 mg of Merck and Co., INC., USA, under fasting condition in normal, healthy, adult, male and female human subjects, in a randomized crossover study.

The study was conducted with prior approval from the Institutional Ethics Committee (Protocol No: ARL/08/229, Approval Date: 17 Nov 2008) and according to the current version of the declaration of Helsinki (Ethical Principles for Medical Research Involving Human Subjects, Revised by World Medical Association General Assembly Tokyo, 2004), current ICH GCP guidelines, Indian Council of Medical Research (ICMR) guidelines and Central Drugs Standard Control Organization (CDSCO) guidelines. The informed consent form was obtained from each subject for his or her participation in the study.

Sixty healthy volunteers (52 male and 8 female) with age (26.38±5.05 years), weight (58.25±7.48 kg) and height (164.02±7.25 cm) satisfying the inclusion and exclusion criteria were enrolled in the study, out of which 58 subjects completed the study. Prior to participation in the study all the volunteers underwent physical examination and general medical checkup. Pathological investigation was performed on blood and urine samples. ECG was taken for all volunteers. The volunteers were found to be healthy and with no history of cardiovascular, renal, hepatic, ophthalmic, pulmonary, neurological, metabolic, haematological, gastrointestinal, endocrine, immunological or psychiatric diseases. Subjects had no history of drug hypersensitivity and were not under any drug treatment. They were instructed to abstain from taking any medication one week prior to and during the study period.

The randomization for this two treatment, two period, two sequence cross‑over bioequivalence study was generated by the biostatistician using the PROC PLAN programme on statistical software SAS® 9.1.3. All the subjects were divided into blocks of equal size. Thus, random allocation of drug products was balanced over the period and sequence. In each period, subjects were administered either the test or the reference product, according to the randomization schedule. The analyst concerned, was blinded to the sequence of administration of test and reference product to the individual subjects.

Single oral dose of test or reference product was administered as per the randomization schedule with about 240 ml of water at ambient temperature in sitting position after an overnight fasting of at least 10.00 h. Compliance for dosing was assessed by a thorough check of the oral cavity by using a tongue depressor and torch immediately after dosing. Water was not accessible to the subjects 01.00 hour pre‑dose and post‑dose except about 240 ml of water given during drug administration in each study period. Subjects remained seated for the first 02.00 h post‑dose except for any procedural reason in each study period. Standardized meal was given to the subjects during check‑in night (in such way to maintain at least 10.00 h pre‑dose fasting) and at around 04.00, 09.00 and 13.00 h post‑dose in each study period.

The principal investigator monitored safety data throughout the course of the study. A qualified medical officer experienced in conducting bioequivalence study was available during housing in the clinical center. Subjects were monitored throughout the study period for occurrence of adverse events. Subjects experiencing any adverse event were followed up until their resolution. Subjects who at least received one dose of the study medication were included in the safety analysis.

The analysts were blinded to the sequence of administration of test and reference products to the individual subjects. The plasma samples were stored in labeled vials, which were not identified by product details. Losartan, its metabolite LCA and internal standard were extracted from human plasma by solid phase extraction. A total of 3359 plasma samples were analyzed for the content of Losartan and its metabolite, LCA by a validated LC/MS/MS method. The method of analysis was validated according to international guidelines.

Al1 the statistical analysis was performed using SAS® 9.1.3. The plasma concentrations at each sampling time points were tabulated for individual subject and product combination, together with descriptive statistics. All the below limit of quantitation (BLQ) values were considered as zero for the computation of pharmacokinetic parameters and statistical calculations. MS (missing sample) and MSV (missing sample values) were given an arbitrary code as 999999 in calculation of pharmacokinetic parameters using SAS. The mean plasma concentration of losartan and LCA versus time profiles for each product was presented graphically on both the scales i.e. on the untransformed and log‑transformed data. The actual blood sampling time point were considered for the calculation of pharmacokinetic parameters Cmax, AUC0‑t and AUC0‑∞, using SAS® 9.1.3.

ANOVA was performed (at P=0.05) on the log‑transformed pharmacokinetic parameters Cmax, AUC0‑t and AUC0‑∞ for losartan. The analysis of variance model included sequence, subjects nested within sequence, period and treatment as factors. Each analysis of variance also included calculation of least‑square means, adjusted differences between formulation means and the standard error associated with these differences. The significance of the sequence effect was tested using the subjects nested within the sequence as the error term. The 90% confidence intervals for the difference between treatments, geometric means (GM) were calculated for log‑transformed Cmax, AUC0‑t and AUC0‑∞. The confidence interval was expressed as a percentage relative to the least square mean (LSM) of the reference treatments. The geometric least square mean ratios of the test and reference product of losartan and its 90% confidence interval on the log‑transformed pharmacokinetic parameters Cmax, AUC0‑t and AUC0‑∞ were computed and bioequivalence was concluded if the confidence interval lie within the acceptable range of 80‑125%.

From 60 subjects enrolled into the study, 58 completed it and their results were analyzed and used for pharmacokinetic and statistical analysis. One subject was withdrawn from the study in Period‑I after 3.00 h blood sample collection due to occurrence of adverse events of vomiting. Another subject did not report on the enrolment day of Period‑II due to personal reason.

The plots of the mean plasma concentration‑time profile over 36 h sampling period after drug administration are presented in figs. 2‑5 for both untransformed and log‑transformed data for losartan and LCA. The plasma concentrations of losartan and LCA did not differ significantly after administration of both formulations, i.e. test and reference tablet of losartan potassium. The pharmacokinetic parameters and statistical evaluation of losartan are summarized in Table 1. No significant differences in pharmacokinetic parameters were observed between the test and reference formulations. The mean AUC0‑t/AUC0‑∞ ratio of losartan for the test and reference products were 95.38% and 95.83%, respectively and of LCA were 96.31% and 95.89%, respectively. 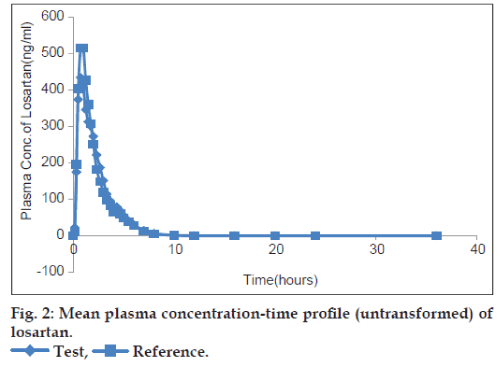 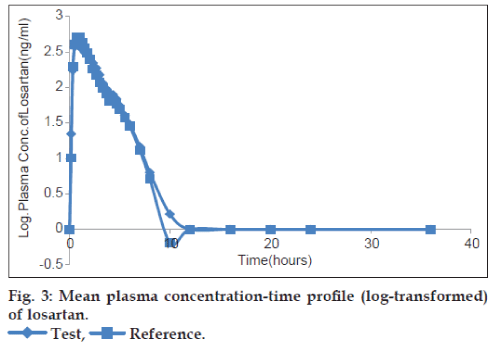 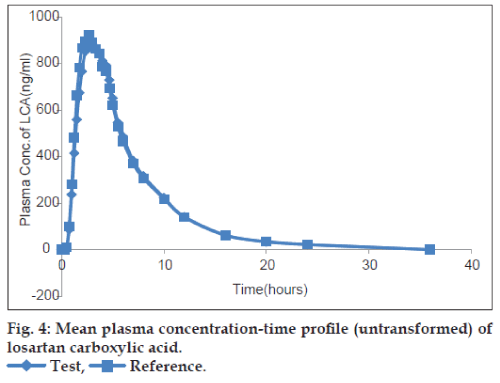 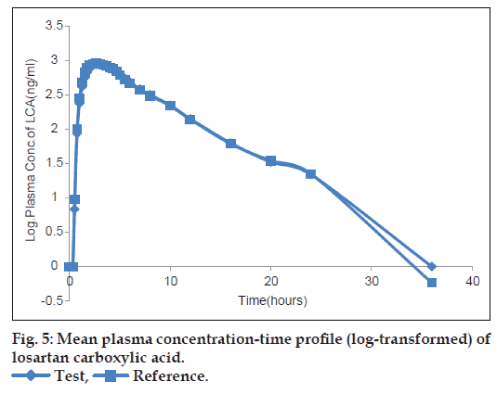 The 90% confidence intervals for the intra‑individual ratios (test/reference) for AUC0‑t, AUC0‑∞ and Cmax of losartan are presented in Table 2. In accordance with the study protocol, the hypothesis of bioequivalence of the formulations was accepted if the 90% confidence interval of the ratio of geometric means of test to reference product was within the acceptance range of 80‑125% for log‑transformed Cmax, AUC0‑t and AUC0‑∞ for losartan. No median difference was registered concerning tmax of both products. The multivariate analysis accomplished through ANOVA for the assessment of sequence, period and treatment effects for log‑transformed pharmacokinetic parameters AUC0‑t, AUC0‑∞ and Cmax of Losartan is represented in Table 3. It reveals the absence of any of these effects in the present study, indicating that the crossover design was properly performed.

Geometric mean has been taken as the antilog (exponential) of the least square mean of the log-transformed data. T/R: Test/reference, CI: confidence interval,AUC: area under the curve, ISCV: intra-system coefficients of variation

Statistical comparison of AUC0‑t, AUC0‑∞ and Cmax clearly indicated that there was no significant difference between the test product, losartan potassium tablets 100 mg and the reference product, Cozaar® 100 mg tablets in terms of rate and extent of absorption under fasting condition. The 90% confidence intervals for the mean ratio (T/R) of AUC0‑t, AUC0‑∞ and Cmax were entirely within the FDA acceptance range. Based on the pharmacokinetic and statistical results of this study, we can conclude that the two products are bioequivalent, and can be considered interchangeable in medical practice.

We thank the Accutest Research Lab (I) Pvt. Ltd., Ahmedabad, India for providing their facilities for the conduct of this study.