Degradation products of itopride formed under different forced conditions have been identified using LC-PDA and LC-MS techniques. Itopride was subjected to forced degradation under the conditions of hydrolysis, photolysis, oxidation, dry and wet heat, in accordance with the International Conference on Harmonization. The stress solutions were chromatographed on reversed phase C18 (250×4.6 mm, 5 μm) column with a mobile phase methanol:water (55:45, v/v) at a detection wavelength of 215 nm. Itopride degraded in acid, alkali and oxidative stress conditions. The stability indicating method was developed and validated. The degradation pathway of the drug to products II-VIII is proposed.

Itopride hydrochloride is a novel, synthesized, gastro prokinetic drug, which stimulates gastrointestinal motor activity through the synergistic effects of dopamine D2-receptor blockade and acetylcholine esterase inhibitors [1-3]. Chemically, it is N- [p- 2(2-(dimethylamino)ethoxy)-benzyl] veratramide hydrochloride. Benzamide structure, amide and ether linkages in the drug molecule make it susceptible to degradation. Due to lability of these linkages and functional groups to hydrolysis and oxidation, several degradation products were anticipated to be formed during stability testing of the drug [4].

Itopride is not official in any pharmacopoeia. Few analytical methods have been reported for the quantitative estimation of itopride. Mushiroda et al. [5] have reported HPLC method with fluorescence detection. The limitation of this method was the use of a high ratio of buffer solution in the mobile phase that can cause damage to the reverse phase column. Takahara et al. [6] have reported HPLC method for the simultaneous determination of itopride and its metabolites in human serum and urine using automated column switching. Two sensitive and reproducible HPLC and HPTLC methods have been described for the quantitative determination of itopride hydrochloride in the presence of its degradation products [7]. HPTLC method for the determination of itopride hydrochloride in pharmaceutical preparation and bulk drug has been reported [8]. However, no degradation products of itopride were identified in the reported methods.

Thus, the purpose of the present study was to develop a validated stability indicating HPLC method and identify the degradation products of itopride formed under ICH recommended stress conditions of hydrolysis, photolysis, oxidation, dry and wet heat [9-11] taking the aid of LC–PDA and LC–MS techniques.

An accurately weighed sample (25 mg) of itopride was transferred in a 25 ml volumetric flask and dissolved in methanol to obtain solution strength of 1000 μg/ml. For preparing standard solution, 1 ml of this solution was transferred in 25 ml volumetric flask and made up to volume with mobile phase. Standard calibration solutions (5-500 μg/ml) for linearity assessment were prepared from 1000 μg/ml stock solution by diluting with mobile phase.

All stress decomposition studies were performed at an initial drug concentration of 1 mg/ml. Acidic and alkaline hydrolysis were carried out in 1.0 N HCl and 1.0 N NaOH, respectively and heated at 80º for 4 h and neutral hydrolysis was performed in water at 80º for 12 h. The acid and alkaline stress solutions were neutralized and stored in cold cabinets. Oxidative stress was carried out in 15% H2O2 at 70º for 4 h in the dark to avoid photo-oxidation. Solid drug was exposed to thermal stress in dark at 100º for 24, 72 and 168 h for dry heat and wet heat treatment. Photolytic stress was determined by exposing the solid drug to 1.2 million lux h fluorescent light and 200 Wh/m2 UV. Later the intensity was increased by two to five times to establish the photostability of itopride. All the reaction solutions were suitably diluted with mobile phase before HPLC analysis. Peak purity analysis was performed to determine the percentage degradation and total loss of the API during the formation of forced degradants. A parallel set of three stress samples were generated for every stress condition viz, the blank subjected to stress in the same manner as the drug solution, zero time sample containing the drug stored under normal conditions and the drug solution subjected to stress treatment. The comparison of these stress solutions gave a real assessment of the changes in the intrinsic drug stability.

Itopride and its forced degradants were separated on a Kromasil C18 column (250×4.6 mm, 5μm) with 55:45 (v/v) methanol: water as the mobile phase. The flow rate was maintained at 1 ml/min and the eluent was monitored at 215 nm using diode-array detection controlled by ChromNAV software.

The proposed method was validated as per ICH guidelines [13]. The linearity of the method was determined at a concentration range of 5-500 μg/ ml for itopride. 10 μl of each solution was injected in the system to obtain calibration graph of peak area against concentration. RSD (%) of the slope and intercept of the calibration plot was calculated. The limit of detection (LOD) and quantification (LOQ) was determined respectively at a signalto- noise ratio of 3 and 10 by injecting a series of dilute solutions of itopride of known concentration. Intra-day and inter-day precision was established by analyzing 100, 200 and 300 μg/ml drug solutions in triplicate on the same day and on consecutive days respectively. Accuracy was determined by spiking 0.1% of impurity in three known concentrations of the drug, viz., 100, 200 and 300 μg/ml in triplicate and the percent recovery of the analyte from the impurity was determined. Specificity of the method was established by the peak purity determination using a PDA detector. The resolution factor for the drug and nearest resolving peak was determined. Peak purity as well as the resolution was determined for all the degradation product peaks, in addition to the drug peak, to prove the selectivity of the developed method. Robustness of the method was performed by deliberate changes in chromatographic conditions such as change in flow rate (±10%), organic content in mobile phase (±2%), wavelength of detection (±5%) and pH of the mobile phase (±0.2%). The stability of itopride standard solutions and sample solutions was tested by analysis after 24, 48, and 72 h. The responses for the aged solution were evaluated by comparison with freshly prepared solutions.

The stressed solutions, in which sufficient amounts of products were formed, was treated suitably and subjected to LC-PDA and LC-MS studies for the identification of forced degradation products. Two impurities are already known for itopride namely, dimethyl amino ethyl benzyl amine (DEBA) and veratric acid chloride. However, the drug was found to exhibit more than two impurities in the stress samples. LC–MS studies were carried out using positive electrospray ionization. The chromatographic conditions used for LC–MS analyses were the same as that for LC–PDA analyses, except that injection volume was 10 μl. A splitter was placed before the mass detector, allowing entry of only 30% of the eluent. LC–MS scans of the drug and all degradation products in ESI mode were recorded in the range of 50–3000 m/z and masses of the peaks were recorded for accurate mass measurements.

Itopride was susceptible to acid, alkali and oxidative stress conditions. The drug was stable to photolytic and thermal stress as no decrease in area of drug peak was observed. The detailed results of forced degradation studies of itopride are presented in Table 1. The stressors, choice of their concentration and preparation of stress samples were established to achieve a target degradation of 10-20% with respect to the active ingredient for development of stability indicating method. Different logical modifications like the change in pH, different mobile phase compositions and column temperature adjustment were tried to get good separation between the drug and the degradation products, as well as between the degradation products. Use of phosphate buffer was avoided so as to extend the separation method to LC-MS analysis. The best separation was achieved on a C18 column with methanol: water in the ratio of 55:45 at a flow rate of 1 ml/min as the mobile phase and detection wavelength of 215 nm. The method was found to unequivocally separate the forced degradation products from the analyte as shown in fig. 1.

aSolid itopride was exposed to photolysis for 15 days to assess photo lability. bPeak purity values in the range of 990–1000 indicate a homogeneous peak The summarized results of method validation are presented in Table 2. Response of the drug was a linear function of concentration over the range 60-300 μg/ml. The mean values of the slope, intercept, and correlation coefficient (±RSD) were 297.585, 9134.009 and 0.9983, respectively. The method was precise as the RSD values from studies of intra-day and inter-day precision were <1% and <2%, respectively, which is in accordance with the ICH guidelines. Accuracy of the method was determined and found to be 98.8- 100.1%. The signal/noise ratios 3:1 and 10:1 were considered as LOD and LOQ, respectively. LOD and LOQ were found to be 0.019 μg/ml and 0.353 μg/ml respectively. Specificity of the method was established by determining the peak purity using a PDA detector. The resolution factor for the drug and nearest resolving peak was determined. Peak purity as well as the resolution was determined for all the degradation product peaks, in addition to the drug peak, to prove the selectivity of the developed method. Influence of deliberate changes in chromatographic conditions such as change in flow rate (±10%), organic content in mobile phase (±2%), wavelength of detection (±5%) and pH of buffer in mobile phase (±0.2%) studied to determine the robustness of the method were also in favor of the developed LC method for the analysis of itopride. The solution stability experiment data confirmed that sample solutions used during assay were stable up to 48 h. 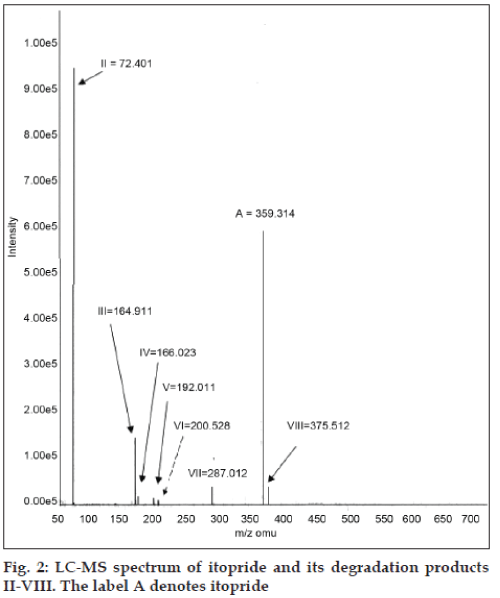 Fig. 2: LC-MS spectrum of itopride and its degradation products II-VIII. The label A denotes itopride

Table 3: Interpretation Of The Lc-Ms Data And Fragments Of The Drug

The postulation of degradation route followed by itopride is presented in fig. 3. The drug readily underwent amide hydrolysis under acidic and alkaline conditions to form DP-IV, DP-V and DP-VI. Formation of DP-IV is attributed to alkaline hydrolysis with poor amine as the leaving group. DP-VIII was formed under oxidative stress conditions. The fragmentation of ether linkage resulted in formation of low UV absorbing species, DP-II and DP-VII. The drug showed lability towards photolysis due to the presence of benzamide moiety, but the impurity was not quantified due to low ionization.