The current study was aimed to screen borapetoside C, cordifolioside A, and magnofl orine against targets that are involved in the pathogenesis of type 2 diabetes mellitus. All active compounds were retrieved from PubChem database and protein molecules were downloaded from Protein Data Bank. Each protein was prepared using Discovery studio, and the binding pocket was predicted using castP. Each ligand was docked against the target proteins using AutoDock 4.0 Drug-likeness, toxicity and probable antidiabetic activity of each compound were also predicted. Among the three phytoconstituents, magnofl orine scored highest druglikeness score and also predicted to be a potent antidiabetic molecule. Comparisons were made with two clinically approved antidiabetic drugs i.e. sitagliptin and repaglinide.

Diabetes mellitus (DM) is a chronic metabolic disorder due to defective insulin secretion or resistance, or a combination of both that leads to various health complications[1]. According to a global report of World Health Organization (WHO) 2017, the prevalence of diabetes in adults aged 20-79 y was estimated to be 8.8 % in 2015 and expected to rise to 10.4 % in 2040[2]. Synthetic molecules are prescribed for the pharmacotherapy of type 2 diabetes mellitus (T2DM) but they possess well-known side effects[3,4]. Since active phytoconstituents from traditional medicinal plants are believed to possess lower side effects[5], these could be used to discover new drug molecules. The WHO has also recommended investigating hypoglycaemic agents from folk medicinal plants as antidiabetic drugs[6].

Species of genus Tinospora are widely used as a folk medicine for various purposes[7]. Tinospora species have been reported to possess antidiabetic, antioxidant, immunostimulatory and antiosteoporosis activities. Further, Ayurveda has listed T. cordifolia in the management of diabetes. T. capillipes and T. sinensis are also officially listed in Chinese Pharmacopoeia[7,8]. Borapetoside C is one of the active phytoconstituents from T. crispa while cordifolioside A and magnoflorine are the major phytoconstituents from T. cordifolia and were reported to cause a reduction of oxidative stress and regularise carbohydrate metabolism[9-11] in experimental models of T2DM. However, the molecular mechanism responsible for the blood glucose lowering effect has not been understood.

Hence, an in silico study was performed to screen borapetoside C, cordifolioside A, and magnoflorine as antidiabetics against known targets such as 17β-hydroxysteroid dehydrogenase, retinol binding protein, C-jun N-terminal kinase, cholesteryl ester transfer protein, Lamin A/C, protein kinase B, adiponectin, insulin degrading enzyme, PPARG, human glucose transporter and adenylate cyclase, which have been implicated in the pathogenesis of T2DM and associated complications. The results were compared to those of repaglinide and sitagliptin, 2 clinically used antidiabetic drugs.

All 2D and 3D structures of borapetoside C, cordifolioside A, magnoflorine, repaglinide, and sitagliptin were retrieved from PubChem database (https://pubchem.ncbi.nlm.nih.gov/) in .sdf format and converted into .pdb and .mol using Discovery studios 2016. Canonical SMILES were also retrieved from PubChem database. Canonical SMILES explains the molecular structure as a graph with optional chiral indications. The energy of ligand molecules was minimized using mmff94 (https://open babel. readthedocs.io/en/latest/Forcefields/mmff94.html) force field and conjugate gradients as an optimization algorithm. Energy minimization is an important step in the preparation of a ligand to abolish clashes within the atoms of a ligand molecule and produce a reasonable staring pose. The energy minimized ligand molecules were then converted into AutoDock ligand in the format of .pdbqt. All the 2D structures of compounds are shown in fig. 1.

All the targets were retrieved from Protein Data Bank (https://www.rcsb.org). The retrieved 3D structures of proteins were combined with water and other hetero molecules. Discovery studio 2016 was used to remove water molecules and heteroatoms. Water molecules and other heteroatoms were removed to clear the binding pocket and make computations easier so that ligand can create satisfying interactions with the protein. The chain was selected based on their completeness of amino acid residue and presence of the active site. This modified protein was then saved in .pdb format. An online tool, Computed Atlas of Surface Topography of proteins[12] was used to predict a number of mouth opening, pocket MS area, pocket MS volume, mouth MS area and mouth MS circumference sum of each protein under the radius probe of 1.4 angstroms.

Drug-likeness character (Lipinski's rule of five) is associated with absorption, bioavailability, and biodistribution of the drug molecule from the human intestinal tract. This prediction is made before the molecule is synthesized in the laboratory or extracted from the natural source. Hence, molsoft (http://molsoft. com/), an online server was used to predict the druglikeness character of all the selected ligand molecules.

Various pharmacokinetic parameters of drug molecules and probable toxicity in different models were predicted by using an online server, admetSAR. Blood-brain barrier permeability, human intestinal absorptivity, caco-2 permeability, AMES toxicity, aqueous solubility, rat acute toxicity, and fish toxicity were predicted. The server was also used to predict the possible interaction of drug molecule with various isoenzymes. The prediction was based on a vector machine classification algorithm and in-house substructure pattern recognition method, which were built via regression methods[13]. Similarly, Escherichia coli toxicity of each molecule was predicted using abSYNTH[14]. The probable antidiabetic activity of these 3 molecules was also predicted via the PASS online. PASS online predicts about 4000 probable pharmacological activities with an average probability of 0.95 based on structure-activity relationships[15].

Docking was performed using AutoDock Vina. It uses sophisticated gradient optimization method to calculate grid maps and provides the cluster of results[16]. After the completion of docking, 10 docking poses of ligand were obtained. The pose with minimum binding energy was selected for visualizing the ligand-protein interaction.

Table 1: Number of binding pocket/openings, mouth volume area and circumference of each of the protein

Cordifolioside A scored highest binding affinity to the majority of the selected protein molecules, but this parameter alone could not be considered for the drug development process. Hence, Lipinski's rule of five, a qualitative parameter, was used to understand the druglikeness character of each molecule. Magnoflorine scored highest drug-likeness value compared to other compounds tested. Further, pharmacological activity prediction of all the phytoconstituents suggested that magnoflorine to be a potent antidiabetic molecule as shown in fig. 2. Personalized medicine concept is based on mutagenicity involving the genes that encode CYP2D6 and CYP2C19[18]. Current study showed that the selected phytoconstituents were not a substrate for CYP2D6 nor inhibitors of CYP2D6 and CYP2C19. However, predicted result showed that CYP2C19 mutagenicity test is necessary for sitagliptin. 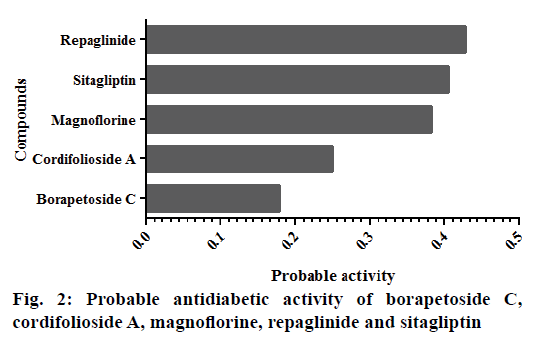 Figure 3: Summary of the study

Borapetoside C, cordifolioside A and magnoflorine are the three molecules reported to possess antidiabetic activity from various modes. Borapetoside C is reported to lower the blood glucose by enhancing insulin sensitivity and GLUT2 expression followed by Akt phosphorylation[10]. Similarly, cordifolioside A is reported to improve insulin signaling and hepatic metabolism during insulin resistance. Further, it is reported to lower the blood glucose and cholesterol level[19]. Magnoflorine is reported to have a direct effect on carbohydrate metabolism, increase the insulin sensitivity and reverse diabetes-associated alterations in lipid profile and oxidative stress[20]. Repaglinide is reported to stimulate the release of insulin from beta cells of the pancreas by increasing the intracellular calcium level[21]. Sitagliptin is a selective DPP-4 inhibitor to minimize the inactivation of various incretin hormones, which are involved in the regulation of glucose homeostasis[22]. Further, the role of selected target protein molecules in the pathogenesis of diabetes mellitus is summarized in Table 4.

Table 4: Details of the role of target proteins in diabetes.

In conclusion, the current study projected magnoflorine as a potential molecule to interact with majority of proteins that are implicated in the pathogenesis DM. The current study also reported that these predictions were comparable to those of repaglinide and sitagliptin. The findings of current study is based only on computational predictions, which needs to be further proven by well designed wet-lab protocols.