Interaction between inherent antioxidant defence system and various reactive species inside the body has pivotal role in maintaining homeostasis, the fundamental necessity of every living being. Reactive species are by-products of physiological processes, quenched by internal defence line of enzymes, vitamins and other secondary metabolites [1]. These are usually charged moieties of oxygen and nitrogen. Current life style has led to excessive production of these reactive species, mainly due to stress and eating habits [2]. Overproduction of reactive species is the main cause of diseases like cancers, rheumatoid arthritis, atherosclerosis, asthma and diabetes [3].

Antioxidants are usually aromatic compounds, capable of terminating chain reactions via protonation [4]. Antioxidants radicalize themselves to stabilize free radicals. These then stabilize the charge by delocalization of an electron in their aromatic ring [5]. An array of secondary metabolites like phenolics [6], flavonoids [7], carotenoids [8], steroids [9] and thiol compounds [10] act as antioxidants. Antioxidants have found a promising place in food industry [11], cosmetics, antiaging products [12], healthcare [13] and pharmaceutical industry [14]. Diverse uses of antioxidants and the growing market have given the impetus to discover and develop more effective and safe antioxidants from natural sources. Plants due to their vast metabolic diversity offer great dimensions for exploring new antioxidant compounds.

Acacia nilotica is a popular cosmopolitan weed of Fabaceae family. It traces a long ethnobotanical history of use to treat cold, cough, diarrhoea, dysentery, malaria, respiratory ailments and teeth problems [15]. Various parts of A. nilotica were reported to exert antibacterial [16], antiviral, antioxidant [17], antidiabetic [18] and antimalarial activities [19]. Compounds like niloticane [20], β-sitosterol [21], γ-sitosterol [22], kaempferol [23], ethyl gallate [24] and various other gallates and catechins [25] have been isolated from this plant. Analytical detection techniques, gas chromatography with mass spectrometry (GC-MS) could be a promising tool for standardization of herbal medicine. GC-MS is an easy, time efficient method for estimation of bioactive metabolites based on their charge to mass ratio [26].

Present study was a comprehensive attempt to assess in vitro antioxidant activities of six different extracts of A. nilotica leaves and a correlation between the activities and the total phenolic and flavonoid contents. Principle component analysis (PCA) was employed as statistical validation of the correlation. Study also attempted to predict the main antioxidant compounds and phytochemical profile maps of all the six extracts used in this study with GC-MS detection technique.

Full grown healthy leaves of A. nilotica were collected in October 2014 from Jhajjar district, Haryana, India. Sample was matched with herbarium specimen of A. nilotica (MDU 2601) available in the Department of Genetics, M. D. University, Rohtak (India). Leaves were washed properly and dried in shade. The dried leaves were ground into a coarse powder. Solvents used for extract preparation were, methanol, acetone, ethyl acetate, chloroform, benzene and petroleum ether. Leaf extracts were prepared by cold percolation method, filtered through Whatman filter paper No. 1 and concentrated with rotary vacuum evaporator.

TPC was estimated by using Folin-Ciocalteau assay [27]. Gallic acid (Sigma-Aldrich) was used for standard curve preparation. To 1 ml of extract (1 mg/ml) or gallic acid (20, 40, 60, 80, 100 μg/ml) 100 μl of 10 % Folin-Ciocalteau reagent was added followed by 1 ml of 7 % Na2CO3 after 5 min. Final volume was adjusted to 4 ml with distilled water. After 90 min incubation, absorbance was recorded at 765 nm using a UV/Vis spectrophotometer. Results were expressed as mg/g gallic acid equivalent (GAE).

Extracts (1 mg/ml) were added to 2 ml of freshly prepared DPPH solution (0.1 mM) with continuous shaking, incubated in darkness for 30 min and absorbance was measured at 517 nm [29]. Ascorbic acid was used as a standard. Results were expressed as % of free radicals scavenged using the formula, % free radical scavenging = (1–As/Ac)×100, where, As refers to the absorbance of sample and Ac refers to the absorbance of control.

To 2 ml of extract, 0.25 ml of 2 mM FeCl2 was added followed by 0.25 ml of 5 mM ferrozine. Mixture was kept at room temperature for 10 min. Absorbance was measured at 562 nm [31]. Percent of inhibition of ferrozine-Fe2+ complex formation was calculated from the formula, (1–As/Ac)×100, where, As is the absorbance of sample and Ac is the absorbance of control.

One milligram of β-carotene was dissolved in 1 ml of chloroform, to which 40 mg of linoleic acid and 400 mg of Tween 80 were added. Chloroform was evaporated using a rotary vacuum evaporator. Then 100 ml of distilled H2O was added with vigorous shaking to make an emulsion. Five millilitres of this emulsion was added to 0.2 ml of extract or standard. Immediately, absorbance was measured at 470 nm and then incubated at 50° for 60 min. After 60 min, absorbance was measured again at 470 nm [32]. Antioxidant activity was calculated using the formula (1–DRc/DRs)×100, where, DRc is the rate of degradation of control (ln(a/b)/60), DRs is the rate of degradation of sample (ln(a/b)/60); a= absorbance at zero time, b= absorbance at 60 min.

Plant extracts were derivatized with N,Obistrifluoroacetamide (BSTFA) to form trimethylsilyl derivatives. BSTFA and anhydrous pyridine (300 μl, 1:1) was added to 100 μl plant extract (1 mg) and incubated first at 70° for 30 min and then overnight at room temperature [33]. Derivatized samples were subjected to GC-MS analysis in a Bruker 436- GC equipped with Rtx-5 (5 % diphenyl/95 % dimethyl polysiloxane) fused capillary column (30 m×0.25 mm ID×0.25 μm df). The chromatographic conditions were, an initial column temperature of 70° for 2 min, followed by a linear gradient of 10°/min up to 300°. Injector temperature was kept at 280° and the flow rate of helium (99.9 %) gas was 1 ml/min. Injection volume of 1 μl was used (split mode with split ratio 50:1). MS used in the system was SCION SQ with MS Workstation 8 software package from Bruker. Solvent delay was 4 min and the total run was of 26 min. The eluted peaks were identified by matching with National Institute Standard and Technology library and literature.

TPC of extracts was estimated using regression Eqn. (y=0.003x+0.053, r2=0.994) obtained from gallic acid standard curve. TPC values ranged between 7.40 to 166.33 mg/g GAE for different extracts. Polar solvents were quite effective in extracting out phenols; methanol being the most effective with TPC value of 166 mg/g GAE followed by acetone. Non-polar solvents extracted out minor amount of TPC; petroleum ether being the least effective. 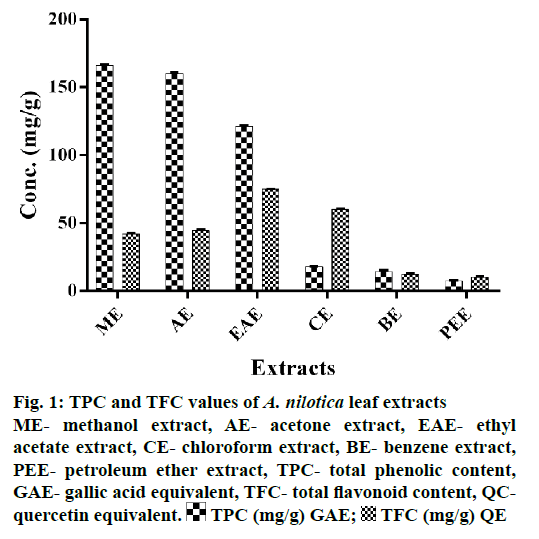 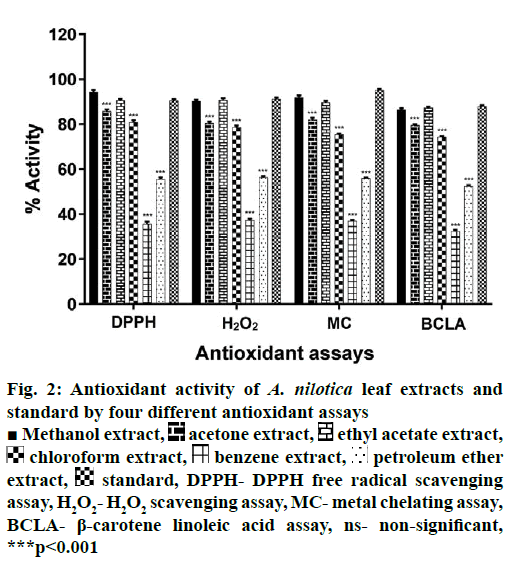 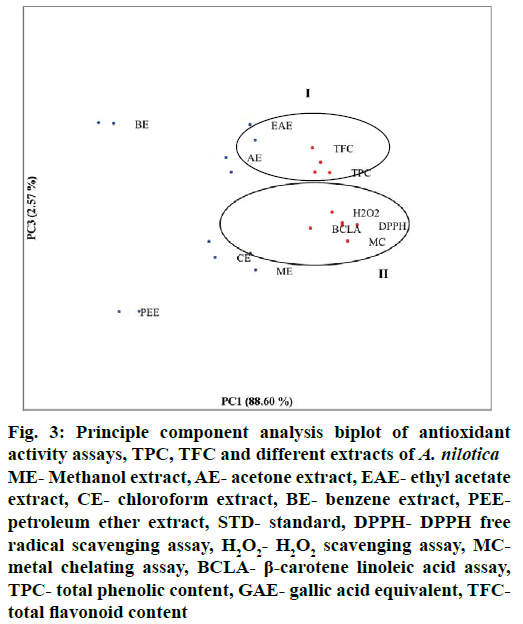 Table 2: Compounds identified in methanol and acetone extracts of A. nilotica by GC-MS

Table 3: Compounds identified in ethyl acetate and chloroform extracts of A. nilotica by GC-MS

Table 4: Compounds identified in benzene and petroleum ether extracts of A. nilotica by GC-MS 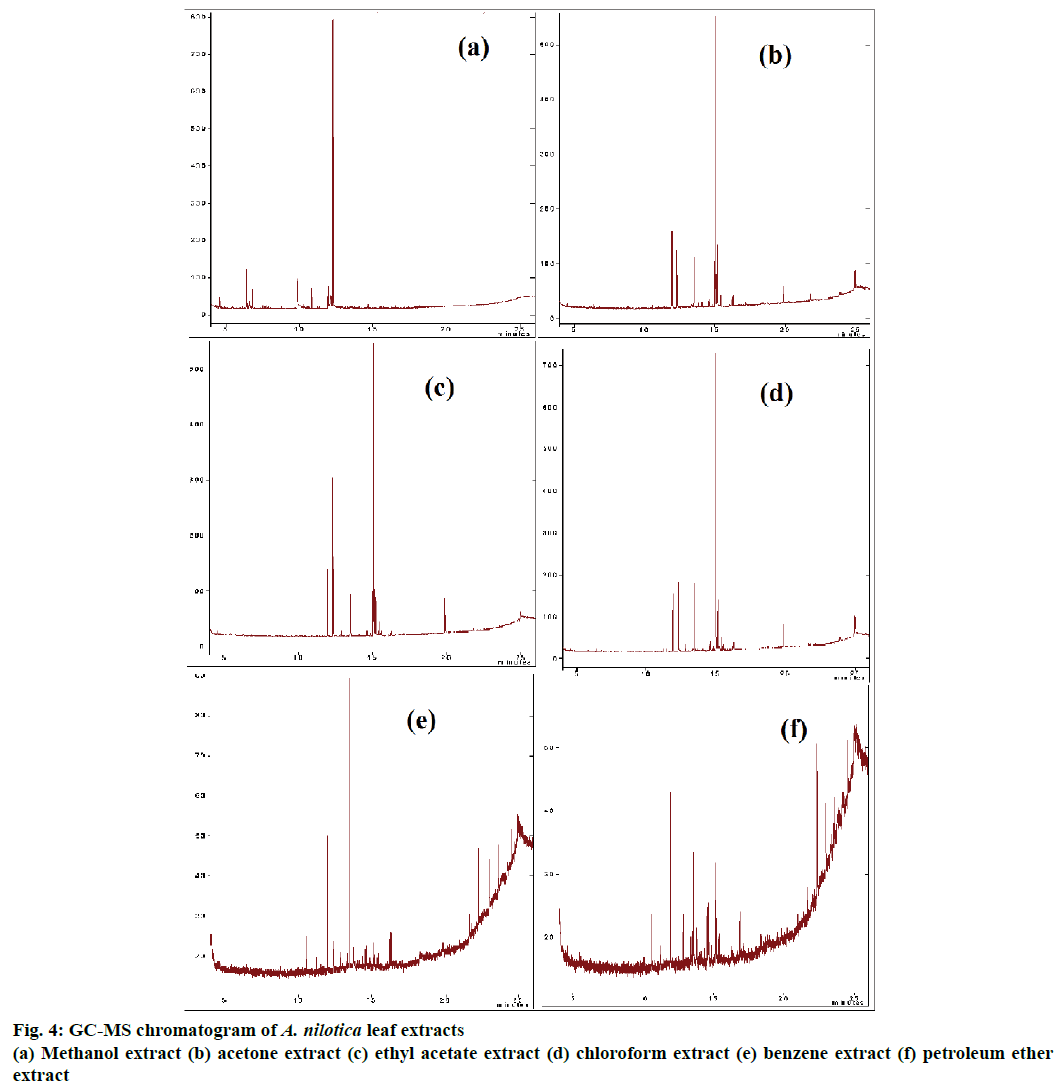 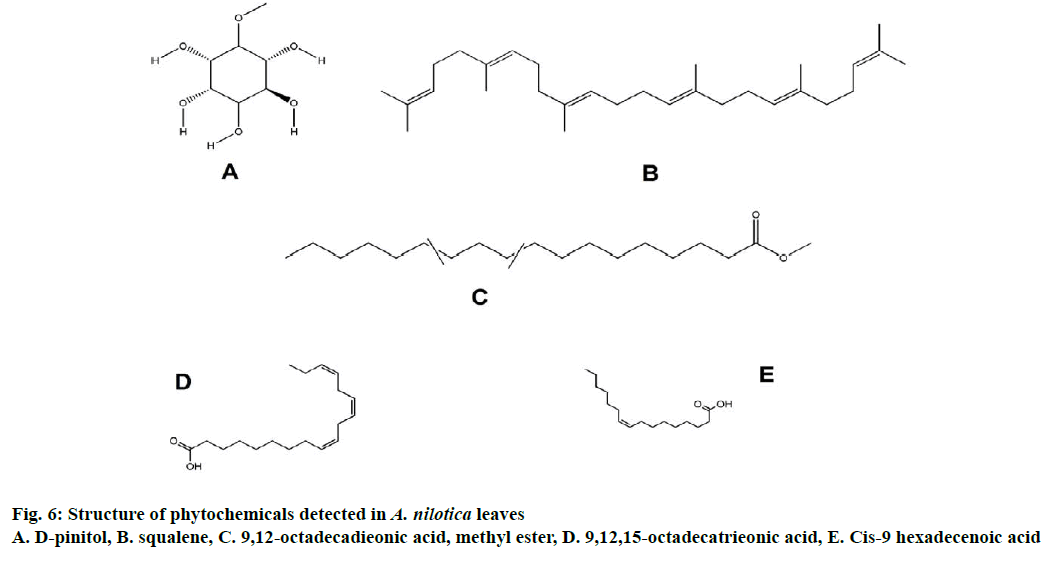 Secondary metabolites are a plants’ arsenal that act as a trouble shooter in its life cycle. These metabolites not only defend the plant but also benefit mankind by offering an array of medicinal activities. Phenols and flavonoids are classes of secondary metabolites, which confer strong antioxidant activity. In present study TPC values up to 166.33 mg/g GAE and TFC values up to 75.11 mg/g QE were observed for methanol and ethyl acetate extract, respectively. Previous studies on A. nilotica also emphasize that it is a rich source of phenols and flavonoids [34,35]. Various solvent extracts of A. nilotica conferred different antioxidant capacities; polar solvent extracts being most effective. Methanol and ethyl acetate were the most effective solvents in this study. Both of these solvents extract out phenols and flavonoids from plant sample [36].

PCA is an important statistical tool for predicting correlation between different parameters in a two dimentional space [39]. In present study PCA analysis reveals the relationship between TPC, TFC and antioxidant activities of six solvent extracts of A. nilotica. Methanol and chloroform extracts showed positive correlation with antioxidant assays while acetone and ethyl acetate extracts showed positive correlation with TPC and TFC values. PCA results corresponded with results observed for antioxidant activities of extracts.

Phytochemical screening is mandatory for standardization of any herbal product. GC-MS analysis is a time efficient tool for phytochemical detection. It confirmed the presence of various classes of compounds in A. nilotica leaf extracts. Presence of these compounds was also confirmed by comparing with literature. Pinitol has been detected in many plant species and showed ion fragment at m/z 73, 147, 217 and 260 [40]. Squalene showed ion fragment at m/z 41, 69 and 81 same as those observed in P. chinense [41]. Presence of cis-9 hexadecenoic acid (m/z 41, 55, 69), 9,12-octadecadieonic acid, methyl ester (m/z 41, 55, 67), 9,12,15-octadecatrieonic acid (m/z 41, 67, 79) was also confirmed by comparing with a validated method [42].

D-pinitol is a carbohydrate that has been previously isolated from A. nilotica and has various medicinal activities like antioxidant, antidiabetic, antiviral, antiinflammatory, anthelminthic [53] and was observed in benzene extract. An active steroid androst-5-en was observed in ethyl acetate extract having antiinflammatory activity that has previously been isolated from A. nilotica [54]. Thus it can be concluded that GC-MS is an effective tool for phytochemical prediction. GC-MS analyses of different solvent extracts of A. nilotica generates phytochemical profile maps of the plant, which can be used as stepping stone in compound isolation studies. Present study reveals the antioxidant potential of A. nilotica leaf extracts and the main phytochemicals responsible for the activity. Further more research is required for analysis of extracts by other analytical techniques, particular compound isolation and their cytotoxic assessment.

We declare that we have no conflict of interest.