Hyperlipidaemia is a common metabolic disorder contributing to morbidity and mortality due to cerebrovascular and cardiovascular diseases. Fibrates and statins are medicines that are extensively used for treatment of patients with elevated level of lipids, especially low-density lipoproteins (LDL), in their plasma [1,2]. However, studies have shown that some fibrates and statins may be associated with liver function abnormalities and, occasionally, rhabdomyolysis [3]. In particular, the high cost and long duration of treatment with statins and fibrates has been a challenge in implementation [4]. We conducted a study of a natural product, Rubus coreanus, which is rich with polyphenols and flavonoids, as an alternative to statin and fibrate treatment for lipid lowering.

Rubus coreanus, belonging to the family Rosaceae, is widely found in South-East Asian countries (Japan, China and the Korean peninsula). Its fruit is popularly known as Bokbunza (BBZ) in South Korea, and is widely used as a traditional medicine [5]. As previously reported, chemical constituents of BBZ include flavonoids, tannins, triterpenosides, anthocyanin and phenolic compounds [6]. It shows antiinflammatory, antifatigue, antigastropathic, antirheumatic, treatment of spermatorrhoea, enuresis, asthma, allergic disease and antioxidant activities [7-11]. Polyphenols found in BBZ, including epicatechin, catechin and proanthocyanidin, have been reported to inhibit catecholamine release in rat adrenal medulla by increasing NO secretion, which might lead to elevation of the cGMP level and prevention of cardiovascular disease [12].

Differences in variety and quantity of active components in many traditional ayurvedic plant extracts are dependent on agronomical and technological factors: For example, race of the plant selected, the degree of fruit ripening and the extraction process utilised [13-16]. Antiinflammatory activity of BBZ was also found to be dependent on the degree of fruit ripening [17]. The objective of the present study was to compare the cholesterol secretion and accumulation efficiency, antioxidant and SOD activity of BBZ during maturation of fruit and also their differences in the above-mentioned activities during extraction using different ethanol fractions.

BBZ extracts extracts were kindly provided by Gochang Black Raspberry Research Institute. Unripe and mature fruits of BBZ were collected from Gochang (Jeollabuk-Do) area in South Korea and were stored at −20°. In brief, 500 g of BBZ fruits were triturated and extracted with 5 l of 0, 25, 50, 75 and 100% ethanol. The extract was filtered and concentrated. The concentrate was lyophilised in a freeze-dryer and stored at −20° before use. The yield of dried extract from starting dried plant material was approximately 5.1%.

Human liver (HepG2) cells were cultured in RPMI 1640 medium supplemented with 2 mM l-glutamine, 10% fetal bovine serum (FBS), and 1% penicillin/ streptomycin. Cells were maintained in a humidified atmosphere at 37°, 5% CO2, and 20% O2. Cells were maintained at 70-80% confluency in serum-depleted conditions for 16 h prior to the experiments.

Cell viability was assessed using the trypan blue exclusion technique and was calculated by dividing the number of nonstained (viable) cells by the total cell count. Briefly, cells were cultured in a 24-well plate and treated with the mentioned agent. After 24 h of culture, all the cells were removed from the wells and suspended in 50 μl of PBS. 10 μl cell of suspension was mixed with 10 μl trypan blue solution (0.4% trypan blue, T8154, Sigma-Aldrich) and placed in a Bright-Line hemocytometer cell-counting chamber. Cells were counted under a light microscope.

Various treatment groups of BBZ extract with different concentrations (1-1000 μg/ml) were added to methanolic solution of DPPH (0.1 mM) according to the method of Blois [18]. After being stirred and left for 20 min at room temperature, the absorbance of DPPH solution was adjusted to 0.700±0.02 with 80% methanol at 517 nm. Fifty microliters of extracts, positive control, or standard antioxidant solution was added to 2.95 ml of methanolic DPPH solution. The mixture was shaken vigorously and was left in the dark at 23° for 30 min. The amount of DPPH remaining was determined at 520 nm, and the radical scavenging activity was determined at 520 nm; radical scavenging was obtained from the following equation:

Cells were incubated in RPMI 1640 medium supplemented with 10% FBS in the absence or presence of various BBZ extracts (5-1000 μg/ml) for 24 h at 37°. Following incubation, cells were washed with ice-cold PBS and then lysed with RIPA buffer. Cellular lipids were extracted by chloroform:methanol extraction solvent (4:2:3, chloroform:methanol: water, v/v/v). Total cholesterol was determined using a commercially available kit (Asan Pharma, South Korea, AM202-2). Cellular protein was assayed using Bradford reagent (Bio-Rad). For measurement of cholesterol released into media, total media from each group was poured into a Vivaspin 15R from Sartorius Stedim Biotech, Germany and centrifuged at 3000 g. Hence, concentrated media were used.

The Bradford method was used for quantification of the protein amount [19]. Data were analysed by one-way analysis of variance using Origin 8 software. Differences between the treated samples were analysed using the individual contrast when the factor consisted of more than two levels. A P value <0.05 was considered significant.

Atherosclerosis is characterised by different features, including cell proliferation, monocyte infiltration, foam cell formation and accumulation of lipids in the artery [20]. Some risk factors associated with atherosclerosis include cigarette smoking, diabetes mellitus, obesity, high dietary fat and elevated plasma level of cholesterol [20]. Different studies and clinical trials have focused on lowering cholesterol levels in order to reduce the risk of atherosclerosis [21]. HepG2, a liver cell line derived from a human hepatoblastoma, has been found to express a wide variety of liver-specific metabolic functions related to cholesterol and triglyceride. Thus, as confluent HepG2 monolayer expresses normal LDL receptors and continues to internalize and metabolize chylomicrons, very low-density lipoproteins (VLDL), LDL, and high-density lipoproteins [22]. HepG2 was selected for use in our investigation of cholesterol level-changing effects of BBZ. As previously mentioned, different extraction ethanol fractions of BBZ have shown different roles in diverse pharmacological actions [8]. Similarly, Yang et al. reported that the degree of fruit-ripening of BBZ affected production of different inflammatory mediators, including nitric oxide (NO), PGE2 and inflammatory cytokines [17]. Treatment with immature berries of BBZ, exerted higher antiinflammatory effects, compared with mature berries. 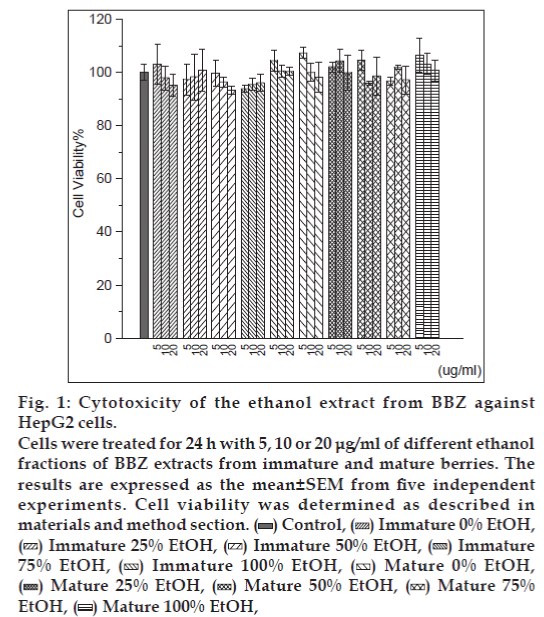 Figure 1: Cytotoxicity of the ethanol extract from BBZ against HepG2 cells.
Cells were treated for 24 h with 5, 10 or 20 μg/ml of different ethanol fractions of BBZ extracts from immature and mature berries. The results are expressed as the mean±SEM from five independent experiments. Cell viability was determined as described in materials and method section. Figure 2: Antioxidative effect induced by different ethanol extract from BBZ against HepG2 cells.
Cells were treated for 24 h with 1, 10, 100 or 1000 μg/ml of various ethanol fractions of BBZ extracts from immature and mature berries. Antioxidative effects were measured in percentage as mentioned in Materials and Methods. The results are expressed as the mean ± SEM from four independent experiments. Butylated hydroxytoluene (BTH) was used as positive control.

Immature BBZ showed higher antioxidant properties than mature BBZ (fig. 2). Based on these results, it is assumed that compound (s) relevant to the preserved antioxidant effects were degraded by a ripening process. This result is consistent with similar results presented by Yang et al. [17]. Yang et al. reported that the proportion of moisture, crude protein, crude fat and fibre were lower in unripe fruits than in ripe fruits. Similarly ellagic acid, one of the bioactive compounds in the fruits of Rubus coreanus, was significantly higher in immature BBZ, compared with mature BBZ. Ellagic acid is a plant-derived polyphenol that has been detected in a wide variety of fruits and nuts, including raspberries, strawberries, walnuts and grapes [23]. From the dietary viewpoint, ellagic acid is of particular interest, as it has been reported to have antioxidant, antiinflammatory, antifibrosis and anticancer properties [23-27]. Assessments of antioxidant activity of natural fruits or herbs are performed either to elucidate the mechanism of their actions or to provide information on antioxidant activity. Free radicals, such as ROS and reactive nitrogen species (RNS), are produced as byproducts in aerobic metabolism, and have been implicated in many diseases, including cancer, atherosclerosis, hypertension, inflammation and ageing [28-30]. Different experiments from BBZ extracts have also shown antiinflammatory, antifatigue, antigastropathic, antirheumatic, treatment of spermatorrhoea, enuresis, asthma, allergic disease and antioxidant activities [7-10]. Apart from this, amongst seventy different types of herbal products evaluated by Ko et al., BBZ showed the highest antioxidant effects [31]. Similarly, antioxidant properties of BBZ in fruits and seeds were found in different amounts according to the method of fermentation of BBZ wine [32,33].

There are two possibilities with regard to the scavenging effect of free radicals. These are chemically free-radical scavenging effects and endogenously free-radical scavenging effects through antioxidant enzyme activations, such as superoxide dismutase (SOD). SOD is one of the enzymatic antioxidants for prevention of oxidative damage in cells [34]. Apart from this, there are other enzymatic and non-enzymatic antioxidants. In this study, a dose of 10 μg/ml induced a significant increase in Mn-SOD and Cu/Zn-SOD expression in a time-dependent manner (fig. 3). Catalase was also shown to be highly expressed in the presence of BBZ. Of particular interest, HO-1 expression was significantly increased after 24 and 36 h of treatment, indicating that antioxidant proteins such as HO-1 activity might be another possible reason for the antioxidant action of BBZ extract.

Figure 3: Western blot expression of HO-1, Cu/Zn-SOD, Mn-SOD and catalase in HepG2 cells treated with 0% ethanol fraction of immature BBZ.
Control group was untreated but rest group cells were treated for different duration 6, 12, 24 and 36 h. Proteins (30 μg) of the total cell lysates were loaded in 8 and 10% SDS–PAGE. Immunoblotting was performed accordingly as mentioned in materials and methods. and β-actin was utilized as loading control

Another interest in this study was the effect of BBZ extract in cholesterol metabolism. We have reported that BBZ extract from different treatment groups caused a marked decrease in cholesterol synthesis with the water fraction of the immature berry, rather than the other treatment group (fig. 4a). Similarly, extracellular cholesterol released by HepG2 cell into the media was also significantly lowered in immature 0% and immature 100% (fig. 4b). The amount of intracellular cholesterol showed a significant decrease, from 34.7±1.6 mg/g of protein to 26.06±2.08 mg/g of protein, in the water extract of immature BBZ (fig. 4a). Other extracts of immature BBZ also showed some intracellular cholesterol lowering activity, compared with mature BBZ fractions; however, it was not as significant as that of the water fraction of BBZ (fig. 4b). This result was consistent with similar results presented by Yang et al., where immature BBZ showed greater antiinflammatory activity than that of mature BBZ [17].

Figure 4: Suppression of intracellular and released cholesterol in HepG2 cells by various ethanol extract of BBZ.
Cells were treated with 10 μg/ml of each extract from immature and mature berries of BBZ for 24 h. (a) Cell pellets were collected, and amount of cholesterol present was measured as described in materials and methods section. (b) Cell culture media was then collected, and the amount of cholesterol released was measured, after concentrating media. Results are expressed as the mean ± SEM from four independent experiments. *P < 0.05 versus control.

BBZ extract showed strong antioxidant properties, along with intracellular and extracellular cholesterol lowering properties in liver cells, which might aid in further elucidation of its role in prevention of atherosclerosis and hyperlipidemia. In this study, there are many limitations; therefore, further study is warranted to confirm the mechanism of lowering cholesterol synthesis and secretion, along with in vivo clarifications.