Lennox-Gastaut syndrome is commonly characterized by a triad of features including multiple seizure types, intellectual disability or regression. The long-term prognosis for Lennox-Gastaut syndrome is generally poor due to uncontrolled seizures. Lennox-Gastaut syndrome type of seizures is epilepsy which is due to abnormal vibrations occurring in seizures. During the time of such abnormal vibrations, both the seizures and the lungs suffer a lack in oxygen content to a considerable extent. This results in prolonged vibrations and loses of nervous control. As a neuro-lung protective strategy, a novel attempt has been made to enrich both seizures and lungs with oxygen content through the support of perfluorodecalin (an excellent oxygen carrier) C10F18 along with an enhancement in the antiepileptic activity by the two chosen antiepileptic drugs carbamazepine and benzodiazepine. The ultraviolet-visible spectrophotometer, fluorescence spectrograph, ultrasonic laser diffraction and scanning electron microscope studies reveals the co-existence of fluorine and drug in the emulsion produced by the sonication of both perfluorodecalin and the drug together. The presence of adequate fluorine and carbon play a catalytic role in ensuring the oxygen content and the antiepileptic activity of drug components.

Lennox-Gastaut type of syndrome is complex epilepsy occurring due to abnormality in seizures. Control of seizures is difficult. An unexpected disharmony in seizures results in epilepsy. Drugs that are most preferred and prescribed for such kind of disease causes adverse side effects. Further any new drug for that matter faces such problems and their effectiveness on the affected seizures is still an unsolved problem[1-10].

Though the valid reasons for the abnormal behavior of seizures, at any particular time, are still a mystery, there seems to be an in adequacy in the supply of oxygen content to both the seizures and lungs. Patients affected by such problems, happens to find it difficult to breath freely, tends to lose the nervous balance. Seizures, at the time of abnormal vibrations, lack in oxygen content and hence the abnormal vibrations prolongs for a longer period of time[11-16].

As a neuro-lung protective strategy, a novel attempt has been made through this paper to apply the phenomenon of oxygen enrichment to both seizures (brain) and lungs simultaneously with the support of perfluorodecalin C10F18 (PFD). At the same time the antiepileptic activity is expected to enhance through the chosen antiepileptic drugs (AEDs) like carbamazepine (CBZ) and benzodiazepine (BDZ). Though valproate, topiramate and lamotrigine are deemed to be first line drugs, CBZ and BDZ are chosen for this study because of their simple structures and could be more adaptive to accommodate such fluorinated compounds.

The incorporation of one or more fluorine atoms into a compound can have a dramatic effect on its chemical and physical properties and fluorinated molecules are of considerable importance in a wide range of industries including pharmaceuticals, agrichemicals, medical imaging, plastics, polymers and electronics. However the synthesis of these important molecules is fundamentally difficult due to the high reactivity of fluorinating agents.

To achieve, either one has to come out with a novel drug containing fluorine compounds and the suitable AEDs, both as single organized structure (in the form of a single crystal) or try to convert both the drug and the PFD into an emulsified mixture and study their predominant contents and assess the particle diameter.

The above said first notion is purely optional and PFD is absolutely neutral by structure. It is quite difficult to break any of its bonds and to make it reactive with either CBZ or BDZ. Though the neutral structure of PFD is not so conducive for a perfect chemical reaction, the basic reason for choosing C10F18 is due to the fact that it is an excellent oxygen carrier[17,18]. Chemically it is highly electronegative. The role of PFD in cardiopulmonary by-pass, lung ventilation, ventilation fluids, cellculture supplement, diagnostic imaging agents, drug formulation and delivery were extensively proved[19-23].

In spite of all these applications their perfect neutral chemical structure is not supportive for any chemical reaction with any compounds. The only effective way to use them is to convert them into an emulsion. There are decent numbers of studies substantiating the excellent oxygen carrying capacity of PFD in emulsified form[24- 31]. Based on the above said facts the second idea is more viable. To achieve these following steps were adopted.

CBZ, BDZ and PFD used as 99 % pure acquired from Sigma-Aldrich. They are used without any further purification. Dimethylformamide (DMF) is used as an effective solvent.

In the first step, 100 mg of CBZ and BDZ each are dissolved in 30 ml of DMF to prepare high concentrated solutions. Ultrasonic laser diffraction (ULD) has been performed to determine the sound velocity through the solution and the compressibility is estimated. The results are tabulated in Table 1. Both the high concentrated solutions were subjected to ultravioletvisible (UV-VIS) spectrographic and fluorescence spectrophotograph studies to analyze the intensity and position of the peaks of the pure CBZ and BDZ drugs exclusively. The study is repeated for very low concentrated solutions too. The reports are presented in fig. 1-fig. 6.

In second step, it involves a continuous process of mixing 10 ml of PFD to the high concentration solution of both CBZ and BDZ each. This mixture has been sonicated at 40 % amplitude and 5 KHz frequency for 5 min at a time interval of 1 min. At most care has been taken to reduce the heat by using dry ice cage. The emulsion formed is preserved at -10° in a cryostat for 5 d. On the 6th d a part of the emulsion is diluted to low concentration. Again UV-VIS, fluorescence and ULD studies are performed. The images are presented in fig. 7- fig. 10 and in Table 1. In third step, the emulsion is placed for slow evaporation process at 313 K. The obtained powder is subjected for scanning electron microscope (SEM) analysis. The results are reported in fig. 11 and fig. 12.

The UV-VIS spectrophotometer is a 20-1950-91- 0029 made with a spectral bandwidth of 2.00 nm is used. The fluorescence spectrophotometer is high sensitive RF-5301-EM made with a scan range of 300.00 nm–500.00 nm. The ULD diffractometer used is of Holmarc-international made. The frequency ranges from 3-10 MHz and the laser wavelength is 6000 nm. The ultrasonic-homogenizer is of PCI international made with a sweep frequency of 1-10 KHz containing a platinum probe. The scanning electron microscopyenergy dispersive x-ray spectroscopy (SEM-EDS) analysis was performed in TESCAN microscope at the operating voltage of 10-20 kV. The images were processed with Vega 3 software system and then probed[32].

The UV-VIS and fluorescence images presented in fig. 1-6 are highly encouraging. The wavelength of pure CBZ and BDZ correlates nicely with standard results though the solvent chosen is DMF. There is a huge difference in the peak height at high concentration as expected[33,34]. 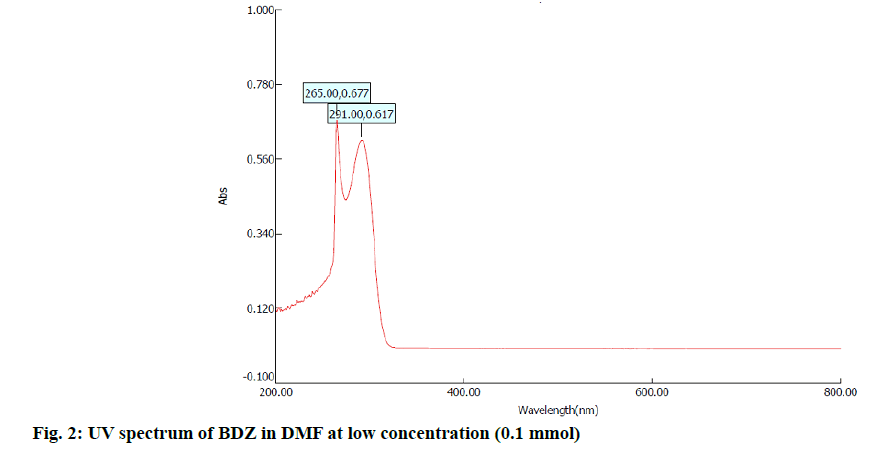 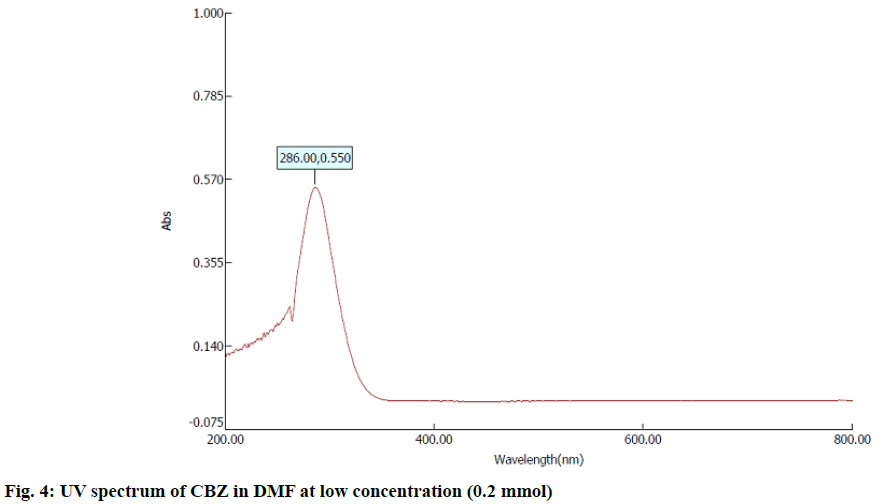 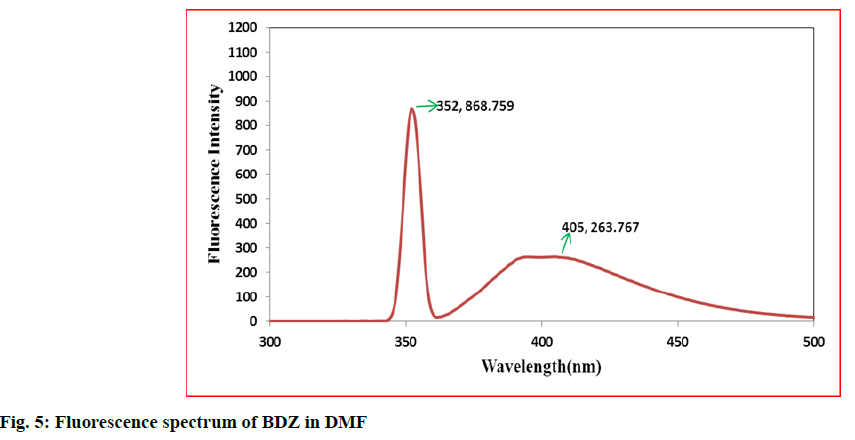 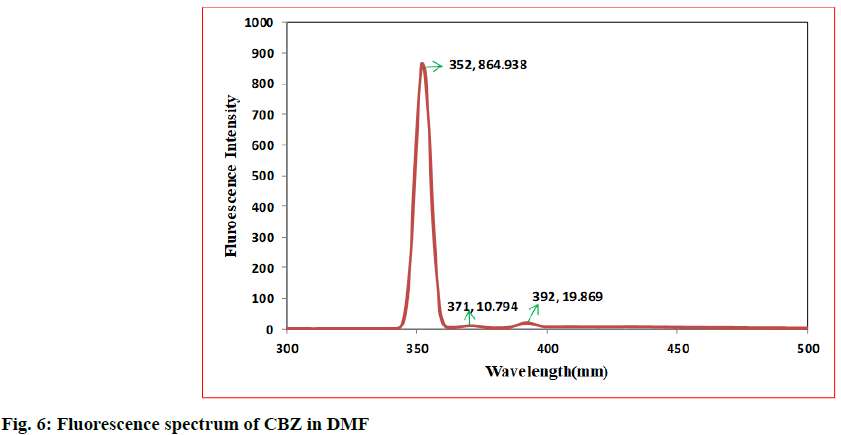 Fig. 7- fig. 10 represents the UV-VIS and fluorescence images of diluted emulsion (sonicated). The pronounced increase in the width of the peak indicates the occupancy of the fluorine and carbon. Further there is a steep raise in the peak height indicating the increase in atomic content of both drug and PFD. Both CBZ and BDZ have got a high tendency to accommodate any fluorine compounds for that matter, C10F18 in this case. The images of fluorescence also back up these features. The neighbouring peak of the principle maximum is a clear indication. 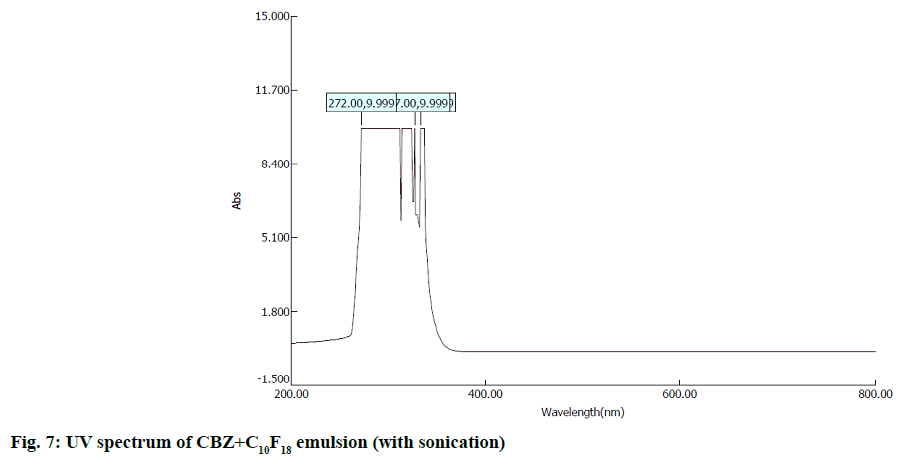 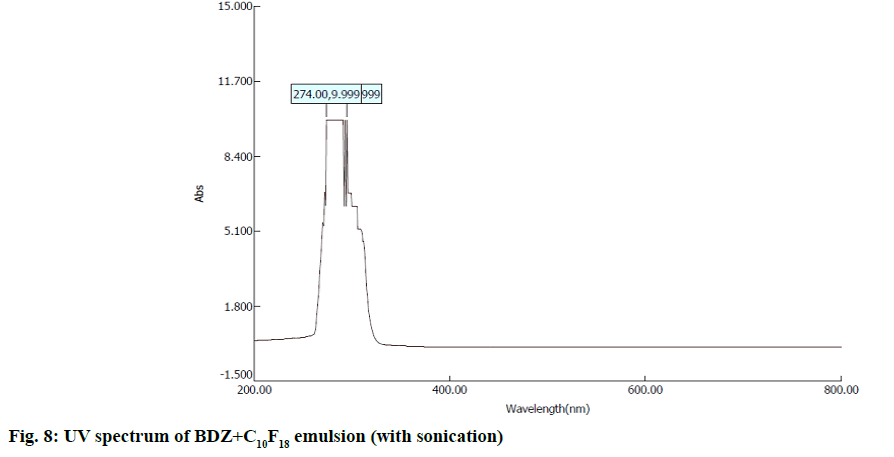 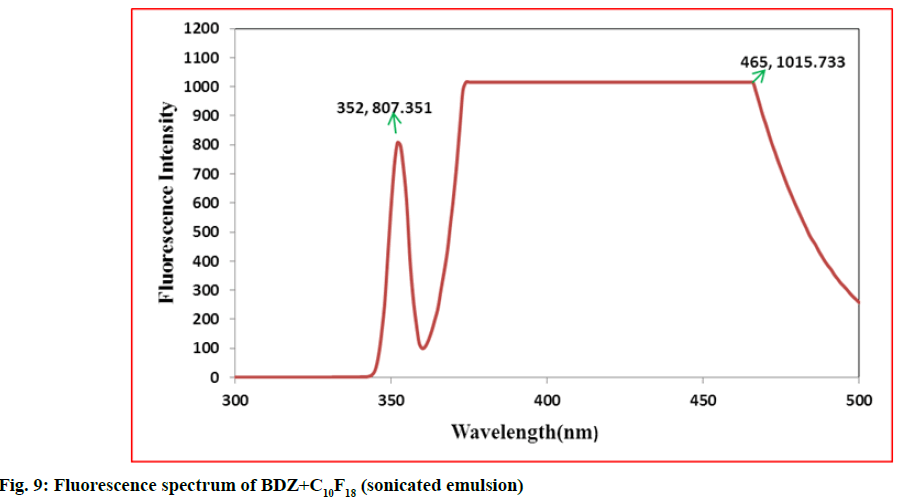 Due to its structure PFD is insoluble in water and DMF. It has lower diffusion coefficient and higher interfacial tensions[35,36]. On the other hand, CBZ and BDZ too are less soluble in water. But they are highly soluble in DMF. Hence when dissolved in DMF they should possess higher diffusion coefficient and lower interfacial tensions. This is in absolute contrast to PFD. This behaviour favours much for the presence of adequate fluorine and the drug together for longer period of time. The high oxygen dissolving capacity of PFD too is well reflected in the constant value of absorption over a long wavelength. The same is the case in fluorescence intensity images too.

ULD study is carried out here. Table 1 presents the ultrasonic velocity and compressibility of PFD exclusively and for the diluted emulsions of both CBZ+PFD and BDZ+PFD. A drastic increase, almost twice, could be observed in the velocity. Since, the compressibility β=1/U2ρ, the value of β has reduced to half, indicating the reduction in molecular interaction energies[37,38]. Hence the feasibility of both the drug and PFD existing together in the form of emulsion for a longer period of time is substantiated.

SEM images represent morphology and confirm the shape and size of the particles. Fig. 11 represents the SEM images of CBZ with PFD emulsion and fig. 12 represents the BDZ with PFD emulsion. In the case of CBZ, the particle diameter ranging from 10.06 nm–52.53 nm (fig. 11) is an excellent evidence for the hydrogen through fluorine, whereas, BDZ tends to bond with PFD to a greater extent. The diameter of 200.68 nm (fig. 12), though it is reasonably high, this could be an indication of greater accumulation of fluorine and carbon atoms along with the components of drug. Probably this could be the expected tendency and result. This supports not only smooth transport behaviour but also the excess oxygen uptake by the system/drug throughout the transvascular route. This behaviour of the drug along with PFD supports neurolung protective strategy. This in turn enhances the activity of the AEDs. All these results presented were to identify the presence of adequate fluorine atoms, carbon content and the components of the drug together in a single emulsion. Studies made seem to support the basic expectation of coexistence of both drug and fluorine atoms together to ensure both the oxygen discharge and the antiepileptic activity.

In conclusion, the expectation of PFD along with any of the AEDs as a single organised crystal with a definite structure is far-fetched. This is because of the basic fact that PFD possess a highly neutral structure. But its high electro negativity helps to co-exist with any chosen antiepileptic drug. The incorporation of one or more fluorine atoms into a compound can have a dramatic effect on its chemical and physical properties and fluorinated molecules are of considerable importance in a wide range of industries including pharmaceuticals, agrichemicals, medical imaging, plastics, polymers and electronics. However the synthesis of these important molecules is fundamentally difficult due to the high reactivity of fluorinating agents. Hence the attempt to come out with a neuro-lung protective strategy, that involves enrichment of both seizures and lungs with oxygen content through the support of PFD (an excellent oxygen carrier) C10F18 (PFD) along with an enhancement in the antiepileptic activity should complement the control of prolonged and harmonic vibrations specifically in Lennox-Gastaut type of seizures.