Crocus sativus, commonly known as saffron, is the most widely represented species of the Crocus genus in Iridaceae family. It has been reported that stigmas of saffron has antiinflammatory [1], antioxidant [2], anticancer and antiplatelet [3] activities. Thus, stigma is generally considered as the most valuable part of saffron, whereas other parts have been ignored. Currently, modern pharmacological research has also demonstrated that the extract of saffron petal possessed immuneenhancing [4], hepatoprotective [5], antidepressant [6], antinociceptive and antiinflammatory [1] effects. Liquid chromatography-diode-array detector-mass spectrometry (LC-DAD-MS) analysis for saffron petal extract indicates that it is rich in flavonoids. Flavonoids are a family of plant-derived phenolic compounds with potentially exploitable activities, including antibacterial activity, synergism with antibiotics, and suppression of bacterial virulence [7]. Numerous studies have proved that various extracts from natural plants possesses antioxidant and antimicrobial activities due to high content of phenolic compounds [8-10]. In fact, the petal and stamen of saffron are normally discarded as by-products generated during the processing of the stigmas. Therefore, in order to increase the overall profitability of saffron, in vitro antimicrobial and free radical scavenging activities of the total flavonoid in petal and stamen of saffron were investigated in this study.

The C. sativus was grown in Anji County, Zhejiang Province, China, and was provided by Lvshengxuan Biotechnology Company. The species was identified and authenticated at the College of Life Sciences, Sichuan University. A voucher specimen was prepared and deposited in the herbarium of Sichuan University. The identification number of the voucher specimen was SZ00682011. The petal and stamen of saffron were dried at 40° and ground to a fine powder. Rutin was purchased from National Institute for the Control of Pharmaceutical and Biological Products in China. All the other reagents used in the study were purchased from Sigma (St. Louis, USA) and were of analytical grade.

The total flavonoid was obtained using the method of ultrasound-assisted extraction. The powder of petal and stamen of saffron (10 g) was extracted by ultrasonic bath (KH-300DB, Kunshan Ultrasound Company, China) with 300 ml of 60% (v/v) ethanol aqueous solution at 25° for 45 min. After filtration, the extract was evaporated with a rotary evaporator (RE-52A, Shanghai Yarong Biochemical Factory, China) at 45° and dissolved in distilled water for purification. The extract of total flavonoid was purified using a column (Φ×L: 20×300 mm) packed with 50 ml of AB-8 macroporous resin. The aqueous solution of extract (1.2 mg/ml, 500 ml) was loaded onto the column at a flow rate of 1.5 bed volume (BV)/h. The adsorbent column was firstly washed with distilled water, and then eluted by 75% (v/v) ethanol aqueous solution at the rate of 2 BV/h. The desorbed solution was collected and evaporated at 45° to afford total flavonoid from petal and stamen of C. sativus (FPSC).

The total flavonoid content was determined using the method of Kuang et al. with some modifications [11]. Briefly, 0.1 ml of appropriately diluted FPSC solution was transferred to a 10 ml colorimetric tube. Then, 3 ml of 1.5% (w/v) aluminum chloride and 2 ml of NaAc- HAc buffer solution (pH=5.5) were added in turn. The final volume was adjusted to 10 ml with distilled water. After standing for 15 min, the absorbance of the mixture was measured at 399 nm against a blank solution. The content of the total flavonoid was expressed as rutin equivalents (RE) according to the calibration curve of rutin.

Aerobic bacteria were grown in nutrient agar medium at 37°. Anaerobic strains were cultured in Wilkins- Chalgren anaerobe broth at 37° in an anaerobic incubator. In addition, fungi were grown in potato dextrose agar medium at 25°. The minimal inhibitory concentration (MIC) was determined by micro dilution method using 96 well plates [12]. A suspension of each microbial strain was prepared and the concentration was about 1.5×106 CFU/ml. The FPSC and reference antibiotics (RA), cephalothin for aerobic, metronidazole for anaerobic and nystatin for fungi were firstly dissolved in sterile distilled water. The solution obtained was serially diluted with relevant broth to concentrations ranging from 1.56 to 200 μg/ml for FPSC and 0.39 to 50 μg/ml for RA. Then, 195 μl of FPSC and RA solution of different concentrations was added in a 96 well plate containing 5 μl of suspension of each microbial strain. The positive control consisted of 200 μl of broth and the negative control consisted of 195 μl of broth and 5 μl of suspension. Then the plate was incubated at 37° (for bacteria) and 28° (for fungi) for 24 h. Microbial growth in each well was determined by observation and comparison with the positive and negative controls. The MIC was the lowest concentration of FPSC and RA, which could prevent visible growth of microbial strains. The minimum microbicidal concentration (MMC) was determined by taking 10 μl of mixture in each well on the relevant agar medium. The lowest concentration that yielded no growth after sub-culturing was taken as the MMC.

The scavenging activity of FPSC on DPPH was measured by the procedure previously reported with some modifications [13]. A 0.2 mM solution of DPPH in methanol was prepared. The FPSC was dissolved in methanol and serially diluted to concentrations ranging from 3.125 to 200 μg/ml. In brief, 100 μl of DPPH was added to 100 μl of FPSC solution of different concentrations. After incubation at 37° for 30 min, the absorbance of the mixture was measured at 517 nm by a microplate reader (SMP500-15859-SBRE, Molecular Devices Company, America). Vitamin C (VC) was used as a positive control. The scavenging activity on DPPH was calculated using the Eqn., radical scavenged= [1− (A1−A2)/A0]×100%, where A0 was the absorbance of DPPH solution only, A1 and A2 were the absorbance of the FPSC solution with and without DPPH.

The scavenging activity of FPSC on ABTS+ was estimated according to the method previously reported with some modifications [14]. ABTS was dissolved in 2.45 mM of potassium persulphate to a concentration of 7 mM, and was then kept in the dark at room temperature for 12~16 h. The ABTS+ solution was diluted with ethanol to an absorbance of 0.7±0.02 at 734 nm before use. The FPSC was dissolved in methanol and serially diluted to concentrations ranging from 3.125 to 200 μg/ml. Briefly, 80 μl of ABTS+ was added to 160 μl of FPSC solution of different concentrations. The mixture was allowed to stand for 6 min at room temperature and the absorbance was measured at 734 nm by a microplate reader. VC was used as a positive control. The scavenging activity on ABTS+ was calculated by the formula in DPPH assay.

Determination of antimicrobial activity was repeated six times. Determination of free radical scavenging activity was carried out in triplicate. The experimental data were expressed as IC50 values representing the concentrations that caused 50% radical loss. Analysis software (SPSS Version 20.0, SPSS Inc., USA) was used to perform ANOVA and a significant difference was checked at P<0.05.

Totally 25 different microorganism strains were selected to identify the antimicrobial activity of FPSC. As shown in Table 1, FPSC displayed a broad antimicrobial spectrum to type culture strains, clinical isolates as well as fungi, and seemed very effective. FPSC exerted a much stronger antimicrobial ability against 3 strains of oral bacteria than other microorganisms. The MIC values for the most susceptible oral strains P. gingivalis ATCC33277, A. actinomycetemcomitans ATCC29522 and F. nucleatum ATCC25586 were merely 3.1~6.3 μg/ml, which were about the same as the values of metronidazole. The antimicrobial effect against B. subtilis ATCC6633, K. pneumoniae ATCC700603, S. maltophilia ATCC24024 and S. dublin (MIC 12.5 μg/ml for all) were also worth mentioning. In addition, the MMC values against all microorganism strains were not over 4 times than MIC in the range of tested concentrations. These results indicated that flavonoids in petal and stamen of saffron were promising for development into a natural antimicrobial drug, especially in oral therapy.

The DPPH and ABTS+ radicals have been widely accepted as a tool for estimating the free radical scavenging activity of antioxidants. As a result, the clearance rates of DPPH and ABTS+ radicals, respectively increased from 8.63 to 85.23% and 27.18 to 97.73%, with the concentrations of FPSC from 3.125 to 200 μg/ml (Figures 1 and 2). And by calculation, the IC50 values of FPSC for eliminating DPPH and ABTS+ were 49.38 and 5.73 μg/ml, whereas those of VC were 8.35 and 8.61 μg/ml. Regarding the degree of free radical scavenging activity, FPSC could be mostly considered as a potent antioxidant, especially against ABTS+. Hence, it was conceivable to improve FPSC into a therapeutic agent in treatment of oxidative stressrelated diseases caused by free radicals. Earlier research has reported the DPPH radical scavenging activity of flavonoids of saffron petals [15]. The IC50 value in that assay was 10.076 mg/ml and much higher than ours, owing to the differences in extraction, purification and origin of the plant material. 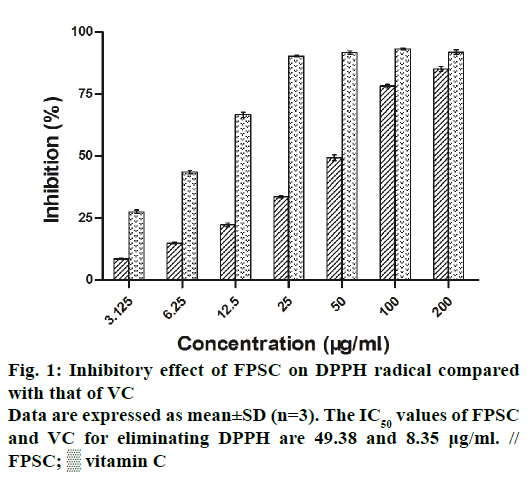 Figure 1: Inhibitory effect of FPSC on DPPH radical compared with that of VC
Data are expressed as mean±SD (n=3). The IC50 values of FPSC and VC for eliminating DPPH are 49.38 and 8.35 μg/ml. // FPSC; 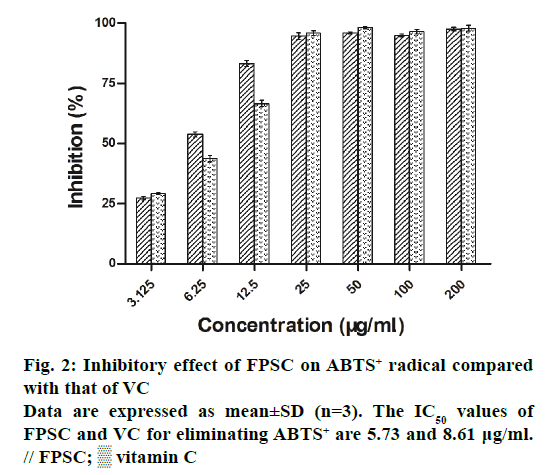 In conclusion, in order to increase the overall profitability of C. sativus, in vitro antimicrobial and antioxidant activities of the total flavonoid in petal and stamen of saffron were investigated. FPSC was found to possess a broad antimicrobial spectrum and exert a very effective antimicrobial activity, especially against 3 strains of oral bacteria. In addition, FPSC also efficaciously inhibited DPPH and ABTS+ radicals at low concentrations. The results obtained in this work indicated that FPSC had potential for development into an antioxidant as well as a clinical drug for treatment of diseases caused by microbes.

The authors wish to acknowledge the support of by Prof. Jie Bai, College of Life Sciences, Sichuan University in identifying the plant material used in this investigation.

All authors declare no conflict of interests.