In vitro antioxidant potential of different parts of Oroxylum indicum: A comparative study

Antioxidants are now standing on the mainstay of the treatment and prevention of several diseases [1-3]. Current research is directed towards fi nding naturally occurring antioxidants particularly of plant origin. Oroxylum indicum Vent. (Bignoniaceae), a rare endangered and threatened medicinal plant widely used traditionally for treating several disorders [4]. The root-bark is used as an astringent and tonic and also in diarrhoea and dysentery. The stem bark is used in acute rheumatism. In the form of an infusion, it is used as a diaphoretic. The fruits are used as carminative and stomachic, while the seeds are used as purgative. The roots are used in dropsy and the leaves are reputed as an emollient. Tender fruits are described as carminative and stomachic [5]. The root of this plant is also one of the important ingredients in most commonly used ayurvedic formulations like dantyadyarista, brahma rasayana, dasamula, amartarista, dhanawantara ghrita, narayana taila [6]. The anti cancer potential of different parts of the plant has already been reported [7,8]. The present study describes a comparative evaluation of different parts of Oroxylum indicum for their in vitro antioxidant activity.

The different parts of the plant i.e. root, root bark, stem, stem bark, leaves and fruits were collected from the forest region of Orissa and identifi ed at the Institute of Materials and Minerals Technology, Bhubaneswar, Orissa. All the plant materials were shade dried, powdered, sieved and successively extracted with petroleum ether and methanol to obtain the extracts. The each of these extracts was concentrated in a rotary evaporator under reduced pressure, giving individual extracts. Ten milligrams of methanol extract of different parts was dissolved in methanol (1 ml) and solution was serially diluted for antioxidant studies. 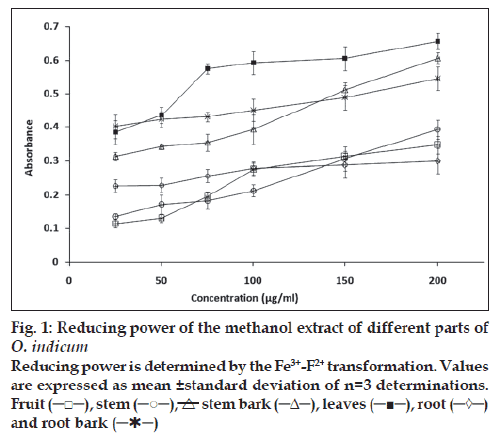 Figure 1: Reducing power of the methanol extract of different parts of O. indicum Reducing power is determined by the Fe3+-F2+ transformation. Values are expressed as mean ± standard deviation of n=3 determinations.

Many of the therapeutic potential of the phenolic compounds can be attributed to its antioxidant activity [15]. The result of this study on in vitro antioxidant activity of different parts of O. indicum reveals that leaves and root bark of the plant have highest radical scavenging activity. Leaves extract was found to contain maximum amount of polyphenolic compounds (124.7 ± 4.36 μg/mg pyrocatechol equivalents) followed by root bark and stem bark extract. Phenolic compounds have been reported to be associated with antioxidative action in biological systems, acting as scavengers of singlet oxygen and free radicals [16]. Leaves extract also showed maximum reductive ability amongst all the extracts. The antioxidant activity of phenolic compounds is mainly due to their redox properties, which can play an important role in absorbing and neutralizing free radicals, quenching singlet and triplet oxygen, or decomposing peroxides [17].