In the present research work mouth dissolving tablets of domperidone were developed with superdisintegrants like crospovidone, croscarmellose sodium and sodium starch glycollate in various concentrations like 3%, 4% and 6% w/w by direct compression method. All formulations were evaluated for physical characteristics of compressed tablets such as weight variation, hardness, friability, content uniformity, in vitro disintegration time, wetting time and in vitro dissolution study. Among all, the formulation F3 (containing 6% w/w concentration of crospovidone) was considered to be the best formulation, having disintegration time of 9 s, wetting time of 15 s and in vitro drug release of 99.22% in 15 min.

Dysphagia is a common problem encountered in all age groups in concern to solid dosage forms, which results in high incidence of non-compliance and ineffective therapy [1]. Recent advances in novel drug delivery systems (NDDS) aim to enhance safety and efficacy of drug molecule by formulating a convenient dosage form for administration and to achieve better patient compliance. To overcome this problem, scientists have developed innovative drug delivery systems known as melt-in-mouth or mouth dissolve (MD) tablets [2]. Advantages of this drug delivery system include administration without water, accuracy of dosage, easy portability, alternative to liquid dosage forms, ideal for pediatric and geriatric patients and rapid onset of action [3-5]. The basic approach used in the development of the fast-dissolving tablet is the use of superdisintegrants like crospovidone, croscarmellose sodium (Ac-Di-Sol), and sodium starch glycollate (Primogel). In the present study these superdisintegrants were evaluated at different concentrations to develop MD tablets and selected the best formulation. Another approach that can be used in developing MD tablets is maximizing pore structure of the tablets. Freeze-drying [6,7] and vacuumdrying[ 8-10] techniques have been tried by researchers to maximize the pore structure of tablet matrix.

Domperidone is widely used antiemetic drug acting by an inhibition of the dopaminergic receptors. Domperidone does not cross blood brain barrier. Domperidone is also effective in gastroparesis, paediatric gastroesophageal reflux (infant vomiting). Domperidone after oral dosing undergoes extensive gastric and hepatic first pass metabolism resulting in low bioavailabality (15%) which therefore, may not minimize the rate of vomiting [11]. Aim of the present study was to develop such a NDDS for domperidone by simple and cost-effective direct compression method. The formulated tablets were characterized for various parameters like weight variation, hardness, friability, content uniformity, in vitro disintegration time, wetting time and in vitro dissolution.

Domperidone was obtained as a gift sample from Dr Reddy’s laboratory, Hyderabad, India. Crospovidone, croscarmellose sodium (Ac-Di-Sol), and sodium starch glycollate (Primogel) were obtained as gift sample from Ranbaxy Laboratories Limited, Gurgaon, India. All other reagents and chemicals used were of analytical grade.

Domperidone, sodium saccharin and superdisintegrants were passed through 30 mesh and mixed geometrically with 30 mesh passed mannitol and microcrystalline cellulose. Magnesium stearate was passed through 40 mesh and mixed with this mixture. Different formulations were developed using superdisintegrants at 3, 4 and 6% w/w concentrations. The lubricated blends were compressed into MD tablets using 8 mm round, flat faced beveled edge punches to get tablet of 200 mg weight using Tablet Punching Machine (Cadmach, Single punch machine). The compositions of the different formulations are presented in Table 1.

For assessing weight variation twenty tablets were selected at random and assessed individually using an Analytical balance (Adair Dutta, AD-50B, Kolkata). The individual weights were compared with the average weight for determination of weight variation [12]. Hardness and friability [13] of the tablets were determined by using a Monsanto hardness tester and a Roche friabilator, respectively. For content uniformity test, 10 tablets were weighed and powdered, a quantity of powder (200 mg) was dissolved with 0.1N HCl and the solution was filtered through 0.45 μ membrane (Nunc, New Delhi, India). The absorbance was measured at 281 nm after suitable dilution. The in vitro disintegration test [14] was carried out on six tablets using USP disintegration test apparatus with distilled water at 37±0.5º and the time in seconds taken for complete disintegration of the tablet with no palpable mass remaining in the apparatus was measured in seconds. For determination of wetting time [15], a piece of tissue paper folded twice was placed in a small 5 cm diameter Petri dish containing 6 ml of water. A tablet was placed on the paper and the time required for complete wetting was measured. The results are shown in Table 2.

The in vitro dissolution study of the formulated mouth dissolving tablets of domperidone were studied in USP apparatus type II (Tab Machines, Mumbai, India) employing a paddle stirrer at 50 rpm using 900 ml of 0.1N HCl at 37±0.5° as dissolution medium. Aliquots of dissolution medium (9 ml) were withdrawn at specific intervals of time and replaced with fresh dissolution medium at 2, 4, 6, 10 and 15 min. The samples were filtered through a 0.45 μ membrane filter. Absorbance of these solutions was measured at 281 nm using Elico-SL159 UV/Vis spectrophotometer. The percentage of drug release was calculated using an equation obtained from a standard curve and results are presented in Table 2.

The present investigation was undertaken to fabricate and evaluate mouth dissolving tablets of domperidone by the direct compression method. Superdisintegrants at different concentration levels (3, 4 and 6% w/w) were used to assist disintegration. All the formulations exhibited white color, odorless, convex in shape with smooth surface. Weight variation was found within the specification of the IP limits. Average weight of all formulations was found in the range of 198- 204 mg. Hardness and friability of all formulations was within acceptable limits. Hardness of tablets prepared by direct compression was 3.2 to 3.45 kg/ cm2. The friability of all formulations was found to be less than 1.0% and hence the tablets with lower friability may not break during handling on machines and or shipping. The content uniformity of all the formulations was found in the range of 93-98%. In vitro disintegration time is very important for mouth dissolving tablets which is desired to be less than 60 s. The rapid disintegration may be due to the rapid uptake of water from the medium, swelling, burst effect and thus promoting bioavailability. The in vitro disintegration time was rapid with Crospovidone i.e 09 s and delayed with sodium starch glycollate i.e 40 s and the order was Crospovidone<Ac-Di-Sol<Primogel. This finding is in agreement with results obtained from wetting time, since primogel swells with more gelling than Ac-Di-Sol and Crospovidone, which extend disintegration time as a result. As the concentration of superdisintegrants in the formulations increased the disintegration time was found to decrease. Wetting time is used as an indicator from the ease of the tablet disintegration in buccal cavity. It was observed that wetting time of tablets was in the range of 15 to 62 s. It was observed that type of the disintegrant affected the wetting of the tablets. On comparing superdisintegrants the formulation containing primogel take more wetting time than Ac-Di-Sol and Crospovidone. Wetting is related to the inner structure of the tablets and hydrophobicity of the components. This may be due to the fact that primogel is disintegrated by swelling mechanism leading to longer wetting time. Crosprovidone and Ac-Di-Sol perform their disintegrating action by wicking through capillary action and fibrous structure, respectively with minimum gelling [16].

In vitro dissolution studies of various formulations at different time intervals are reported in Table 2 and (fig. 1). The Crospovidone formulation showed the maximum dissolution rate of 99.22% drug release in 15 min. Croscarmellose sodium containing tablets released 97.15% of the drug in 15 min and Sodium starch glycollate formulations released 94.33% of the drug in 15 min. This shows that the effectiveness of superdisintegrants was in the order of Crospovidone > croscarmellose sodium > Sodium starch glycollate. From the overall observations, formulation F3 containing 6% w/w Crospovidone was considered to be the best formulation, comparision to all other formulation used in the management of motion sickness. 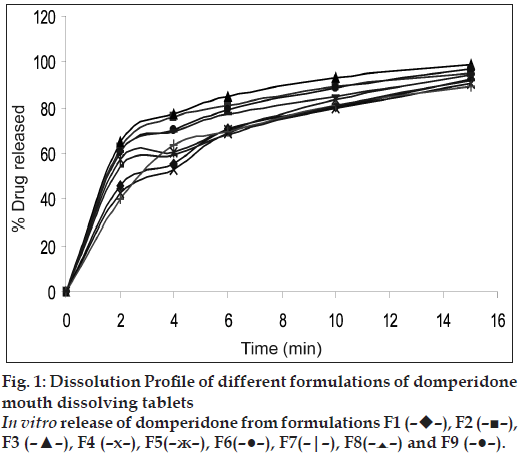 The authors are grateful to Dr Reddy’s laboratory for providing gift samples of domperidone and Ranbaxy laboratories limited (RLL) for superdisintegrants like Crospovidone, croscarmellose sodium and sodium starch glycollate, respectively.