Department of Pharmaceutics, the Erode College of Pharmacy, Erode-638 112, India

The aim of the present study was to prepare and characterize controlled-release matrix tablets of zidovudine using hydrophilic HPMC K4 M or Carbopol 934 alone or in combination with hydrophobic ethyl cellulose. Release kinetics was evaluated by using USP XXIV dissolution apparatus No.2 (paddle) type. Scanning electron microscopy was used to visualize the effect of dissolution medium on matrix tablet surface. The in vitro results of controlled -release zidovudine tablets were compared with conventional marketed tablet Zidovir. The in vitro drug release study revealed that HPMC K4 M or Carbopol 934 preparation was able to sustain the drug release near to 6 hours. Combining HPMC K4 M or Carbopol 934 with ethyl cellulose sustained the drug release for nearly 12 h. The in vitro evaluation showed that the drug release may be by diffusion along with erosion. Results suggest that the developed controlled-release tablets of zidovudine could perform therapeutically better than marketed dosage forms, leading to improve efficacy, controlling the release and better patient compliance.

HIV (Human Immunodeficiency Virus) is a virus that causes AIDS (Acquired Immunodeficiency Syndrome), a health condition in which a person is affected by a series of diseases because of poor immunity. It is crucial for the success of AIDS therapy to maintain the drug concentration consistently above its target antiretroviral concentration throughout the course of the treatment [1]

Zidovudine (AZT) (3’-azido-3’-deoxythymidine) is a thymidine analogue in which the 3- hydroxyl group is replaced by an azido(-N3) group. It is the first antiHIV compound approved for clinical use in the treatment of AIDS either alone or in combination with other antiviral agents. The main limitation to therapeutic effectiveness of AZT is its dose-dependent hematological toxicity, low therapeutic index, short biological half-life, and poor bioavailability. It is rapidly absorbed from the gastrointestinal tract (GIT) exhibiting a peak plasma concentration of 1.27 µM. The biological half-life of AZT-triphosphate is 3-4 h, thus necessitating frequent administration (3 to times a day) to maintain constant therapeutic drug levels. Since its antiviral effect is time dependent, an adequate zero-order delivery of AZT is desired for maintaining antiAIDS effect and avoiding the toxic side effects like granulocytopenia and severe anemias usually associated with excessive plasma level of AZT immediately after intravenous or oral administration.

AZT is completely and rapidly absorbed throughout the GI Tract with a bioavailability of 65%. As the drug is freely soluble at all pH, judicious selection of release-retarding excipients is necessary for achieving constant in vivo release. Number of studies shows the use of hydrophilic matrices to formulate the controlled release dosage forms of different drugs [2-9]. Because of their simplicity and cost-effectiveness, hydrophilic gel matrix tablets are widely used for oral controlled release dosage forms. Hydrophilic polymers form a gel like structure around the tablet core which controls the drug release. The hydrophilic polymers, HPMC K4 M or Carbopol 934 [10] selected in the present study provide pH-independent drug release to oral dosage forms that can be used for formulating the sustained-release dosage forms. However, the use of hydrophilic polymer alone for controlling the drug release of highly water soluble drugs is restricted due to rapid diffusion of the dissolved drug through the hydrophilic gel layer. Use of hydrophobic polymers will retard the drug release. So in the present investigation, an attempt has been made to formulate the controlled – release matrix tablets of AZT using hydrophilic matrix material (HPMC K4 M or Carbopol 934) in combination with hydrophobic ethyl cellulose [4,11,12].

AZT was obtained as a gift sample from Aurobindo Pharma Ltd., (Hyderabad, India). HPMC K4 M, Carbopol 934 and ethyl cellulose were purchased from Merck Chemicals (Mumbai). All other chemicals and reagents used in the study were of analytical grade and were used as procured.

Matrix tablets were prepared by direct compression technique using micro crystalline cellulose as directly compressible vehicle and magnesium stearate as lubricant. All the ingredients were sieved through 40 mesh screen and mixed with other ingredients and the powder mixture was compressed using 7 mm round, flat and plain punches on multiple punch rotary tablet machine. In total, 10 formulations containing different amounts of HPMC K4 M (F1, F2, F3), Carbopol 934 (F4, F5, F6) and combination of HPMC K4 M or Carbopol 934 with ethyl cellulose (F7, F8, F9, F10) were prepared and their formulae are presented in Table 1.

The in vitro dissolution studies were performed using USP XXIV dissolution apparatus No.2 (paddle) type at 50 rpm. The dissolution medium consisted of 0.1 N hydrochloric acid for first 2 h and for subsequent 10 h in phosphate buffer pH 7.4 (900 ml), maintained at 37±0.5°. The release studies were conducted in triplicate. Aliquots of samples (5 ml) were withdrawn at specific time intervals and drug content was determined spectrophotometrically at 265.6 nm. The in vitro release data obtained was treated to zero order rate equation, first order rate equation, Higuchi’s equation[8] (Q = Kt1/2), to know precisely the mechanism of drug release from the matrix tablet. 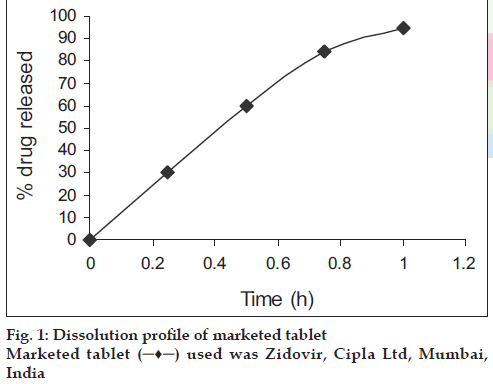 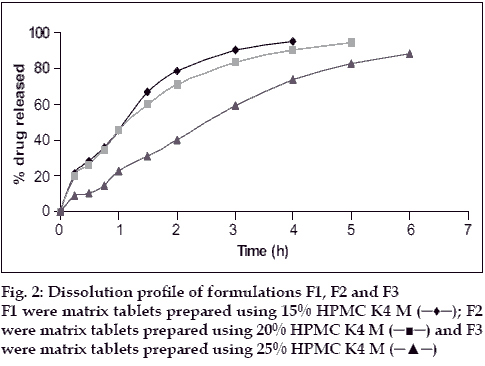 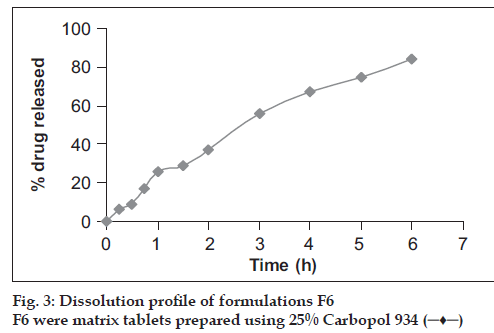 Therefore, in the next batch of tablets, to control the initial burst release ethyl cellulose was included in the matrix in the ratio of 1:1 along with HPMC K4 M (F7) or Carbopol 934 (F8) which resulted in extending the drug release for a period of 12 h indicating fair uniform drug release through out the dissolution period (fig. 3). This may be due to a more rigid complex formed by hydrophilic polymers (HPMC K4 M and Carbopol 934) in presence of ethyl cellulose, which helped in retaining the drug in the matrix and did not allow rapid diffusion of soluble drug from the matrix. AZT has a very narrow (0.4–4.0 µM) therapeutic index. The commercially available marketed tablet produces initial high plasma concentration because of the absence of the release retardants, which may cause unwanted toxic effects like bone marrow depression that sometimes leads to withdrawal of drug therapy. Hence, it is essential to maintain the plasma level within the therapeutic index to eliminate toxic effects. The tablets formulated using combination of HPMC K4 M or Carbopol 934 and ethyl cellulose did not show any burst release indicating reduced possibility of dose dependent toxicity. The hydrophobic nature of ethyl cellulose seems to have contributed toward reduction in the penetration of the solvent molecules into the matrix. 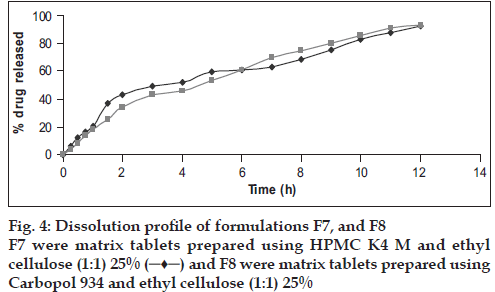 The swelling of tablets with HPMC K4 M or Carbopol 934 alone or in combination with ethyl cellulose can be attributed to the inherent property of hydrophilic polymers when in contact with aqueous dissolution fluids.

SEM study further confirmed both diffusion and erosion mechanisms to be operative during drug release from the optimized batch of matrix tablet (F7 and F8). SEM photomicrograph of the matrix tablet taken at different time intervals after the dissolution experiment showed that matrix was intact and pores had formed throughout the matrix (fig. 5). SEM photomicrographs of tablet surface at different time intervals also showed that erosion of matrix increased with respect to time indicated by the photomicrographs at 2, 4 and 8 h revealing pores with increasing diameter. These photomicrograph also revealed the formation of gelling structure indicating the possibility of swelling of matrix tablets (figs. 6 and 7). Hence, the formation of both pores and gelling structure on tablet surface indicates the involvement of both erosion and diffusion mechanisms to be responsible for sustaining the release of AZT from formulated matrix tablets.

Overall it can be concluded that, the presence of ethyl cellulose as well as the% of total matrix material significantly influenced the release rate of drug. The tablets with 25% of matrix material (1:1 ratio of HPMC K4 M or Carbopol 934 and ethyl cellulose) gave satisfactory results on the formulation of controlled release dosage form of AZT. Further, the controlled release of AZT at specific ratios of hydrophilic and hydrophobic polymers may be confirmed by continuing the studies for in vivo release.