In vivo pharmacokinetic studies of prodrugs of ibuprofen

In vivo pharmacokinetic studies of N-Mannich base derivatives of ibuprofenamide as prodrugs were performed on rabbits. Ibuprofen and both the prodrugs (IBMB-M and IBMB-P) were administered orally and at different time intervals blood samples were collected and assayed for ibuprofen and ibuprofenamide by HPLC method. From the plasma concentration-time profile; (C p ) max , t max , AUC and the time required to achieve minimum effective concentration were calculated. N-Mannich base prodrugs first get hydrolyzed to ibuprofenamide which in turn gets hydrolyzed to ibuprofen by the enzyme amidase. The (C p ) max and AUC values of IBMB-M were found to be more compared to IBMB-P. In both the cases ibuprofen started appearing after 2 h and it required minimum 4 h to get the ibuprofen in therapeutic range. Both the prodrugs released ibuprofen slowly which gave sustained effect. IBMB-M provided ibuprofen in therapeutic range for 48 h and IBMB-P for 24 h.

The non-steroidal antiinß ammatory agents have major drawbacks of causing gastrointestinal ulcerogenicity. The prodrug approach was used to get a safer NSAID, where the drug containing –COOH or –OH group is converted to prodrug. The prodrugs of ibuprofen were prepared as N-Mannich base derivatives of ibuprofenamide using either morpholine or piperidine as amine component. Two prodrugs of ibuprofen were synthesized. These were, N-(morpholinomethyl) ibuprofenamide hydrochloride (IBMB-M) and N- (piperidinomethyl) ibuprofenamide hydrochloride (IBMB-P) [1]. The in vitro kinetic studies of the prodrugs were performed in aqueous buffers at different pH values in simulated gastric and intestinal fluids and in human plasma at 37°. The results showed that hydrolysis took place in two steps. First the N-Mannich base was hydrolyzed to ibuprofenamide which was pH-dependent and then ibuprofenamide was converted to ibuprofen which was enzymatically controlled [2].

The prodrug behaves differently under in vitro and in vivo conditions because many biological factors play an important role in bioavailability and release rate of drug from prodrug during in vivo studies. The ideal way to observe the appearance of drug from prodrug is by actual studies in humans. But as the prodrugs are new drugs, it is not feasible to perform in vivo studies directly on humans [3-7]. Rabbit was selected as an animal model to study the release pattern of prodrug as there are some physiological similarities of rabbits with humans. The purpose of this study is to determine the availability of drug ibuprofen and ibuprofenamide from prodrugs IBMB-M and IBMB-P; and the time required to achieve minimum effective concentration.

Four adult rabbits of either sex each weighing 3.0-3.5 kg were used in a cross over study. The protocol of the cross-over study was approved by the IAEC. Rabbits were fasted overnight but water was allowed ad libitum. Before administering the dosage form, control blood samples were obtained from marginal ear vein of all the rabbits. The ibuprofen and IBMB-P were given in suspension form (2% methylcellulose). IBMB-M was given in solution form. The drug ibuprofen (25 mg/kg) and molar equivalent of prodrug (equivalent to 25 mg/kg ibuprofen) were administered orally via Ryle′s tube (intubation tube). After drug administration, 2 ml of blood samples were collected at time intervals in the test tube containing heparin. The plasma fractions were then assayed for ibuprofen and ibuprofenamide. Graphs of plasma concentration (µg/ml) of ibuprofenamide/ibuprofen vs. time(h) were plotted (figs. 1-3). 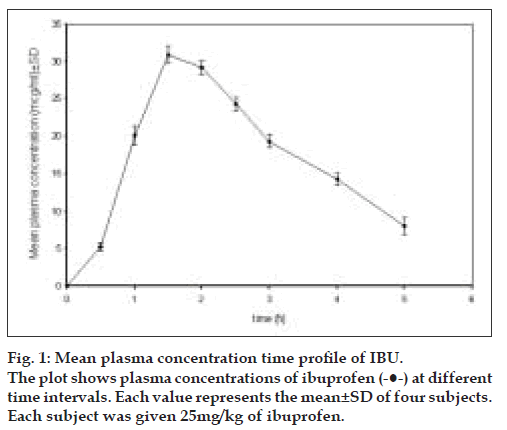 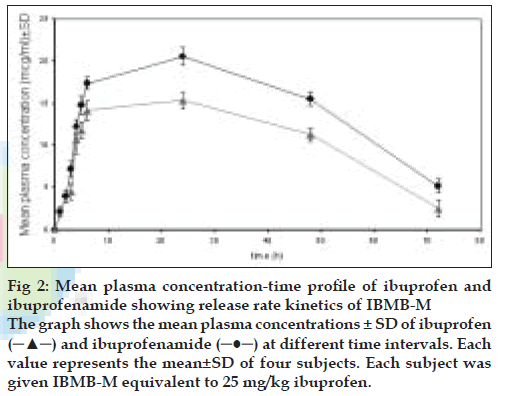 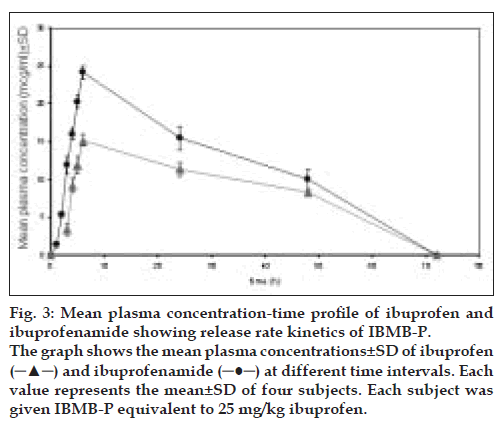 For the comparison purpose ibuprofen (25 mg/kg) was administered orally to the rabbits in the suspension form, and (Cp)max and tmax was determined. The (Cp)max was found to be 30.91 µg/ml and tmax was found to be 1.5 h. After 2 h, the plasma level of ibuprofen started declining. Molar equivalent of IBMB-M to 25 mg/kg of ibuprofen was administered orally to rabbits in solution form, as IBMB-M is a water-soluble prodrug.

IBMB-P was given to rabbits in suspension form, so dissolution rate was also one of the factors. But from previous studies it is known that at acidic pH the dissolution rate of IBMB-P is high, so dissolution rate should not affect the absorption of prodrug. From release rate data, it was found that IBMBP was hydrolyzed to IBA. After 1 h, the plasma concentration of IBA was found to be 1.42 µg/ml and after six hours 24.22 µg/ml.

From the previous kinetic studies it was found that the hydrolysis rate of IBMB-P was less in acidic pH but at pH 7.4 of plasma, the hydrolysis rate was high. So in the plasma, (Cp)max 24.22 µg/ml of IBA was achieved after 6 h. After 24 h, the concentration was little less, 19.5 µg/ml and after 48 h it was found to be 10 µg/ml. But after 72 h, no IBA could be detected.

From these results, we can conclude that both the prodrugs release ibuprofen slowly, which gave sustained effect. Ibuprofen started appearing after 2 h and it required at least 4 h to get ibuprofen in the therapeutic range.