Influence of circulation system on estimation of absorption and elimination constant after Per oral drug administration: A reanalysis

This study aimed to identify the cause of atypical shape of measured concentration-time profile in the peak area by one compartment open model with a lag time (Bateman function with a lag) after single dose oral administration of drug published in "Pharmacokinetic and Pharmacodynamic Data Analysis: Concepts and Application" by Gabrielsson and Weiner (1997) and two concentration profiles after frequent sampling oral glucose tolerance test. Following the oral administration of 100 μg of substance A to human volunteer, frequent sampling was carried out and concentration-time profiles were obtained. Our hemodynamic circulatory structural model capable of parameters estimation of circulation and gastrointestinal subsystem to explain the plateau within the interval 40-100 min (substance A) and 15-30 min (glucose) of the measured concentration-time profile was developed. The mean residence time, the rate constants of absorption and elimination parameters of our model were calculated. Comparing to the Bateman function, our results demonstrate better approximation of the substance A and glucose concentration-time profile and estimation of absorption rate constant by our structural model. Obtained model results indicate that the atypical shape of measured concentration-time profile of single dose oral administration of drug was probably caused by the gastrointestinal and circulation system with deep compartment. This applies to the substances with high coefficient of absorption.

The main inspiration for creation of this work was from the book by Gabrielsson and Weiner [1]. Authors of chapter “PK 2 - One compartment oral data” (pages 333-340) aimed at the modeling of oral administered substance A using one compartment model presented first order input model known as Bateman function with a lag time [2-6]. Parameter estimation by WinNonlin version 1.1 (Scientific Consulting Inc., Apex, NC) were performed. 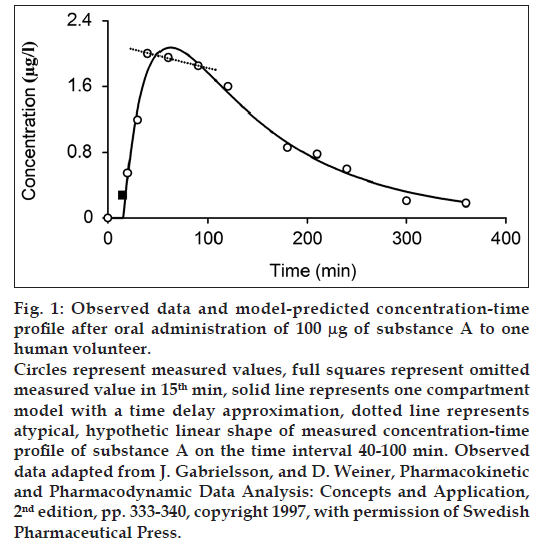 Fig 1: Observed data and model-predicted concentration-time profile after oral administration of 100 μg of substance A to one human volunteer.

A human volunteer was given a single oral dose comprising 100 μg of substance A. Consequently, the frequent sampling to obtain the concentration-time data was done at 10, 15, 20, 30, 40, 60, 90, 120, 180, 210, 240, 300, and 360 min after substance A administration [1]. Two other human volunteers (one male and one female) were given 75 g of anhydrous glucose [13] in 250 ml water solution within 1-2 min at time zero. Approval of the study protocol was obtained from the Ethic Committee of the Institute of Experimental Endocrinology of Slovak Academy of Sciences [13]. Frequent sampling oral glucose tolerance test was performed by the criteria of Expert Committee on Diagnosis and Classification of Diabetes Mellitus [14]. The blood samples were collected at 15 min before the glucose was administered and at 8, 15, 22, 30, 45, 60, 90, 120, 140, 160, and 180 min after the glucose was administered. Determination of glucose plasma concentrations was carried out by using the glucose oxidize method (Boehringer Manheim, Germany) [13].

Inclusion of the GI system to the hemodynamic circulatory model (fig. 2) gives the option to analyze the plateau phenomena on the measured concentration-time profile shown in fig. 1. The scheme of the proposed structural model, with the oral substance dose D as input and the substance blood concentration in the sampling subsystem CS as output, includes the cardiopulmonary subsystem CP, the portal subsystem P, the liver subsystem L, the GI subsystem, the other subsystems O and the sampling subsystem S. Assuming that all of the significant subsystems shown in fig. 2 within the range of measured concentrations formalized behave as linear dynamic systems, then ith subsystem can be described by the transfer function Hi presented the general mathematical model of the subsystem as well-stirred model with time delay: 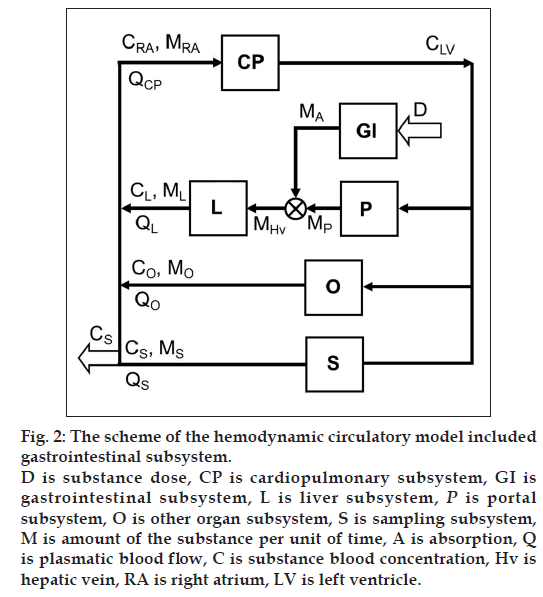 The definition and the transfer function of the GI subsystem comprising absorption part A and gastric empting (GE) (fig. 3) and respecting the mass balance is defined as

where D(t) = Dose ·(t), δ(t) is Dirac function, MA is absorbed amount per unit of time in GI subsystem in the first-pass metabolism of the drug, TA is mean residence time of the absorption subsystem, F is fraction and τ is time delay of the subsystem.

For substance blood concentration in the right atrium CRA is valid

where QCP is plasmatic blood flow through CP system expressed as follows:

The definitions and transfer functions of the elementary subsystems, respecting the mass balance, are considered as follows equations:

Regarding the CP subsystem is valid

Regarding the portal subsystem P is valid

where MP, gP, QP, GP and TP are the substance amount per unit of time, the attenuation, the plasmatic blood flow, the gain and the time constant, respectively, related to the portal subsystem.

Regarding the liver subsystem L is valid

Regarding the other organ subsystem O is valid

where MO, gO, QO, GO, τO and TO are the substance amount per unit of time, the attenuation, the plasmatic blood flow, the gain, the time delay and the time constant, respectively, related to the other organ subsystem.

For the mean residence time of the drug in the whole body (MRTW) after the oral administration is valid following equation:

where TA is mean residence time of the absorption subsystem, F is absorbed fraction and τ is a time delay of the subsystem.

Mean residence time of the substance of the circulation system (MRTCIRC) is calculated according to:

The absorption rate constant ka is expressed as

where TA is mean residence time of the absorption subsystem.

The elimination rate constant kel is expressed as

where CS is the concentration of the substance in the sampling subsystem S.

All model calculation and parameter estimation using the Clinical Trials DataBase software [15] were performed. Employing the parameters of the developed structural mathematical model (figs. 2 and 3), the vector λ of estimated parameters was determined as follows:

The final outcome of the processed data obtained from the human volunteer is presented in fig. 4 (substance A), 5-6 (glucose) and Tables 1-3. 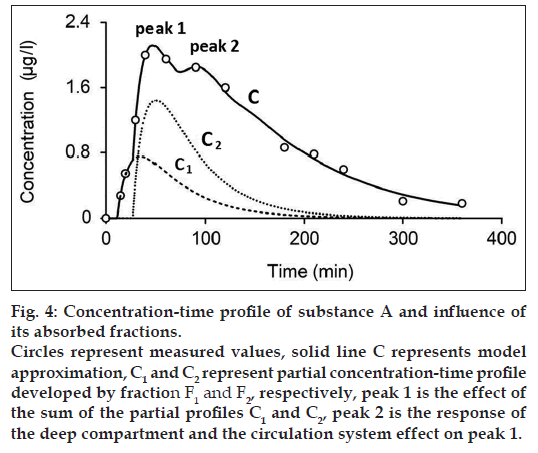 Fig 4: Concentration-time profile of substance A and influence of its absorbed fractions. 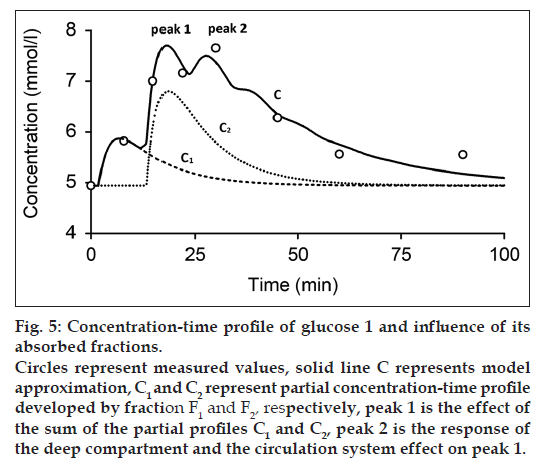 Fig 5: Concentration-time profile of glucose 1 and influence of its absorbed fractions.

The model estimated parameters of the GI and the circulation subsystems are listed in Tables 1 and 2, respectively. The model parameters of the GI subsystem include absorbed fractions F1 and F2, time delays τ1 and τ2, mean residence time of the absorption subsystem TA and MRTGI. Obtained results of the model approximation show approximately twice more value of the second fraction contrary to the first fraction (Table 1).

The comparison between derived or estimated parameters by our developed hemodynamic circulatory model and parameters estimated by using the Bateman function is listed in Table 3.

Our work as a reanalysis of the study of Gabrielsson and Weiner [1], was focused on the identification of the system defined by the oral administered substance A and frequent sampling oral glucose tolerance test data as the input and the measured concentration-time profile as the output by hemodynamic circulatory structural model included GI subsystem. This is for the substances with high coefficient of absorption.

While one compartment open model (Bateman function) was not capable of fitting the measured data within the time interval 40-100 min (fig. 1) in case of substance A and the time interval 15-30 min in case of glucose, our model approximation presents a good fitting of the measured values within this interval (figs. 4-6). The shape of final concentration-time profile C as the result of the parameters estimation by our structural model is characterized by the individual peaks 1 and 2. Regarding obtained results of our modeling, the peak 1 is expressed by the sum of the partial concentration-time profiles C1 and C2 related to the individual absorbed fractions F1 and F2, respectively, which suggest the effect of the GI system. The second peak 2 presents the influence mainly of the circulation system included the deep compartment to the final concentration-time profile of substance A in the observed human subject. In Table 1, the first fraction F1 (34.425% - substance A) and (33% - glucose 1) was absorbed in the small intestine with the time delay of 11.579 min (substance A) and 1.731 min (glucose 1) compared to the second absorbed fraction F2 (65.575% - substance A) and (66% - glucose 1) with the time delay of 27.262 min (substance A) and 13.398 min (glucose 1). Glucose 2 had only one fraction with time delay of 7.751 min. 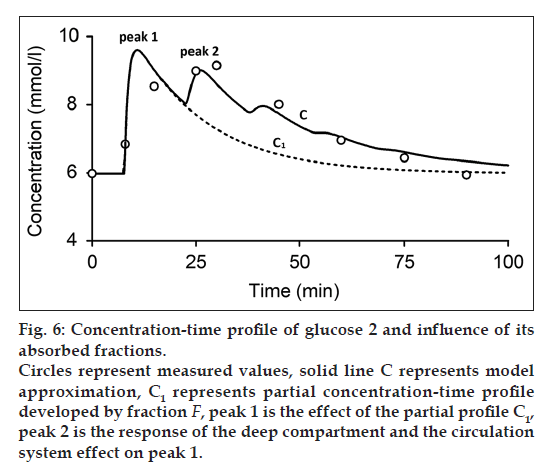 Fig 6: Concentration-time profile of glucose 2 and influence of its absorbed fractions.

Table 3 shows to the comparison between the individual absorption ka and elimination kel rate constants. Absorption rate constant ka* according to study [1] of 0.043 l/min appears 2 times higher values in comparison with our estimated value ka of 0.022 l/min. The elimination rate constant kel* (0.009 l/min) according to study [1] presents similar values compared to calculations (Eq. 2) related to our developed structural model (0.008 l/min and 0.295 l/min, respectively). The value of mean residence time MRTW of the whole body calculated by our structural model was 130.646 min (substance A), 38.756 min (glucose 1) and 43.067 (glucose 2). Model estimated value of ka for glucose 1 is 0.35, which is similar to the value estimated by Bateman function (0.47) and for glucose 2 is 0.922 is 3 times higher as compared to the value estimated by using Bateman function (0.365). Model estimated values ke for glucose 1 and 2 are 0.41 and 0.39, respectively and they are very similar to the values estimated by using Bateman function (Table 2).

In summary, obtained model results show a good approximation of the final concentration-time profile of substance A and glucose by our hemodynamic circulatory structural model compared to the Bateman function. Our work presents the validation of the hypothesis that the atypical shape of measured concentration-time profile of oral administered substance A and glucose single dose was due to the effect of the GI subsystem and the circulation system included the deep compartment.

This work was supported by Competence Centre for SMART Technologies for Electronics and Informatics Systems and Services, ITMS 26240220072, funded by the Research and Development Operational Programme from the ERDF.