Influence of phenological stages on yield and quality of oregano (Origanum vulgare l.) under the agroclimatic condition of doon valley (uttarakhand)

Origanum L. (Lamiaceae), a small genus of perennial and shrubby herb which is distributed in the Mediterranean region and tropical Asia [1]. The genus includes some commercially important culinary herbs, including oregano (Origanum vulgare L.) and Marjoram (Origanum majorana Moench; syn. Majorana hortensis L.), which are extensively used for flavoring food products and alcoholic beverages [2,3]. In India, the genus is represented by a single species, O. vulgare, generally found in subtemperate and temperate Himalaya [4], whereas, the other important species, O. majorana is exotic and cultivated in Indian gardens [5].

The chemical composition of oregano oil is very variable in India [6‑10]. The chemo varieties and the environmental conditions caused to this fact. The major chemo types of oregano oil from Indian origins were found to be thymol [6,7,10] and carvacrol [6‑9].

In Uttarakhand Himalaya, oregano is wildly grown in forest lands, but due to deforestation, overexploitation, overgrazing the availability of this important traditional medicinal and aromatic herb is limited. The commercial cultivation of this herb is also not in trends, but it is cultivated in some parts of India. The information about harvesting stages, herb, and oil yield of oregano is limited.

Therefore, the purpose of this study was to determine the effects of phenological stages on herbage yield and quality of oil as well as to determine the best harvesting time of wild oregano under the agroclimatic condition of Doon valley of Uttarakhand, India.

The experiment was conducted at the research field of Centre for Aromatic Plants (CAP), Selaqui, located at Dehradun, India at an altitude of 680 m above sea level during year 2009‑10. Live germplasm of oregano was collected from Bhowali, Nainital (altitude 1700 m) and cultivated for experiment under the climatic conditions of Doon valley. The specimen of oregano was duly identified in Centre for Aromatic Plants (CAP) and deposited with voucher specimens no. (CAP‑192). The soil was sandy loam (68.8% sand, 25.6% silt, 5.6% clay) with pH 7.4, EC 0.159 dSm-1, 0.03% total nitrogen, 103 ppm available phosphorus, 26.3 ppm available potassium, and 0.47% organic carbon. Five phenological stages, i.e. early vegetative, late vegetative, flower initiation, full bloom and fruit set stages were considered as treatments. Before planting, farmyard manure (200 q/ha) was thoroughly mixed and a basal dose of nitrogen (80 kg/ha), phosphorus (60 kg/ha), and potassium (40 kg/ha) was applied. The rooted plants were transplanted in November, 2009 at 45×45 cm population density. The design of experiment was in randomized block design (RBD) with three replications. In each replication, five plants were randomly selected for the recording of different parameters. Harvesting was done at each phenological stage between the months of February to May, 2010. Growth and yield parameters namely, plant height (cm), number of branch/plant, fresh and dry herb yield (q/ha), fresh and dry oil yield (kg/ha), and oil content (%) were recorded in all the treatments.

Fresh and shade dried leaves with small twigs (aerial parts) of each sample (300 g) of different harvesting stage (phenological stage) were separately hydro distilled for 3 h using a Clevenger‑type apparatus. The collected oil samples were dried over anhydrous sodium sulfate and stored in sealed vials at 4° until analyzed.

GC analyses were carried out by an Agilent Technology 6890 N gas chromatograph data handling system equipped with a split/splitless injector and fitted with FID using N2 as the carrier gas. The column was HP‑5 capillary column (30 m×0.32 mm, 0.25 μm film thickness) and temperature program was used as follows: initial temperature of 60° (hold: 2 min) programmed at a rate of 3°/min to a final temperature of 220° (hold: 5 min). Temperatures of the injector and FID were maintained at 210 and 250°, respectively.

The GC‑MS analyses were carried out on a Perkin Elmer Clarus 500 gas chromatograph equipped with a split‑splitless injector (split ratio 50:1) data handling system. The column was an Rtx®‑5 capillary columns (60 m×0.32 mm, 0.25 μm film thickness). Helium (He) was the carrier gas at a flow rate 1.0 ml/min. The GC was interfaced with (Perkin Elmer Clarus 500) mass detector operating in the EI + mode. The mass spectra were generally recorded over 40‑500 amu that revealed the total ion current (TIC) chromatograms. The temperature program was used as described above. The temperatures of the injector, transfer line, and ion source were maintained at 210°, 210°, and 200°, respectively.

Identification of the individual components was made by matching their recorded mass spectra with the library (NIST/Pfleger/Wiley) provided by the instrument software, and by comparing their calculated retention indices with the literature value [11].

Values are given in average

A total number of 26 components accounting for 86.71‑89.27% of the total composition were identified by GC and GC‑MS (Table 2). Among the constituents of oil, thymol (46.90‑62.26%) was found as the major component followed by g‑terpinene (1.11‑11.75%) and p‑cymene (3.11‑5.32%). Thymol which was found in abundance in the essential oils of all the five growth stages, recorded maximum amount at late vegetative (62.26%) which was slightly but steadily reduced with growth of plant and the lowest percentage in early vegetative stage (46.90%). The maximum (62.26%) and minimum (46.90%) thymol content has moderate difference among the growth stages. The composition of g‑terpinene increased with the development of the crop. It was recorded in lesser amount in early and late vegetative stages (1.11 and 4.39%), respectively, whereas at flower initiation, dull bloom and fruit set stage it ranged from 10.43‑11.75%. The percentage of p‑cymene was slightly higher in full bloom and fruit set stage of the crop as compared with vegetative and flowering initiation stage (fig. 1). 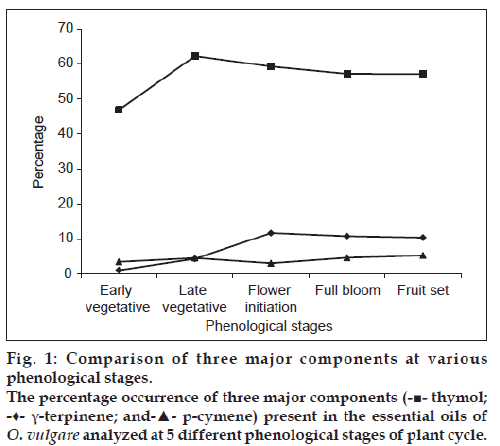 On the basis of the above findings, the harvesting of herbage at full bloom stage had almost all the parameters slightly greater than those harvested at early and late vegetative, flower initiation, and fruit set stages. Therefore, the study revealed that harvesting of the crop at full bloom is optimum time to get better herbage and oil yield. The oil yield obtained through dry herbage also recorded better results as compared with fresh herbage. In all the developmental stages the quality of the oil found similar having some quantitative variations, as the occurrence of g‑terpinene, which constituted 1.11‑4.39% in vegetative stages and increased up to 10.43‑11.75% with the advancement of the crop age. The harvesting of the crop in three phenological stages, i.e. flower initiation, full bloom stage, and fruit set stage showed similarity in quality and quantity of the oil composition as compared with vegetative stages.

The authors thank to the research and field staff of Centre for Aromatic Plants (CAP) for their valuable support during course of study.