Atrazine, a herbicide is one the most toxic and sustaining pollutants in aquatic environment. It is detectable in surface water and in underground sources of drinking water. Many studies indicate that atrazine might be a potent endocrine disrupting xenobiotic. There are limited studies have revealed that the effects of atrazine on sex steroids hormones, vitellogenin and induction of aromatase, gonadosomatic index and hepatosomatic index. In this study, juvenile Poecilia sphenops fish was exposed to three different (0.83, 1.25 and 2.5 ppm) concentration of atrazine for 100 d. Changes in plasma and gonadal content and concentrations of sex steroids and vitellogenin protein in poecilia sphenops under laboratory conditions were assessed. The low level of the atrazine show estrogenic effect in males, as determined by a shortage of testosterone induction. Present study suggests that low induction of plasma vitellogenin and aromatase in male fish become suitable biomarkers of exposure to estrogenic chemicals.

Herbicides are extensively used in agriculture, sanitation, gardens and weed control. Terrestrial and aquatic environments are mainly polluted by indiscriminately used agriculture products [1]. They contaminate the food chains and display toxic effects in animals and the human population. In the last 60 years, atrazine (2‑chloro‑4‑ethylamino‑ 6‑isopropylamino‑s‑triazine) has been one of the most extensively used herbicides in agriculture and roadways which, has been considered as an endocrine disruptor, causing adverse effects on reproductive function mainly by altered sex hormone levels and gonadal abnormalities [2‑6]. Possible interactions of atrazine with numerous endocrine functions have been the subject of various studies [7‑12].

Induction of vitellogenin protein in male fish has been extensively used as a biomarker for exposure of xenoestrogens in field and in laboratory studies. Vitellogenin (VTG) is a yolk precursor protein produced in the liver under the stimulation of ovarian estradiol and is normally found in female blood, whereas VTG levels in male fish are normally very low or absent [14]. However, if exposed to an exogenous estrogen, male fish are capable to synthesis VTG protein equivalent to that of mature female fish [15,16]. The enzyme aromatase, (P450 arom), is a member of the P450 cytochrome family complex and encoded by the CYP19 gene. The aromatase enzyme converts testosterone (T) to estradiol (E2) and is found in the brains of most male and female vertebrates. The enzyme is important for male sexual behaviour in a variety of species including rodents [17,18]. The aromatization of androgens to estrogens takes place in the endoplasmic reticulum and is classified as several functions of oxidation reactions [19]. A central function of aromatization is to play a very important and limiting role by T in the control of many physiological processes connected to reproduction, maintenance of masculinization of sexual behaviour in males, steroid hormone feedback on secretion of gonadotropic steroid hormone levels in the blood plasma [20].

Environment pollutants have been causing major impact on the hypothalamic pituitary gonad and hypothalamic pituitary thyroid axis as demonstrated in rare minnow [21]. The effect of atrazine on aromatase was treated as increase in estrogen and reduction in T levels described in fish [11]. Sanderson [22] and Hayes [9] found that abnormal elevated plasma concentration of E2 coupled with a decrease of the hormonal precursor T are the basis of atrazine. In adults, male goldfish exposed to high doses of atrazine displayed a hormonal imbalance in a time, dose related manner [11]. Mature male atlantic salmon are affected by atrazine with a significant reduction of 11‑KT. male sex steroid metabolism seems to be disrupted by atrazine exposure [23]. However, only limited information is available on the effect of atrazine on VTG production, aromatase activity and sex hormone levels in fish. Hence, fish can be used as experimental models in studies of endocrine disruption effects and also can serve as an early warning signal. Therefore, the objectives of this study were to elucidate the effects of atrazine on plasma and gonadal hormones, Gonadosomatic index and hepatosomatic index in Poecilia sphenops. Further the present study probe on sensitive markers like VTG and aromatase in fish Poecilia sphenops. The information obtained may be useful to explore the potential biomarkers for atrazine biomonitoring in aquatic environments.

VTG and aromatase enzyme linked immunosorbent assay (ELISA) kits were purchased from Cusabio, Italy and steroid hormone ELISA kit was purchased from Dia Metra, China and all other chemicals used in the study were obtained from Sigma Chemicals (USA).

Sexually mature males and females poecilia sphenops were obtained from local ornamental fish dealer and maintained in the aquarium separately and intended for breeding within 7 d. The laboratory temperature, 28±2° and normal illumination (approx 12 h light and 12 h dark) with the ration of pieces of earthworm twice a day were ideal with continuous aeration. The newly hatched fries were separated from their respective mother and maintained in 100 l tank. A total of 200 fry (0 d old fry) were collected and separated into four equal treatment groups. Fifty individuals in each group were exposed to three different concentrations (1/10 of LC50‑2.5 ppm, 1/20 of LC50‑1.25 ppm and 1/30 of LC50‑0.83 ppm) of atrazine and a control was also maintained simultaneously. They were used for the experiment in the same day hatching. The young ones are fed with commercial feed throughout the experimental period. The experiments were repeated three times. The aquarium system was static and bathing medium was changed once in 7 d with same concentration of atrazine. Fries were captured and removed from each group after different exposure periods (60, 80 and 100 d). On respective sampling period, the blood was collected from the caudal vein with a heparinized microsyringe and transferred to plastic eppendorf tubes. Blood samples were centrifuged at 10 000×g for 15 min and the resulting plasma was analysed. Gonadosomatic indices (GSI) and hepatosomatic indices (HSI) were calculated. During each sampling ten fishes were sacrificed and dissected out carefully the liver, and gonads for analysis. The gonadosomatic index (GSI) was calculated as the percentage of the ovary or testis weight to the whole body weight. The liver somatic index (LSI) was calculated as the percentage of the liver weight to the whole body weight.

The values were expressed as mean±SEM (n=5). Differences between groups were assessed by one‑way analysis of variance (ANOVA) using the statistical package for social sciences (SPSS) software package for windows (version 16.0). Post hoc testing was carried out for intergroup comparisons using the least significant difference test and the values of P<0.05 were considered as statistically significant. Concentration of plasma testosterone in male and female Poecilia sphenops exposed to 0.83, 1.25 and 2.25 ppm of atrazine, each value is mean ± SEM of 5 determinations. Concentration of plasma estradiol in male and female Poecilia sphenops exposed to exposed to 0.83, 1.25 and 2.25 ppm of atrazine, each value is mean ± SEM of 5 determinations. 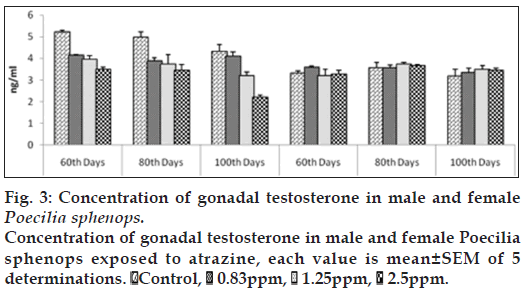 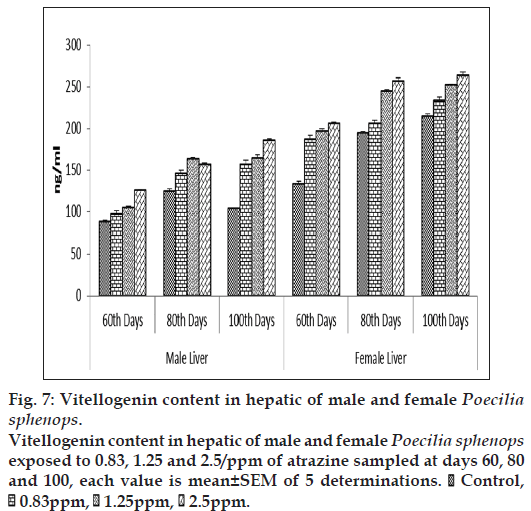 In the current study, atrazine decreases the T levels in the plasma and testis at all tested concentration on all exposure days. Supporting previous data [11], we found that reduction in plasma T in male fish. Plasma E2 levels in male showed a significant increase in the highest exposure of atrazine. Decrease in plasma T in males and connected increase in plasma E2 levels. Atrazine effects on the sex steroids T and E2 can be pronounced by a stimulatory effect on aromatase activity increasing the change of T into E2 [29]. However there was noticeable increase in E2 concentration in male plasma and testis, and no induction of T in female fish. The effect of atrazine on sex steroid has been shown in a variety of species like rats [30] and fish [11].

The present study suggested reproductive effects in fish on exposure to atrazine. It is a new trend related with atrazine for plasma concentrations of VTG in male and female fish. The result indicated that atrazine induce low level of VTG in male fish which supports a report from a study on plasma VTG in fathead minnow [31]. Induction of VTG has been reported in rainbow trout hepatocytes after atrazine exposure [32]. However no effects were described on VTG protein concentrations in adult goldfish (Carassius auratus) and male carp hepatocytes [11,33,34].

Atrazine also produced a low induction of aromatase in gonads. Our results support the current hypothesis that the mechanism of atrazine induces the aromatase activity. Moreover aromatase activities in gonads of Poecilia sphenops were altered by atrazine. However, our results are similar to the results stated for female zebrafish where atrazine significantly induces aromatase expression [35]. It has been reported that induction of aromatase in male juvenile alligators when exposed to atrazine [36]. In addition, some other studies have found no effect of atrazine on aromatase activity in zebrafish [37]. The current upshots are in agreement with the clarifications of the earlier reports. We have established for the first time that atrazine also produced a low level induction of aromatase activity in gonads, decreases T and increases E2 concentration in male Poecilia sphenops. The female Poecilia sphenops was not affected by atrazine. Increased estradiol was largely due to reduction in T which, was predictable by altered physiological measurements of endocrine disruptions like steroid hormones, aromatase, VTG, gonado somatic index and hepatosomatic index. These findings have shown that atrazine disrupts steroidogenesis in fish. Measured plasma hormone levels were highly variable in atrazine exposed males and females fishes. Hence, atrazine herbicide can carefully be suggested for weed controlling in aquatic media. Plasma E2 and T hormone levels, VTG protein content may be good, early biomarkers for atrazine toxicity studies.