Liquid emulsions have been used to deliver proteins and peptide orally. Emulsions are thought to protect the drug from chemical and enzymatic breakdown in the intestinal lumen. Drug absorption enhancement is dependent on the type of emulsifying agent, particle size of the dispersed phase, pH, solubility of drug and the type of lipid phase used. Water-in-oil microemulsions have been shown to enhance oral bioavailability of proteins and peptides [1,2]. The lipid phase of microemulsion composed of medium chain fatty acid triglycerides increased the bioavailability of muramyl dipeptide analog [3]. However, the major concern is the loss of biological activity caused by protein agglomeration [4].

Egg yolk is one of the components of egg which mainly contains proteins, carbohydrates, lipids, minerals and water. It has excellent emulsifying properties and the phospholipids extracted from the egg yolk are mainly been utilized as emulsifier and in liposome preparations. Effect of egg yolk as penetration enhancer and to improve the stability of protein drugs is relatively less studied. Especially for insulin no reference was found from the literature search for use as penetration enhancer or to improve the stability of formulations for oral delivery [5]. The egg yolk contains 15.7-16.6% protein, 31.8-35.5% lipid, 0.2-1.0% carbohydrate and 1.1% ash [6]. Egg yolk is the major source for the production of purifi ed phospholipids. The major fatty acids in egg yolk triglycerides are oleic acid (C18:1), palmitic acid (C16:0), linoleic acid (C18:2) and stearic acid (C18:0) [7]. Fatty acids like myristic acid (C14:0) and others are found only in trace amounts. Cholesterol contributes about 1.6% of raw egg yolk and about 5% of egg yolk lipids. Free cholesterol is about 84% of the total cholesterol with the remaining 16% being cholesterol ester [7].

In this study, we tried to evaluate the combined use of egg yolk and self microemulsifying system to improve the oral bioavailability and stability of insulin. The process for the preparation of delivery system greatly influence the encapsulation efficiency and stability of the protein drug, especially when protein molecule comes in contact with hydrophobic surfaces, air-water interfaces, shear stress, temperature and organic solvents. In addition, size of the particles has been shown to have influence on the oral absorption [8-10]. Insulin-egg yolk dispersions were prepared by lyophilization followed by dispersing it into self microemulsifying solution.

Yolk from the chicken eggs was separated by decantation and used for the preparation of solid dispersion. Human insulin solution in tris buffer pH 7.4 (10 mmol, 200 IU/ml) equivalent to 1000 IU were added to about 4 g solids of egg yolk (equivalent to 8.5 g of egg yolk liquid), respectively to get final human insulin content of 0.250 IU/mg. The resultant dispersion was mixed on a magnetic stirrer (Remi®, India) for 10 to 15 min. The dispersion was transferred to tubular glass vials and frozen at -40° for 3 h and lyophilized for 38 h at condenser temperature of -40° and pressure of 112×10-3 mbar. After complete drying vacuum was broken with nitrogen gas to purge the vials with nitrogen and capped with butyl stopper and aluminium seals

Preparation of self microemulsifying solution (SMEDS)

Lyophilized human insulin-egg yolk powder was dispersed in the above optimised microemulsion solution to get 40 IU/ml human insulin content and mixed for 2 h at room temperature (NMT 25°) to get opaque dispersion. The solutions were stored at 10-15° till use in a glass vials.

Characterization of self microemulsifying dispersions

The morphology of the InsEY-SMEDS particles was viewed using a conventional scanning electron microscope (JSM 5400, Joel, Japan) at an accelerating voltage of I5 kV. One drop of the InsEY-SMEDS dispersion was placed on a graphite surface. After air drying, the sample was coated with gold using Ion Sputter.

InsEY after lyophilization or InsEY-SMEDS was dispersed in 4 ml of 0.01N HCl (equal to 3 IU of human insulin) and mixed for 5 min on vortex mixer (Remi® India) and sonicated for 10 to 15 sec at 20° temperature. Then volume the solution was adjusted to 5 ml and filtered through 0.22 µm syringe disc filter (Ultipor® N66, Pall life Sciences). The filtered solution was quantitatively analysed for human insulin by RP-HPLC equipped with UV/Vis detector (Agilent 1200 series RRLC®). A reversed phase C18, 1.8 µm, 4.6×50 mm column. The gradient system consisted of mobile phase-A, mixture of buffer and acetonitrile (82:18), and mobile phase-B, mixture of buffer and acetonitrile (50:50). The flow rate was 1 ml/min with oven temperature of 40° and detection wavelength at 214 nm. The dispersions obtained after lyophilization were dissolved in a mixture of 0.01N HCl and ethanol (99%) with solvent ratio of 4:1, respectively. The solution was filtered though 0.22 µm syringe disc filter and injected. The entrapment efficiency (%) was determined by human insulin content obtained as percentage of initial amount used in the formulation.

Release of insulin from self microemulsifying dispersions

The release rate of human insulin from InsEYSMEDS was determined by suspending the dispersions (equal to 100 IU of human insulin) in 50 ml, pH 7.4 phosphate buffer USP or 0.1N HCl. During the experiment (4 h) samples were shaken horizontally in a constant temperature shaker (Remi®, India) at 37±1° and 50 stokes per minute. At scheduled time intervals, 1 ml of sample was removed and replaced with 1 ml of fresh release medium. The sample was ultracentrifuged at 22,000 rpm at 20° for 15 min, then the supernatant was collected and quantitatively analysed for human insulin content by RP-HPLC.

In vitro degradation of insulin from InsEYSMEDS dispersions was studies in presence of α-chymotrypsin (51 U/mg). In this study aqueous dispersion of InsEY-SMEDS in 0.05M phosphate buffer pH 7.8 was incubated for 30 min with α-chymotrypsin at 37±1°. The final concentration of the insulin and the enzyme were 15 U/ml and 26 U/ml. Insulin solution served as control. After incubation, the reaction was terminated by addition of 0.5 ml of 0.1% TFA. Subsequently, 0.5 ml of ethanol 99% was added to each tube and sonicated for 10 to 15 sec. Then the volume was adjusted to get the human insulin concentration of 0.5 to 0.6 IU/ ml with a mixture of 0.01N HCl and ethanol (4:1). The insulin solution was filtered though 0.22 µm syringe disc filter. The filtered solution was quantitatively analyzed for human insulin content by RP-HPLC.

ELISA technique was used to evaluate whether human insulin entrapped in InsEY-SMEDS dispersions is biologically active. InsEY-SMEDS dispersions equivalents to 3 units of human insulin were dissolved in a mixture of phosphate buffer pH 7.4 and ethanol 99% with solvent ratio of 4:1. The solution was mixed for 5 min and then sonicated for 15 sec and volume adjusted to 5 ml and filtered through 0.22 µm syringe disc filter. Second dilution was made by diluting 50 µl of filtrate to 200 ml with phosphate buffer pH 7.4 to final concentration of about 150 mU/l. An aliquot of sample was withdrawn from the solution and insulin content was analyzed by ELISA as per standard protocol by measuring the optical density at 450 nm using plate reader (BioRad®, model 680 microplate reader) and results were calculated using Microplate Analyst 3.0.2 software.

Diabetes was induced in male Wistar rats (200-280 g) by intraperitoneal injection of streptozocin (40 mg/kg) in citrate buffer pH 4.5 via peritoneum. The solution of streptozocin was aseptically prepared and filtered through a 0.22 µm membrane filter (Millex- GV, Millipore). Rats were considered diabetic when fasted plasma glucose levels were near and above 300 mg/dl.

Diabetic rats, fasted overnight for 10 h, were injected subcutaneously with a single dose of human insulin injection (Huminsulin-R® 40 IU/ml Injection, Elly Lili) at a dose level of 2 IU/kg. Six rats were used for this treatment group.

Insulin-egg yolk dispersions after lyophilization showed characteristic of dense yellow cake formation with good dispersibility in purified water. The aqueous dispersions were opaque and pale yellow. The opaque appearance could be attributed to the emulsifying property of the egg yolk. Particle size of the SMEDS solution and InsEY-SMEDS showed very fine particle size with mean diameter of 0.387±0.052 µm for SMEDS solution. The self microemulsifying solution after addition into water resulted into formation of nanoemulsion. When InsEY was dispersed into SMEDS system and then added into water, increase in particle size to 1.023±0.316 µm was observed. It could be due to formation of dispersed particles of InsEY into SMEDS system and the presence of phospholipids and variety of fatty acids present in egg yolk. The SEM images (fig. 1) confirm that the dispersed particles are circular in shape and well dispersed and separated on the surface. 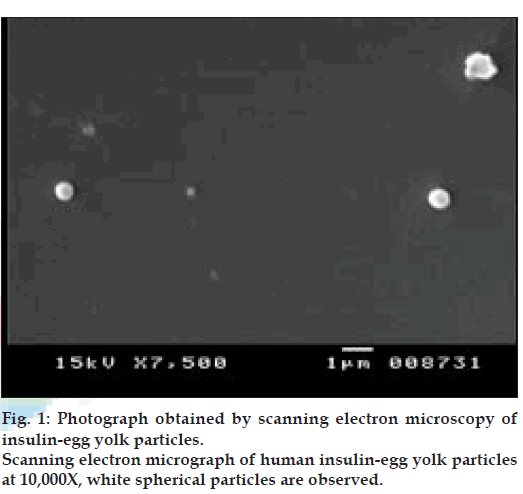 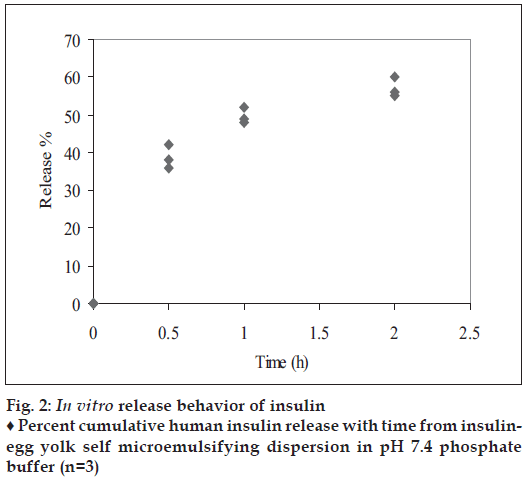 The in vitro stability of insulin in presence of proteolytic enzyme, α-chymotripsin, indicated that insulin was comparative more stable when formulated as InsEY-SMEDS dispersions as compared to insulin solution as a control. The results of residual human insulin content are depicted in Table 1. It can be seen that when insulin solutions were incubated with α-chymotripsin, ≤15% of human insulin remained undegraded after 30 min. InsEY-SMEDS incubated in the same medium, ≥51% of entrapped insulin remained undegraded over the same period. Each sample was analysed in triplicate.

Results are the mean of three observations±SD

Table 1: In Vitro stability of insulin nanoparticles in presence of Α-chymotripsin 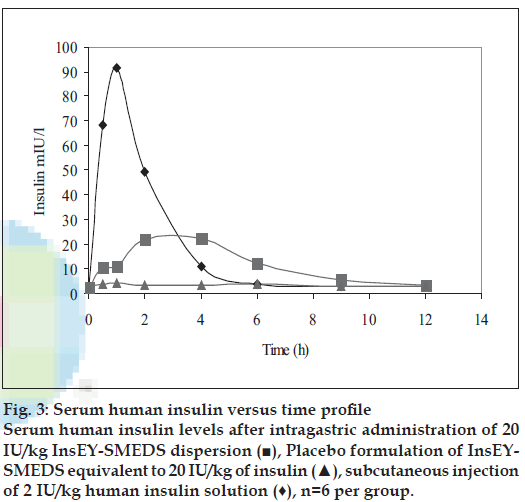 Pharmacokinetic parameters are estimated from the each group of six male
Wistar rats after subcutaneous injection of 2 IU/kg human insulin solution and oral administration of 20 IU/kg insulin self microemulsifying dispersion (InsEY-SMEDS). 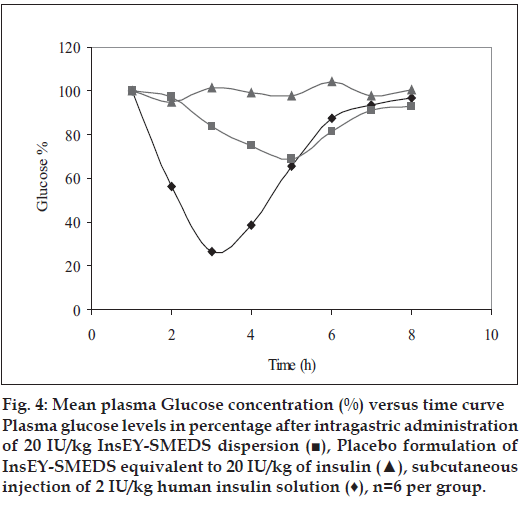 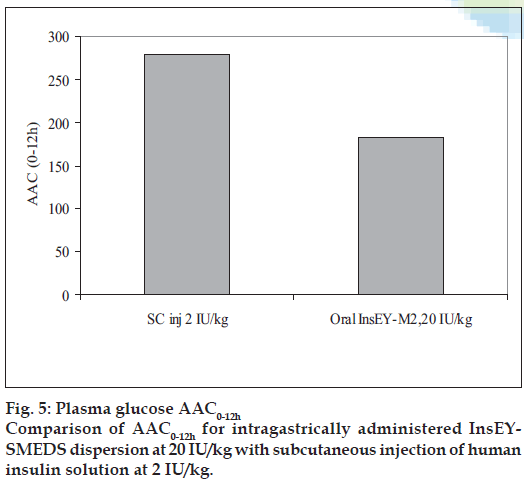 Insulin stability and biological activity was found to be enhanced in presence of egg yolk though insulin was formulated with hydrophobic components of SMEDS solutions. The lyophilization of insulin with egg yolk showed excellent entrapment of insulin into the formulation. The duration of in vitro insulin release was found to get extended beyond 3 h from InsEY-SMEDS dispersions, however estimation could not be performed for extended period due to degradation of insulin in the release medium at 37°. In vivo study in the streptozocin induced diabetic rats showed improvement in the oral absorption of insulin as indicated by serum human insulin AUC0-12h and plasma blood glucose AAC0-12h.

The authors are grateful to Dr. Bhate from Analytical Solutions, Navi Mumbai and Dr. Arun Bhat, Raj biotech for their kind support. The authors would like to thanks to Prof. Ravi Prakash, Dean Research and Consultancy Division, BITS, and Prof. Rajendra N. Saha, Dean Educational Development Division and faculty Division III, BITS for their co-operation and encouragement during various stages of this work.