Isolation and identification of nicotine from leucas aspera (willd) link

A liquid alkaloid has been isolated from the aerial parts of Leucas aspera (Willd) link and identified as nicotine, based on physicochemical, TLC, HPTLC and RP-HPLC analysis.

Leucas aspera (Labiatae), commonly called chota halkusa, grows as a weed on wastelands and roadsides all over India. Entire plant is used as an insecticide and indicated in traditional medicine for coughs, colds, painful swellings and chronic skin eruptions [1]. It possesses wound healing property and is used in cobra venom poisoning [2]. The plant has been scientifically investigated for antiinflammatory [3], analgesic activity [4], and for its protective effect against cobra-venom poisoning in mice [5]. Compounds isolated from the plant include long-chain aliphatic compounds [6-8], triterpenes [9,10], sterols-sitosterol, stigmasterol, campesterol and a novel phenolic compound [8].

With the exception of a positive chemical test in a preliminary phytochemical study conducted on the shoots of Leucas aspera way back in 1947 [11], there have been no reports so far on the isolation of alkaloids from this plant. This work was envisaged to isolate and identify the alkaloids present in this plant.

The herb in full bloom was collected from our University Medicinal Farm, authenticated at Botany Field Research Laboratory, Madras University, Chennai, and a voucher specimen deposited in the pharmacognosy laboratory for future reference.

The shade-dried plant material (1 kg) devoid of roots was reduced to a fine powder. Methanol extract (ME, yield- 18% w/w of dried plant material) was prepared by cold maceration with methanol, followed by concentration in a rotary vacuum evaporator. Two different methods were adopted for the isolation of alkaloids. ME (50 g) was subjected to separation of alkaloids by reported standard procedure [12] with slight modification. The crude alkaloidal residue, upon further purification, yielded an oily residue (L-OR, 0.04% w/w of dried plant material) with a strikingly characteristic odour recalling tobacco.

Liquid nature of L-OR and problems with purification in method 1 prompted us to follow conventional distillation used for the separation of volatile alkaloids [12]. Extraction of the distillate with diethyl ether followed by evaporation yielded a colourless oily liquid (LAA, 0.016% w/w of the dried plant material) which gave a single spot on TLC.

L-OR was a light yellow coloured oily liquid with an intense acrid burning taste and characteristic tobacco odour. With alkaloidal reagents, it gave characteristic coloured precipitates confirming its alkaloid nature. L-OR gave a positive Sanchez test [13] for nicotine. TLC of L-OR in methanol:ammonia (200:3 v/v) – solvent system A (SSA), and toluene:ethyl acetate:diethyl amine (70:20:10 v/v) – solvent system B (SSB) gave in each a bright orange spot with Dragendroff’s reagent. However there were additional spots.

Co-TLC of LAA with nicotine in SSA and SSB gave a clean orange spot with perfectly matching Rf 0.76 and 0.66 respectively. Also the colour began to fade quickly, which is typical of nicotine [14].

Comparitive HPTLC of nicotine and LAA was done to confirm the identity of LAA. Nicotine and LAA (10 μl each) was applied undiluted and developed in SSA and SSB. The spots were scanned at 254 and 366 nm, and at 544 nm after derivitisation with Dragendroff’s. Both the tracks showed a single major spot at Rf 0.76 and 0.66 respectively, and a single peak at the same Rf when scanned at 254 nm and 540 nm (Figs.1-4). Variable wavelength scan of these spots on the two tracks showed them to have the same wavelength of maximum absorbance, i.e., 260 nm. 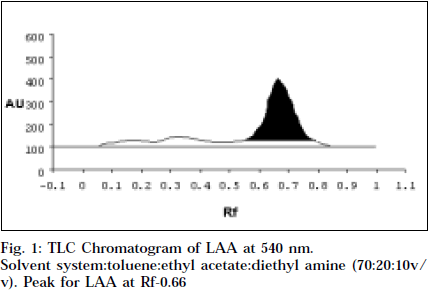 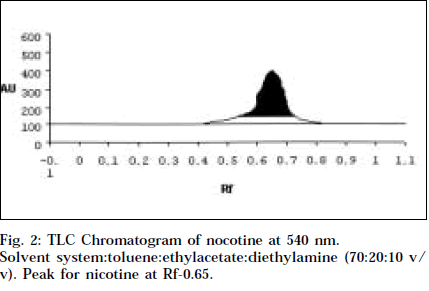 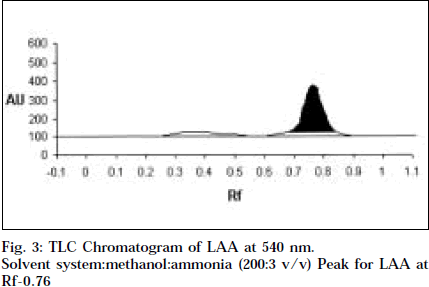 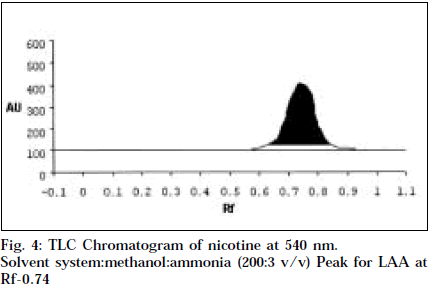 RP HPLC of nicotine and LAA, applied by separate injections in dilution of 100 μg/ml using methanol as mobile phase with effluent monitoring at 260 nm, resulted in similar retention time of 2.45 and 2.44 min, respectively (Figs. 5 and 6). Also LAA was shown to be 93% pure from % peak area calculations. This confirms the purity of LAA and identifies it as nicotine. 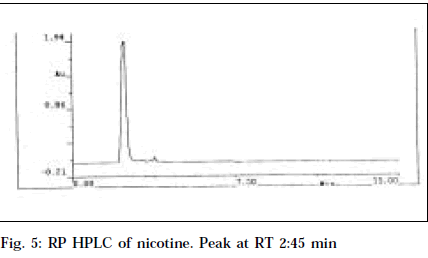 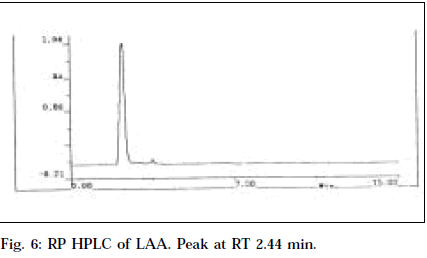 This is the first report of an alkaloid from Leucas aspera. It has been isolated in a pure form. Its liquid nature, bitter acrid taste, strikingly characteristic tobacco-like odour, matching Rf with nicotine (0.66) in TLC and HPTLC, common λmax (260 nm) in UV and HPTLC studies, same retention time (2.44 and 2.45 min) in HPLC studies positively confirm the identity of LAA as nicotine.

The insecticidal property of the herb could be due to the presence of nicotine. Presence of alkaloid in Leucas aspera is all the more significant from the chemotaxonomic point of view. This is because Leucas aspera belongs to Labiatae, which is under the order Tubiflorae. Of the 26 families in this order, only 4 families are well represented for alkaloids [16]. A few pyridine and pyrrolidine alkaloids have been reported in Labiatae. Presence of nicotine, a pyridine pyrrolidine alkaloid, in Leucas aspera is further supported and reinforced by this fact.