Conventional furosemide tablets are practically insoluble in water, have slow onset of action (45-60 min) and poor bioavailability (39-53%), and therefore cannot be given in emergency clinical situations like hypertension or pulmonary edema. So purpose of research was to provide a fast dissolving oral dosage form of furosemide, which can provide quick onset of action by using concept of mixed hydrotropy. Initially solubility of furosemide was determined individually in 4 hydrotropic agents namely urea, sodium acetate, sodium benzoate, sodium citrate at concentration of 10, 20, 30 and 40% w/v solutions using purified water as solvent. Highest solubility was obtained in 40% sodium benzoate solution. Then different combinations of 2, 3 and 4 hydrotropic agents in different ratios were used to determine solubility, so that total concentration of hydrotropic agents was always 40%. Highest solubility was obtained in solution of urea+sodium benzoate+sodium citrate at optimum ratio of 15:20:5. This optimized combination was utilized in preparing solid dispersions by common solvent technique using distilled water as solvent. Solid dispersions were evaluated for flow properties, XRD, DSC, SEM and were also compressed to form tablets. Dissolution studies of conventional and prepared tablets were done using USP Type II apparatus. It was concluded that the concept of mixed hydrotropic solid dispersion is novel, safe and cost-effective technique for enhancing bioavailability of poorly water-soluble drugs by dissolving drug in nonionized form. The magical enhancement in solubility of furosemide is clear indication of its potential to be used in future for other poorly water-soluble drugs in which low bioavailability is major concern.

About 40% of new chemical entities coming from discovery are poorly bioavailable. Poor bioavailability exerts strong limits to the performance of a drug by the necessity to administer a much higher dose than strictly required from a pharmacologic point of view. This can induce important side effects or create problems related to the cost of treatment. Poor bioavailability may also oblige the formulator to choose the injection route instead of the oral route. For good oral bioavailability drug must be soluble in gastro-intestinal fluids i.e. aqueous soluble and also possess permeability properties for good membrane diffusion in order to reach the bloodstream.

Hydrotropic agents have been found to be effective to enhance aqueous solubility of several hydrophobic drugs and hence can play significant role in improving oral bioavailability. Maheshwari et al. has increased solubility of various poorly water-soluble drugs using hydrotropic solubilization phenomenon for example salicylic acid [1], ketoprofen [1,2], aceclofenac [3], frusemide [4], cefixime [5], tinidazole [6] and amoxicillin [7]. Finding the right hydrotropic agent for a poorly soluble drug requires screening of large number of hydrotropic candidates. However, once the correct hydrotropic agent is identified for a drug, significant solubility enhancement can easily be achieved. Hydrotropic approach is the promising approach with great potential for poorly soluble drugs since it does not require chemical modification of the drug, neither use of organic solvents nor preparation of emulsion systems. The primary objective of this study was to enhance the solubility of furosemide using hydrotropes and their combinations so that oral bioavailability can be increased.

Initially solubility of furosemide was determined individually in solutions of 4 hydrotropic agents (Ha) namely urea (U), sodium acetate (A), sodium benzoate (B), sodium citrate (C) at concentration of 10%, 20%, 30% and 40% solutions using purified water as solvent (Table 1). For determining solubility, accurately measured 3 ml of a particular blend of hydrotropic agent was taken in a 10 ml volumetric flask and excess amount of drug was added and mechanically shaken until saturated solution was formed. The volumetric flask was shaken on mechanical shaker for 12 h so that equilibrium solubility can be achieved and solution was allowed to equilibrate for 24 h. Then solution was centrifuged at 2000 rpm for 5 min in ultra-centrifuge and then solution was filtered through Whatman grade 41 filter. Aliquot was suitably diluted with purified water and analyzed using UV spectrophotometer at 333 nm. From the results of above studies it was concluded that solubility of furosemide was increasing with increasing concentrations of hydrotropic agents, for example solubility in 40% urea solution was found to be much higher than solubility in 10%, 20% or 30% urea solutions. However, highest solubility was obtained in 40% sodium benzoate solution. Then, different combinations of above-mentioned 4 hydrotropic agents in different ratios were tried to determine enhancement in solubility, so that total concentration of hydrotropic agents was always 40% w/v (Tables 2 and 3). The blend U+B+C in the ratio of 15:20:5 gave the highest solubility enhancement, and therefore, this optimized combination of hydrotropes was selected for the preparation of solid dispersions.

For preparation of hydrotropic solid dispersion, accurately weighed urea, sodium benzoate, sodium citrates were taken in a beaker and were mixed properly. Then, minimum possible quantity of warm purified water sufficient to dissolve the above mixture was added (because lesser the amount of water lesser will be the time required to evaporate it and chemical stability of drug may not be affected adversely).

Table 2Solubility of furosemide in mixture of different hydrotropic agents

Table 3Solubility of furosemide in mixture of different hydrotropic agents

Dissolution of the hydrotropic mixture was facilitated by agitation of a Teflon coated magnetic rice bead on a high-speed magnetic stirrer. After complete dissolution of hydrotropic mixture, furosemide was dissolved in the above solution and temperature was maintained in the range of 55-60º so as to facilitate the evaporation of water. As evaporation proceeded, speed of rice bead automatically decreased and it stopped stirring when most of the water was evaporated, thus indicating the formation of solid dispersion (wet). The wet solid dispersion thus obtained were spread on several watch glasses and the watch glasses were kept in hot air dry oven maintained at 50±2º so that remaining moisture could also be evaporated easily and a constant weight with no further weight loss (due to evaporation) could be obtained. After complete drying, solid dispersions were crushed using a glass pestle mortar and passed through sieve # 60 and were finally stored in an airtight glass bottle.

Solid dispersion equivalent to 20 mg of furosemide were tested in dissolution rate studies using USP XXIV (type II) dissolution test apparatus (Model TDT6P, Electrolab, Mumbai, India) with paddle to rotate at 50 rpm, 900 ml of 0.1N HCl was taken as dissolution media with temperature of 37±0.5°. At definite time interval 10 ml of the sample were withdrawn and were analyzed for drug content. Withdrawn samples were also replaced with fresh dissolution media. Calculations for the amount of drug were done using regression equations. Similarly dissolution of conventional tablet was done and results are reported in Table 4.

Micromeritic properties of the solid dispersions studied were bulk density, tapped density, compressibility index, Hausner ratio and angle of repose. The results are reported in Table 5.

The powder X-ray diffraction spectra of furosemide, prepared hydrotropic solid dispersions and the physical mixtures were obtained using RU-H3R, Horizontal Rotaflex rotating anode X-ray generator instrument, Rigaku (Rigaku International Corporation, Tokyo, Japan). The sample was spread on a graticule and pressed in such a way that sample did not fall on keeping the graticule vertical. The graticule was placed in sample holder and exposed to CuKa- radiation (40 KV, 50 MA), 2q=5° to 40° at a scanning speed 4/min and step size 0.02° 2q. The X-ray diffractograms of furosemide, solid dispersion and physical mixture so obtained are presented in fig. 1.

In order to obtain the DSC thermograms of the drug, solid dispersion and physical mixture, TA Instruments-2910 modulated DSC (USA) was employed. To carry out these studies, 4 mg of drug or formulation of drug was weighed accurately and placed in one of the matched aluminium pan. The sample pan and the reference pan both were sealed and placed on the heating cell and covered with a glass bell jar. Heating at a rate of 10°/min with a continuous purge of nitrogen (45 cc/min) was done with recording of energy changes in the sample with respect to the reference in the temperature range of 80-200°. Various DSC thermograms (melting isotherms) are shown in fig. 2.

SEM was used to investigate solid state physical structure of the prepared solid dispersions. SEM photographs of furosemide, its physical mixture with hydrotropic agents and its solid dispersions were obtained using a scanning electron microscope model JEOL JSM 5600 with accelerating voltage from 0.5 to 30 KV and are shown in fig. 3. 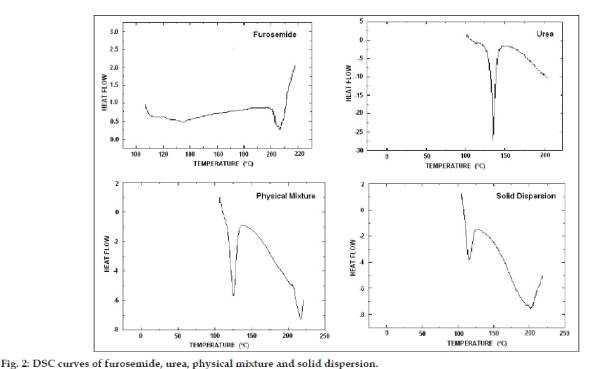 The closeness of values of bulk density and tapped density indicates the free flowing property of solid dispersions. The values of compressibility index, Hausner ratio and angle of repose indicate that the flow character of solid dispersion is fair and no aid is needed to increase the flow properties. In conclusion, presently pharmaceutical industry has reached the point where the discovery of new drugs has become very difficult and expensive. Exploiting the maximal value that can be generated of existing compounds now constitutes an important driver of revenue and hydrotropy is a solution for pharmaceutical companies to enhance the life cycle of the existing products in which poor solubility is a major concern. Many useful drugs may be abandoned due to poor pharmacokinetic properties such as poor water solubility. Through hydrotropy, water solubility of a drug may be improved thus enabling maintenance of drugs in the existing products pipeline.

It can be concluded that the concept of mixed hydrotropic solid dispersion is novel, safe and costeffective technique for enhancing bioavailability of poorly water-soluble drugs by dissolving drug in nonionized form. The magical enhancement in solubility of furosemide is clear indication of its potential to be used in future for other poorly watersoluble drugs in which low bioavailability is major concern.