Gelatin A microspheres of propranolol hydrochloride for intranasal systemic delivery were developed with the aim to avoid first pass metabolism, to improve the patient compliance, to use an alternative therapy to conventional dosage form, to achieve controlled blood level profiles, and to improve the therapeutic efficacy of propranolol hydrochloride in the treatment of various cardiovascular disorders and as a prophylactic for migraine. Gelatin A microspheres were prepared by emulsion crosslinking method using glutaradehyde as a crosslinking agent. Gelatin and chitosan were used as polymer and co polymer respectively. All the prepared microspheres were evaluated for physical characteristics, such as particle size, incorporation efficiency, swelling index, in vitro bioadhesion using rat jejunum and in vitro drug release in pH 6.6 phosphate buffer. Average particle size of microspheres was found to be in the size range 1-50 mm. Increase in drug and polymer concentration in the formulation increased incorporation efficiency. All the microsphers showed good bioadhesive properties and swelling indices and good sustained release of drug. The data indicates that propranolol hydrochloride release followed Higuchi's matrix and Peppa's model. Stability studies showed stability of formulation at all the conditions to which they were subjected.

Propranolol hydrochloride is drug of choice in many cardiovascular disorders and as a prophylactic in migraine [1]. Unfortunately, propranolol undergoes first pass metabolism. The bioavailability of propranolol after oral administration is approximately 20% [2]. Several approaches have been tried to develop nonoral formulations in addition to injections [3]. Among the non-invasive routes nasal administration has promising potential and a viable alternative for systemic medication of drug [4]. Nasal administration of propranolol hydrochloride in the form of solutions and organogels has already been reported but rapid nasal mucociliary clearance limits its sustained bioavailability [5]. Bioadhesive microspheres give more residence time to facilitate absorption through nasal mucosa against nasal mucociliary clearance [6]. Gelatin A is an acid hydrolytic product of collagen [7]. It is bioadhesive and biodegradable polymer that can be used for controlled drug delivery [8]. These observations promoted us to develop microspheres based on gelatin A as a promising formulation of propranolol hydrochloride for intranasal systemic administration as an alternative route to injections to increase the bioavailability, bypass first pass metabolism by the liver and to improve the release profile of the drug.

Gelatin A microspheres were prepared by emulsion cross-linking method. The drug was dissolved in an aqueous gelatin solution (10% w/v), which was preheated at 40° for 1 h. The solution was added drop wise to liquid paraffin while stirring the mixture at 1500 rpm at 35° for 10 m. This gives water in oil (W/O) emulsion. Stirring was continued for further 10 m at 15° and the microspheres were washed three times with acetone and isopropyl alcohol, respectively. The washed microspheres were air dried and then dispersed in 5 ml of aqueous glutaraldehyde-saturated toluene solution (25% v/v) at room temperature for 3 h to allow cross linking. The microspheres were washed with toluene and treated with 100 ml of 10 mM glycine solution containing 0.1% w/v Tween 80 at 37° for 10 m to block unreacted gluteraldehyde [10]. The resultant microspheres were finally freezedried. The chitosan-gelatin based microspheres were prepared by exactly the same method as mentioned above except that the chitosan solution prepared in 1% W/V glacial acetic acid was first mixed with the gelatin A solution. The drug was dissolved into it and then emulsification was followed as above. Different amount of drug and polymer were used to obtain the microspheres of optimum properties and characteristics. Percentage composition of gelatin A and chitosan is given in Table 1.

Table 1: Formulae For Different Batches of Gelatin A Microspheres of Propranolol Hydrochloride And Percentage Yield

To determine the incorporation efficiency, 25 mg of propranolol loaded microspheres were washed with 10 ml of phosphate buffer (pH 6.6) containing 0.1% (v/v) Tween 80 to remove the surface associated drug. The microspheres were then digested in 10 ml of 0.1 M HCl for 12 h at room temperature (25±20) to release the entrapped drug. Drug content was determined spectrophotometrically at 219 nm. Percent of total entrapment efficiency was determined by the formula; Total percentage entrapment efficiency = Percentage surface associated drug + percentage entrapped drug.

Bio-adhesive properties of propranolol-loaded microspheres were evaluated using everted sac technique. The animal study protocols have been approved by the Institutional Animal Ethical Committee’s (IAEC meeting proposal No: 39 Dated, 07/07/2005). Unfasted male Sprague dawley rats which were similarly nourished and grown in normal laboratory conditions were sacrificed and intestinal tissue was excised and flushed with 10 ml ice-cold isotonic phosphate buffer pH 7.2 containing 2 mg/ml glucose. Segment (6 cm) of jejunum was everted using a glass tube with a conical end of the tube. Through the opposite end of the tube 1.0-1.5 ml of isotonic phosphate buffer was poured until the sac was filled; thereafter the segment end was tightly tied. The intestinal tissue was maintained at 4° prior to incubation. The sacs were introduced into a 15 ml glass tube containing 60 mg of microspheres and 5 ml of phosphate buffer 7.2 incubated at 37° and shaken end over end after 30 m the sacs were removed, then the not attached microspheres were removed by centrifugation and dried The percentage of the attached microspheres was calculated by the difference between the initial amount of microspheres and amount of not attached microspheres before and after incubation.

To carry out the in vitro drug release, accurately weighed 50 mg of propranolol-loaded microspheres were dispersed in 400 ml of phosphate buffer (pH 6.6) in a beaker and maintained at 37±2° under continuous stirring at 100 rpm. At selected time intervals 5 ml samples were withdrawn through a hypodermic syringe fitted with a 0.4 μm Millipore filter and replaced with the same volume of pre-warmed fresh buffer solution to maintain a constant volume of the receptor compartment. The samples were analyzed spectrophotometrically at 219 nm. The released drug content was determined from the standard calibration curve of propranolol.

The in vitro diffusion study was performed using in vitro nasal diffusion cell [5]. The receptor chamber was filled with 60 ml of pH 6.8, phosphate buffer maintained at 37±2°. Accurately weighed microspheres equivalent to 10 mg propranolol were spread on sheep nasal mucosa. At selected time intervals 0.5 ml of diffusion samples were withdrawn through a hypodermic syringe and replaced with the same volume of pre-warmed fresh buffer solution to maintain a constant volume of the receptor compartment. The samples were analyzed spectrophotometrically at 219 nm

All the five batches of propranolol hydrochloride microspheres were tested for stability. The preparations were divided into 3 sets and were stored at 4° (refrigerator), room temperature and 40° (thermostatic oven). After 15, 30 and 60 d drug content of all the formulations was determined by the method discussed previously in entrapment efficiency section. In vitro release study was also carried out of the best formulation.

Gelatin A microspheres were prepared by using gelatin A alone and with different concentrations of chitosan with an intention to increase the mucoadhesion. Chitosan solutions of strengths 2 to 8% were tried. It was found that formulation of microspheres with more than 4% chitosan is not possible due to drastic increase in the viscosity followed by saturation of chitosan in 0.1% (v/ v) glacial acetic acid solution. The prepared microspheres were treated with Glycine solution to block unreacted glutaraldehyde. The maximum yield was found to be 85.12% for MS5 (Table 1).

The mean size range of the all five batches of microspheres was estimated between 1-50 μm (fig. 1 and Table 2), which are suitable for intranasal administration. It was observed that as the amount of drug increased in the microspheres, the particle size also increased proportionally. Incorporation of chitosan yielded larger microspheres (fig. 2, D and E) this might be due to the more viscous nature of chitosan than gelatin, which brings about poor emulsification leading to the formation of larger globules of dispersed phase. The shape of the all five batches of microspheres was found to be spherical. 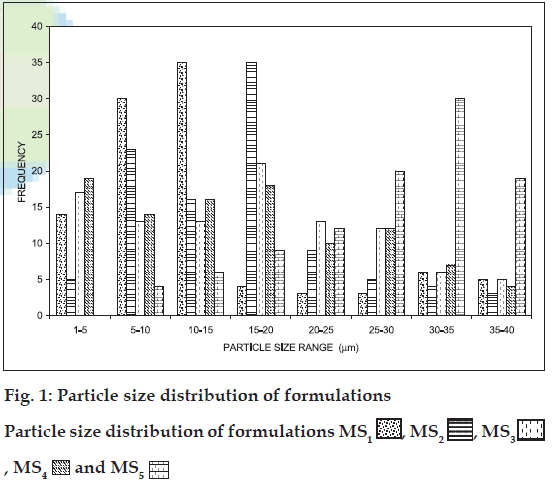 Scanning electron microscopic (SEM) analysis of the samples (fig. 2) revealed that all microspheres prepared were spherical in shape. Formulation MS1 (A), MS2 (B) and MS3 (C) were found to be slightly rough surfaced and formulation MS4 (D) and MS5 (E) were relatively smooth and uniform which is suitable for intranasal administration. The results of in vitro bioadhesion carried out by everted sac technique showed that all the prepared microspheres have good mucoadhesive property (Table 2). Addition of chitosan to the formulation produced further increase in the mucoadhesion. This may be due to formation of secondary chemical bonds such as hydrogen bond or ionic bond or ionic interactions between the positively charged amino groups of chitosan and the negatively charged Sialic acid residue of mucus glycoproteins or mucins. Sialic acid carries a net negative charge and providing strong electrostatic interaction between mucin and chitosan. Formulation MS5 showed maximum mucoadhesion.

The release pattern of all the formulations appears to be slow release with negligible burst effect. The burst effect corresponds to the release of the drug located on or near surface of the microspheres or release of poorly entrapped drug. The slow release period may be due to the medium being diffused in to the polymer matrix and the drug diffusing out of the microspheres. Cumulative percent drug release after 12 h is shown in fig. 3. Kinetic values obtained for different formulations are indicated in Table 3. 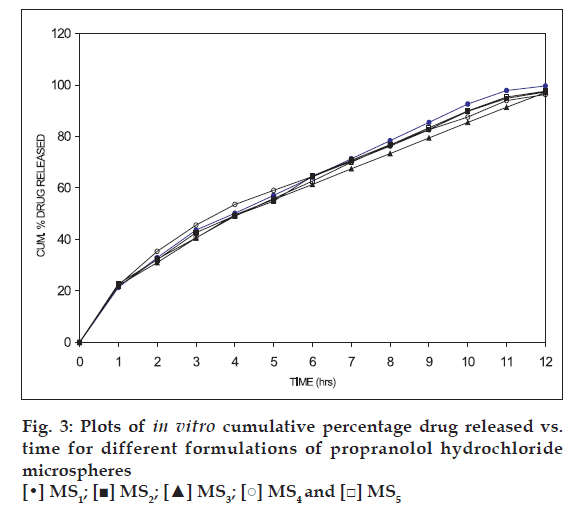 Based on the highest regression values (r) the best-fit model for MS1, MS2 MS3 and MS4was Peppas and MS4 was Higuchi matrix. Further the ‘n’ values for the MS1, MS2, MS3, and MS5 are 0.6237, 0.6011, 0.5990, and 0.6180, respectively. This indicates that the release mechanism followed non-Fickian diffusion. Further the in vitro diffusion study of MS4 using sheep nasal mucosa revealed the controlled release of drug (fig. 4). 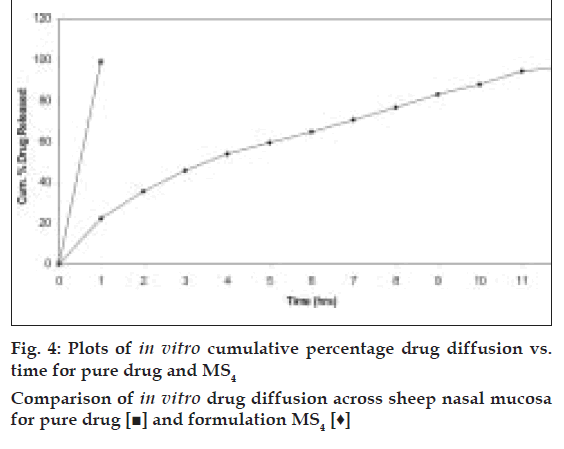 The stability studies showed that there was no change in the appearance of the microspheres indicating that the formulations were physically stable at all the conditions to which they were exposed. It was observed that there was slight reduction in the drug content of microspehres which were stored at 400 after storage for 60 d and no change in drug content of the formulations stored at room temperature and at 4°.

In vitro release studies revealed that the formulation stored at 4° showed 96.64% release. The one which was stored at 40° showed 97.13% and room temperature batch showed 97.66% release after 12 h. These results indicate that there was no significant change in drug release from all the formulations.