Targeted delivery of drugs to colon has the potential for local treatment of a variety of colonic diseases. The main objective of the study was to develop a multiparticulate system containing chitosan microspheres for the colon targeted delivery of ondansetron for the treatment of irritable bowel syndrome. This work combines pH-dependent solubility of eudragit S-100 polymers and microbial degradability of chitosan polymers. Chitosan microspheres containing ondansetron were prepared by emulsion cross linking method. The effect of process variables like chitosan concentration, drug-polymer ratio, emulsifier concentration and stirring speed were studied on particle size and entrapment efficiency of chitosan microspheres. In vitro drug release studies in simulated gastro intestinal fluids showed a burst drug release pattern in the initial hour necessitating microencapsulation around the chitosan microspheres. The optimized formulation was then subjected to microencapsulation with eudragit S-100 by solvent evaporation technique. The effect of different coat/core ratio on particle size, drug entrapment efficiency and in vitro drug release were studied. Formulation which contain 1:10 core/coat ratio released lesser amount of drug in the upper gastro intestinal conditions and so selected as best formulation and then subjected to in vitro drug release studies in presence of rat ceacal contents to assess biodegradability of chitosan microspheres in colon. In order to study the drug release mechanism in vitro drug release data was fitted into various kinetic models. Analysis of regression values suggested that the possible drug release mechanism was Peppas model.

Oral colon-targeted drug-delivery systems have recently gained importance for delivering a variety of therapeutic agents for both local and systemic administration. Targeted delivery of drugs to colon has the potential for local treatment of a variety of colonic diseases such as irritable bowel syndrome (IBS), colorectal cancer and inflammatory bowel diseases (IBD) that includes both ulcerative colitis and Crohn’s disease. Apart from this local treatment, colon is used for the systemic absorption of proteins and peptides because of the less hydrolytic hostile environment in comparison with stomach and small intestine as well as the existence of specific transporters. Also colon is a good site for those drugs where a delay in drug absorption is required from therapeutic point of view e.g. in case of nocturnal asthma, arthritis, cardiac arrhythmias which are effected by circadian biorhythms [1]. Additionally, the colon is a highly responsive site for the absorption of poorly absorbable drugs [2]. By this colon targeted drug delivery it is also possible to prevent the side effects of drugs on healthy tissues and enhancement of drug uptake by targeted cells. The dose can be reduced thus decreases the toxicity and cost if the active drug is costly.

Multiparticulate approaches include formulations in the form of pellets, granules, beads, microparticles and nanoparticles. Recently, much emphasis is being laid on the development of multiparticulate dosage forms in comparison to single unit systems because of their potential benefits like increased bioavailability, reduced risk of systemic toxicity, reduced risk of local irritation, predictable gastric emptying and retained in the ascending colon for a relatively long period of time. Because of their smaller particle size as compared to single unit dosage forms these systems are capable of passing through the GI tract easily, leading to less inter- and intra subject variability. Moreover, multiparticulate systems tend to be more uniformly dispersed in the GI tract and also ensure more uniform drug absorption [3]. Single unit colon targeted drug delivery system may suffer from the disadvantage of unintentional disintegration of the formulation due to manufacturing deficiency or unusual gastric physiology that may lead to drastically compromised systemic drug bioavailability or loss of local therapeutic action in the colon.

5-HT3 receptors are thought to be involved in the regulation of gastrointestinal motor function through its action on nerve receptors within the enteric nervous system and in the modulation of visceral sensory function. Ondansetron, a 5-HT3 receptor antagonist appears to reduce visceral sensitivity and have inhibitory effects on motor activity in the distal intestine and may have a wider application in the prophylaxis and treatment of nausea and vomiting. It has been demonstrated that ondansetron is well absorbed in the intestinal segments including the upper small intestine, the colon and the rectum. In a randomized, double blind cross-over placebo controlled study of ondansetron 16 mg tid, patients with IBS experienced significantly fewer daily episodes of pain while on ondansetron. Ondansetron caused firmer bowel movements [4]. Targeting of ondansetron to the colon may provide adequate treatment for IBS and allow a reduction in dosage and possible systemic side effects [5].

Successful targeted delivery of drugs to the colon via the gastrointestinal tract requires the protection of a drug from degradation, release and/or absorption in stomach and small intestine and then ensures abrupt or controlled release in the proximal colon [3]. This might be achieved by the use of specially designed drug delivery system (DDS) that can protect the drug during its transfer to colon. In this work, a multiparticulate system of ondansetron for the treatment of irritable bowel syndrome was developed by utilizing the pH-dependent solubility of Eudragit S-100 polymers and microbial degradability of chitosan polymers. Ondansetron-loaded chitosan microspheres were prepared, which is then microencapsulated with eudragit S-100 polymer. This polymer shows the solubility at or above pH 7. So that the microencapsulated system become soluble at this pH and releases the chitosan microspheres. The microbial degradation of the chitosan microspheres in the colon releases the drug in the targeted site.

The chitosan microspheres were prepared by emulsion cross-linking method. Chitosan solution was prepared in aqueous glacial acetic acid by over night stirring in a magnetic stirrer. The drug was dispersed in this solution and mixed well. Resultant mixture was then injected through a syringe into 20 ml of oil phase containing Span 80 and stirring was performed by mechanical stirrer at 1500 rpm to form w/o emulsion. Oil phase was a mixture of heavy and light liquid paraffins. After 30 min homogenization period toluene-saturated gluteraldehyde was added to it stage by stage. It was then left for stabilization and cross-linking for a period of 7 h. Microspheres thus obtained were centrifuged at 4000 rpm and the sediment was then washed with petroleum ether and acetone and then dried in a hot air oven at 50°.

The particle size of all the microspheres were evaluated using optical microscope fitted with a calibrated eyepiece micrometer. The average particle size was determined by the Edmondson's Eqn [6]. The shape and surface morphology of the chitosan microspheres was studied using a Jeol JSM-6390 scanning electron microscope (Jeol, Tokyo, Japan).

Microspheres were accurately weighed and triturated with methanol and kept over night for extraction of drug for the determination of entrapment efficiency. After filtration and appropriate dilution with methanol the absorbance was measured with UV/Vis spectrophotometer (Spectroscan 2600, Chemito, India) at 302 nm. 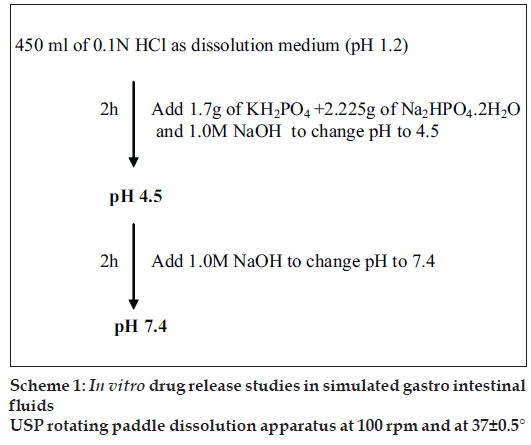 After the microencapsulation the eudragit S-100 microencapsulated chitosan microspheres were evaluated for the particle size, shape, surface morphology, percentage yield, entrapment efficiency and in vitro drug release in simulated gastro intestinal fluids. Additionally in vitro drug release studies in presence of rat caecal contents were carried out to assess the biodegradability of chitosan by colonic bacteria.

In vitro drug release studies in the presence of rat caecal contents [9,10]

Before starting the experiments on animals, the experimental protocol was cleared by the Institutional Animal Ethical Committee (IAEC/MGU/CHE-M. pharm/001/2008 dated 04/03/2008). Four Wistar rats of body weight (150-200 g) with no prior drug treatment, were used for all the present ex vivo studies and maintained on normal diet, and administered 1 ml of 2% dispersion of chitosan in water, and this treatment was continued for 7 days in order to induce the enzymes that specifically act on the chitosan. Thirty minutes before starting the study, each rat was sacrificed and the abdomen was opened. The caecum was traced, legated at both ends, dissected, and immediately transferred into phosphate buffered saline (PBS) pH 6.8, which was previously bubbled with CO2. The caecal bag was opened; the contents were weighed, homogenized, and then suspended in simulated intestinal fluid of pH 7.4 to give the desired concentration of 2% caecal content, which was used as simulated colonic fluid. The experiment was carried out with a continuous supply of carbon dioxide into the dissolution media. Drug release studies for first 4 h were performed as described under section describing In vitro drug release studies in simulated gastro intestinal fluids. After 4 h the release studies were carried out in simulated intestinal fluid containing rat caecal content. Aliquots of samples were withdrawn periodically and replaced with fresh buffer bubbled with carbon dioxide. The samples were filtered through a Whatman filter paper, and drug content was determined spectrophotometrically. The in vitro drug release studies of D1-D5 formulations in simulated gastro intestinal fluids showed a burst release pattern in the initial hour (fig. 2). A high burst release of 68.40±1.86% was observed from the formulation D1, which contain 1:2 drug polymer ratio; whereas a less burst release of 43.71±1.28 was observed from D5. These results indicated that formulation with lesser drug–polymer ratio shows higher drug release. Within 4 h 70-90% of drug was released from the formulations D1-D5. This type of high drug release in stomach and small intestine is not satisfactory for a formulation, which is supposed to release its contents in the colon. The burst release may be due to solubility of chitosan in the acidic pH. In order to prevent the drug release in stomach and small intestine these chitosan microspheres were encapsulated with Eudragit S-100, which shows solubility at a pH ≥7. Since D5 formulation showed high drug loading and drug release pattern, it is selected for microencapsulation process. 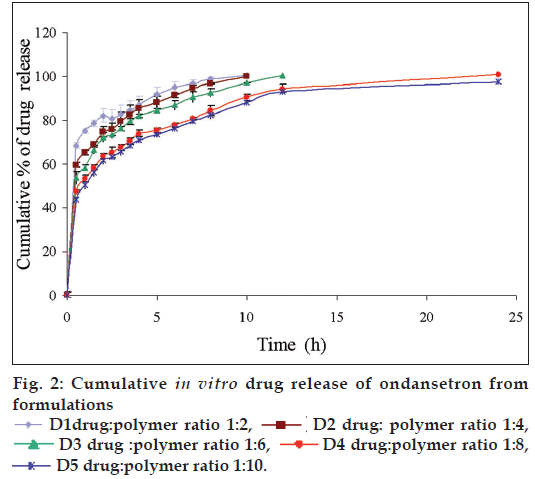 Figure 2: Cumulative in vitro drug release of ondansetron from formulations 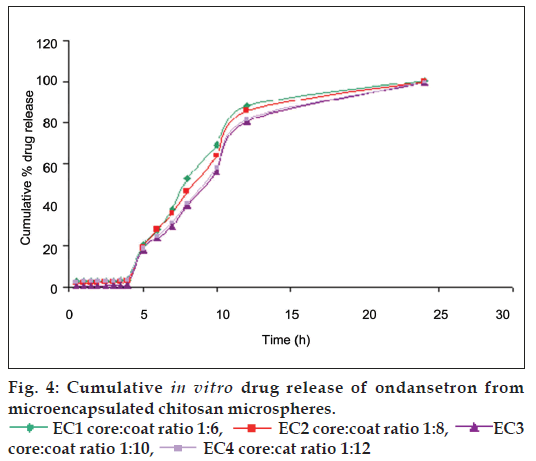 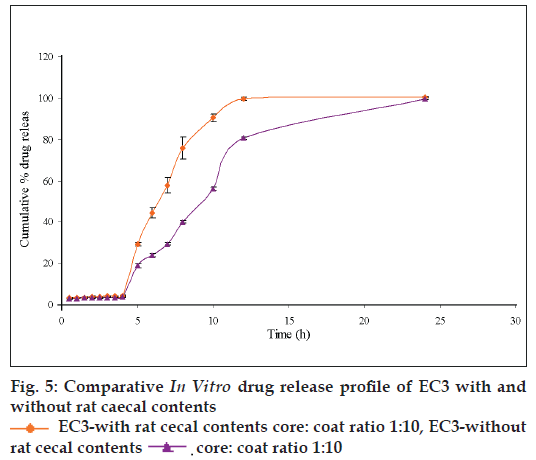 Figure 5: Comparative in vitro drug release profile of EC3 with and without rat caecal contents

Since EC3 was the best formulation drug release mechanisms were determined by fitting in vitro drug release data to various the kinetic models. The curvilinear nature of the cumulative percentage drug released vs time plot suggests that EC3 formulation does not follow zero order drug release kinetics. This was again confirmed by poor correlation coefficient value when compared to other kinetic models. By comparing correlation coefficient values for first order, Higuchi model and Peppas model EC3 formulation gave good fit to the Korsmeyer- Peppas model. Since the diffusion exponent (n) value was greater than 1, the drug release follows super case II transport. This model is used to analyze the release of pharmaceutical dosage forms when the release mechanism is not well known or when more than one type of release phenomena was involved.