Naringin is a plant flavonoid of huge medicinal importance. It is synthesized by the phenylpropanoid pathway via seven enzyme catalysed steps from phenylalanine to prunin. The genes encoding the enzymes of phenylpropanoid pathway have been cloned and characterized. Naringin has been known to possess antioxidant, antiinflammatory and antitumer potential. Exposure to naringin in vivo and in vitro in several test animals and cell lines has been reported to demonstrate activities that could treat asthma, hyperlipidemia, diabtetes, tumor, hyperthyroidism and osteoclastogenesis. Based on the reported research of naringin on test animals, naringin could be regarded as an efficient natural remedy for the treatment of human metabolic disorders. However, detailed exploration of naringin exposure on humans needs to be studied.

Naringin is a plant flavonoid of great human value. Flavonoids are ubiquitous polyphenolic secondary metabolites isolated from vascular plants[1]. They have a general structure of 15-carbon skeleton that contains two phenyl rings A, B and a heterocyclic ring C[2]. Flavonols are the most important flavonoids participating in the stress responses of plants[3]. Approximately 8000 flavonoids have been identified from various citrus fruits, vegetables and beverages[4]. They behave as chemical messengers, pollinator attractants and stress regulatory elements of plants[5]. Flavonoids also exhibit human health promoting abilities like antioxidant and free radical scavenging potential[6]. They act as antiviral, antibacterial, antiinflammatory, vasodilatory, anticancer and antiischemic agents[7-12]. Flavonoids can undergo various metabolic transformations such as methylation and sulfation to change their structures and hence their biological activities[13].

The biosynthesis and accumulation of flavonoids is site-specific. Flavonoids are localized in the nucleus, vacuole, cell wall, cell membrane and cytoplasm of the plant cells[14-16]. Further, the site specificity of flavonoids in plants is related to their typical physiological, biochemical or morphological traits. The alfalfa seeds have been reported to possess quercetin, luteolin and 7,4′-dihydroxyflavone flavonoids. The stem and roots, however accumulated isoflavonoids, medicarpin 3-O-glucoside-6-O-malonate, formononetin 7-O-glucoside-6″-O-malonate and coumestrol glycosides[14]. The Betula pendula and B. resinifera plants originating from Finland, Germany and Alaska have also been reported to accumulate flavonoids, condensed tannins and hydroxycinnamic acid only in the leaves on exposure of UV-B radiations. However, the plants belonging to Alaska showed highest flavonoid accumulation[15]. Likewise, various forms of soluble flavonoids are predominantly present in grape seeds, white clover and fruit berries. A detailed description of accumulation and transport of distinct flavonoids of grapevine has already been extensively discussed[16-18]. Hence, flavonoids are ubiquitous but site specific in nature.

Naringin is an important water soluble flavonoid isolated from the citrus fruits[19]. It has a molecular weight of 580.4 g/mol and molecular formula is C27H23O14 (figure 1). It has antioxidant potential and plays an important role in the development of leaves, flowers, buds and fruits of plants. It has further induces bitterness to the fruits as in grape fruit. However, the bitterness can be reduced upon reduction by the enzyme naringinase[20].

Figure 1: Molecular structure of naringin
Naringin has a molecular weight of 580.4 g/mol and a molecular formula of C27H23O14. It is a water soluble antioxidant compound The PAL gene encoding enzyme has been isolated from a wide range of plant species. In Epimedium, EsPAL was reported to significantly regulate the metabolite flux of phenylpropanoid pathway for the biosynthesis of various metabolites including icariin, epimedin A, B and C[24]. SsPAL1 from ornamental plant Coleus, Solenostemon scutellarioides was characterized to be stress responsive because of the presence of cisacting elements[25]. The PAL gene has also isolated and sequenced from three Buckwheat species, Fagopyrum tataricum, F. esculentum and F. dibotrys[26]. A biotic stress responsive 2145 bp long HbPAL has also been characterized from rubber[27]. Similarly, PAL has been reported to be cloned and characterized from various plants including Salix, Capsicum, Musa acuminate and rice[28-31]. Like higher eukaryotes, 2114 bp long TcPAL has also been characterized from yeast Trichosporon cutaneum[32]. Hyun et al. describes various PAL genes isolated and characterized from plants and fungi[33].

C4H belongs to the P450 monooxygenase super family localized in the endoplasmic reticulum of plants[34]. It is involved in the detoxification of herbicides as well as pesticides[35]. Most recently, BnGC4H gene has been characterized from ramie (Boehmeria nivea) to be strongly expressed in mature xylem suggesting its role in lignin biosynthesis[36]. Likewise, abiotic stress responsive GbC4H isolated from Ginkgo biloba was characterized to possess recognition sites for stress responsive transcription factors GT-1, WRKY transcription factor and myeloblastosis family transcription factor/Myc[37]. Recently, PaC4H, MpC4H1 and MpC4H2 showing catalytic activity towards transcinnamic acid have been isolated from bryophytes, Plagiochasma appendiculatum and Marchantia paleacea, respectively[38]. Abiotic stress inducible C4H genes have also been characterized from tea and sweet potato[39,40]. Similarly, C4H gene has been isolated and characterized from several plant species[41,42].

The 4CL mediated catalysis is the last crucial step of phenylpropanoid metabolism[22]. The 4CL gene has been characterized from various plants[43,44]. The cytosol specific putative four 4CL genes has been reported from Peucedanum praeruptorum, out of which only Pp4CL1 showed root specific catalytic activity for p-coumaric acid[45]. A 4CL homolog Pa4CL1 from liverwort Plagiochasma appendiculatum was characterized to possess 4-coumaroyl: CoA-ligase activity in E. coli[46]. The 4CL isoform homologues 4CL1- 4CL4 characterized from Arabidopsis thaliana showed phylogenetic closeness but distinct functionality. The 4CL1 showed significant role in lignin biosynthesis while 4CL3 was responsible for flavonoids biosynthesis[47].

CHS is the first regulatory enzyme as it diverts phenylpropanoid to diverse flavonoid biosynthesis[48]. Five stress responsive MaCHS genes isolated from cytoplasmic fractions of mulberry has revealed the abundant accumulation of MaCHS1, MaCHS2 in fruits, MaCHS3, MaCHS5 in old leaves and MaCHS4 in root bark[48]. Likewise, environmental stress responsive NtCHS genes has also been characterized from vegetative and floral tissues of tobacco[49,50]. The MdCHS isolated from apple was validated for polyketide synthase activity leading to the synthesis of phloretin, naringenin chalcone, and pinocembrin chalcone[48]. The functional validation of SoCHS isolated from Syringa oblate in tobacco has identified it as flavonoid metabolism regulator[51]. Several reports of CHS characterization from plants have been documented[52,53].

CHI importantly regulates the intramolecular stereospecific cyclization of chalcones into (S)- flavanones. The characterization of CHI from various plant species has been reported[54,55]. The DaCHI1 isolated from Deschampsia antarctica has shown enhanced substrate specificity for naringenin chalcone than isoliquiritigenin. The multi-substrate acting potential of DaCHI1 facilitated flavonoids production during oxidative stress and environmental variability[56].

The CHI gene isolated from Chinese water chest nut was characterized for maximum activity at 45° and pH 7.5 in presence of Ca2+ and Cu2+[57]. The characterization of SlCHI1 from wild tomato has revealed a probable metabolic link with terpenoid biosynthesis[58]. Similarly, snapdragon AmCHI1 was characterized to regulate the metabolite flux of flavonoids biosynthesis towards aurone and non-aurone flavonoids[59,60].

Naringin appeared to possess diverse activities such as antioxidant, antiinflammatory, anticancer and antiapoptotic[65]. Its pharmacological effects have been well validated through in vitro and in vivo animal studies. However, its effect on human health is still unknown[66]. The various therapeutic applications of naringin are described hereafter (Table 1).

Effect of naringin on ischemic reperfusion injury of animals:

Effects of naringin on metabolic syndrome: 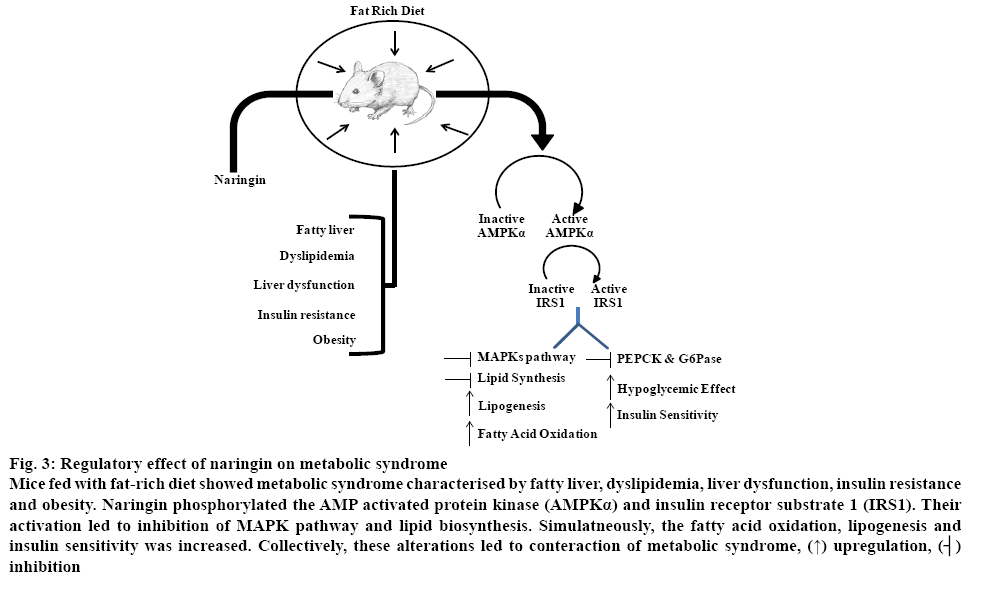 The ability of naringin to regulate glucose, fatty acid and cholesterol metabolism was responsible for its antidiabetic potential towards hyperglycaemic and extremely obese C57BL/KsJ mice as shown in figure 4 [89]. Naringin reportedly, enhanced the expression of angiopoietin-1 and collagen-1 promoting angiogenesis and inhibited apoptosis in the foot ulcers of diabetic rats[90]. Likewise, naringin normalized cardiovascular dysfunction including systolic blood pressure and ventricular diastolic dysfunction of male Wistar rats fed on high carbohydrate and fat diet[91]. Awassi male lambs pre-treated with antigen phytohemagglutinin (PHA) exposed to naringin showed accumulation of increased titres of antibody against PHA antigen compared to non-treated lambs. Further, the activity of antioxidant enzymes and weight of naringin-treated lambs was increased. Hence, naringin has enhanced the immune responses of lambs in addition to improvement in the other evaluation parameters[96].

Promotion of bone formation and maintenance: The potential of naringin to regulate neurodegenerative disorders has been revealed[107-110]. Naringin reportedly upregulated brain-derived neurotrophic and vascular endothelial growth factor followed by inhibition of neural apoptosis to alleviate spinal cord injury[108]. Role of naringin on the prevention of Parkinson’s disease has also been documented[109]. Further, naringin enhanced glia-derived neurotrophic factor and suppressed TNF-α to regulate the symptoms of Parkinson disease in rat models[110].

Hyperthyroidism induced by L-thyroxine (L-T4) in rats has been documented to be regulated by the exposure of naringin[122]. The free radical scavenging potential of flavonoids, naringin, rutin and hesperidin regulated hyperthyroidism without any risk of hepatotoxicity[123].

Hence in view of the reports documenting the multifarious medicinal applications of naringin, naringin containing food products can be recommended as a probable supplementation to the existing treatments for various disorders as well as maintain human health. Naringin could be used as a natural therapeutic supplement along the treatment line to alleviate several medical disorders and alterations. Studies have reported the underlying mechanism of naringin action on animal cell lines. However, detailed understanding of molecular and biochemical aspects of naringin exposure can extrapolate its medicinal applications on humans as well. Further, better understanding of the phenylpropanoid pathway will reveal the scope of synthesis and regulation of naringin in vitro as well as in vivo.

PS acknowledges DST for research fellowship. PG is very thankful to DST SERB, GOI for financial support in the form of Project YSS/2015/000719.