Ondansetron is a serotonin receptor antagonist used in the management of nausea and vomiting that is associated with cancer chemotherapy. There is a need for intranasal delivery due to poor bioavailability of drug because of first pass effect. The objective of this study was to develop an intranasal delivery system of ondansetron hydrochloride using thermo-sensitive polymer PF127 and mucoadhesive polymer hydroxypropylcellulose. Due to increase in bioadhesive polymer concentration, there was increase in bioadhesion strength, at the same time there was decrease in the spredability. An in vitro diffusion study revealed that viscosity of the vehicle has an influence on drug. The release of ondansetron hydrochloride from the gel matrix showed diffusion- controlled.

Ondansetron hydrochloride is a serotonin (5HT3) receptor antagonist used in the management of nausea and vomiting that is associated with cancer chemotherapy. There is a need for intranasal delivery due to poor bioavailability of drug because of first pass effect [1]. The objective of this study was to develop an intranasal delivery system of ondansetron hydrochloride using thermo sensitive polymer PF127 and mucoadhesive polymer.

Nasal formulations consisting of aqueous gels of PF127 containing 18% (w/v) of polymer were prepared using the method described by Schmolka [2]. Composition was given in Table 1. The prepared formulations were evaluated for appearance, clarity, pH, gelation temperature, spredability, bioadhesion strength, viscosity, drug content and diffusion study. Gelation temperature (TG) was measured by visual inspection using a modifi cation of Miller and Donavan technique [3]. Rheological studies were performed using a Brookfield digital CAP 2000+ viscometer to determine viscosity. Spreadability in terms of flow ability of various mucoadhesive thermoreversible gels was determined [4]. The bioadhesive potential of each formulation was determined by measuring the weight required to detach the formulation from nasal mucosal tissue using a method described by Yong et al. [5].

Table 1: The Formulae for the Preparation of In Situ Nasal Gels with Varying Concentration of Hydroxylpropylcellulose

In vitro release studies were carried out in the following manner

A glass cup with a cross-sectional area of 7.5 cmnd and adhesive tape, and inverted under the surface of 500 ml of simulated nasal fl uid of pH 5.5 at 35±0.5° in USP XXIII Type I Dissolution Test Apparatus with a speed of 50 rpm. Five millilitres of aliquots were withdrawn at specifi ed time intervals and immediately replaced with fresh dissolution medium [6]. The drug content in the withdrawn samples was determined spectrophotometrically at 310 nm using a UV/Vis spectrophotometer and simulated nasal electrolyte solution as a blank.

All gels were glassy clear in appearance. Gel pH was in the range of 5.3 to 5.6 which was in the range of pH at the absorption site (4.5-6.5). In the preliminary studies, the minimum concentration of PF127 that formed gel below 340 was found to be 18% wt/vol. The plain formulation (F1) without bioadhesive polymer has minimum bioadhesion 529.2 dyne/cm2 but maximum spredability and 88.2% drug release after 8 h. In all formulations 0.2% w/v bioadhesive polymer showed maximum spredability while 0.7% w/v showed minimum spredability (Table 2). There was drastic increase in viscosity at gelation temperature (Table 3, fi g. 1). It was observed that the concentration of bioadhesive polymer increased from 0.2% to 0.7% showed retardation of ondansetron hydrochloride release from 75.2% to 54.9% (fi g. 2).

Table 2: Chracteristics of all Formulations 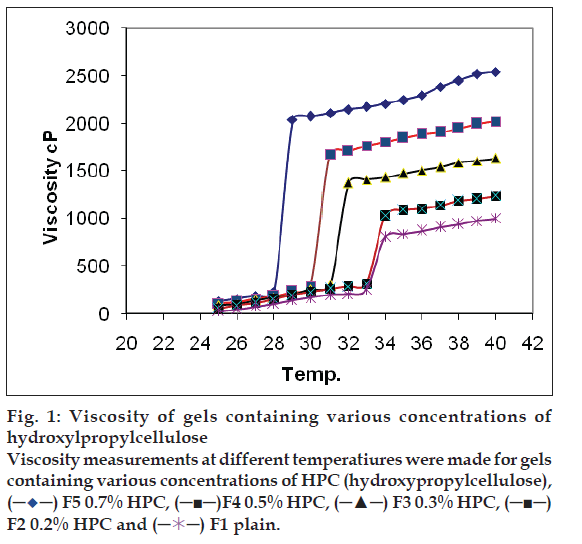 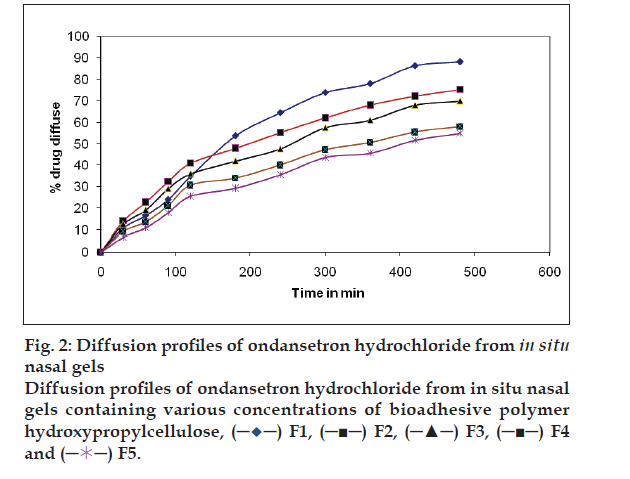 We would like to thank Dr. Reddy?s Lab. and Signet Chemicals for supplying drug and polymer samples respectively.