Preparation of mucoadhesive nasal gel of sumatriptan succinate [4] and evaluation

The nasal mucosa was separated from underlying muscular and part of the connective tissue with forceps and scissors. The fresh tissue was kept at 34o in phosphate buffered saline (PBS) pH 6.4 upon removal. Mucosa was used within 45 min of separation. Franz diffusion cell was used for this purpose. Receptor compartment contained 21 ml of pH 6.4 phosphate buffer while donor compartment was filled with 3 ml distilled water. The solution was placed in donor compartment and aliquots were removed at time intervals of 15, 30, 45, 60, 75, 90, 105, 120 min from the receptor compartment while the solution was being stirred continuously using magnetic stirrer, replacing it with fresh medium each time. The experiment was carried out at 34o. The amount of drug permeated was assayed using HPLC method of analysis. The graph of %drug permeated v/s time was plotted and flux, permeability coeffi cient and enhancement ratio was determined.

Clear transparent mucoadhesive solution was formed with viscosity sufficiently low to administer in the nasal cavity with the help of dropper. The viscosity of the formulation was increased as temperature of the solution increased with gelation at nasal cavity temperature (340). The mucoadhesive strength of the formulation was found to be 10.5 g, which is suffi cient to improve the retention time of solution at nasal mucosa penetrate though the nasal mucosa without permeation enhancer but low permeation was observed due to low Log P value of 0.93. When 1% EDTA and 0.1% Tween 80 was used in formulation these was no significant increase in the permeation of sumatriptan succinate when tested by student’s t-test while formulation containing 1% bile salts showed slight increase in the permeation. The permeation was found to increase two times with 1% SLS with enhancement ratio of 1.72. 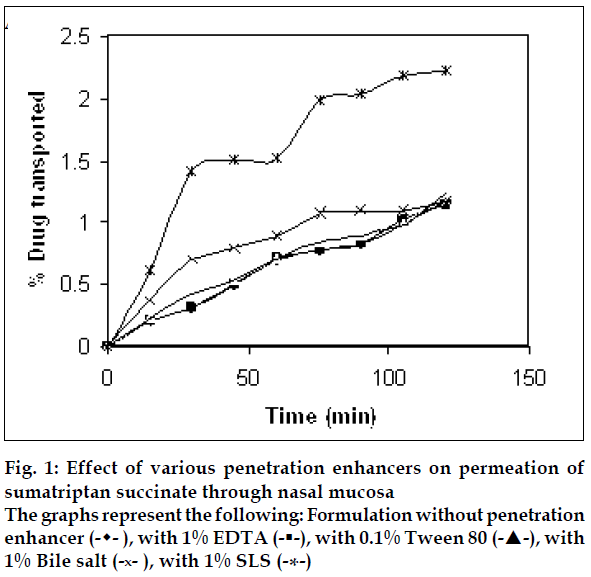