Simple, sensitive, and specific spectrophotometric methods were developed and validated for quantitation of diclofenac potassium and tizanidine in tablet dosage form. Three new analytical methods were developed based on the simultaneous estimation of drugs in a binary mixture without previous separation. In multiwavelength technique, the binary mixture was determined by mixed standards and three sampling wavelengths of 277 nm, 295 nm (isobestic point), and 320 nm. In simultaneous equation method, the drugs were determined by using the absorptivity values of diclofenac potassium and tizanidine at selected wavelengths, viz., 277 nm and 320.3 nm. The standard deviation value for the validation parameters was found to be between 0.08 and 0.68 for multiwavelength technique and between 0.069 and 1.23 for simultaneous equation method. The graphical absorbance ratio method was performed by absorbances at 277 nm, 295 nm (isobestic point), and 320.4 nm of their mixture. These three methods are simple, accurate, and rapid, and they require no preliminary separation and can therefore be used for routine analysis of both drugs in quality control laboratories.

Diclofenac potassium (DP) is potassium-[(2,6-dichlorophenyl)amino]-phenyl acetate. It is a potassium salt of an aryl acetic acid derivative [1-4]. It possesses analgesic, antiinflammatory, and antipyretic activity. It inhibits prostaglandin synthesis by interfering with the action of prostaglandin synthetase (cyclooxygenase) [5,6]. Tizanidine (TZD) is 5-chloro-N-(2-imidazolin-2-yl)-2,1,3-benzothiadiazol-4-ylamine [7]. Tizanidine is a rapidly acting potent central muscle relaxant. It is a central α2-receptor agonist. Its major site of action is the spinal cord, and it preferentially inhibits polysynoptic mechanisms responsible for excessive muscle tone, mainly by reducing the release of excitatory amino acids from interneurons. The drug doesn’t affect neuromuscular transmission [8].

Molecular absorption spectroscopy has been extensively used for the quantitative determination of drugs in pharmaceutical preparation as well as for the analysis of synthetic mixtures. The use of these techniques for pharmaceutical analysis have the inherent disadvantage that most active drugs absorb in the UV region and exhibit strongly overlapped spectra that impede their simultaneous determination.

As such, no spectrophotometric method for simultaneous estimation of diclofenac potassium and tizanidine combination has been reported, which prompted to pursue the present work. It was also planned to validate the developed methods as per ICH norms [9-14]. The objective of the present work is to develop and validate new analytical methods for simultaneous determination of diclofenac potassium and tizanidine in a binary mixture without separation.

An UV/Vis recording spectrophotometer (Shimadzu Model-UX160A) with ±0.5 nm (with auto wavelength correction 1 cm matched quartz cells) wavelength accuracy and 3 nm bandwidth was employed in the binary mixture determination. 2% dimethyl formamide (DMF) (analytical grade) was used as the solvent after considering the solubility factors of both the drugs as well as the interference due to excipient matrix present in tablet formulation. Reference standards (diclofenac potassium and tizanidine) of purity 98.50% to 101.5% were procured from Sun Pharmaceuticals Ltd., Baroda, India.

The utility of multiwavelength data processing programme is to calculate the unknown concentration of component of interest present in a mixture containing both a component of interest and an unwanted interfering component by the mechanism of the absorbance difference between two points on the mixture spectra is directly proportional to the concentration of the components of interest, independent of the interfering components. It involves the estimation of two components, each time considering the second one to be an interfering one. An important criterion for this method is the presence of some absorbance in the spectrum of interfering component, where the component of interest has its λmax. With such flexibility, the interference among the components can be dramatically reduced. The measuring wavelength can be spaced either equally of arbitrarily, depending on the measuring purpose. The number of measuring wavelengths ranges from the number of components (applicable when pure component samples are used) to the number of standard samples minus 1 (applicable when mixed standard samples are used).

This method of analysis is based on the absorption of drugs (X and Y) at the wavelength maximum of the other. The quantification analyses of DP and TZD in a binary mixture were performed with the following equations: Cx = (A2ay1–A1ay2)/ax2ay1–ax1ay2 (Eqn. 1), Cy = (A1ax2– A2ax1)/ax2ay1–ax1ay2 (Eqn. 2), where Cx and Cy are the concentrations of X and Y, respectively in the diluted sample, ax1 and ax2 are absorptivities of X at λ1 and λ2, ay1 and ay2 are absorptivities of Y at λ1 and λ2. The absorbance of the diluted samples at λ1 and λ2 are A1 (A1 = axibcx+ayibcy) and A2 (A2 = ax2bcx+ay2bcy), respectively. 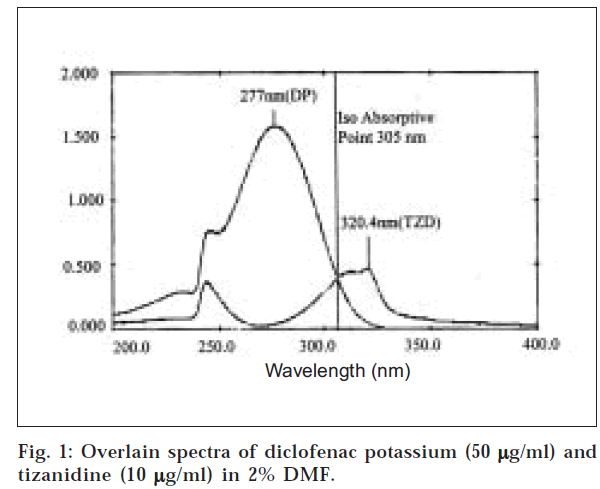 Twenty tablets (brand name-Tizaren, manufactured by Sun Pharmaceuticals Ltd.) were taken and their average weight was determined. They were crushed to fine powder containing the equivalent of 50 mg of DP was taken in 100 ml volumetric flask. The TZD present in this tablet powder was 2 mg, which could not be found out accurately due to low absorbance. Hence, to increase the accuracy, accurately weighed 8 mg of pure drug of TZD was added to the crushed tablet, which increased the amount of TZD to 10 mg. It was then dissolved in 2% DMF by intermittent shaking for 4-5 min. The volume was made up to 100 ml, and the solution was filtered through Whatman filter paper (No. 41). The filtrate was further diluted to get final concentration of 25 μg/ml of DP and 5 μg/ml of TZD.

To a pre-analyzed tablet solution having 25 μg/ml of DP and 5 μg/ml of TZD, a definite and different concentration of pure drug was added and then its recovery study was performed. This was repeated six times to emphasize validation, and the results are summarized in Tables 2 and 3. The results were calculated by using the formula: % Label claim = CxDxA/ Wx100/L (Eqn. 5), % Dissolved = CxDxWs/LxVmx100 (Eqn. 6), where C is concentration from standard curve, D is dilution factor, A is average weight of the tablet, W is weight of composite taken, Ws is weight in mg of respective standard and Vm is volume of dissolution medium.

SD is standard deviation, coeff. varn. is coefficient of variation

In the present work, three methods, namely, multiwavelength spectroscopy, simultaneous equation (Vierordt’s method), and graphical absorbance ratio method (Q – Analysis) were developed for the simultaneous spectroscopic estimation of diclofenac potassium and tizanidine in commercially available tablet dosage form using 2% DMF (pH from 6.3-6.8) solvent. From the overlain spectra of the two drugs, 277 nm and 320 nm were selected as the sampling wavelengths for diclofenac potassium at a concentration of 50 μg/ml and tizanidine at a concentration of 10 μg/ml, respectively (fig. 1).

The use of nine mixed standards and three sampling wavelengths of 277 nm (λmax of DP) 295 nm, and 320 nm (λmax of TZD) gave optimum accuracy, precision, time, economy, and sensitivity. The wavelengths used for graphical absorbance ratio method is 305 nm (isoabsorptive point) and 320.4 nm (λ max of TZD) (fig. 2). The proposed procedures were successfully applied to the determination of TZD and DP in the commercially available tablets dosage form, and the results are presented in Tables 2 and 3. The values of standard deviation for the validation parameters (linearity, accuracy, repeatability, intermediate precision, and reproducibility) of DP and TZD in tablet formulation were found to be between 0.08 and 0.68 for method A, 0.069 and 1.230 for method B, and 0.08-0.59 for method C. A critical evaluation of the proposed method was performed by the statistical analysis of the experimental data. In order to demonstrate the validity and applicability of the proposed methods, recovery studies were performed by analyzing synthetic mixtures of DP and TZD with different composition ratios. The percentage recoveries of TZD and DP from spiked excipients are summarized in Table 2.

The percentage recoveries were found to be 99.5-101%, 98-103% and 97-100% for methods A, B, and C, respectively, and the results presented in Tables 2 and 3 agreed with the labelled content. The relative standard deviations were found to be within the limit, indicating good accuracy, precision, and repeatability of the proposed methods.

The LOD and LOQ values for tizanidine were found to be least by the graphical absorbance ratio method – 0.3102 μg/ml and 0.9147 μg/ml, respectively; and in case of multiwavelength spectroscopic method for diclofenac potassium, it was 0.4239 μg/ml and 1.2846 μg/ml, respectively (figs. 3 and 4) (Table 4). 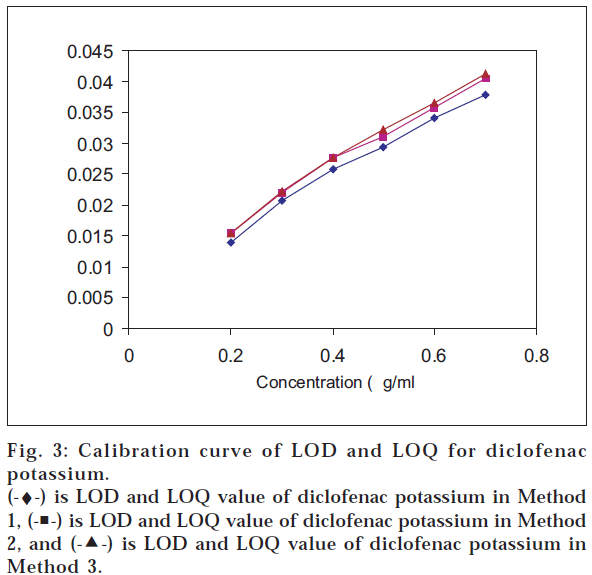 Fig 3: Calibration curve of LOD and LOQ for diclofenac potassium. 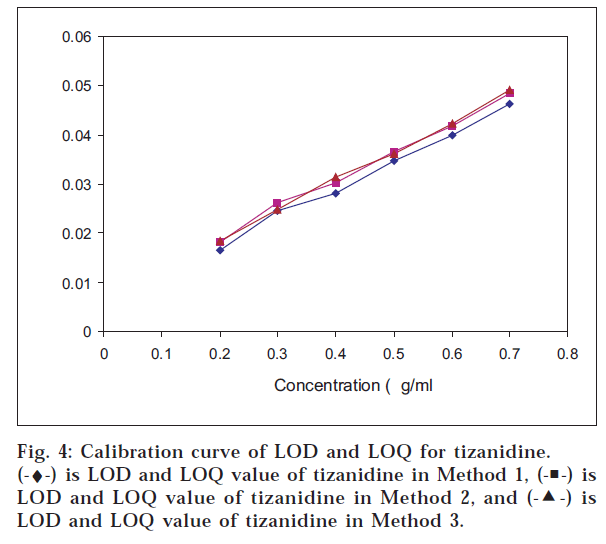 Fig 4: Calibration curve of LOD and LOQ for tizanidine.

LOD is limit of detection, LOQ is limit of quantitation, SD is standard deviation, coeff. varn. is coefficient of variation

With respect to the validation results obtained from the above developed methods, multiwavelength method is more accurate, precise, and simple, with limited errors. The simultaneous equation and graphical absorbance ratio methods are accurate and precise but require mathematical calculations, which make the work complicated. It can be said that the three methods described here are simple, accurate and could be used for rapid and reliable determination of diclofenac potassium and tizanidine in routine laboratory analysis.

Authors gratefully acknowledge Director, Shri G. S. Institute of Technology & Science, Indore, for providing the necessary facilities for undertaking the research work. Authors are grateful to the Ministry of Human Resource Development, New Delhi, for providing a research fellowship for this project.