Levofloxacin is a synthetic fluoroquinolone antibiotic available in different dosage forms for the treatment of various bacterial infections. Here in, we report the validated diffuse reflectance infrared Fourier transform spectroscopic method for quantitative analysis of levofloxacin in the solid dosage forms. This method offers the advantage of being eco-friendly that is applied for solid state samples. Appropriate quantities of levofloxacin and dry potassium bromide were mixed to get the desired concentration of samples for Fourier transform infrared spectroscopic analysis using a diffuse reflectance sampling interface. The peak in the Fourier transform infrared spectrum around 1724 cm-1 was observed for the carbonyl group of levofloxacin. The calibration curve was plotted for the area under the curve of carbonyl peak against the concentration of calibration standards. A linear calibration curve with a correlation coefficient of 0.999 was obtained in the range of 0.3-1.8 % w/w of levofloxacin. The calibration curve method was linear, precise and accurate as per guidelines. The method employed for quantification of levofloxacin in three marketed tablet dosage forms and laboratory physical mixture yielded a mean recovery of 101.32 and 98.11 percent by weight, respectively. Overall, the precision, accuracy and reproducibility of the proposed diffuse reflectance infrared Fourier transform spectroscopy method make it appropriate for quantitative analysis of levofloxacin in solid dosage forms.

Diffuse reflectance infrared Fourier transform (DRIFT) spectroscopy is a relatively newer IR technique that has shown potential for the quantification of solid samples [5,6]. DRIFT spectroscopic methodology has the advantages of being the least complex procedures involving simple sample preparation, eco-friendly solid state analysis and do not need the drug extraction procedure. Analysis of various drug samples using the DRIFT spectroscopic method is reported in the literature [7-15]. The USP describes the IR method for quantification of simethicone in bulk and pharmaceutical formulations [16].

Chemically, levofloxacin is the S enantiomer (Lisomer) of ofloxacin and has approximately twice the potency and substantially less toxicity than ofloxacin (fig. 1) [17]. Levofloxacin acts as an antibacterial against a wide range of bacterial pathogens. It inhibits deoxyribonucleic acid (DNA) gyrase in susceptible organisms resulting in the degradation of chromosomal DNA and interference with cell division and gene expressions [18]. Various analytical methods are reported for the estimation of levofloxacin in pharmaceuticals such as UV spectrophotometric [19-22], spectrofluorometric [23], HPLC [24-26], reverse phase (RP) HPLC [27], Reverse Phase ultra-performance liquid chromatography (RP-UPLC) [28], high-performance thin layer chromatography (HPTLC) [29] and voltammetry [30]. For the quantification of levofloxacin in bulk and pharmaceutical dosage forms, the liquid chromatography method is described in USP [31]. To the best of our knowledge, the Fourier transform infrared spectroscopy (FTIR) method using diffuse reflectance sampling technique for the quantitative analysis of levofloxacin in bulk or tablet dosage form was not available in the literature. Therefore, the objective of the present study was to develop and validate the solid state quantification method for levofloxacin in tablet dosage forms employing the DRIFT spectroscopic method. 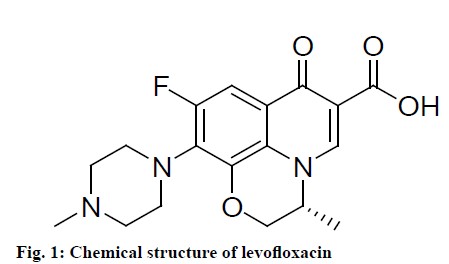 Method precision was assessed by intraday and interday repeatability. Three samples of 1.2 % w/w of levofloxacin were analyzed three consecutive times in the same day (d 1). For the same samples, analyses were repeated on d 3 (interday) to check the intermediate precision of the assay method.

A standard addition method for the recovery of pure drug from the excipients at three different levels (80, 100 and 120 % by weight) was used to check the accuracy of the assay method. Pure levofloxacin equivalent to 80, 100 and 120 % by weight of label claim were added to pre analyzed tablet powder (Brand 1). Samples appropriately 1.2 % w/w of levofloxacin in six replicates were prepared by dilution with dry KBr and analyzed.

Table 1: Composition of the Physical Mixture

For the quantification of levofloxacin in tablet formulation, three brands (Label claim 500 mg) available in the pharmacy were used. After determining the average weight, ten tablets were finely powdered. Six (around 1000 mg) samples containing approximate 1.2 % w/w levofloxacin were prepared by diluting the appropriate quantity of levofloxacin with dry KBr. All the samples were analyzed in three replicates and the percent recovery of levofloxacin was calculated using the following formula.

DRIFT spectroscopy is a well-known technique for the characterization and quantification of solid state samples. Since the organic compounds exhibit intense adsorptions peaks in the 4000-650 cm-1 region of the IR spectrum, it is possible to quantitatively analyze them using DRIFT spectroscopy. Fig 2: Reflectance spectra for the levofloxacin, a: neat drug; b: 10 % diluted drug in dry KBr 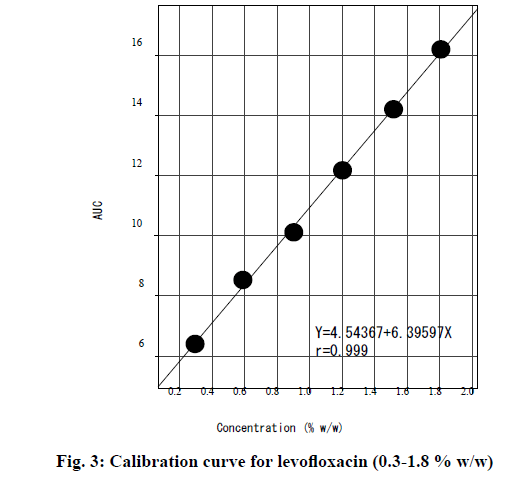 The linearity curve was prepared by plotting the mean AUC obtained for the carbonyl peak (around 1724 cm-1) for the diluted levofloxacin samples (0.5 to 2.0 % w/w in dry KBr) verses nominal concentrations (fig. 5). The regression equation for the linearity curve was “y=4.3995+6.3476x” with a coefficient of correlation of 1.0. This supports that in the concentration range of 0.5-2.0 % w/w the proposed method was linear. 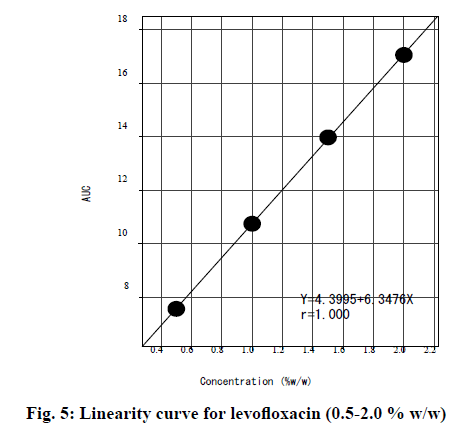 The coefficient of variation (percentage relative standard deviation (% RSD)) is used to express the precision, whereas the mean of standard deviation (SD) is used for the expression of the accuracy of an analytical method. The intraday and inter day precision study data for levofloxacin are shown in Table 3. For 1st d precision studies, the RSD (%) values for the three samples were observed in the range of 1.37-1.67 while for 3rd d precision studies, the range was 1.47-1.84. The intraday and inter day precision results were found to be satisfactory. The percentage RSD for the method was within the limit. There was no statistically significant difference between the results of 1st d and 3rd d analysis (t=0.057359, p=0.596).

The proposed method was intended to use for the quantification of levofloxacin in the solid dosage forms. When the excipients and the composition of the marketed formulation are not known, the laboratory physical mixture prepared from the commonly used excipient for tablet formulation may help in studying the interaction of excipients in the analysis. Hence, the proposed method was employed for the analysis of levofloxacin in the three different brands of marketed tablet formulations and the laboratory physical mixture (fig. 6). The average recovery of the levofloxacin in laboratory physical mixture was 98.11 % w/w (95 % confidence interval (CI)=94.8623, 101.3577), whereas that for the three pharmaceutical tablet formulations was in the range of 98.23-105.4 % w/w (M=101.32; 95 % CI=97.8958, 104.7442) of the label claim (Table 5). 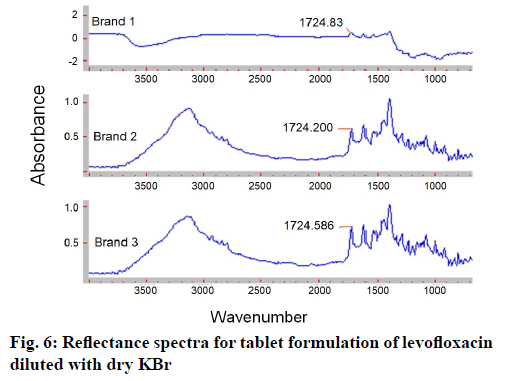 Levofloxacin from the three marketed formulations was recovered within the good agreement of the label claim and was within the acceptable limits of USP (not less than 90.0 % and not more than 110.0 % of the stated amount of the levofloxacin). The results of recovery studies supported that that there was no interference of excipients in the analysis, hence the proposed method may have the potential to serve for in house quality control of levofloxacin.

Analytical chemistry plays a significant role in the quality control and development of pharmaceuticals including assay method and validation. A validated analytical method is an official requirement of the drug approval process by various regulatory authorities and also it can be used for in house quality control. The proposed solid state validated DRIFTS method was precise, accurate with significant recovery of levofloxacin in tablet dosage formulation. The method may be employed for the quantification of levofloxacin in bulk and in solid dosage forms.