Nomogram for computing the value of similarity factor

The objective of present work was to construct nomogram for obtaining a value of similarity factor (f 2 ) by employing the values of number of observations (n) and sum of squared difference of percentage drug dissolved between reference (R) and test (T) products (Σni=1(Ri-Ti)2) The steps for rearrangement of equation of similarity factor are presented. The values of f 2 were selected in the range of 45 to 100 for 4 to 12 observations (n) for computing the values (Σni=1(Ri-Ti)2) of Linear regression analysis was performed between number of observations and (Σni=1(Ri-Ti)2) Perfect correlation was observed in each case. Nomogram was constructed and later it was validated by using drug dissolution data from literature and our laboratory. The use of nomogram is recommended during research and development work to investigate effect of formulation or process variables. The nomogram can also be used during change in manufacturing site or change in equipment. It is concluded that the steps for calculation of f 2 can be truncated in the middle (i.e. at the step of calculation of factor (Σni=1(Ri-Ti)2) and a decision of similarity/dissimilarity can be taken employing the nomogram.

The dissolution test is the most powerful performance test for solid oral dosage forms. Dissolution test is mainly used in the pharmaceutical industry for the measurement of batch-to-batch variability, i.e. for quality control purposes. The selected classical uses of the dissolution test include formulation and development work, selection of bio-batch, surrogate for in vivo test and establishment of in vivo in vitro correlation (IVIVC). The batch for bioequivalence study (biobatch) is selected considering the similarity of dissolution from reference and test products in multiple biorelevant dissolution media. The data for dissolution study and bioequivalence are generally demanded by FDA in ANDA applications.

A nomogram, a two-dimensional graph, is constructed to permit the approximate computation of a mathematical function. Most nomograms are used in applications where an approximate answer is appropriate and useful. Nomogram may also be used to check an answer obtained from an exact calculation method, i.e. for validation. In the present study, a nomogram is constructed for obtaining a value of similarity factor (f2).

FDA guideline mentions that twelve units each of test and reference products must be employed for computing similarity factor using the mean dissolution values at each sampling time. To allow use of mean data, the percent coefficient of variation at the earlier time points (e.g. 15 min) should not be more than 20% and at other time points should not be more than 10%.

As per EMEA guidelines, the evaluation of similarity is based on; (1) a minimum of three time points (zero excluded); (2) twelve individual values for every time points for each formulation; (3) not more than one mean value of greater than 85% drug dissolved for each formulation; (4) the standard deviation of the mean of any product should be less than 10% from second to last time points, and (5) in cases where more than 85% of the drugs are dissolved within 15 min, dissolution profiles may be accepted as similar without further mathematical evaluation [5].

Similarity factor can be used for dissolution profile comparison of formulations on switching over from one equipment to equipment. The impact of process variables can be examined by comparing dissolution profiles. The concept of quality by design is preferred by USFDA. The most integral parts of QbD are design of experiment (DOE) and design space. Singh and co-workers mentioned that DOE represent effective and cost-effective analytical tools to yield the optimal solution to a particular problem [6]. Singh and co-workers remarked that formulation by design is a holistic concept of formulation development aiming to design more efficacious, safe, economical and patient-compliant drug delivery system [7]. Flanner and co-workers used similarity and dissimilarity factors as dependent variables in D-optimal design [8].

In design of experiment (DOE), f2 or

can be selected as a response (dependent variable). The objective of undertaking present study was to simplify the calculation of similarity factor by terminating the calculations at an intermediate step. The Eqn. for similarity is as follows:

where f2 is similarity factor, n is number of observations, wi is an optional weight factor and Ri and Ti represents the percentage drug dissolved from reference and test formulations respectively at different time points.

In the present study percent drug dissolved at all sampling time points were treated as equally important and therefore equal weight was given to data set at each sampling time point (wi=1). The steps for rearrangement of the similarity factor are shown below: 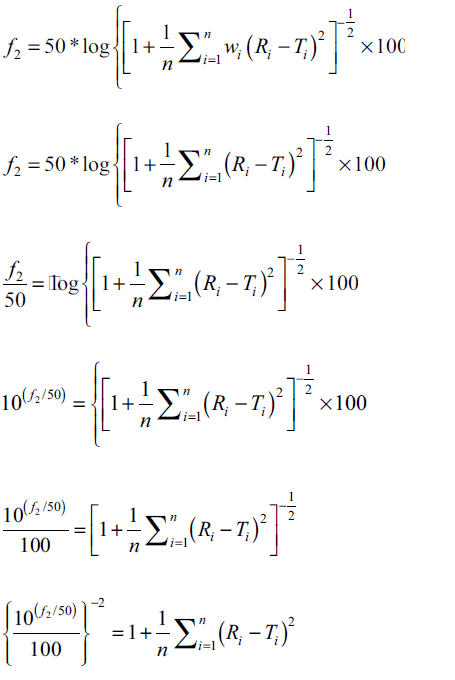 (D) and n. A diagrammatic representation of data is always easier to interpret and therefore an effort was made to generate nomogram by performing linear regression analysis between the number of observations and the sum of squared difference of percentage drug dissolved between reference and test products for the selected values of similarity factor (45 to 99.99). Figs. 1 and 2 show the nomogram. Two figures were drawn in place of one figure to improve readability of data. The value of correlation coefficient was unity in all the cases, indicating a perfect fit between the independent variable (n) and dependent variable Figure 1: Nomogram for computation of similarity factor (f2 = 80 to 99.9). The similarity factor can be obtained by intersecting the X axis (number of observations) and Y axis (sum of squared difference between R and T). Figure 2: Nomogram for computation of similarity factor (f2 = 45 to 75). The similarity factor can be obtained by intersecting the X axis (number of observations) and Y axis (sum of squared difference between R and T).

For validation of the concept, data of dissolution studies were picked up from literature [9-13]. The similarity factor, computed using Eqn. 1, was compared with that obtained from the nomogram in each case and it was confirmed that the nomogram can be used by scientist for calculation of similarity factor and for drawing conclusion of similarity/ dissimilarity between two dissolution curves. The results are depicted in Table 2.

and f2 were calculated using actual data, and Eqn. 1 respectively

are lower than the values stated above.

is known for n equal to 12. Similar tables can be constructed for different number of observations (n) using Eqn. 2.

is in between the contour lines of f2 equal to 50 and 65, it is concluded that the dissolution profiles are similar at 5 to 10% difference between reference and test products. However, if the computed value of

is within the inner enclosed geometrical area, the curves are similar at ≤5% level and the outer enclosed area indicate similarity at ≤10%. The dissimilar region is appropriately defined in the radar diagram. Figure 3: Radar diagram for similarity factor equal to 50 and 65. As the number of sampling time increases, the sum of squared difference between R and T increases.

The concept presented in the present work can find endless industrial applications demanding comparison of dissolution profiles. The concept of quality by design (QbD) and use of Design of Experiment (DOE) have become popular in recent time. The factor

(y-axis) and f2 (x-axis). A reasonable linearization (correlation coefficient=0.989) was achieved on using semi logarithmic plot for each observation (n=4 to 12). The values of slope and intercept can also be used for arbitrary calculation of similarity factor. If grid search technique is adopted with this approach, exact computation of f2 is not feasible as the value of correlation coefficient is less than one.

Two nomograms are presented in the present study for computation of similarity factor. The data for the construction of nomogram are presented in a grid form. The nomogram was successfully used to compute value of similarity factor for the data reported in literature. A lot of men hours can be saved in pharmaceutical industry if the expanded grid is prepared, once only, containing calculations for f2 from 0 to 100 with a step size of one unit. Moreover, the expanded grid can be used for the validation purpose for the calculations of similarity factor by regulators. The use of nomogram is recommended for novice as well as for the scientists who are running in short of time since the calculation steps for obtaining the value of f2 are truncated. The terminal steps for calculation of f2 (logarithm and square root functions) are eliminated, which necessitates the need of computers, time, accuracy in calculation and trained personnel. The simplified approach, proposed in present work, is user friendly.